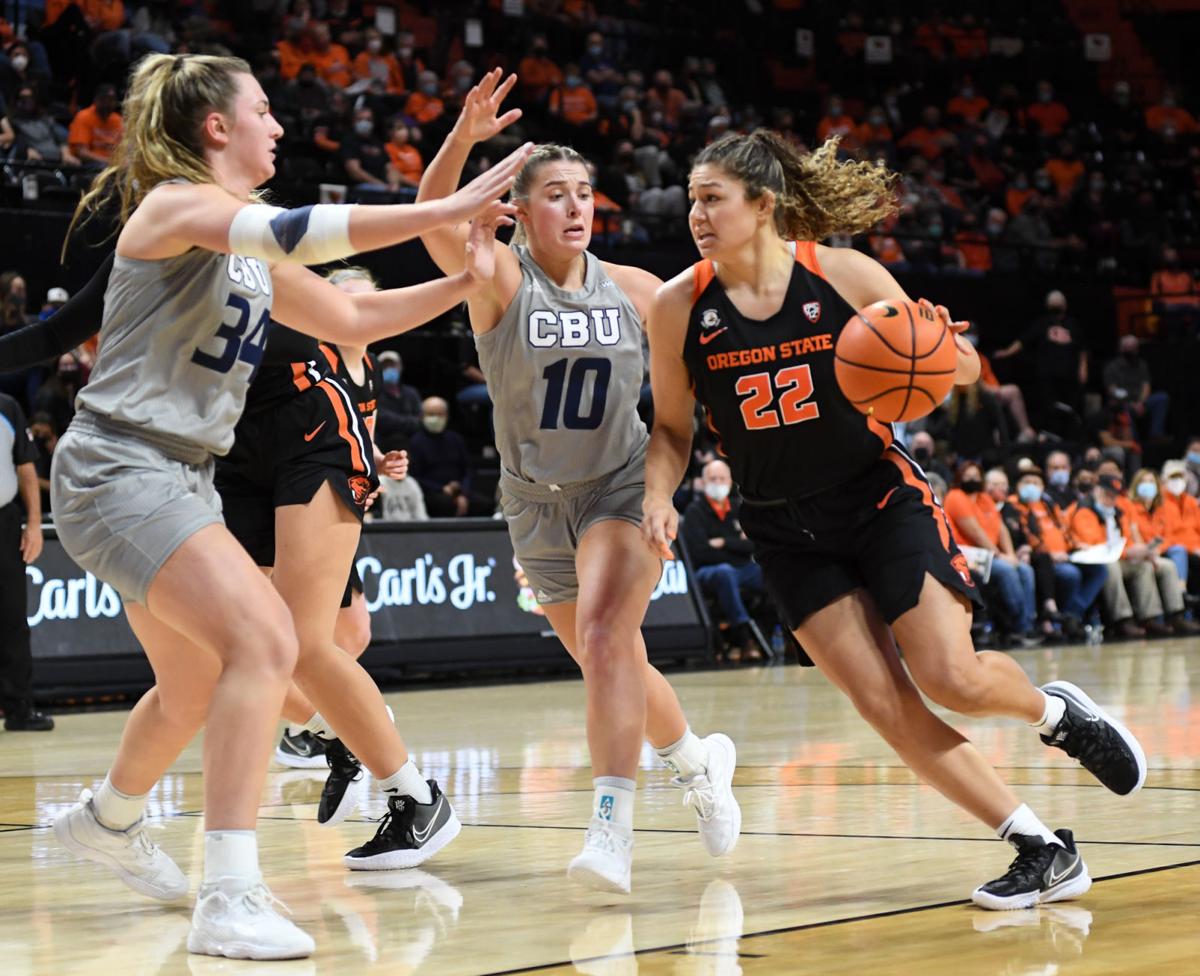 Oregon State point guard Talia von Oelhoffen has taken on more responsibility this season with the departure of Aleah Goodman. 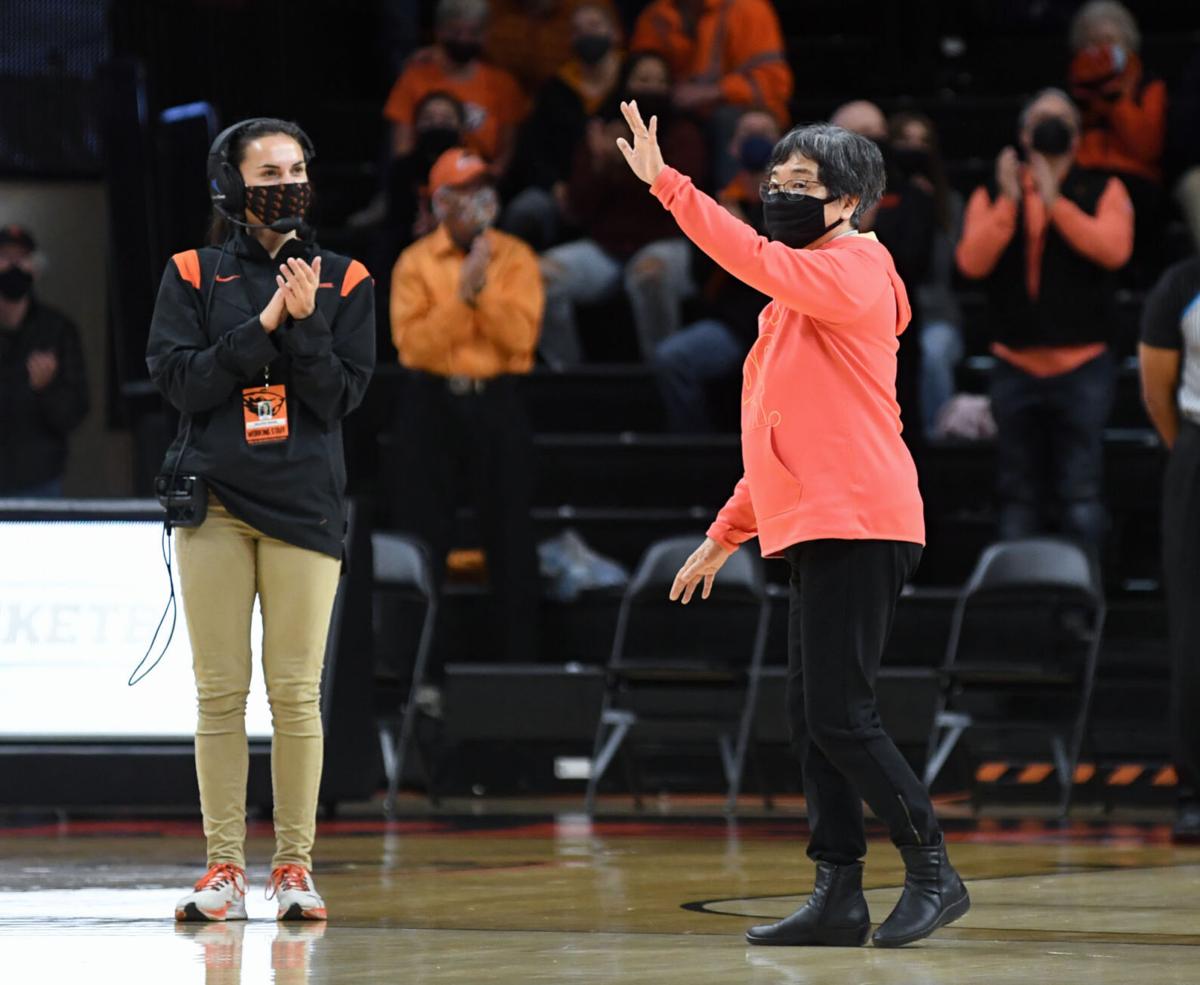 Oregon State fans cheered former head coach Aki Hill when she was introduced after the first quarter of Saturday's home victory. Hill has been inducted into the Oregon State University Athletics Hall of Fame.

The Oregon State women’s basketball team had multiple new players to meld into its rotation this season.

The four newcomers are all guards. Most of the team’s returning players are forwards and posts. This led to a question for coach Scott Rueck about his expectations for the team’s pace of play this season. Because of the team’s wealth of experienced frontcourt players, would it be better to slow down the pace in order to work the ball inside?

Rueck believes that question is ultimately misguided. Fast breaks are fun and high-scoring games can be enjoyable for fans, but in matchups of two quality squads the pace almost inevitably slows down, he said.

As examples, Rueck noted the final score of last season’s national championship game in which Stanford beat Arizona 54-53. He also pointed to two of the marquee matchups early this season in which Arizona knocked off Louisville 61-59 and Texas defeated Stanford 61-56.

“Everybody says ‘We’re going to run. We’re going to be uptempo,’” Rueck said. “When you play against the very best, you’re not going to let each other run. You’re going to get a turnover and a steal, you might get out and go and certainly you want those two to three fastbreak buckets. And that’s the difference, that’s what gets you to 60, actually, in those games.”

Rueck recalled his early years at Oregon State when Oregon was coached by Paul Westhead, a former NBA coach. Westhead coached the Los Angeles Lakers early in Magic Johnson’s career and together they created the “Showtime” offense. At Oregon from 2009-2014, Westhead continued to push his squads to play at a very fast pace.

Westhead’s Ducks won the first meeting of the two teams, but Rueck’s Beavers won the next seven in a row.

“The reality is, in a way it’s a bit of a myth. When you’re getting stops you can run. Great teams don’t turn it over. You have to be great at both,” Rueck said. “Would we like to score before they get back? Yeah, we’re looking for that on every possession. … But we know that you have to be a great half-court team if you’re going to win big. That’s the bottom line. Whoever executes in the quarter-court is going to win the biggest games.”

Talia von Oelhoffen joined Oregon State midway through last season and quickly became an integral part of the team. But Rueck believes this is still her true freshman season and it is to be expected that she will go through the typical freshman growing pains.

Rueck notes that von Oelhoffen didn’t get a training camp last year and she didn’t get to play in the nonconference games.

“She was in survival mode,” Rueck said.

Von Oelhoffen said her experience so far this year has been completely different.

“I have a very different role this year, with Aleah (Goodman) being gone and having to play the point guard position,” von Oelhoffen said. “Last year, I was only at the 1 when she was out, and she was playing over 35 minutes a game. I have a lot more on my shoulders, a lot more is asked of me. I have kind of a leadership role, so it’s a lot different from what I was doing last year.”

Rueck agreed that Goodman’s presence made von Oelhoffen’s quick transition to the college game much easier.

“She was Aleah’s sidekick. Now, she’s running the show. Completely different. In the role that she’s in, this is brand new to her. She did not have anywhere near the responsibility a year ago that she has now,” Rueck said. “She’s got a foundation of confidence based on a year ago. I think that’s helpful, but as far as executing and running the team, this is all brand new.”

Former Oregon State coach Aki Hill received a standing ovation at Gill Coliseum when she was introduced after the first quarter of the Beavers’ win over Cal State Bakersfield on Saturday. Hill was a 2020 inductee to the Oregon State University Athletics Hall of Fame, but because of the pandemic, her recognition was postponed.

Rueck said Hill continues to be intimately connected to the program and he gave her credit for helping him make the transition from George Fox to Oregon State in 2010.

Rueck recalled that shortly after he was hired he was told that Hill wanted to meet him. He felt overwhelmed by his new post and that meeting was invaluable.

“What she did in that 90-minute conversation was give me confidence and make me feel like I could do this job,” Rueck said. “She just looked at me and she says, after the conversation, ‘You’re an Oregon State coach.’ I needed that.”

Three games into their freshmen seasons, guards Greta Kampschroeder and AJ Marotte have established themselves as contributors for the Oregon …

Oregon State lost a low-scoring contest to Michigan on Friday in a matchup of top-20 teams at the Daytona Beach Invitational.

Oregon State trailed Notre Dame by 20 points entering the fourth quarter of their matchup at the Daytona Beach Invitational on Saturday.

Oregon State point guard Talia von Oelhoffen has taken on more responsibility this season with the departure of Aleah Goodman.

Oregon State fans cheered former head coach Aki Hill when she was introduced after the first quarter of Saturday's home victory. Hill has been inducted into the Oregon State University Athletics Hall of Fame.