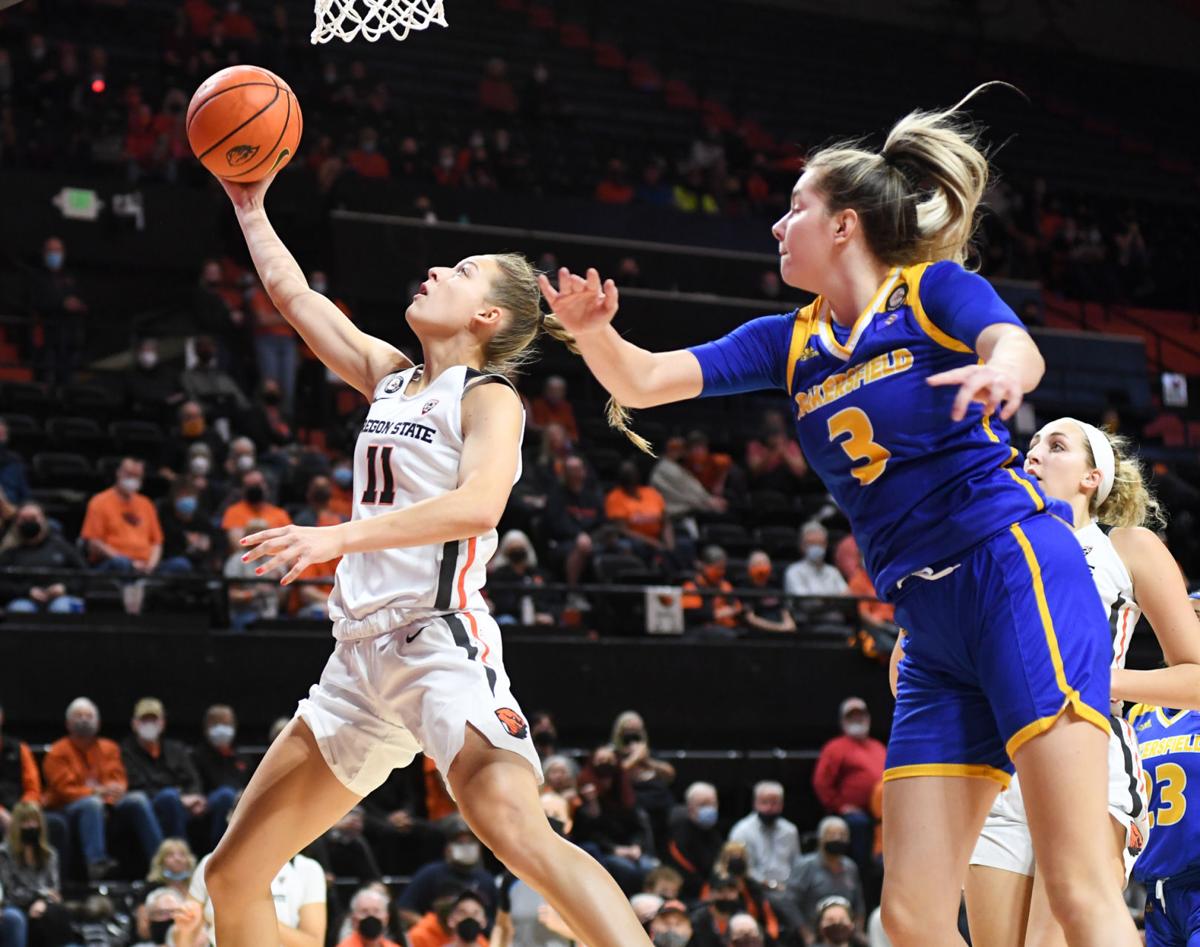 Oregon State freshman AJ Marotte (11) led the Beavers in scoring with 19 points as they defeated CSU Bakersfield 82-51 on Saturday at Gill Coliseum. 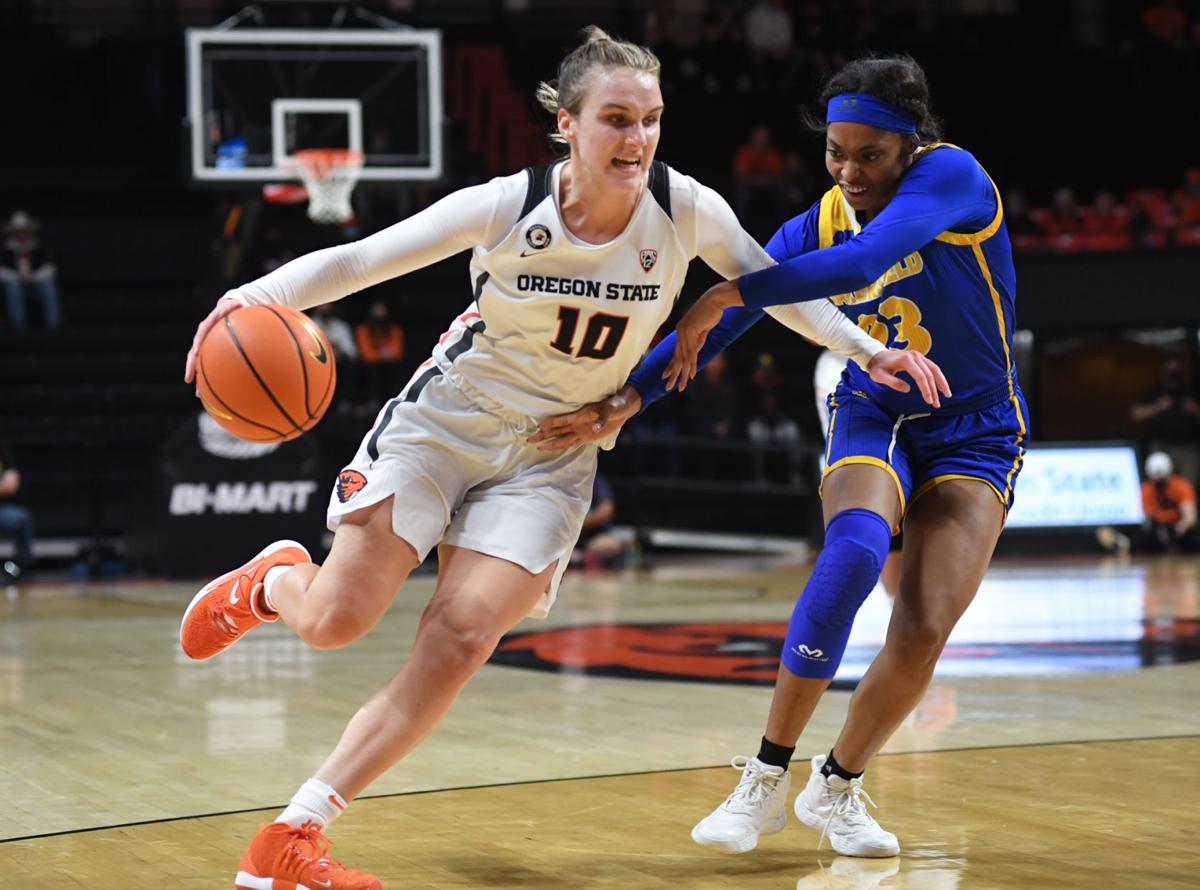 Oregon State freshmans Greta Kampschroeder (10) looks for room to maneuver. She scored 13 in the Beavers' victory against CSU Bakersfield on Saturday. 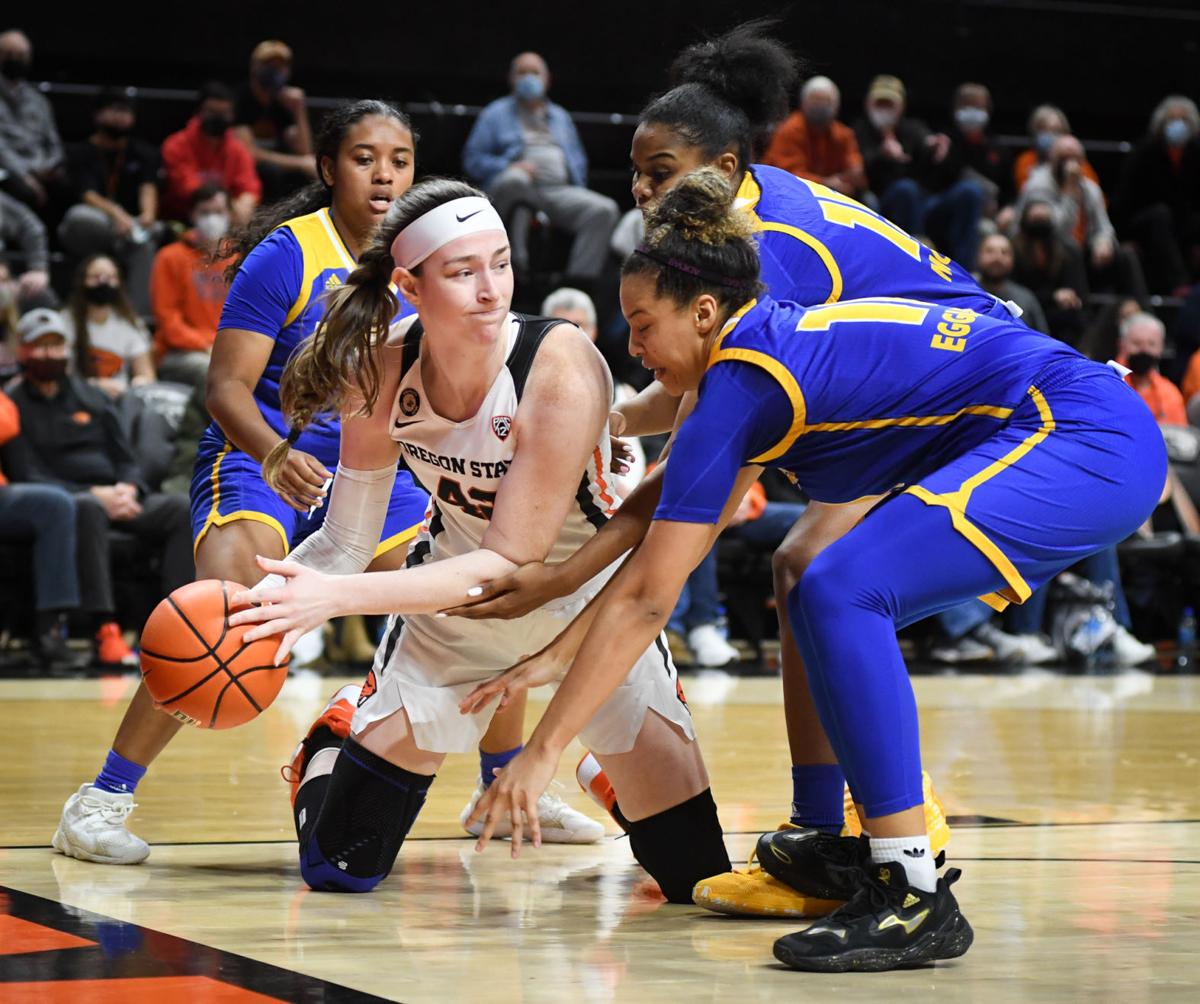 Oregon State's Kennedy Brown (42) finds herself surrounded by a trio of CSU Bakersfield defenders in the first half. 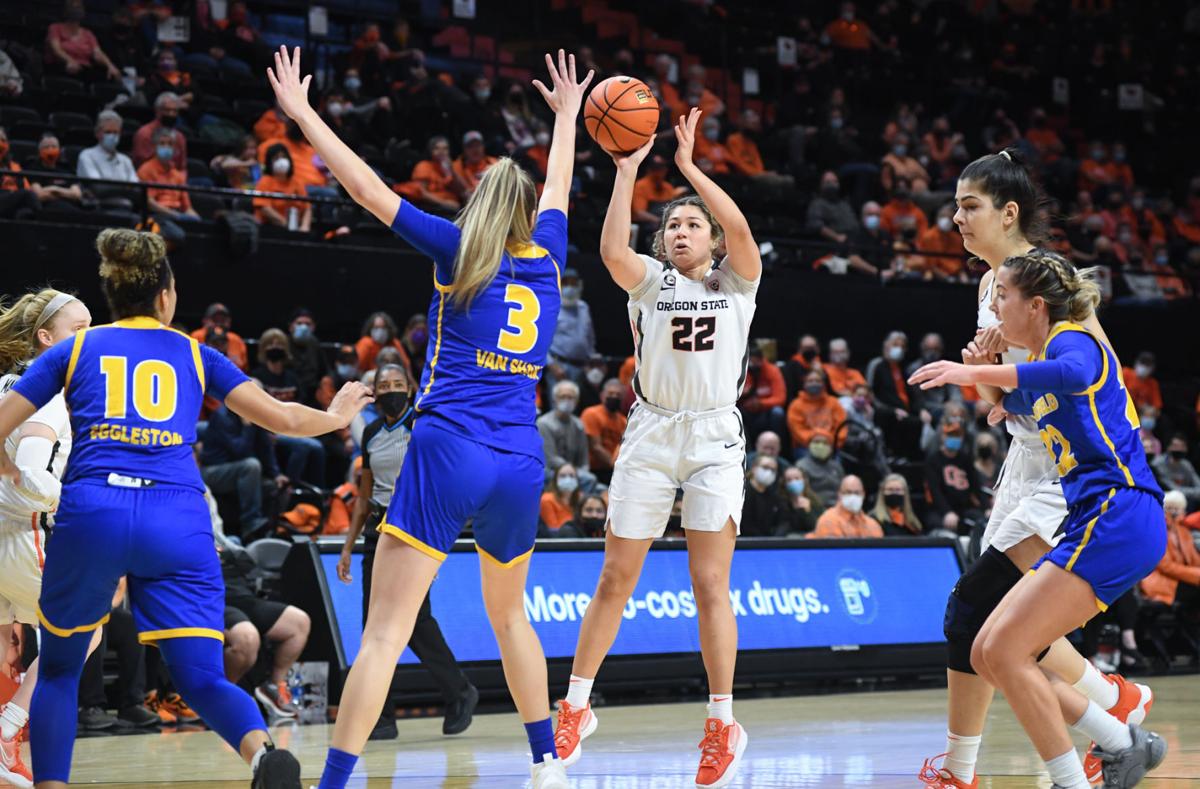 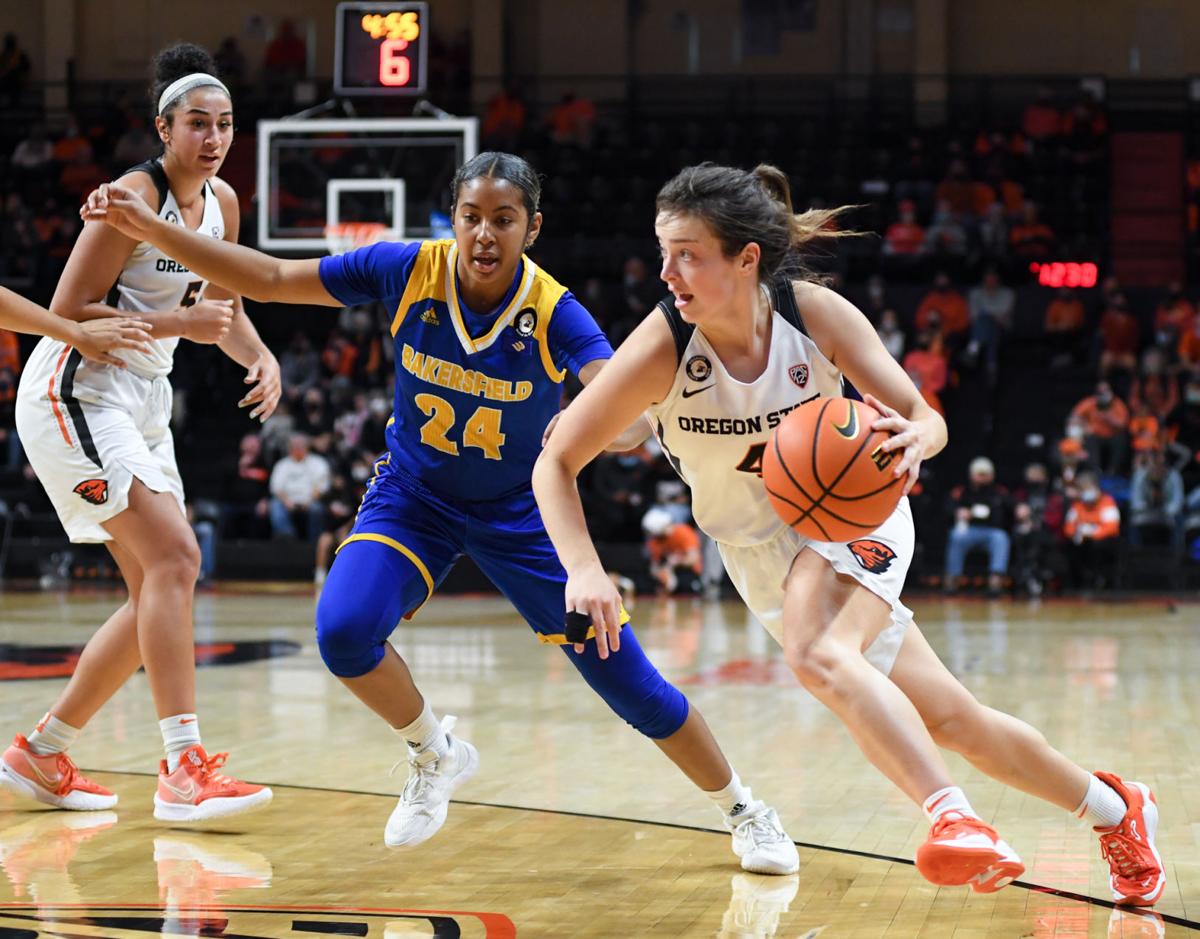 Oregon State's Noelle Mannen (4) drives to the basket in the first half of the Beavers' 82-51 victory. OSU improved to 3-0 with the win. 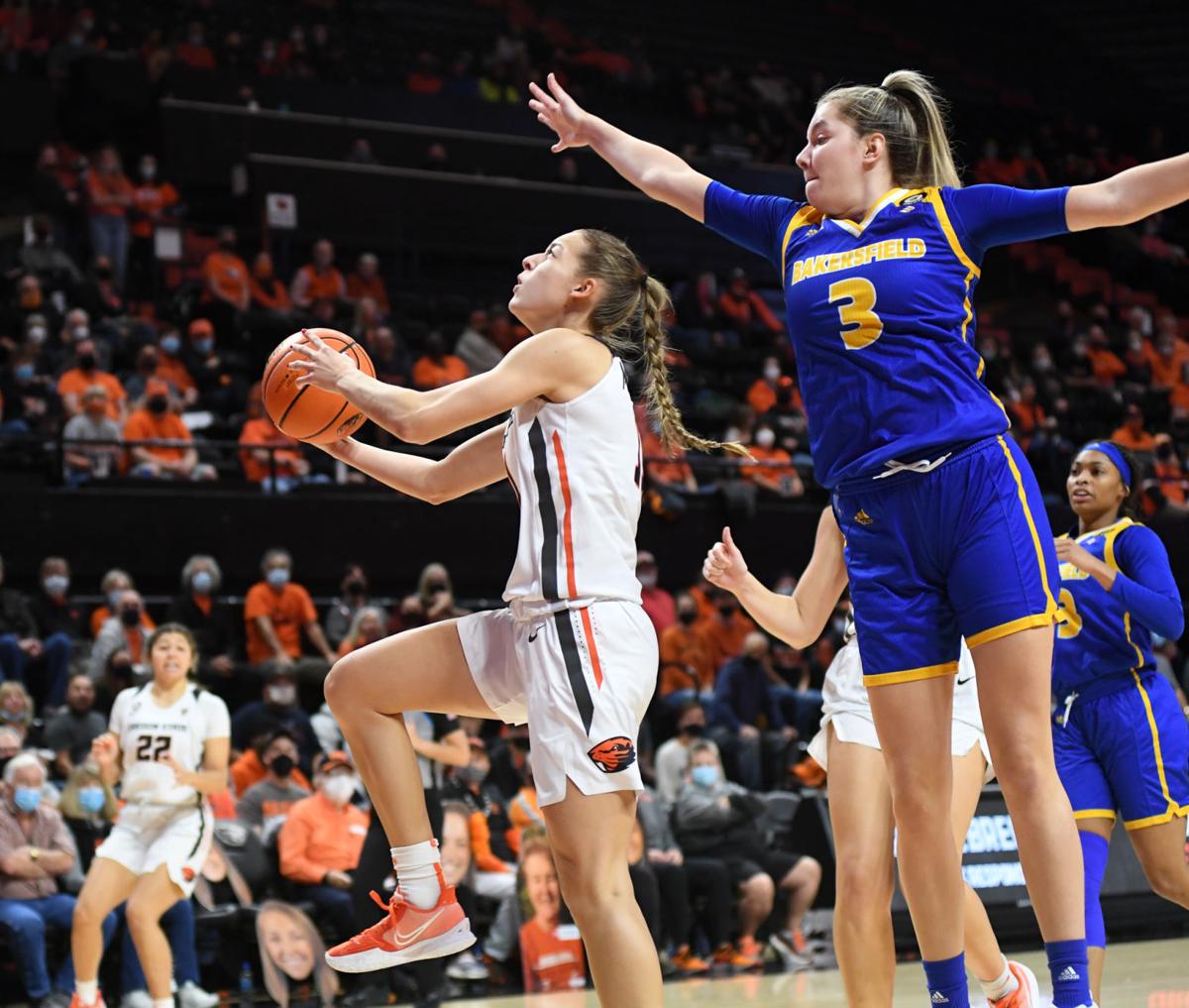 Three games into their freshmen seasons, guards Greta Kampschroeder and AJ Marotte have established themselves as contributors for the Oregon State women’s basketball team.

Marotte scored a game-high 19 points and Kampschroeder added 13 in the Beavers’ 82-51 victory over Cal State Bakersfield on Saturday afternoon at Gill Coliseum.

The victory capped a three-game homestand for No. 15 Oregon State (3-0) who will play a pair of high-profile games this week against No. 13 Michigan on Friday and perennial power Notre Dame on Saturday.

Oregon State coach Scott Rueck was pleased to see the freshmen adapt so quickly to a higher level of competition.

“There’s no way to predict how ready these two … were going to be. You see it in practice. I think one of the hallmarks of our program has been to create comfortable first-year players, whether it’s a transfer or a first-year freshman. To see them compete the way they did this week over these three games is really no surprise to me, but I didn’t know that before. It was awesome to see them settle in and do their thing,” Rueck said.

Marotte demonstrated her accuracy as a long-range shooter, making 4 of 6 attempts from beyond the arc. One of the highlights of the game was her back-to-back 3-pointers from the corner which forced the Roadrunners to call timeout and sparked a celebration on the way back to the Oregon State bench.

For the season, Marotte has made 7 of 9 3-point attempts.

“We get the reps in practice. It’s over and over and over. And with the competition in practice, playing against these older girls, they’re making me better every day,” Marotte said.

Kampschroeder also shot well on Saturday, going 3-for-5 from beyond the arc. She moved into the starting lineup against the Roadrunners and continued to demonstrate her all-around game with three rebounds, three assists and a steal.

Kampschroeder said these opening games have been a great learning experience.

“There’s just little room for error when it comes to making mistakes,” Kampschroeder said. “Scott’s teaching us to see things we didn’t see before and it’s crazy because it’s just a whole other level to the game. You don’t realize how important those things are until you get in the game.”

The game was competitive through the first quarter but the Beavers pulled away with a 19-7 advantage in the second. Oregon State dominated inside, outscoring the Roadrunners 38-24 in the paint and outrebounding Cal State Bakersfield 38-16.

In their first two games, the Beavers used big runs in the third quarter to pull away from their opponents. Rueck was happy with the improved consistency he saw against the Roadrunners.

“Today, I just liked our focus from the beginning. I thought we really executed well, we rebounded well. We didn’t shoot the ball great to start the game, but when you’re defending like that, ultimately, you’ll gain momentum,” Rueck said.

Oregon State was 29 for 57 from the field (51%) and 10 of 24 on 3-pointers (42%). The Beavers once again took advantage of their size advantage to get good looks inside, but they also ran their offense efficiently, with 21 assists on 29 made field goals. Téa Adams led the team with five assists and Talia von Oelhoffen had four. For the game, 10 different players had at least one assist.

“This is a team that has weapons all over the place and when that ball is moving, it’s really beautiful to watch. I loved those stretches in this game where the ball moved freely and found the open shooter,” Rueck said.

Notes: The Beavers changed their starting lineup on Saturday with Kampschroeder and Kennedy Brown joining Corosdale, von Oelhoffen, and Taylor Jones. … Cal State Bakersfield assistant Xavier Johnson led the team in the absence of head coach Greg McCall. … Former OSU head coach Aki Hill was honored after the first quarter in recognition of her induction into the OSU Hall of Fame. The crowd gave an extended standing ovation to Hill, who won 274 games over 17 seasons and led the Beavers to eight postseason tournaments. … Attendance: 4,045.

Please see this story at the website for a gallery of photos.

The Oregon State women’s basketball team dominated Loyola Marymount Friday night in an 82-52 victory in their season-opener at Gill Coliseum.

The Oregon State women’s basketball team had multiple new players to meld into its rotation this season.

Oregon State freshman AJ Marotte (11) led the Beavers in scoring with 19 points as they defeated CSU Bakersfield 82-51 on Saturday at Gill Coliseum.

Oregon State freshmans Greta Kampschroeder (10) looks for room to maneuver. She scored 13 in the Beavers' victory against CSU Bakersfield on Saturday.

Oregon State's Kennedy Brown (42) finds herself surrounded by a trio of CSU Bakersfield defenders in the first half.

Oregon State's Noelle Mannen (4) drives to the basket in the first half of the Beavers' 82-51 victory. OSU improved to 3-0 with the win.