Oregon women's basketball: Ducks look to reload with plethora of talent
Share this
{{featured_button_text}}
1 of 2 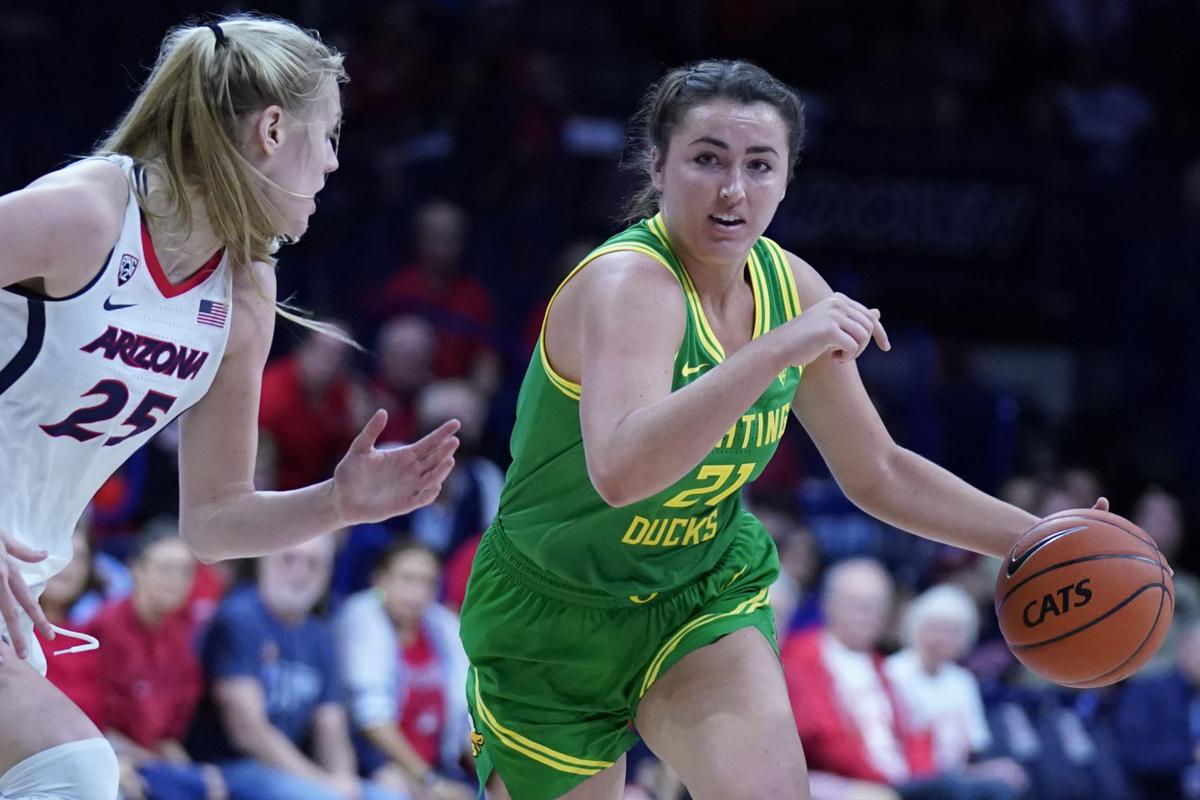 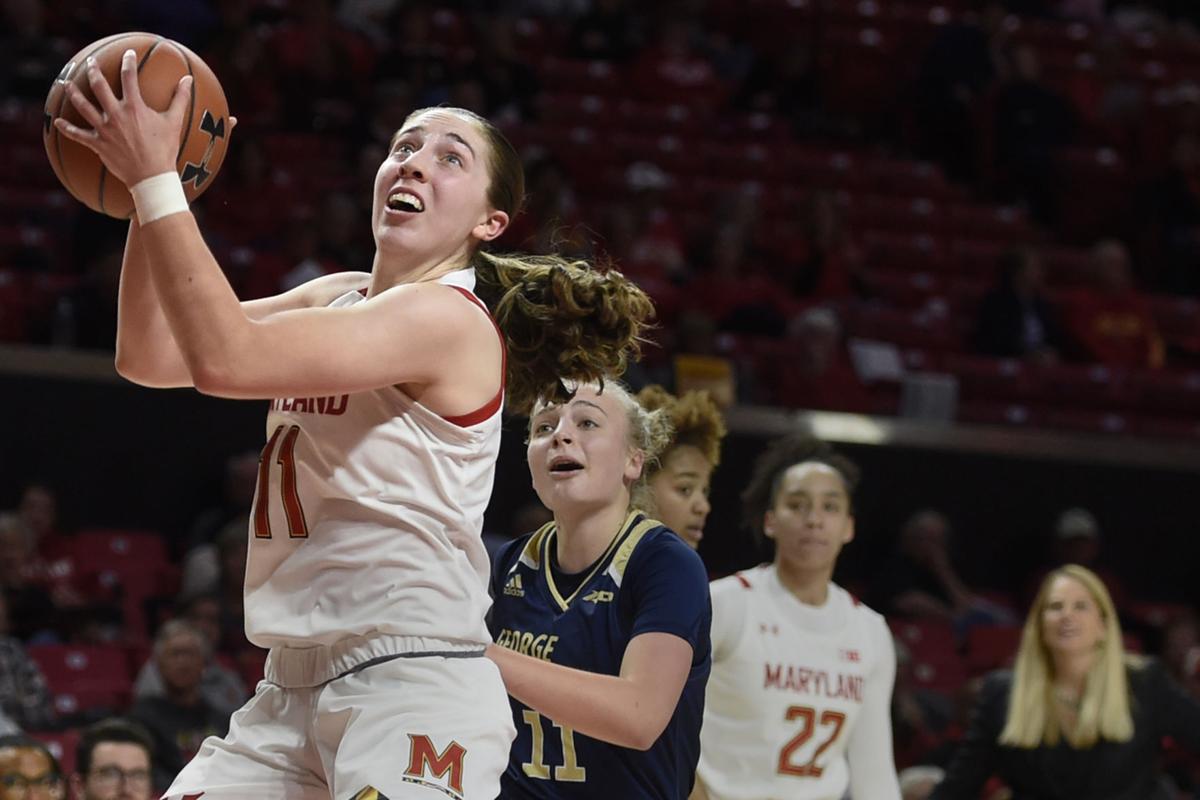 Taylor Mikesell averaged 12.3 points per game in two seasons at Maryland and will look to continue that production at Oregon.

There’s no doubt the Oregon women’s basketball program is going to have an entirely different look with the departures of three WNBA first-round draft picks no longer on the roster.

Sure, replacing the star power and production of Sabrina Ionescu (No. 1), Satou Sabally (No. 2) and Ruthy Hebard (No. 8) will be difficult, to say the least, but don’t count the Ducks out just yet.

Oregon has won the last three Pac-12 regular-season titles, and while Stanford is the pick to finish first this season, the Ducks are not that far behind. Oregon was picked to finish third by the media and tied with Arizona for second in the coaches poll.

“Yeah, I mean it's definitely going be an entirely new team with a new identity, and we knew that coming in,” said senior Erin Boley, the lone returning starter off a team that went 31-2 overall and 17-1 in the Pac-12.

“It's a big change from last year to this year for all of the returners but we have an amazing incoming freshman class and amazing people coming in as transfers. … I think we have a great combination right now of players, and even though it's a big shift from last year we're going to come back really strong with a great team this year.”

While the Ducks may be short on experience, they have a plethora of talent from returners, transfers and the top-rated recruiting class that is composed of five five-star and McDonald's All-Americans.

“Day to day we have a different one step up, it's a really tremendous class,” coach Kelly Graves said. “The one that's been the most consistent for us and really has a chance to be a star is Te-Hina Paopao, I think she's really solidified herself as our top guard and I think, hopefully, we have a another Sabrina-Ruthy combination with Te-Hina and Sedona.”

Sedona is Sedona Prince, a 6-7 transfer from Texas who missed her entire freshman season with an injury in 2018-19 before transferring to Oregon and sat out after not being cleared to play by the NCAA.

“She's capable around the rim and she's going to be 6-7 the whole game,” he said. “Finishes with either hand, she's really strong, she's got a nice touch to 17, 18 feet. I love her at the high post and we're playing a lot more through her than we did through Ruthy as a center. In the past we've run through either Satou or Sabrina and now we're going to do a lot through Sedona.

Boley shared similar thoughts on the edition of Prince.

“Sedona’s going to be great for us, I think, all the way around,” she said. “As far as our post play goes, I think we're going to be really strong in that area. I'm really excited to be able to play with Sedona this year.”

Boley (9.2 points per game last season) and Prince were both named to the media’s preseason 15-player all-conference team on Tuesday while sophomore Jaz Shelley and juniors Taylor Chavez and Taylor Mikesell received honorable mention by appearing on at least four ballots.

Chavez was the conference's sixth player of the year last season and averaged 6.5 points, while Shelley added 6.3 points per game. Both played under 20 minutes per game.

Mikesell, a transfer from Maryland, averaged 12.3 points per game in two seasons with the Terrapins and was the Big Ten freshman of the year in 2019.

Nyara Sabally has missed the past two seasons with injuries and never had the opportunity to play with her older sister, who left after her junior year.

Also on the roster are senior Lydia Giomi, who played in 31 games and averaged 3.3 points in 11 minutes last season, and junior Arielle Wilson, a 6-6 junior college transfer in her first season.

With so many new faces and a unique offseason dictated by COVID-19 precautions, the Ducks haven’t had as much time to prepare for the season as usual. They aren’t concerned about that.

OSU football: Gebbia out for Utah game, might be done for season

Oregon State quarterback Tristan Gebbia will not play Saturday at Utah, and could potentially miss the rest of the season due to a hamstring injury.

Even in his wildest dreams, Chance Nolan could not have come up with that ending.

All his life, Jermar Jefferson has played with a chip on his shoulder.

Chance Nolan’s first and only snap as an Oregon State football player resulted in one of the more impactful moments in recent program history.

Hamilcar Rashed Jr. doesn’t want to make excuses, and nobody inside the Valley Football Center is going to let him.

The rivalry football game between Oregon State and Oregon may not have fans in the stands, or even an official name at this point. But that do…

Champions of the decade: A decade of dominance for Santiam Christian volleyball

It was a dominant decade for Santiam Christian volleyball, with 3A state championships at each end of the 10-year span and four more in between.

49ers blindsided by county rules that make them homeless

Taylor Mikesell averaged 12.3 points per game in two seasons at Maryland and will look to continue that production at Oregon.