Oregon women's basketball: Ducks battle to end but fall short against No. 1 Stanford
Share this
{{featured_button_text}}
1 of 3 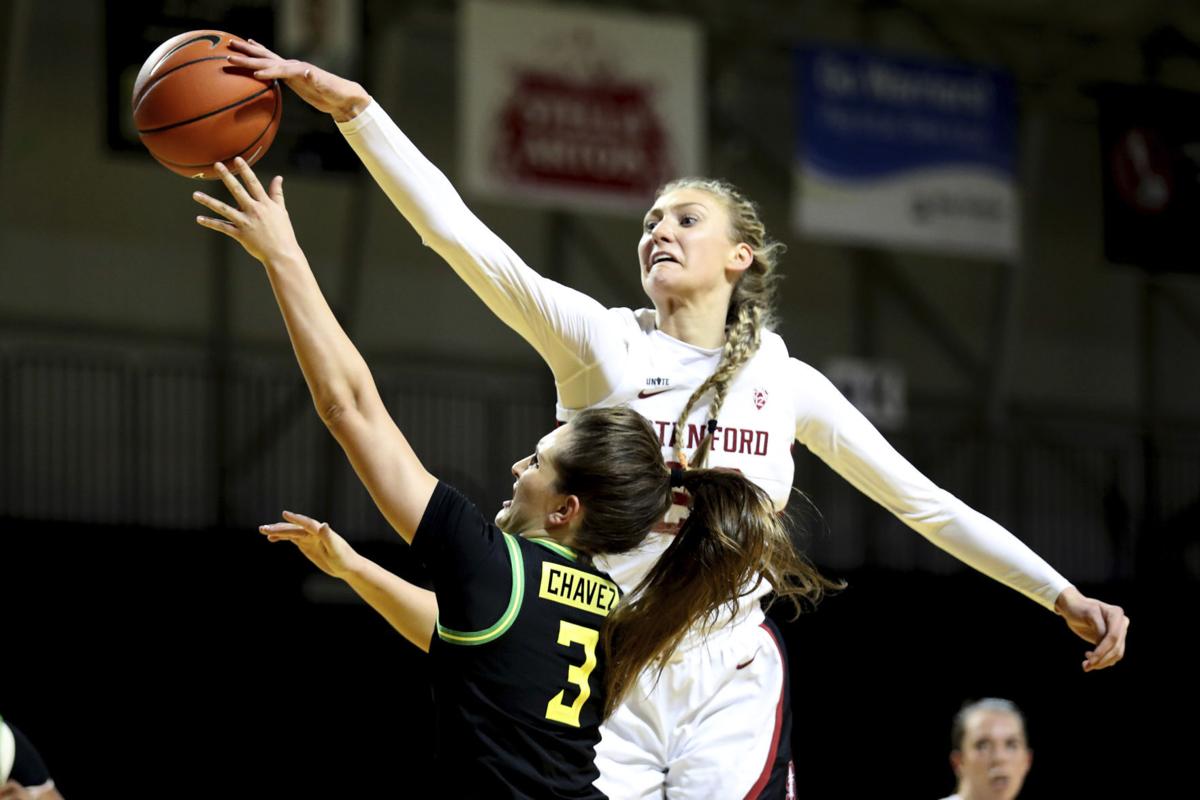 Stanford's Cameron Brink blocks a shot by Oregon's Taylor Chavez during the first half on Friday. The No. 1 Cardinal opened a 17-point lead in the fourth before holding on for a 70-63 win over the No. 11 Ducks. 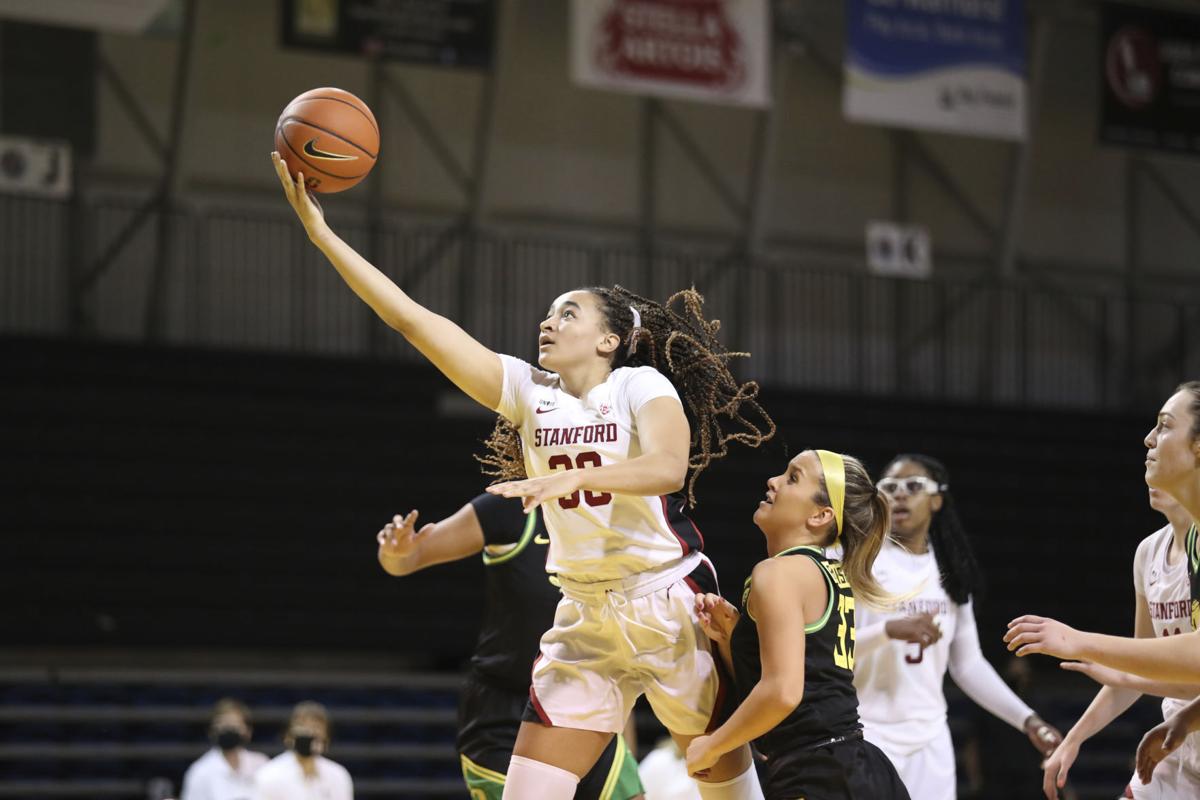 Stanford's Haley Jones shoots against Oregon's Sydney Parrish during the second half. Jones had 18 to lead all scorers while Parrish had 14 off the bench for the Ducks. 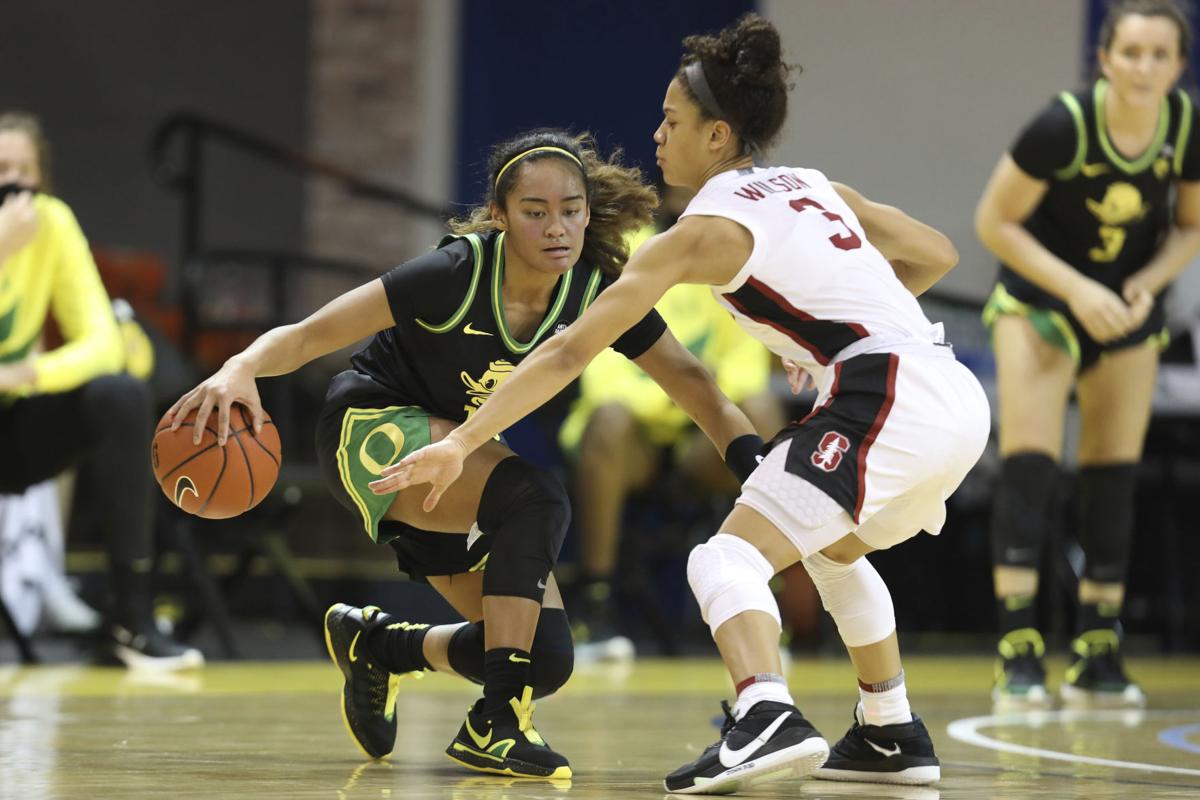 Stanford's Anna Wilson, front right, defends against Oregon's Te-Hina Paopao during the second. Wilson had 11 points for the Cardinal while PaoPao had 12 for  the Ducks.

For the second straight game, the Oregon women’s basketball team found itself down by double figures to a top-11 opponent in the fourth quarter.

And for the second time in as many games, the Ducks made a valiant comeback attempt.

Both times, however, Oregon came up short.

This time it was No. 1 Stanford that was able to hold on and fend off the upset bid by the No. 11 Ducks as the Cardinal remained undefeated with a 70-63 Pac-12 win on Friday afternoon at the Kaiser Permanente Arena in Santa Cruz, California.

“I'm disappointed, quite frankly,” Oregon coach Kelly Graves said. “I mean, I'm proud of the players for how we continued to battle but at the same time I'm disappointed we lost the game. You know, we've won this conference three times in a row, we expect to win. But I am proud. This is a good learning experience. I don't think anybody had us coming in here and beating these guys.”

Oregon went toe-to-toe with the Cardinal (10-0, 7-0) and became the first team to hold a halftime lead on Stanford this season.

But after Te-Hina PaoPao drained a 3-pointer to put the Ducks up 43-42 with 5:28 to play in the third, it was all Cardinal for the next seven-plus minutes.

Ana Wilson’s 3-pointer ignited an 18-4 run to close the third quarter and put the Cardinal up 60-47 heading to the final 10 minutes.

The run came shortly after Erin Boley, the Ducks' only senior starter, picked up her fourth foul with 7:29 left in the third.

“That hurt us,” Graves said. “You know we're trying to beat the best team in the land, and they're legitimately the No. 1 team, with very little senior leadership on the court, upperclass leadership.”

Still, down 17 after Stanford scored the first four point of the fourth, the Ducks never went away.

An 8-0 run, all by freshman Sydney Parrish, got the Ducks within 64-55 with 5:38 to play. However, they went scoreless over the next three-plus minutes to allow the Cardinal to keep control.

The Ducks were able get within 66-61 with just under a minute to play but despite several opportunities, that was as close as they would get as the Cardinal closed it out from the free-throw line.

“If we would have played this hard against UCLA last week, we win by double figures," Graves said. "And so at least as far as I'm concerned, we learned a lesson. And now we've just got to figure out how we take it next level and beat these teams. Today was good opportunity.”

Parrish led the Ducks with 14 points while PaoPao had 12 and Boley and Nyara Sabally each chipped in 10.

Haley Jones led all scorers with 18 for the Cardinal, who also got 14 points from Kianna Williams and 11 from Wilson.

Oregon took a 33-32 lead into the half after leading by as many as seven in the second period. The Cardinal used a 9-2 run to tie the game at 30-all before taking their first lead since 5-4 on a Jones bucket with 2:53 to play in the half.

But the only other points in the half came on a 3-pointer by Parrish, who hit two in the period, to give the Ducks the lead.

Eight Stanford players scored in the first half with Jones leading the way with eight.

Oregon played 11 players in the first half with Parish, Boley and Sabally each scoring six.

The Ducks took a 20-14 lead after the first quarter thanks to a deep three from Maddie Scherr at the buzzer.

The Ducks again played without Sedona Prince bit did get Taylor Chavez back. She scored six points in 20 minutes.

The Cardinal were without three players, including starting guard Lexie Hull, who was averaging 11.1 points per game.

“I think we showed today that we're capable of playing with the best,” Graves said. “A good portion of this game we were the aggressors and I think we're going to be a tough out. We're going to continue to get better. ... We learned to compete harder and play harder and every possession matters and I thought we showed that tonight. So to me, that means we're growing.

“We’re starting to settle on a lineup and a rotation and I think they're starting to get more and more comfortable. I like where we're at, but you know what we lost the game so I'm disappointed. We’ve got to now get better for Sunday and try to beat Cal because then we've got to go to the Arizona's next week. it doesn't get easier in this league. So, we'll keep getting there. I’m confident.”

Dane Sipos fell in love with football at Autzen Stadium.

OSU men's basketball: Changes may be coming after Arizona loss

Oregon State men’s basketball didn’t get its regular stretch of summer workouts and the fall lead-up to the season was cut short due to the pandemic.

OSU men's basketball: Defense gets the job done in win against USC

Playing defense the way Oregon State coach Wayne Tinkle wants out of his team has been a work in progress this season.

Inside Carson Wentz's turbulent season and the forces behind his regression

Howie Roseman had a life-sized poster of Carson Wentz in his office at the NovaCare Complex.

Oregon State's crowded running back room became a little less so on Thursday.

SAN LUIS OBISPO, Calif. — The Oregon State wrestling team earned its third win of the season with a 23-17 defeat of Cal Poly Thursday.

Stanford's Cameron Brink blocks a shot by Oregon's Taylor Chavez during the first half on Friday. The No. 1 Cardinal opened a 17-point lead in the fourth before holding on for a 70-63 win over the No. 11 Ducks.

Stanford's Haley Jones shoots against Oregon's Sydney Parrish during the second half. Jones had 18 to lead all scorers while Parrish had 14 off the bench for the Ducks.

Stanford's Anna Wilson, front right, defends against Oregon's Te-Hina Paopao during the second. Wilson had 11 points for the Cardinal while PaoPao had 12 for  the Ducks.