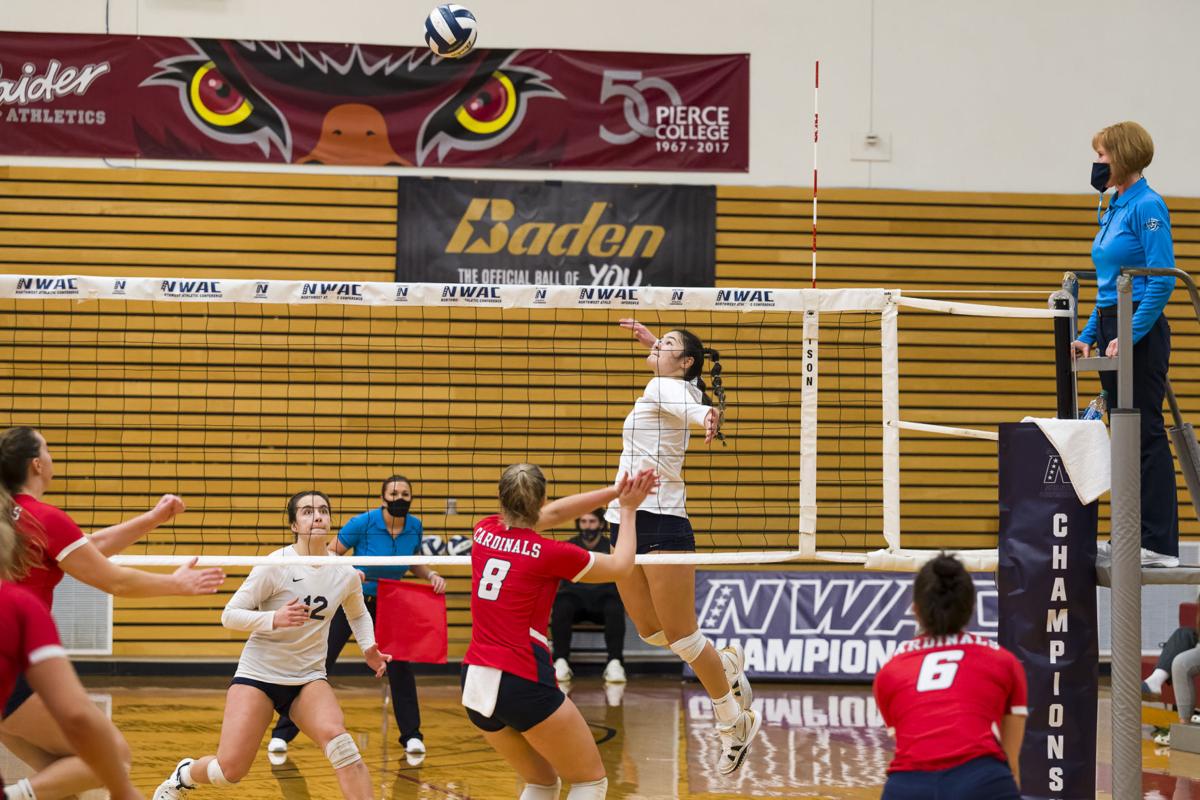 Linn-Benton's Taya Manibusan was named the most valuable player of the NWAC tournament. 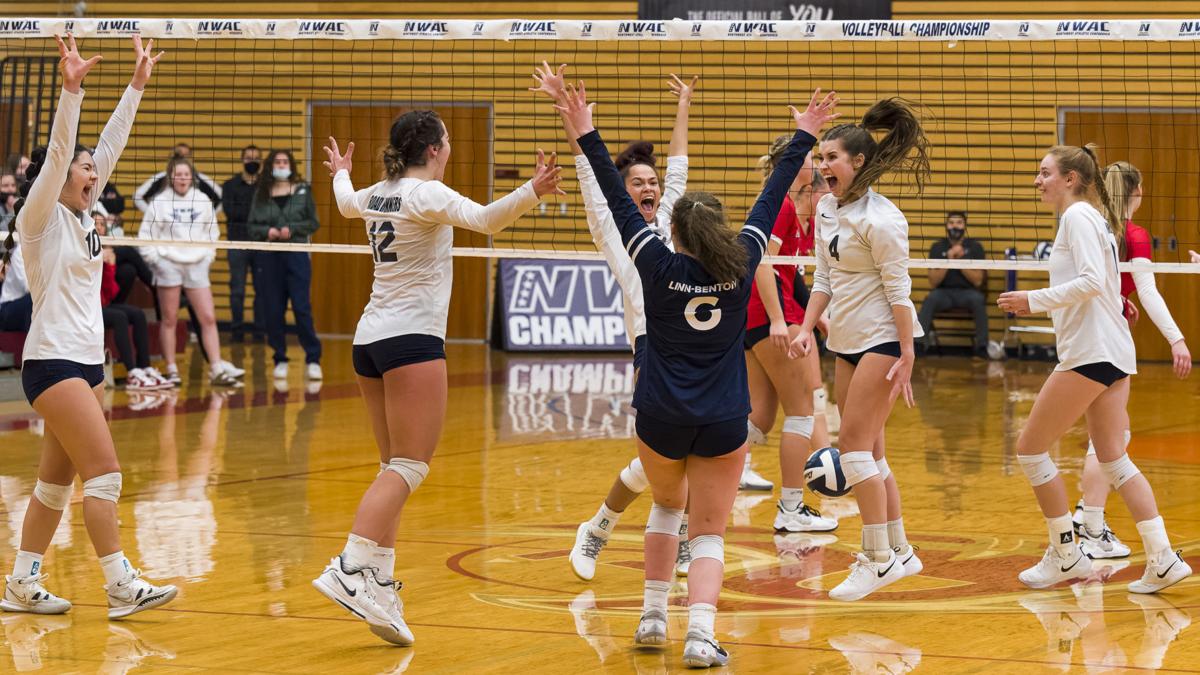 Linn-Benton players celebrate after their win over Skagit Valley in the NWAC final on Sunday in Lakewood, Washington. 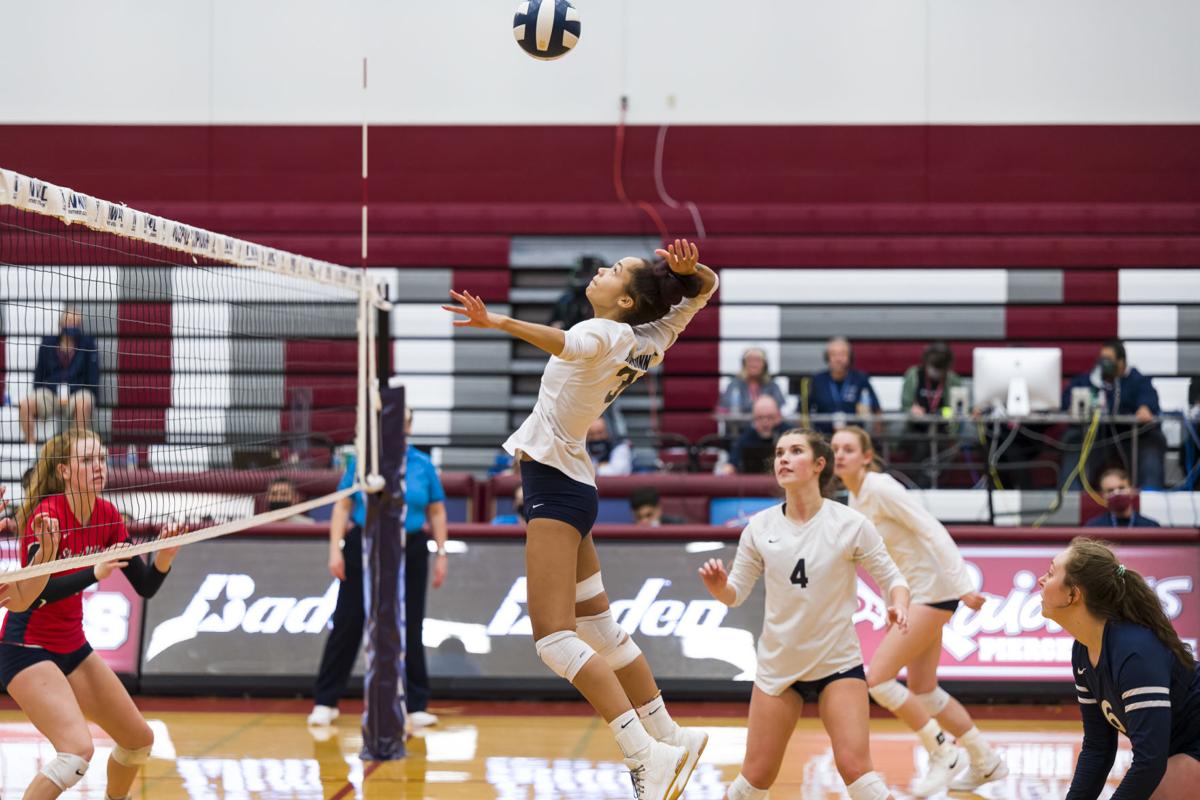 Alicia Vandervoort-Walters goes up for a kill against Skagit Valley.

Jayme Frazier has been the head coach of the Linn-Benton Community College volleyball program for 28 seasons.

On Sunday, she led the Roadrunners to the program’s first Northwest Athletic Conference championship with a four-set victory over Skagit Valley in the final. Linn-Benton won all four of its matches at the double-elimination tournament to claim the championship.

“It feels awesome. That’s not the only reason you’re here, but it’s so nice to have it,” Frazier said. “We’ve come close, final four, final three, even two. And it’s one of those things, you know that you’re doing it for so much more than just that, but to experience that with a team, a group of people, you know that will live on in their memory. It’s pretty cool.”

Linn-Benton freshman Shalyn Gray was previously named the NWAC South region player of the year. The Roadrunners finished the season with a 25-match winning streak and went 32-2 overall.

Chapman said it took time for the team to realize what it had accomplished.

“It didn’t really settle in until later on when we were on the bus and were all talking about it. It was like, ‘Wow. That went by so fast, I can’t believe it really just happened,’” Chapman said.

Frazier said it was rewarding that the Roadrunners had to get past Skagit Valley to win the championship. Linn-Benton defeated Skagit Valley a week ago to win the South regional tournament and then beat them again at the NWAC tournament. After that lost, Skagit Valley won an elimination match against Pierce to make the final.

Frazier said statistically Linn-Benton and Skagit were the best teams in the NWAC throughout the season.

“I knew that if we executed, we were going to beat anybody. But it made me a little bit nervous to play any team that third time in less than two weeks. They’ve got the goods on you and you might know about them, but you still have to execute,” Frazier said.

The Roadrunners had the bull’s-eye on their back throughout the season. The team won its very first tournament and quickly emerged as the team to beat.

Chapman, who is in her third year with the program, said that helped make a team which already had good chemistry even closer.

“We went into it with a strong mindset that we were just going to play for each other,” Chapman said. “This year, there’s something about all the girls. There’s a positive energy on and off the court. We all spend time together outside of volleyball. … So we’re kind of friends outside of volleyball and then on the court, we get along even more, because we have that connection.”

Frazier said she was proud of how the team overcame adversity throughout the season. Kennedy Kantola and Arika Evans suffered season-ending injuries and other players missed time due to injuries, illnesses and COVID protocols.

That resulted in constant switching of lineups and responsibilities. Frazier said freshmen Savannah Hutchins and Shelbey Nichol, among others, did a great job of taking on bigger roles as the season progressed.

“This team, they’ve really bought into the fact that you may have to step up at any time. Don’t stop. Don’t think that your role is set and that you’re not going to get out there. Late in the season I had several players go from not playing much to starting roles,” Frazier said.

The Linn-Benton volleyball team won the Northwest Athletic Association championship on Sunday with a victory over Skagit Valley.

The Linn-Benton Community College volleyball team has advanced to the Northwest Athletic Conference tournament as the top seed from the South Region.

When Alexis Chapman graduated from West Albany High School in 2019, she thought that was basically the end of her volleyball career.

Linn-Benton's Taya Manibusan was named the most valuable player of the NWAC tournament.

Linn-Benton players celebrate after their win over Skagit Valley in the NWAC final on Sunday in Lakewood, Washington.

Alicia Vandervoort-Walters goes up for a kill against Skagit Valley.