Prep softball: Friends since childhood, West Albany’s star-studded senior class hopes to make up for lost time this spring
Share this
{{featured_button_text}}
1 of 3 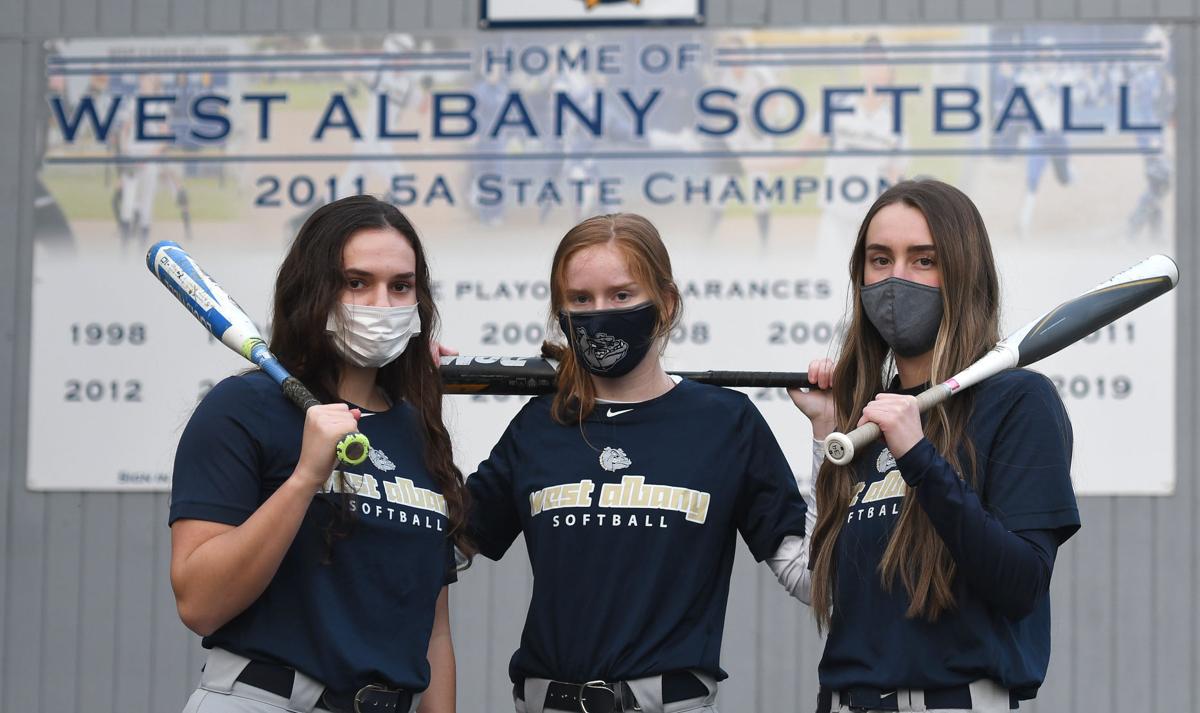 COVID restrictions have all but dashed the hopes that West Albany High seniors Presley Jantzi, left, Ellie Babbitt and McKenzie Kosmicki can compete in a state title game their senior year. These talented Bulldogs are going to be bring their bats to Montana (Jantzi), Portland Sate (Babbitt), and Mt. Hood Community College (Kosmicki). 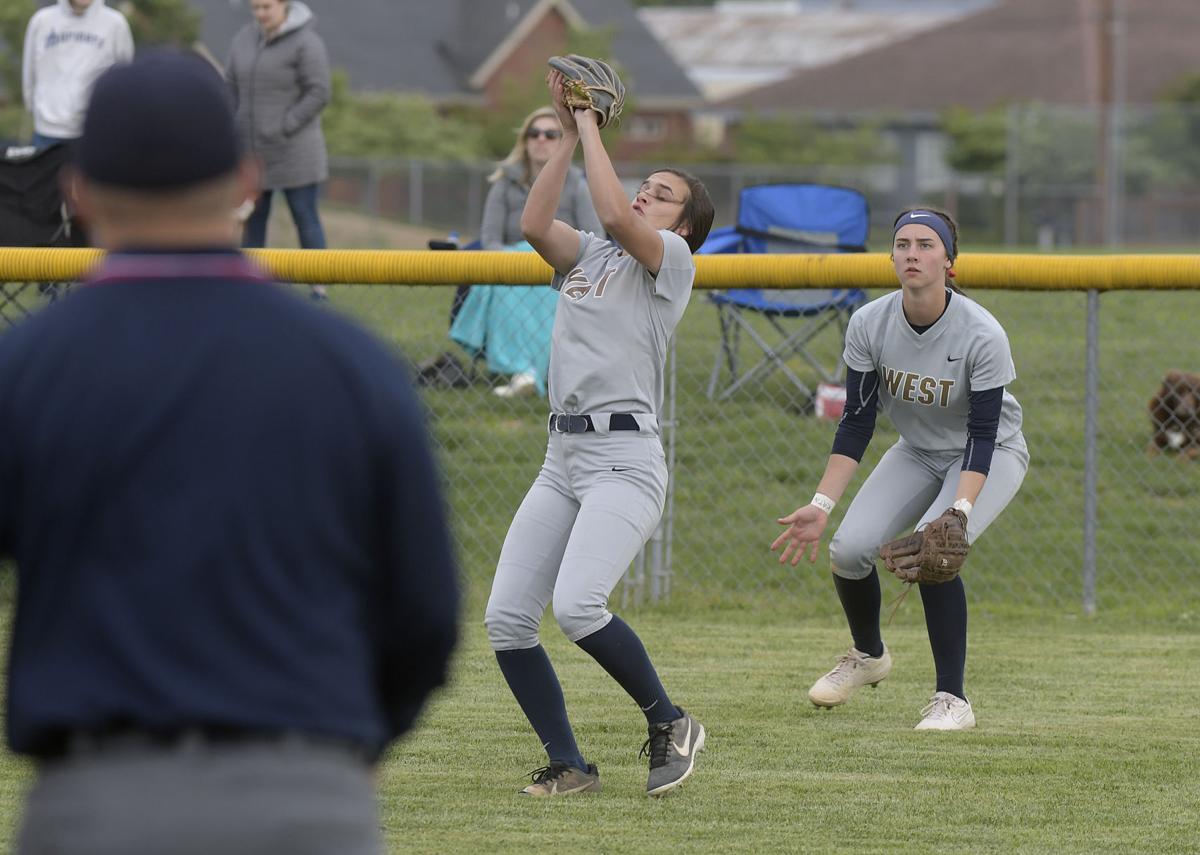 West Albany's Presley Jantzi catches a fly ball while McKenzie Kosmicki backs her up in the 2019 playoffs against Pendleton. 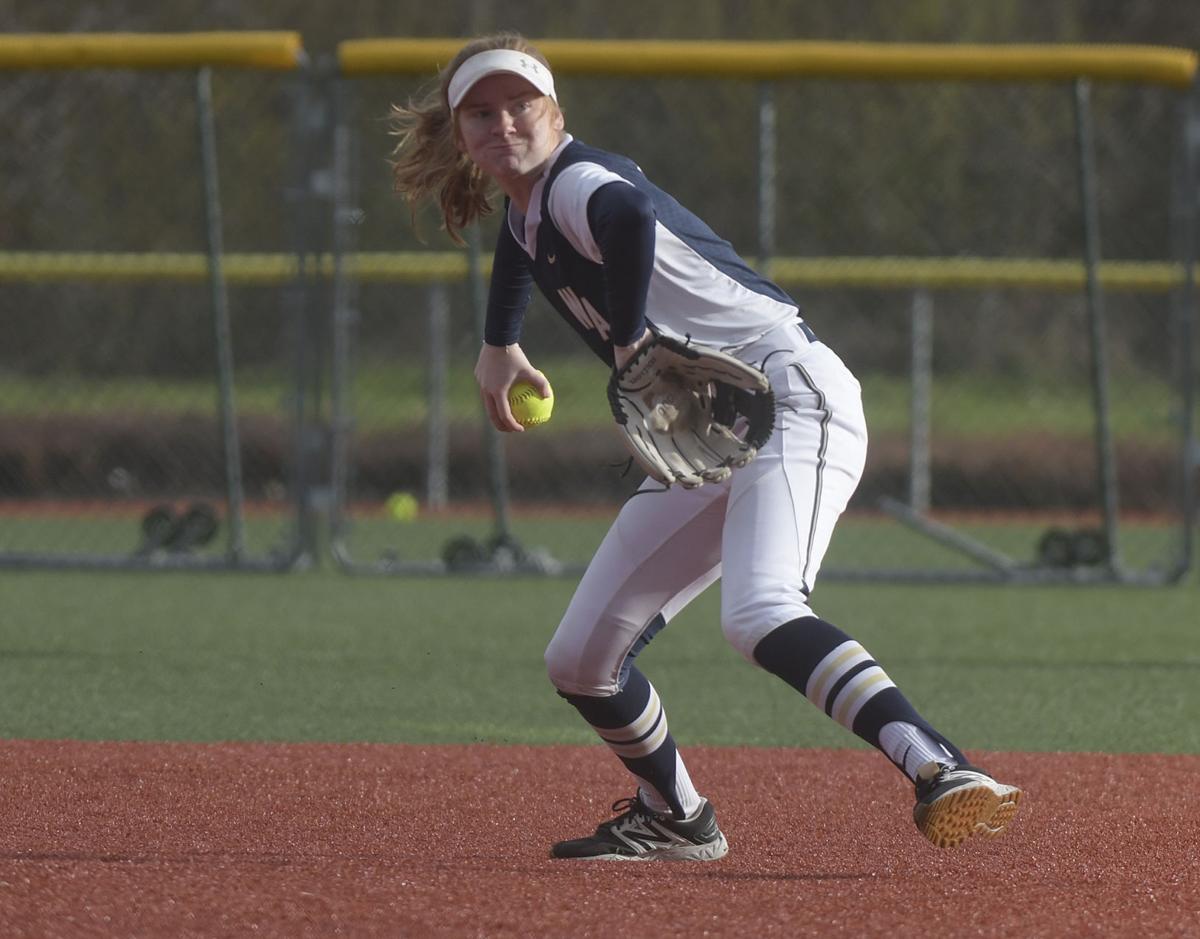 West Albany shortstop Ellie Babbitt throws a runner out in a game against Etna, California, in Medford back in 2019.

When Ryan Borde was first hired as West Albany High’s softball coach in 2016, he was constantly told about the group of ultra-talented seventh graders who would eventually reach his program.

Ellie Babbitt, Presley Jantzi, McKenzie Kosmicki and Riley Ramirez had been playing softball together since they were eight years old, and the group of friends all planned to eventually play high school ball for the Bulldogs.

All four were playing for high-profile travel teams that summer, so Borde went to see what all the hype was about.

“My jaw dropped watching them,” Borde said. “You could just see the talent. You knew there was something special with those four."

Five years later, Babbitt, Jantzi, Kosmicki and Ramirez are still best friends and form the nucleus of one of the most talented softball teams in the state. As sophomores in 2019, they helped carry the Bulldogs to the state semifinals before falling agonizingly short of the title game. As it turned out, that was the last game they would play for nearly two years after the pandemic wiped out the 2020 season and has put hopes of a 2021 postseason in jeopardy.

With their individual success on the travel ball circuit, any of West’s four seniors could have transferred to chase a state title or more scholarship offers at a bigger school. But the thought never crossed any of their minds; they always valued the idea of winning a state title together — more importantly, they wanted to win it at West Albany. That is why the time and opportunities lost to the pandemic have been particularly painful.

“That’s all we ever dreamed about growing up. That’s why we started playing softball,” Kosmicki said. “We all wanted that together. We’ve known it was in the cards, and that’s so rare for a normal team to know they have a chance to win.”

As their senior year winds down, it appears the best they can hope for is a 15-game spring season that, as of right now, is not guaranteed to include a state tournament. While the seniors could be left wondering what might have been during the last two seasons, they are also extremely grateful for the memories they have forged playing together for nearly 10 years.

“They’re like cousins to me,” Babbitt said. “That’s how we kind of explain each other to everybody when we’re asked. We do everything together. We’ve played together our whole lives.”

At the end of this school year, though, they will head off in their own directions. Babbitt has committed to play at Portland State, Jantzi has committed to University of Montana and Kosmicki has committed to Mt. Hood Community College. Ramirez has had offers to play college ball as well, but is still weighing her post-grad options and did not wish to be interviewed for this story.

“It’s crazy to think we’re seniors,” Jantzi said. “But my experience with them has always been so good. I consider them all my sisters and growing up with them helped a lot.”

In the ultra-competitive world of travel softball, it is rare for more than one or two players from a school to land on the same team. For most of their childhood and middle school days, though, the foursome stuck together on some of the best club teams in the northwest.

Eventually, teammates just started referring to them as “the fab four” and they were constantly told how lucky they were to all be playing for the same school.

Travel ball can be an extremely lonely, stressful experience; tournaments are expensive, high-pressure events and the only way to gather scholarship offers is to make your play stand out. It’s not an easy thing to do when you’re squaring off with the best players on the west coast every weekend.

Having close friends to constantly lean on during those moments was immensely valuable for West’s four seniors.

“It comes with a lot of stress that only other softball players can understand,” Kosmicki said. “We missed out years — we didn’t get to go to county fairs. We didn’t get to do the normal summer stuff that our friends back home did because we were constantly playing softball. It’s been a blessing, though. We went to New York. We went to Arizona. We’ve had success in multiple states and we were able to share those experiences with each other. We were there for each other when we had bad games. It’s been a roller coaster for all of us and it’s cool to share those emotions with people that understand.”

Aside from finding success on the field, they also made lifetime memories traveling the country together. Whether it was hitting the Pearl Street Mall in Boulder, Colorado, or spending off days at Huntington Beach, they always tried to make the most of the moments spent away from the field.

“We kind of have little traditions that we always do together,” Babbitt said. “Girls on our teams were from all over, and since we were all from Albany, we were like peas in a pod when we’re traveling. It’s a good time; it’s so habitual, because we’ve always been with each other.”

Babbitt, Jantzi, Kosmicki and Ramirez all began playing travel ball together for the Albany Heat, and, ironically, their first practice together took place at the West Albany softball field. From there, they later played together on the Oregon Titans.

Some of them took different routes after that, but they eventually all ended up playing together again for the prestigious Northwest Bullets.

With the Bullets in 2015, they reached the Premier Girls Fastpitch National tournament — one of most coveted accomplishments in the sport — after a gutsy win at a regional qualifier in Arizona.

“We gained our confidence from that game,” Kosmicki said. “From then on, we knew we were very, very solid. We knew how good we were.”

It didn’t take long into their high school careers for the hype to follow. The Bulldogs opened 2019 as the No. 1-ranked 5A team in the state with Babbitt, Jantzi, Kosmicki and Ramirez, who were just sophomores at the time, occupying four of the top five spots in the batting order.

Although they didn’t reach their ultimate goal of a state title, it was another season filled with memorable moments that only helped them grow closer.

During the state quarterfinal game against Pendleton, Babbitt smashed a three-run homer with Jantzi and Ramirez on base that flipped the game in favor of the Bulldogs and helped push them to a 9-3 win.

“It was just a memory I'll never forget,” Jantzi said. “Just the look on everyone's faces made it 10-times better. Knowing those are my closest friends, it’s something I’ll always remember.”

If the 2021 season does indeed take place without a postseason, it will be a bittersweet couple of months for West’s seniors. They feel like the hard work they’ve put in helped them become capable of winning a state title all four years of high school — something not many athletes are fortunate enough to say. But they were misfortune enough to be in that position at the exact wrong time.

They are desperately hoping they will get one last shot at a title, but are also simply glad to be together for one last run with the Bulldogs, however it unfolds.

“We’re really pushing for it. The girls are working really hard at practice,” Babbitt said. “No one’s messing around this year. Because we’re just thankful that we get the opportunity to be out there.”

After months of uncertainty surrounding the sport, high school football now has a clear path forward in Oregon.

COVID restrictions have all but dashed the hopes that West Albany High seniors Presley Jantzi, left, Ellie Babbitt and McKenzie Kosmicki can compete in a state title game their senior year. These talented Bulldogs are going to be bring their bats to Montana (Jantzi), Portland Sate (Babbitt), and Mt. Hood Community College (Kosmicki).

West Albany's Presley Jantzi catches a fly ball while McKenzie Kosmicki backs her up in the 2019 playoffs against Pendleton.

West Albany shortstop Ellie Babbitt throws a runner out in a game against Etna, California, in Medford back in 2019. 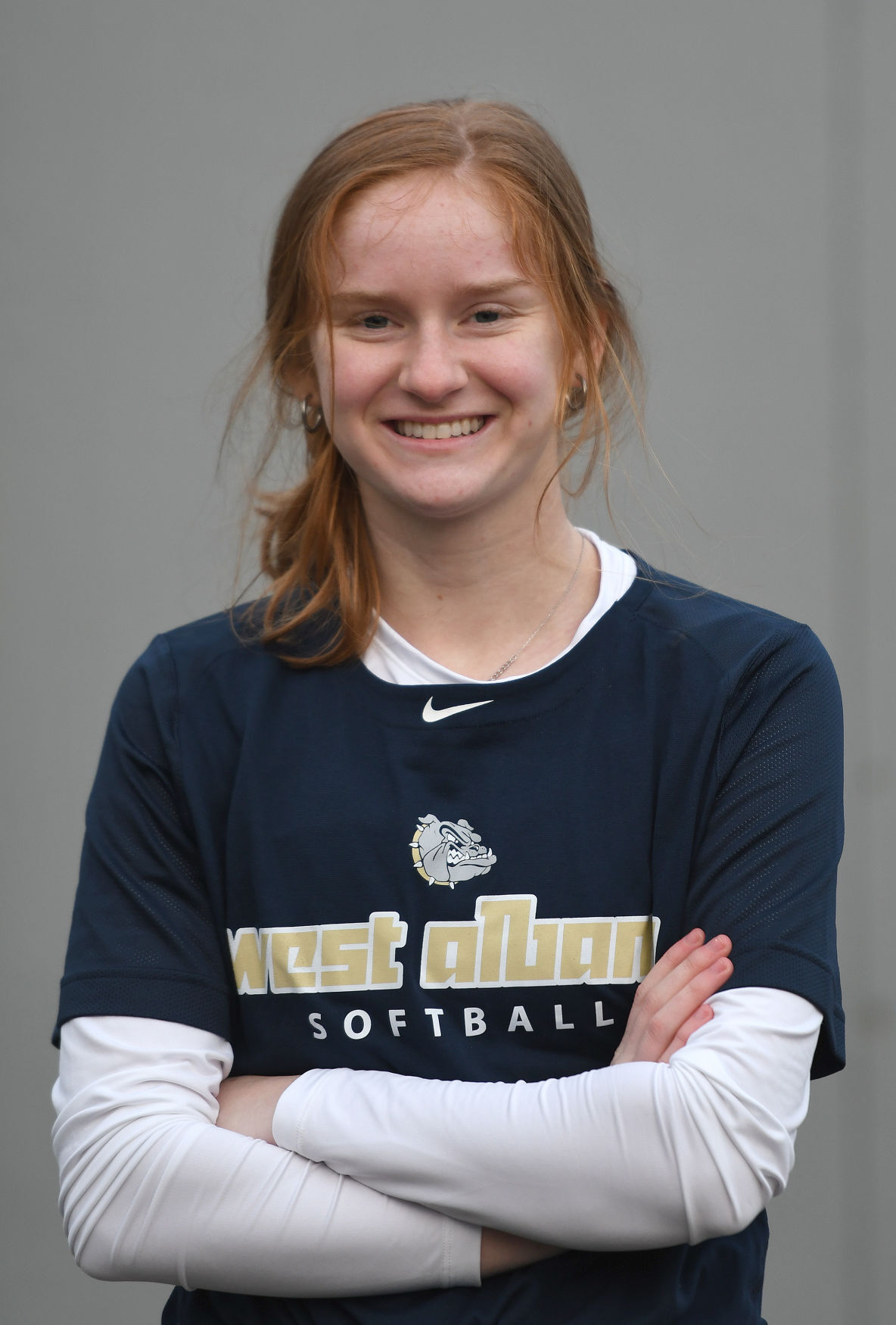 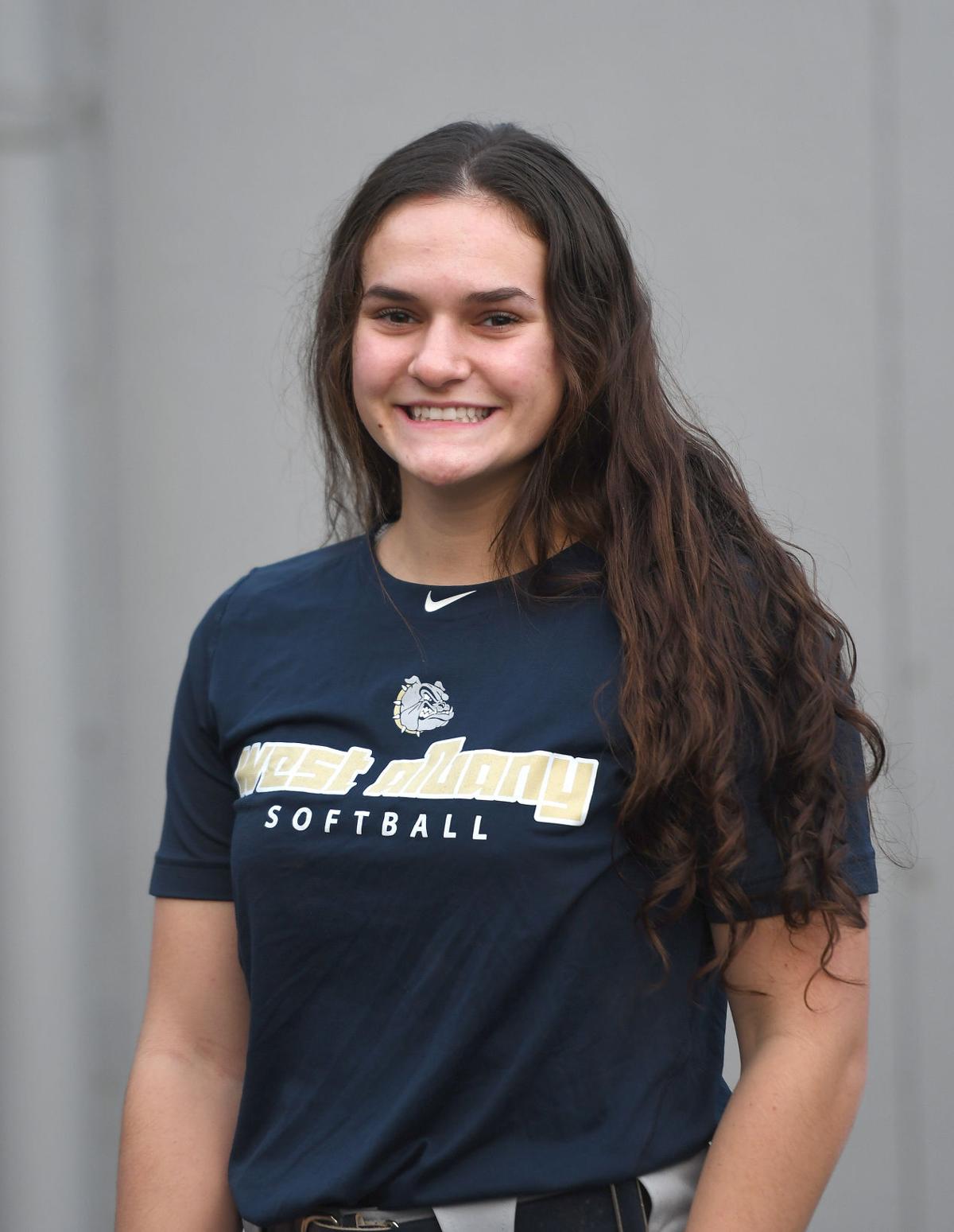 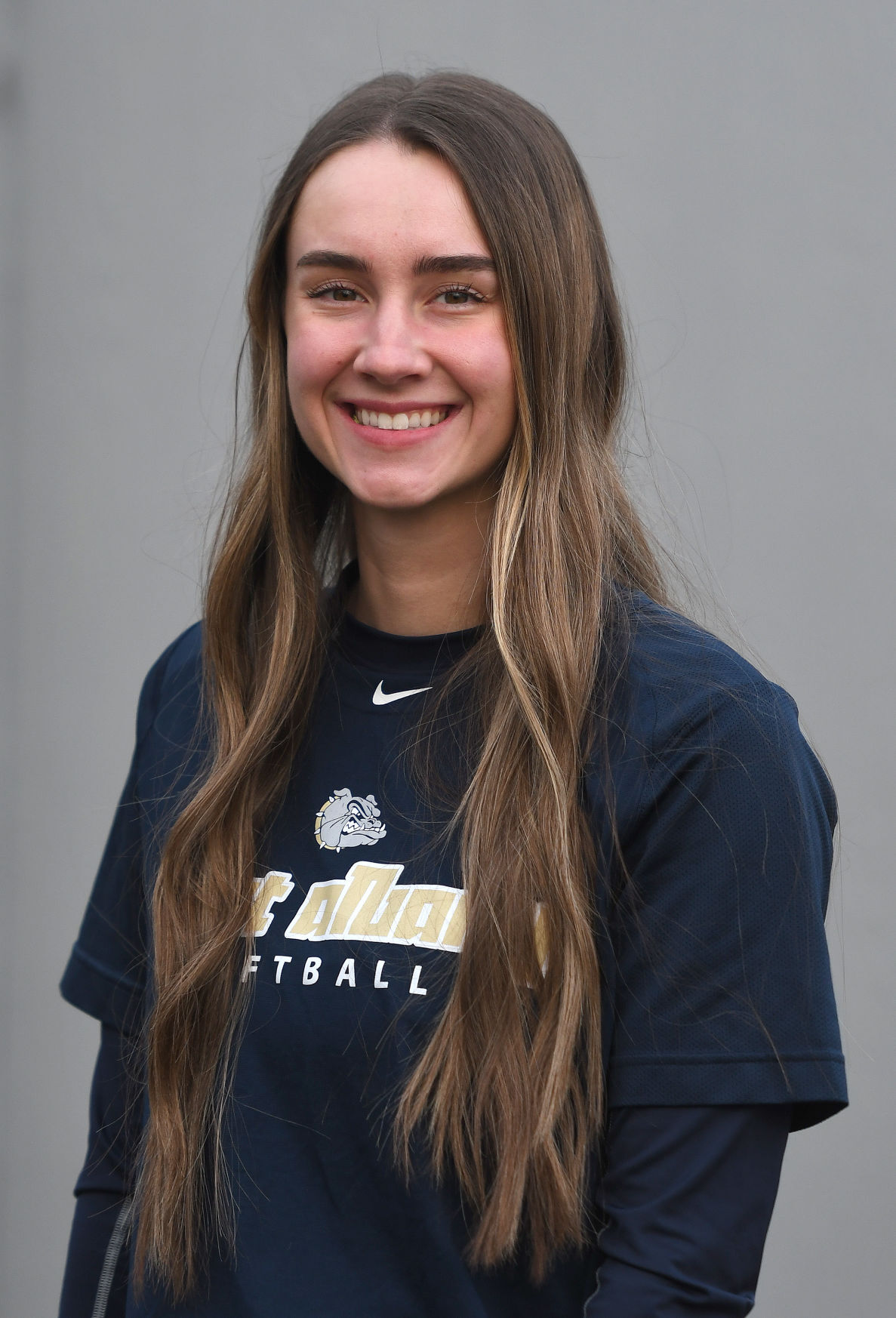