Prep sports: Madeline Nason rises to the top
Share this
{{featured_button_text}}
1 of 3 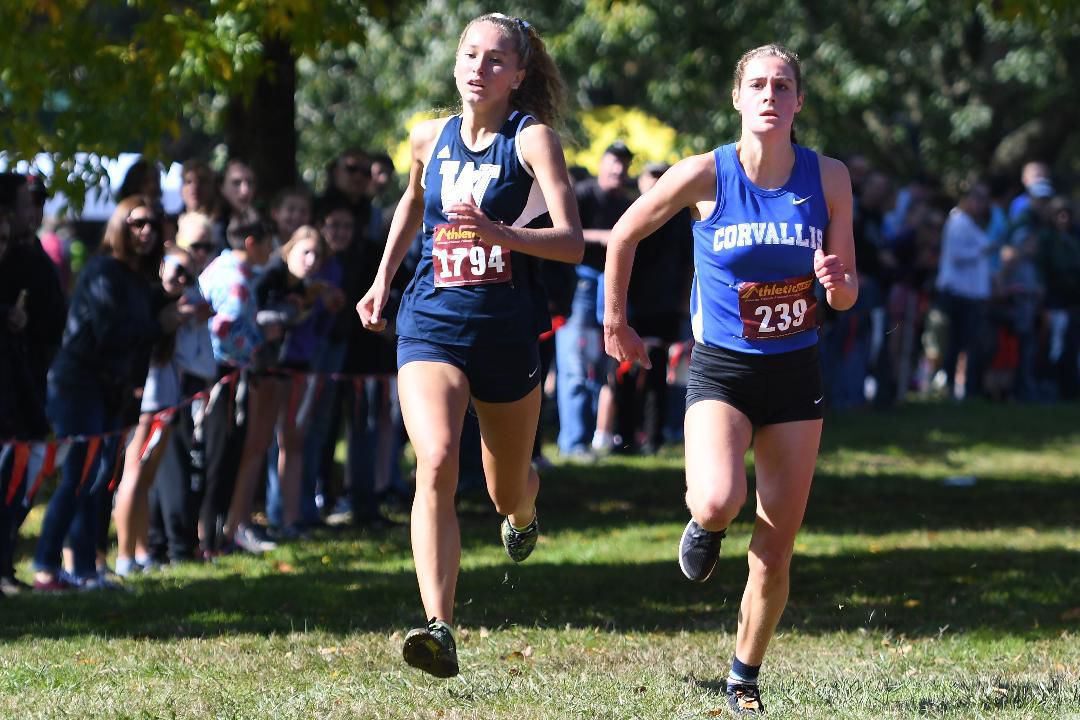 Madeline Nason of Corvallis, right, surges past Samantha Prusse of Wilsonville to win the Harrier Classic cross-country meet at Albany's Bryant Park last October. Nason went on to win the 5A individual state title. Prusse was second in that race as well. 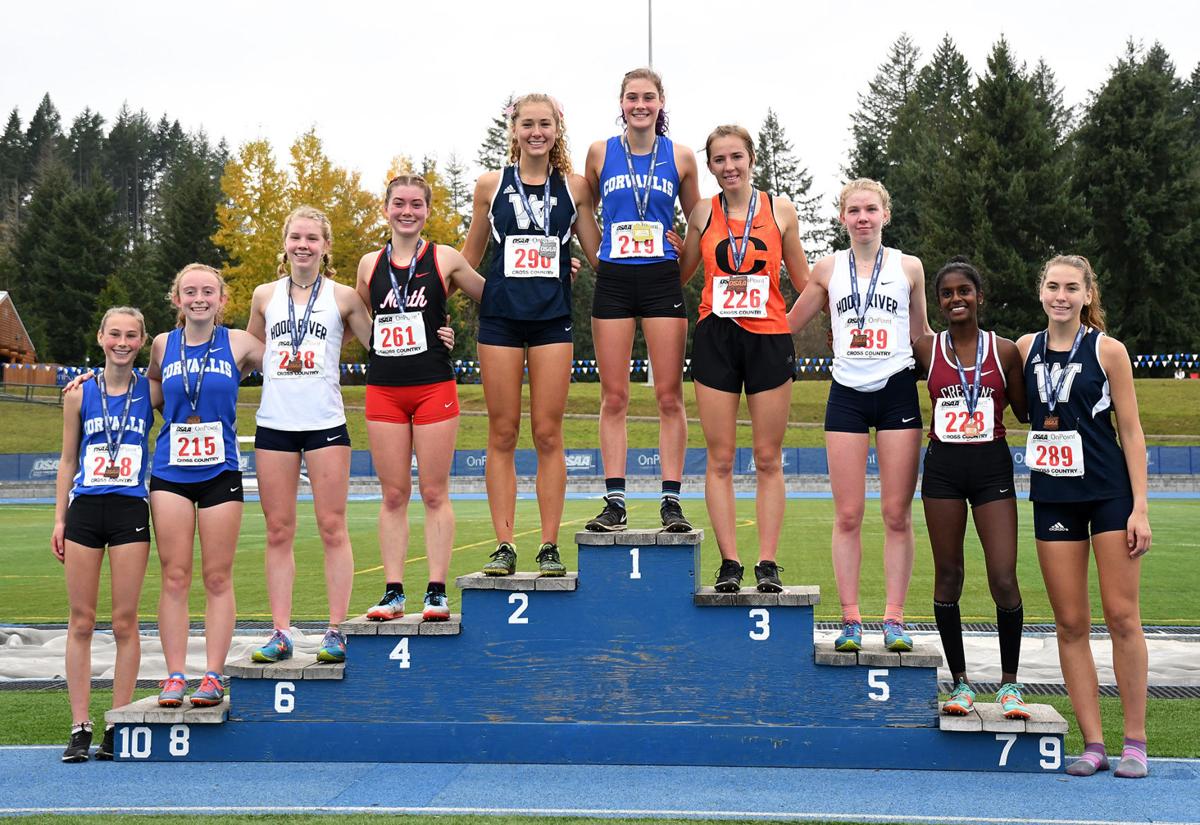 Corvallis sophomore Madeline Nason stands atop the podium after winning the 5A girls cross-country state title. 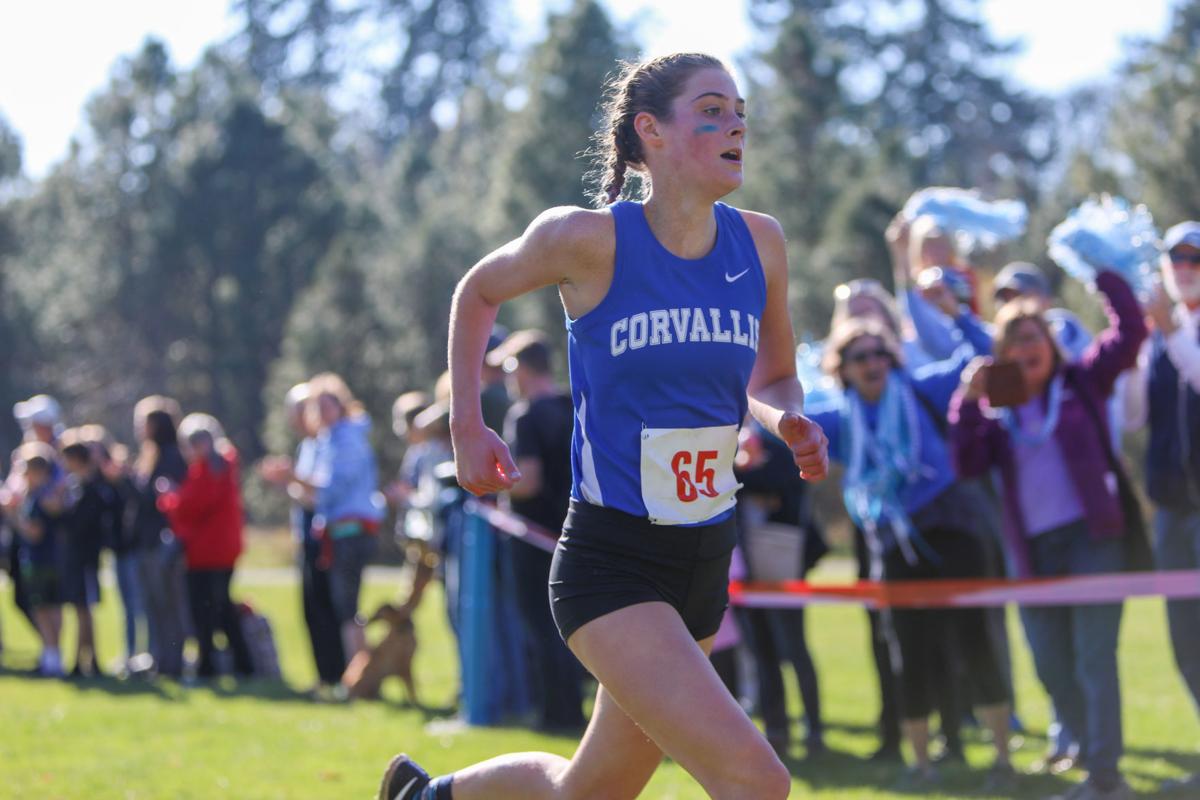 The Corvallis High School star finished third at 3,000 meters and fourth at 1,500. She set a new personal best in the longer distance and just missed one at the shorter after establishing a new PR a week earlier at the district meet.

She followed that up by reaching the pinnacle in cross-country last fall, winning the 5A girls individual state title while also leading the Spartans to the team championship with the help of three standout freshmen.

Nason is spending this spring away from the track to focus on swimming, where she’s an accomplished club competitor, but she’s already looking forward to next fall to see what she and her team can do next.

“I’m very excited to get back together with the team and train and compete together,” Nason said.

Nason has successfully navigated busy training schedules for distance running and swimming while continuing to compete at a high level in both.

She said it has worked out well because the end of cross-country overlaps the beginning of the club season, which means she doesn’t miss much if any hard training in the pool when she’s focused on her distance running.

Corvallis High coach Mark Hulburt doesn’t normally allow his athletes to compete in others sports during the cross-country season. But Nason showed that she could make it work while remaining one of the top runners in the state.

“She’s very dedicated and she has discipline, and you can’t coach that,” said Hulburt, who has coached for more than two decades. “She’s focused with her swimming, but she’s very focused with cross-country.”

The two, coach and athlete, talked every week during the fall about managing her training and agreed that she would back off on her swimming during the last three weeks of the cross-country season.

Nason, a member of the Corvallis Aquatic Team, was putting in a heavy load collectively, but it didn’t slow her down.

“I found the swimming was very good for her. I even had her swimming two days before state,” Hulburt said. “It really does save the legs. Especially at the end of the season, her legs were tired. She never missed a hard workout. She still did the distance stuff. It just worked right.”

Added Nason: “I think distance training for both work really well together.”

She proved that, and this spring she has hopes to see what’s possible with swimming as her sole objective.

“I’ve always started the swim season late because I want to focus on cross-country or track,” she said. “But I wanted to try to see how far I could get with a full swim season.”

Last spring, while compete in both sports, Nason was especially pleased with her results in the 1,500 “because I did a lot more speedwork on the track.”

Nason said performing so well at the state meet wasn’t necessarily motivation for summer training and the fall cross-country season because she separates the two seasons. But it showed her she could run side by side with some of the top 5A distance runners.

During the fall, as Hulburt has done with all his top girls runners, he had Nason practice with the boys team, giving her someone to chase while getting the most out of her training.

At state cross-country, she faced several of the same elite athletes that she battled with on the track. In addition, she had already defeated some of those same competitors in meets earlier in the season while winning five individual titles.

One of those was Wilsonville’s Samantha Prusse, whom Nason had edged at the finish line by six-tenths of a second for the win at Albany’s prestigious Harrier Classic five weeks earlier.

At state at Lane Community College, Nason pulled away from the lead pack with a surge over the final half mile to win the 5,000-meter (3.1-mile) race in 17:51.6, beating the PR she set just a week earlier by more than 20 seconds. Hulburt geared the late-season workouts to produce a sub-18-minute time, and Nason didn’t disappoint.

“My goal was to run fast,” Nason said. “I knew that I needed to pick it up at the end. I felt that I was capable of doing that and maintaining that for the rest of the race.”

Prusse was runner-up, more than 14 seconds back.

Nason became the school’s first-ever individual cross-country champion in the sport, boys or girls, and helped the Spartans to the first girls title in the sport. Corvallis won three A-1 boys team titles from 1965-67 while coached by Lyle Fagnan.

“It was pretty awesome, especially since our team was able to win state together,” Madeline Nason said.

Betts was eight seconds faster and Avery Nason just five seconds slower than Madeline Nason ran at state as a freshman, taking third but just three seconds behind the winner.

Plus, Hulburt has three incoming freshmen this fall for which the coach has high expectations.

Hulburt said he had a feeling Madeline Nason was set up for a special state race after a new personal best on the district course at Crystal Lake Sports Park. Her training had her at a peak level, and the coach didn’t have to do much from there.

“She was ready,” Hulburt said, “and when she’s focused you just stay out of her way and let her go.”

Five area players were named to the Mid-Willamette Conference boys basketball all-league first team, as voted on by the conference’s coaches.

Madeline Nason of Corvallis, right, surges past Samantha Prusse of Wilsonville to win the Harrier Classic cross-country meet at Albany's Bryant Park last October. Nason went on to win the 5A individual state title. Prusse was second in that race as well.

Corvallis sophomore Madeline Nason stands atop the podium after winning the 5A girls cross-country state title.