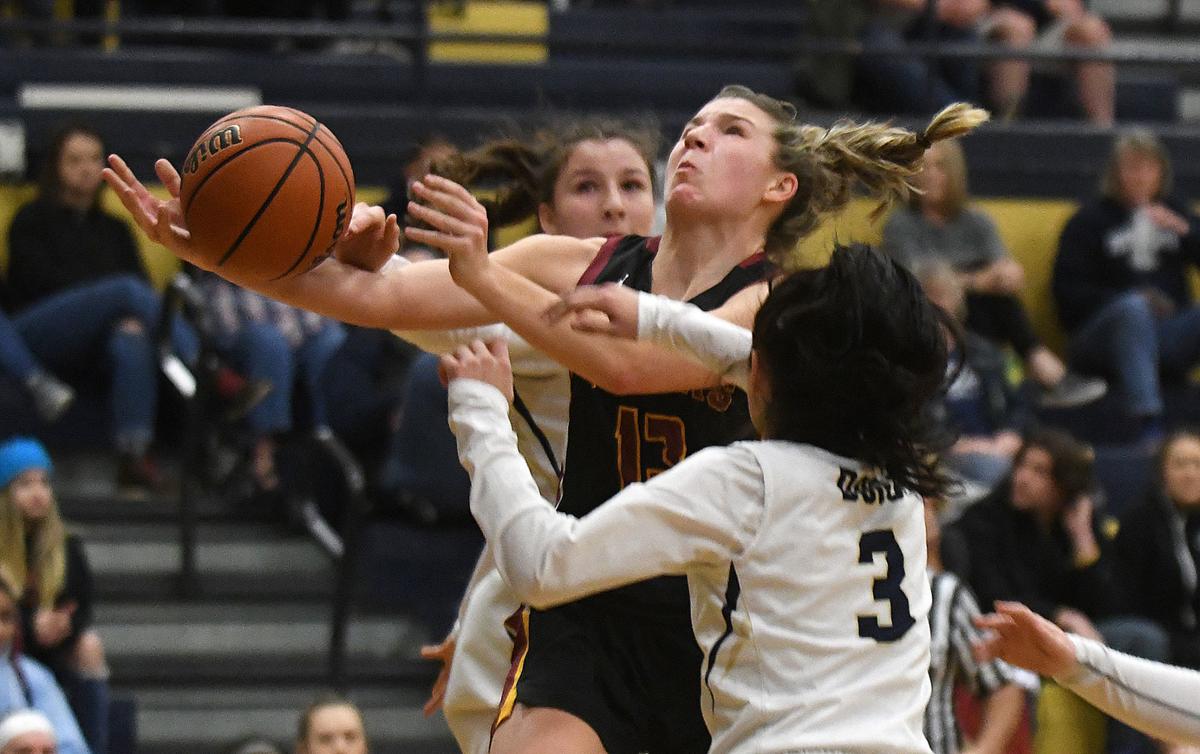 Crescent Valley's Ana McClave gets fouled while shooting in between the West Albany defense. McClave finished with 22 points to lead the Raiders to the win. 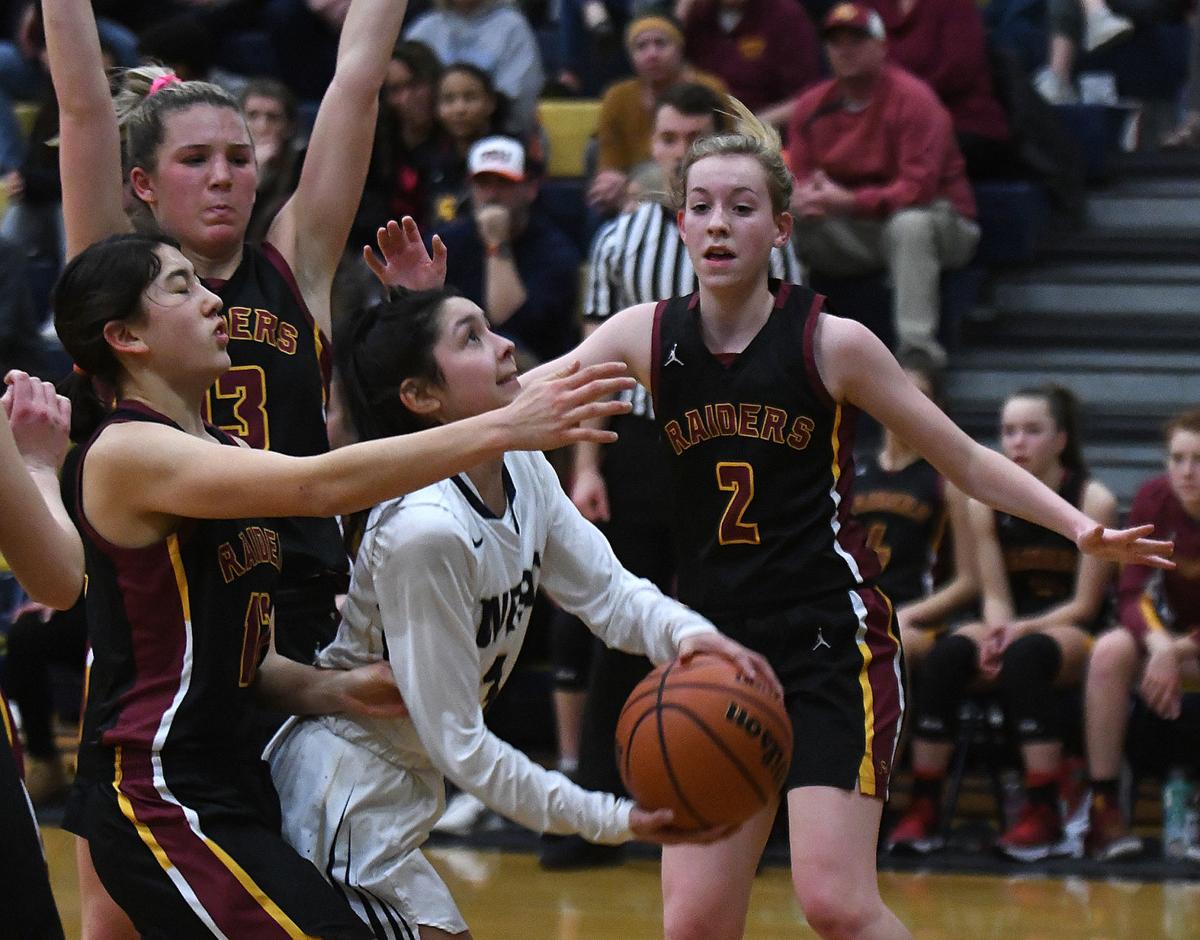 West Albany's Lily Ruiz shoots against the Crescent Valley defense. Ruiz has taken over the Bulldogs' ball-handling duties with the absence of Lyndsay Bailey.

All eyes in Mid-Willamette girls basketball are on the standings and the chase that’s well underway for the four 5A state playoff berths that the conference will receive with the conclusion of the regular season at the end of the month.

Crescent Valley secured its spot in the hunt Friday night with a 56-46 win at No. 9 West Albany.

Silverton is the MWC front runner, with Lebanon, Central and Corvallis all in the mix along with CV and West. The conference could get a fifth spot in the 16-team OSAA bracket if its fifth-place team has a better power ranking than the Midwestern League’s No. 5 when the regular season concludes.

CV got its first win Friday against any of the other contenders. Outside a 16-point loss to Silverton, the four remaining defeats were by 10 points or fewer.

“It feels great because I knew we had it in us. It’s good and it builds our confidence,” McClave said.

Gabby Bland and Ellie Herber added 10 points apiece for the Raiders. Lily Ruiz had 17 and Sarah Ball and Brooklyn Strandy eight each for the Bulldogs.

West trailed by 11 at halftime and 14 early in the third quarter before making three significant runs at CV. The Raiders answered every one, never giving up the lead.

A Ruiz 3-pointer finished a 9-0 Bulldogs run in the third that closed the gap to 40-37. That stretch included two baskets and an assist from McKenzie Kosmicki. McClave responded with three straight points in a 5-0 run by her team to close the period.

A 7-1 West run in the first four minutes of the fourth had the home team back within two. Carley Robb started it with a 3-pointer, Kendra Kosmicki got a steal and basket and Ruiz drove for a contested layup.

The Raiders were 4 of 12 at the foul line in the fourth quarter, including two misses on the front end of 1-and-1 opportunities, before McClave made two straight with 1:03 left to extend the CV lead to 51-44. Herber scored in transition after a West miss.

“That’s the thing for us. We’ve been in close games and we haven’t found a way to finish,” Raiders coach Eric Gower said. “We just needed to make sure we found a way tonight. I thought we kept our composure better and were able to stick through it.”

West trailed 19-12 after one quarter, as CV made five 3-pointers in the first eight minutes, and was never able to dig out of it.

“We just got off to another slow start. When we have to expend so much energy to climb back into the game it’s hard to finish sometimes,” Bulldogs coach Shawn Stinson said. "I’m proud of them. They battled and stayed in it.”

West was playing its third straight game without sophomore point guard Lyndsay Bailey due to injury. Ruiz has been filling a ball-handling role with her teammate sidelined. The loss has especially hurt the Bulldogs’ depth, leaving them with seven varsity-only players.

“We’re functioning and moving quite well without her,” Stinson said. “I think there’s just the normal confidence that comes with Lyndsay. She sees the floor so well. She’s doing a great job.”

Both teams jump back into conference play Tuesday against fellow playoff contenders with Crescent Valley at Corvallis and West at Central.

“I just want to focus on playing our best basketball” as opposed to thinking about playoff positioning, Gower said. “We’ve still got stuff we can improve on. I’m happy with how we are improving. We’re a better team than we were a month ago.”

Stinson said his players are well aware of where they’re at in the standings. He doesn’t spend time discussing it.

“We’re talking about one game at a time,” he said. “I just told them if we take care of business and beat the teams we should beat we’ll be fine.”

Ryann Gregg’s college volleyball career is sneaking up on her.

Plenty of local coaches and athletes are holding out hope that high school sports will still happen this spring.

Crescent Valley's Ana McClave gets fouled while shooting in between the West Albany defense. McClave finished with 22 points to lead the Raiders to the win.

West Albany's Lily Ruiz shoots against the Crescent Valley defense. Ruiz has taken over the Bulldogs' ball-handling duties with the absence of Lyndsay Bailey.