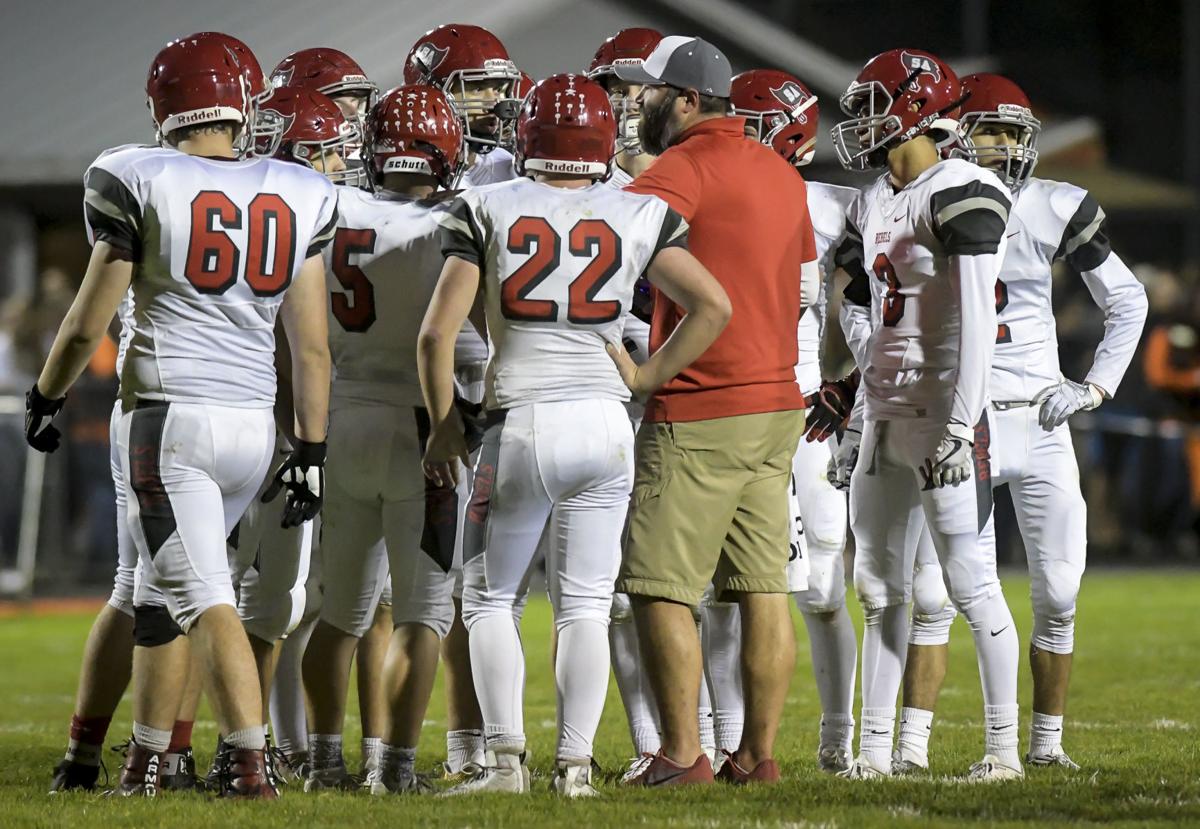 Jeff Louber talks to the South Albany defense during a 2017 game. Louber is the RedHawks' new head coach. 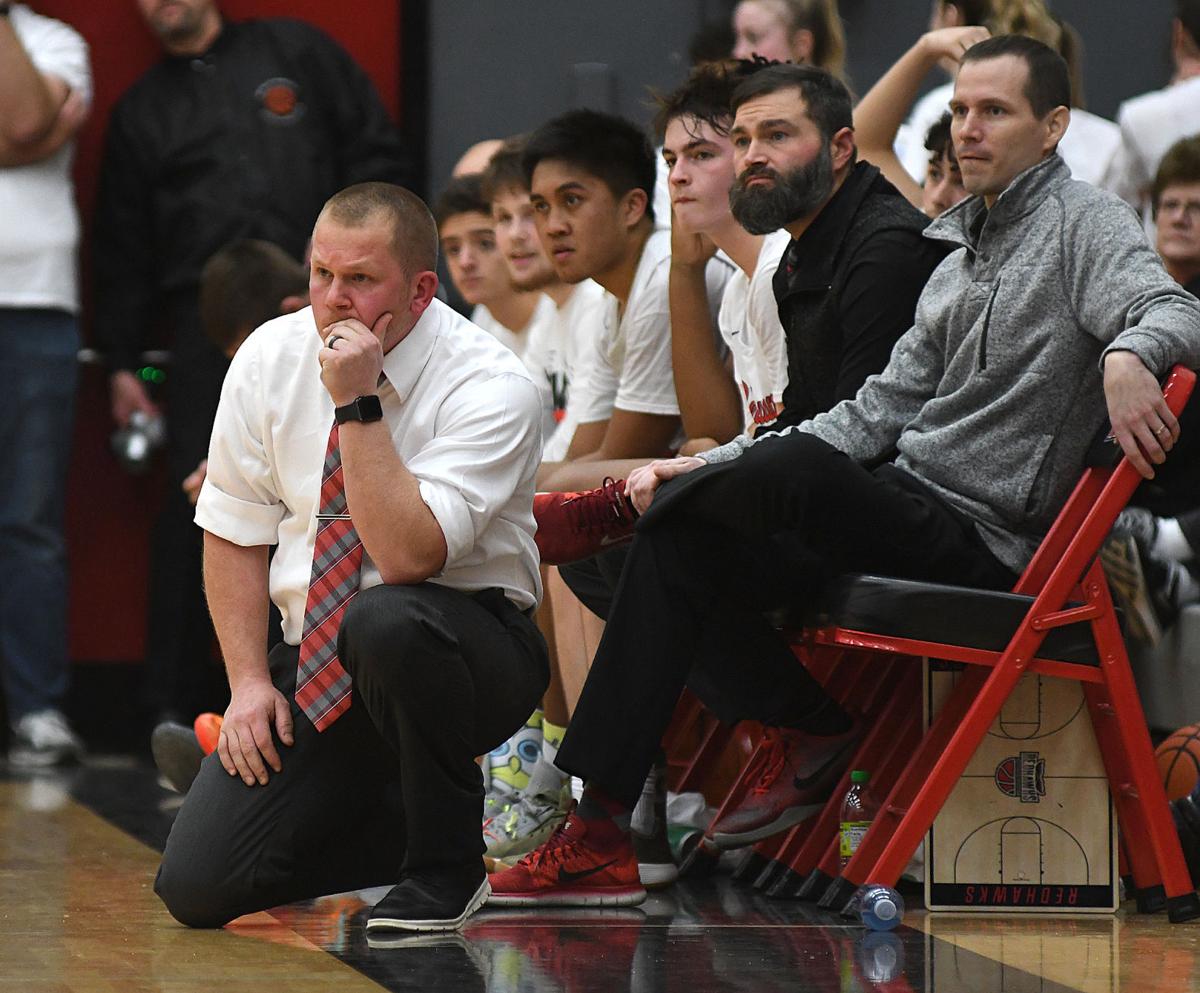 Jeff Louber, with beard, looks on during a South Albany boys basketball game last winter. He is the RedHawks' new footballl head coach.

He’s been a part of three state title teams at West Albany and two conference championships at South Albany, his alma mater.

It’s now his opportunity to lead from the front.

Louber has been hired as South’s head coach after spending the past six seasons in the RedHawks’ program, the last five as defensive coordinator.

“I’ve had enough success where I know what it takes to be successful,” he said. “Really, when push comes to shove, Xs and Os are great. But it’s really about getting kids motivated to play for each other and to play for you. I think that’s the biggest asset that I bring.”

Louber replaces David Younger, who resigned from the head coaching position in November after last season. The RedHawks were 28-42 overall and 22-29 in conference play in his seven seasons leading the program.

Louber and Younger coached together for two seasons as West Albany assistants. Louber moved from West to South when Younger became head coach in the fall of 2014.

“We developed a good friendship and I had a lot of confidence in his abilities,” Louber said. “When he joined South I knew that I wanted to go over there and be part of the program that he was going to build there.”

Louber was a varsity boys basketball assistant for the RedHawks this past winter. He’s also the head coach for the school’s girls track and field team.

He said he plans to continue doing both because he loves coaching, regardless of the sport. He enjoys positive interactions with the young athletes and remembers the positive impacts his high school coaches had on him and wants to pass it on.

Louber’s high school football coach as a player was Shane Hedrick, currently the head coach at Willamina. Hedrick previously coached a total of 19 seasons during two different stints at Central. He was also an assistant at Willamette and Western Oregon.

“I’ve been surrounded by so many great coaches over the years. I learned a lot from Randy Nyquist, a lot from Jim Phillips,” Louber said of the former West Albany coaches. He also mentioned Brent Belveal and Mike Bussard.

“I always desired to be a head coach, but I’ve always been surrounded by coaches I admired and I had absolutely no problem just being an assistant for them,” Louber added.

“Jeff is going to do an awesome job as a head coach,” Younger said in a text Friday.

A 1998 South graduate, Louber was hired as freshman football coach at West Albany as his first job out of college. He was also linebackers coach and defensive coordinator in his time with the Bulldogs.

He was linebackers coach in his first year at South Albany before becoming defensive coordinator the next season.

Peck says Louber is a knowledgeable coach with a good defensive mind. His years in the program, familiarity with the players, being a South alum and the continuity that his presence brings make Louber a good fit for the job.

“I think that’s definitely in the best interest of the kids and the program, having Jeff and his experience,” said Peck, who coaches with Louber in track.

Peck said Louber has been proactive in encouraging players to continue working out and searching for the next leaders of the program.

“He’s got the best interests of the kids at heart,” Peck said. “As we try to tip-toe our way through the restrictions that we have with this pandemic, he’s trying to go above and beyond making sure he reaches the kids the best he can.”

Louber takes over a program that was 2-7 the past two seasons, tying for seventh in the 10-team Mid-Willamette Conference last fall. The RedHawks have been decimated by injuries the last two years, starting three freshmen on varsity at the end of last season.

“The last two years we’ve been so incredibly young. We’ve been looking forward to the time when our kids’ maturity physically and mentally matches our opponents,” Louber said. “We’re really thinking this year is going to be a big turnaround for us. If we don’t have a season … those seniors, my heart just breaks for them.”

He was hired in his new position just before the school was closed for quarantine and wasn’t able to meet with his players. But he has had contact since through teleconferencing and messaging.

District policy regarding the coronavirus will keep Louber and his staff from meeting with student-athletes in person until July 1. But Louber is making plans as if the season is going forward and make changes as needed.

Louber’s son Max, who will be a sophomore in the fall, is a football player.

Louber is a science teacher and also coordinator of the school’s PRIDE program, which recognizes and awards students for positive behavior.

He says being the football coach and having a job in the building is “critical.”

It allows him to have direct, daily contact while building relationships with his players and to address teachers’ academic and other classroom concerns.

When Division I schools started coming with football offers earlier this spring, it reminded Joe MaQatish of his potential if he dedicated him…

Jeff Louber talks to the South Albany defense during a 2017 game. Louber is the RedHawks' new head coach.

Jeff Louber, with beard, looks on during a South Albany boys basketball game last winter. He is the RedHawks' new footballl head coach.