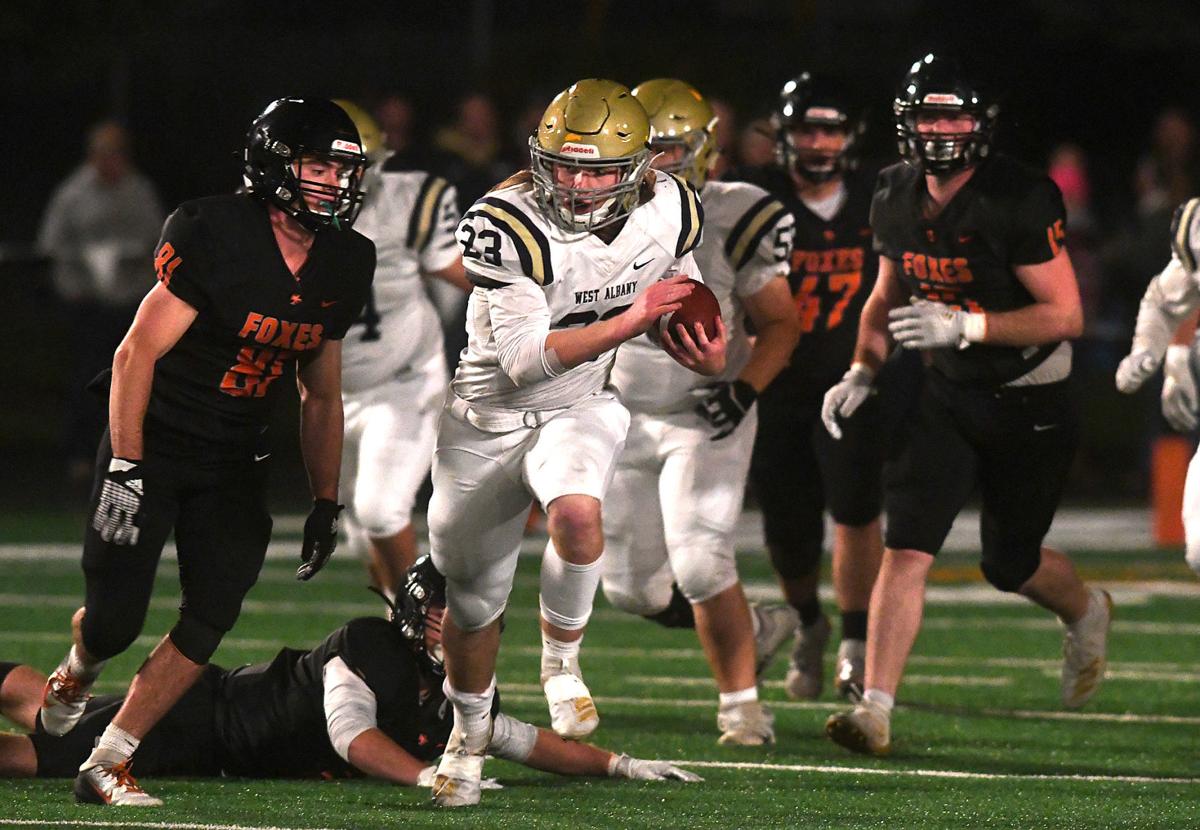 West Albany's Porter Phillips breaks away from the Silverton defense in the first quarter. Phillips rushed for 228 yards and two scores in a 28-21 win. The Bulldogs won the Mid-Willamette Conference title with the victory. 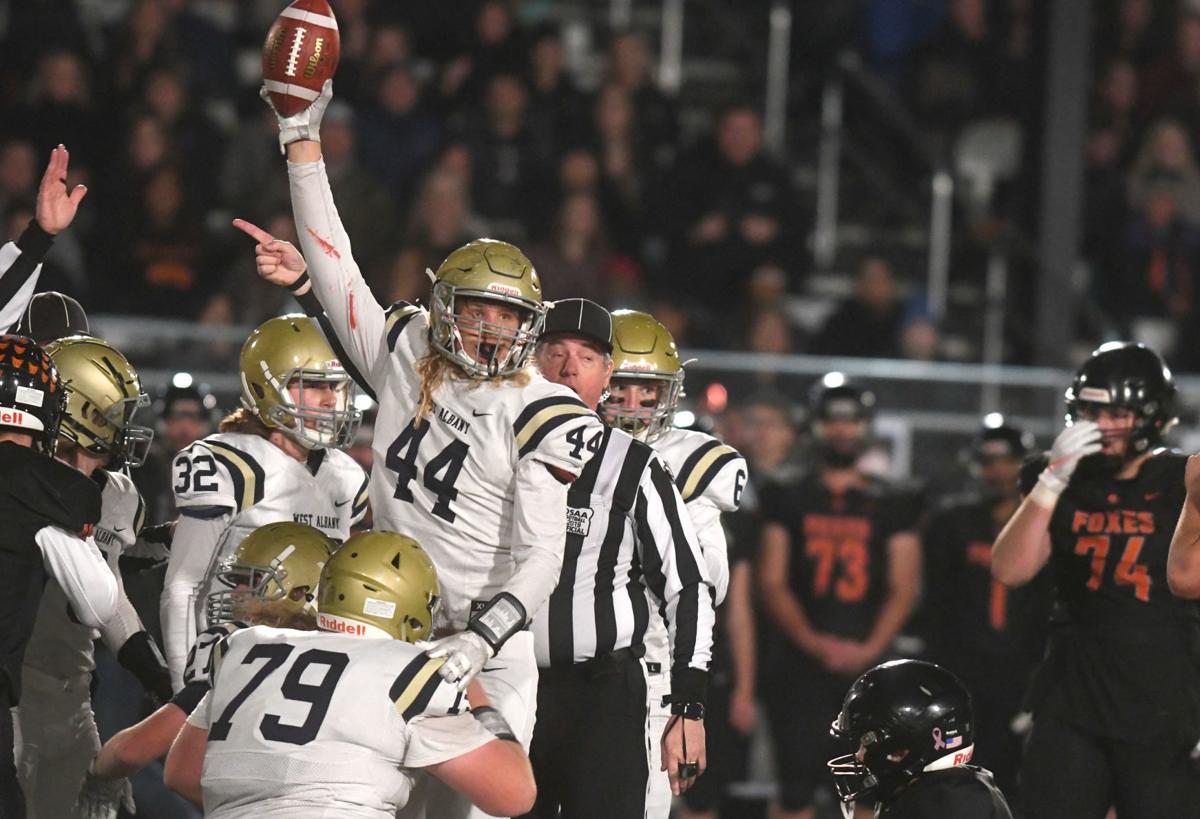 West Albany's TJ Zimmermann holds up a football after recovering a Silverton fumble late in the second quarter during the Bulldogs' win. 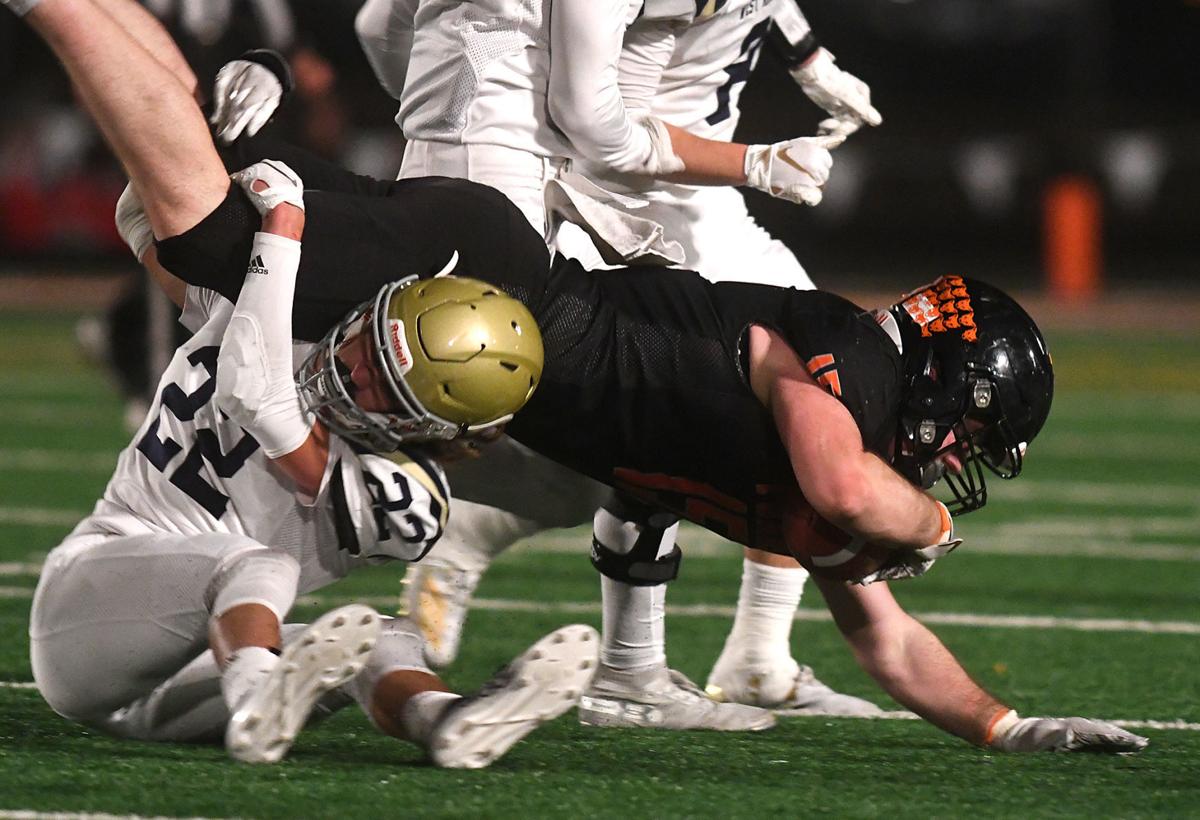 SILVERTON — Pushed to make plays with Silverton putting the pressure on late, West Albany High converted every one necessary to stay on top.

Another game between the Mid-Willamette Conference’s top two football teams and undefeated squads came down to the final minutes Friday night.

West got game-changing results, first on defense with a fourth-down stop at its own 32 and then the offense getting two first downs behind the running of Porter Phillips to run out the clock.

The Bulldogs, who had to share the conference title with the Foxes last year after a home loss to Silverton to end the regular season, kept it all to themselves this time with a 28-21 victory at McGinnis Field.

Fourth-ranked Silverton (8-1, 8-1) closed within seven points for the second time in the second half on quarterback Jordan McCarty’s 1-yard touchdown on a keeper with 6:04 remaining. The offense for No. 2 West Albany (9-0, 9-0) made a quick exit, and the state’s best defense was back on the field.

The Foxes reached the Bulldogs 31 after six plays before a false start on 4th-and-1 backed up the home team 5 yards.

“Now we were kind of in our bullseye zone to make that stop,” said West coach Brian Mehl. “They were making a lot of those third-and-1s, third-and-2, third-and-3. They were doing what Silverton does. They grind it out, they get those first downs and they take the clock away.”

On the following snap, McCarty ran right and was met by Chance Hendrickson, who was joined soon after by Phillips to take down the quarterback 2 yards short of the first down with 1:48 left.

“Our defense stepped up big on that fourth down. Chance had a great tackle on that guy and I came and cleaned it up,” Phillips said. “It was just a great overall experience. Our offensive line after that turnover, they got a great push and I just followed them. It was awesome.”

Silverton had just two timeouts left when West took possession for the final time. Phillips and the Bulldogs gashed the Foxes for 12 yards and then 6 more, forcing Silverton to use both its remaining clock stoppages.

Phillips then finished the job with a 10-yard run, and quarterback Carson Van Dyke squeezed the final seconds off the clock with two kneel-downs.

“It’s awesome to see because you’re rooting for every single person on the field when you’re on the sideline,” Van Dyke said of both sides contributing. “When they get their job done it just motivates you more. You’ve got to back them up, you’ve got to do your job.”

Phillips finished with 228 rushing yards and two touchdowns on 28 carries.

The senior nearly had a third score, but he was tackled at the Silverton 1 after the Foxes had closed within 21-14 on Hayden Roth’s 14-yard touchdown run with 11:22 to play.

But the Bulldogs did eventually finish the drive, with Blake Bowers scoring from 6 yards out on a sweep play after a false start and incomplete pass following Phillips’ long run.

Silverton came right back down and scored again on McCarty’s keeper to make West earn it.

“We kind of just stayed ahead tonight. We didn’t exceed it,” said Mehl, whose team took the lead for good on Phillips’ 1-yard touchdown run with 51 seconds to halftime. “We missed an opportunity right before half to make a play and gain control of the game like we have all year.”

The Bulldogs recovered Silverton’s fumbled snap at the Foxes 37 but had two passes fall incomplete in the closing seconds.

Friday’s game was the third meeting between the two teams in the past two seasons.

They split two games last year, with Silverton winning 17-14 at West in the final game of the regular season to share the Mid-Willamette title. Two weeks later, West won 20-16 at Silverton in a state quarterfinal game.

Next up for both teams is a home game in the first round of the OSAA 5A state playoffs. Opponents were likely determined overnight Friday.

The West defense forced a turnover on downs at the Bulldogs 23 on the game’s first possession. The offense went down the field and scored on a 4-yard touchdown pass, a fade to the back corner of the end zone from Van Dyke to Connor Wolfe.

Silverton responded with its own score, an 8-yard Roth run to cap an 11-yard drive. West then turned the ball over on downs at the Silverton 47. The Bulldogs defense forced a quick punt before the offense went 81 yards in 10 plays and led at halftime on Phillips’ straight-ahead 1-yarder off a direct snap.

On the drive, Wolfe outjumped two defenders for a 33-yard catch and Caeden Zamora had a 23-yard reception to the Foxes 6.

Wolfe finished with four catches for 85 yards. Van Dyke was 9-of-14 passing for 136 yards and one score.

Silverton’s Roth and Nathan Kuenzi each rushed for 103 yards, on 16 and 17 carries, respectively. The Bulldogs held Foxes standout receiver Grant Buchheit to two receptions. McCarty was 7-of-13 passing for 96 yards.

Prep football: West receives No. 3 seed to 5A playoffs

Mid-Willamette Conference champion West Albany, which held off Silverton 28-21 on Friday night to finish 9-0, is the No. 3 seed to the OSAA 5A…

West Albany senior Porter Phillips has been named to the 5A football all-state first team at two different positions.

West Albany's Porter Phillips breaks away from the Silverton defense in the first quarter. Phillips rushed for 228 yards and two scores in a 28-21 win. The Bulldogs won the Mid-Willamette Conference title with the victory.

West Albany's TJ Zimmermann holds up a football after recovering a Silverton fumble late in the second quarter during the Bulldogs' win.