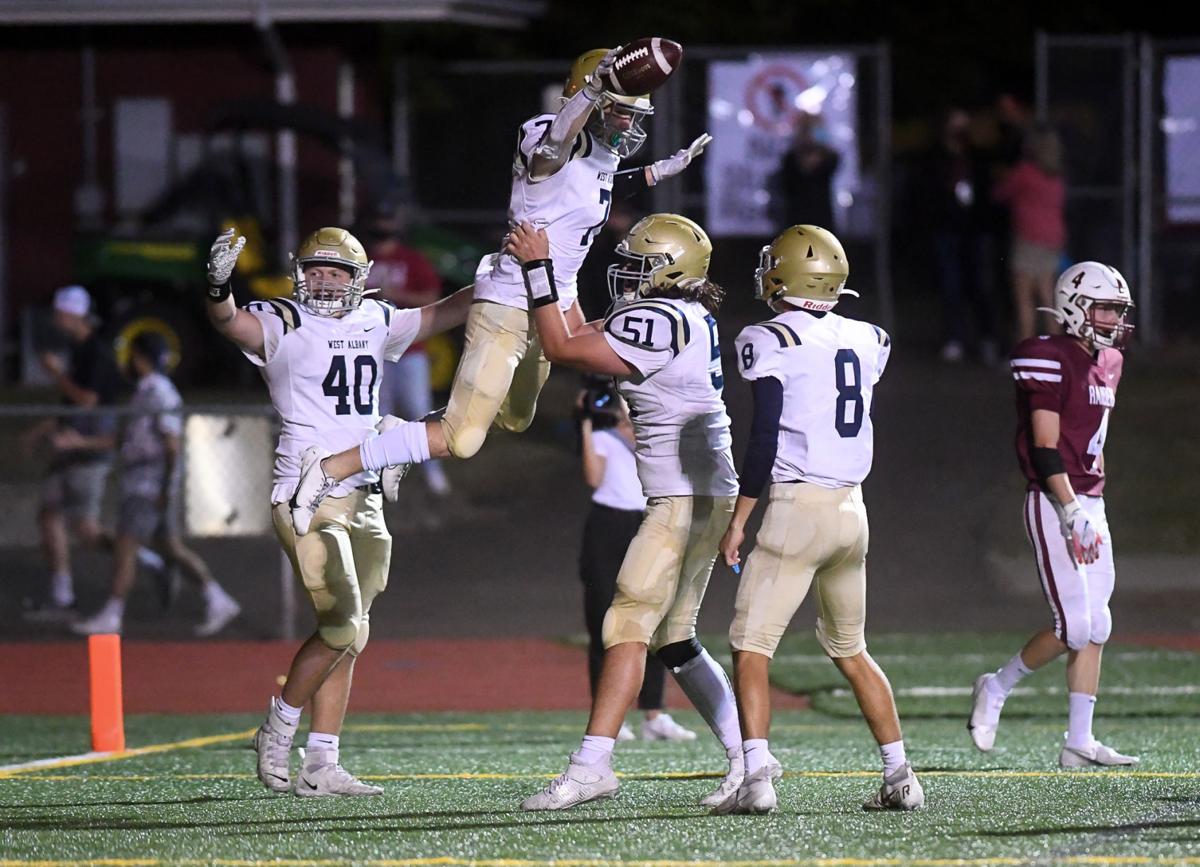 West Albany's Riley Paxton (7) celebrates with teammates after scoring one of his two first-half touchdowns in the Bulldogs' 42-20 win at Crescent Valley on Friday. 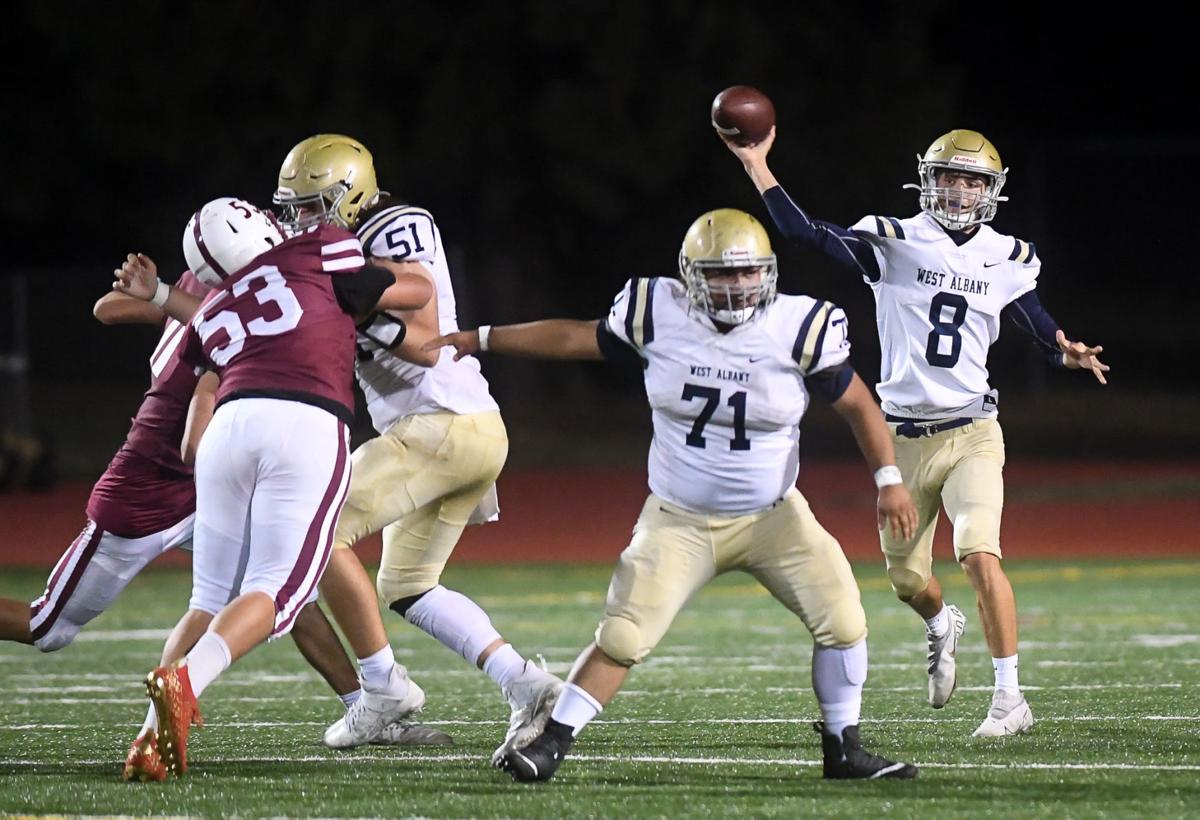 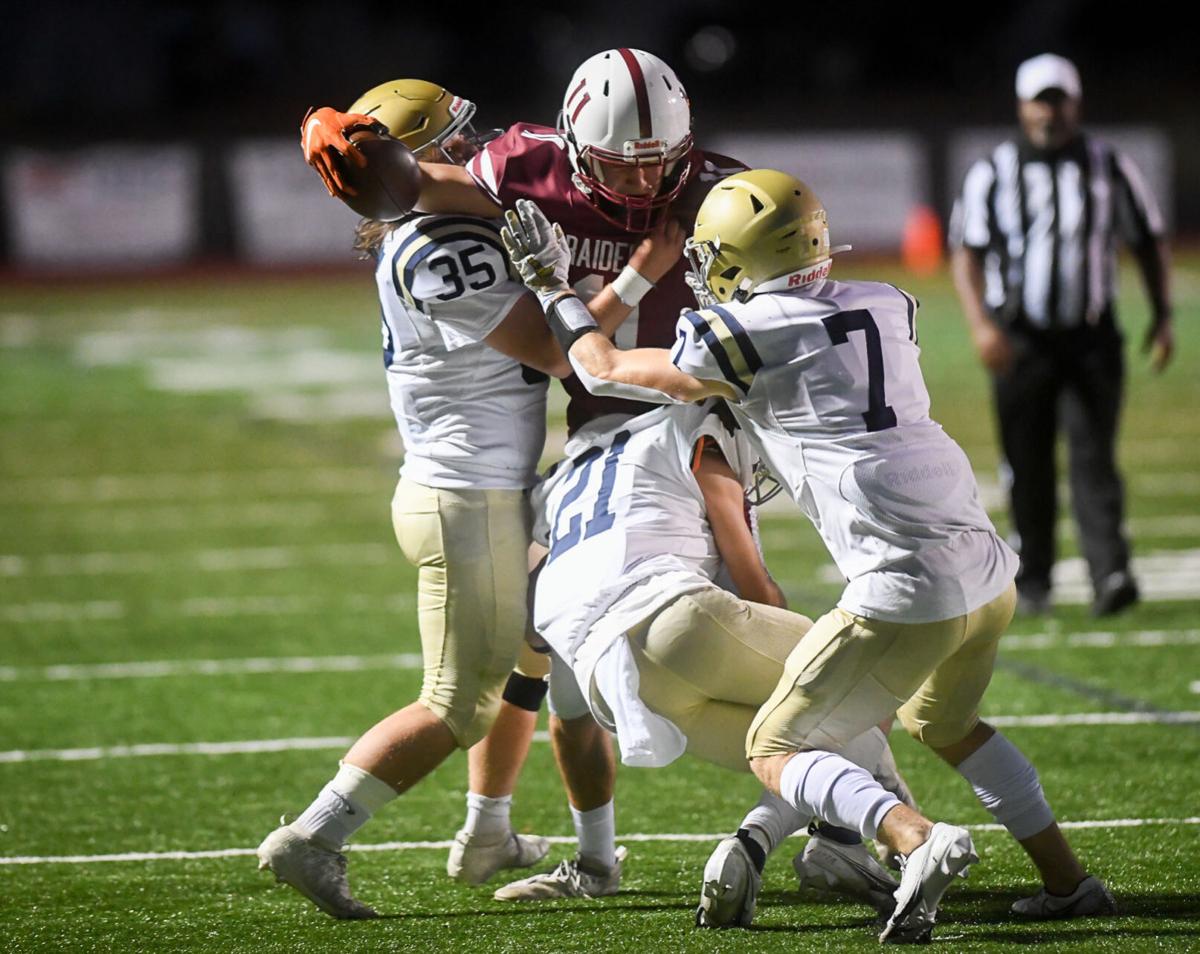 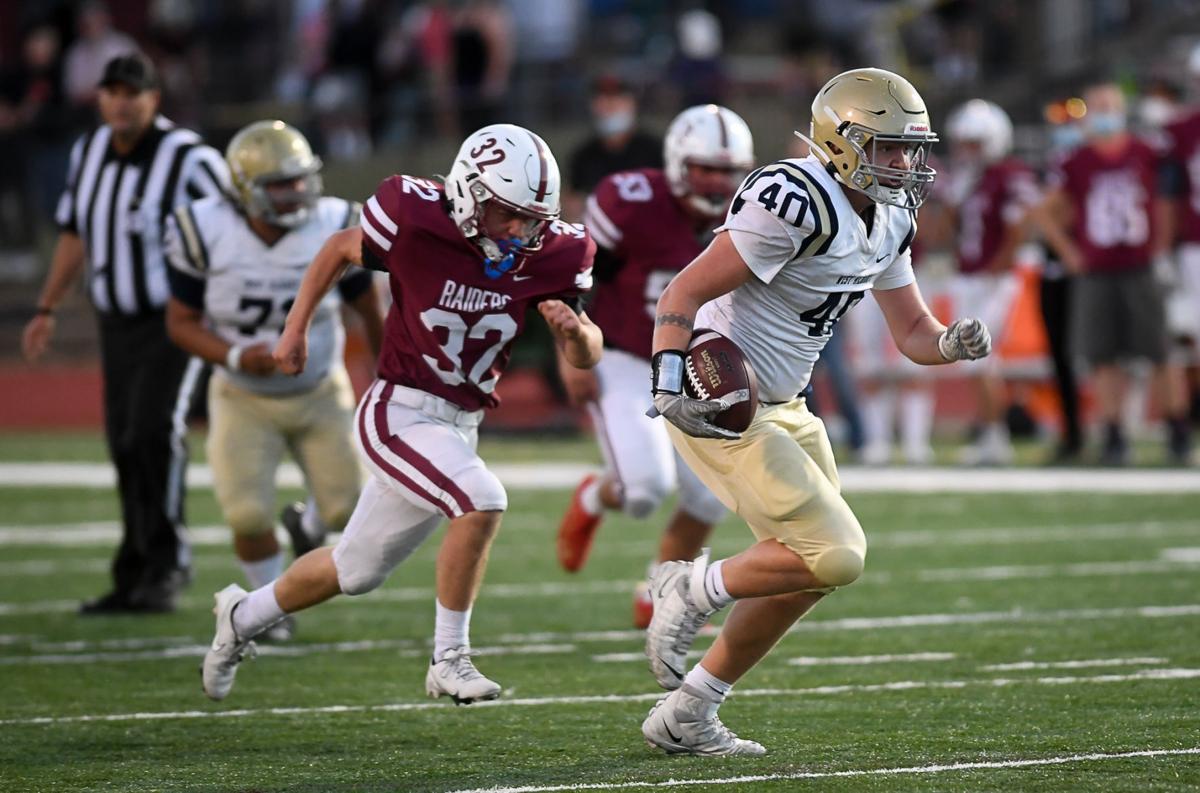 West's Brysen Kachel scored a touchdown in the first half. He had four catches for 68 yards. 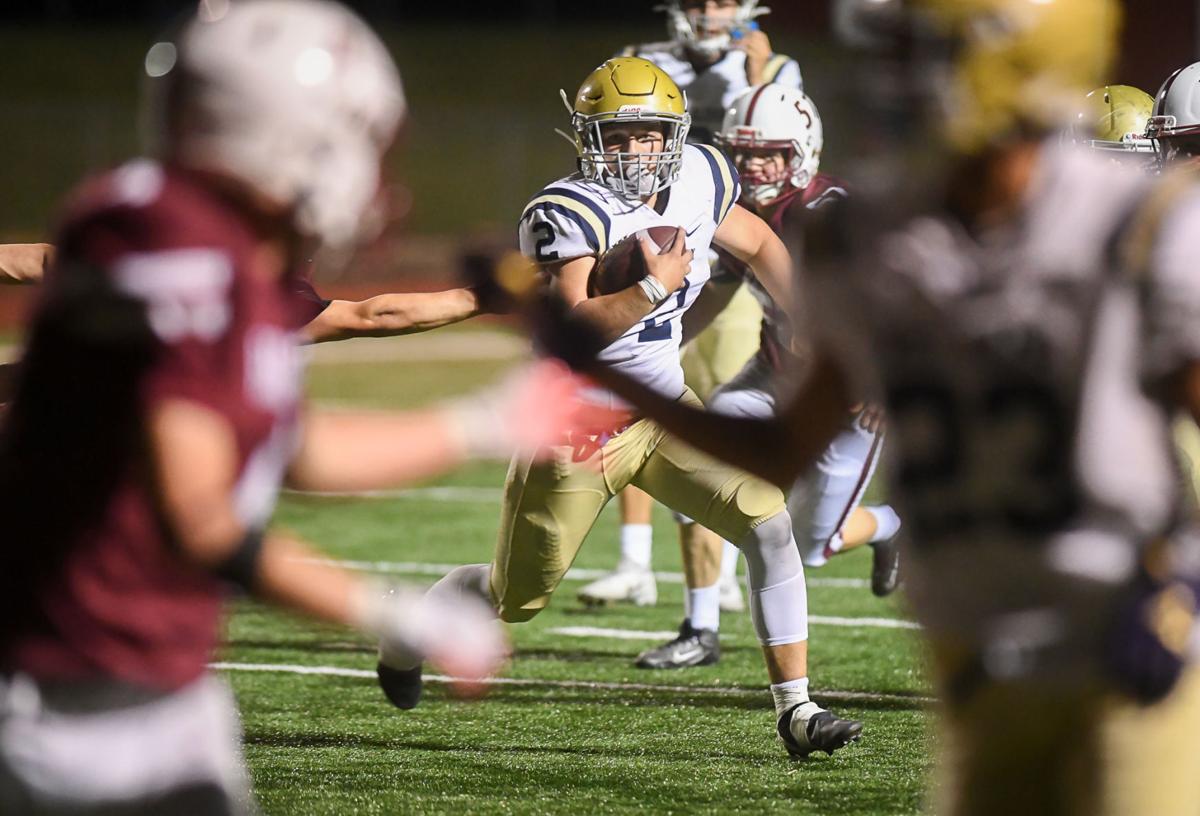 West Albany running back Anthony Vestal led his team's rushing attack with 129 yards and a touchdown on 19 carries.

West Albany High passed another test Friday night, showing off a balanced offense even without its top running back available for a second straight game.

Michael Cale passed for 248 yards and four touchdowns, while underclassmen Anthony Vestal and Tyler Hart-McNally combined for 200 yards and a score on the ground as the second-ranked Bulldogs eventually pulled away for a 42-20 win at Crescent Valley in a Mid-Willamette Conference football game.

After getting a defensive stop on the opening possession after halftime, West grinded out 48 yards in 10 plays, and Cale capped the drive with a 2-yard touchdown plunge to put the visitors up two scores. Hart-McNally, a freshman, had a 21-yard run to set up the touchdown.

But CV came right back driving 80 yards for its own score.

The Raiders converted a fourth down on a 7-yard pass from Rocco McClave to Landen Parker and later a third down on Jake Leibelt’s 31-yard catch to the Bulldog 33.

Two plays later, Ty Abernathy (who is also running cross-country this fall), made a diving catch of a 23-yard McClave pass for a touchdown. Parker caught the two-point conversion to cut it to a 14-point deficit.

But West would quickly get back in control and keep CV at arm’s length the rest of the way.

Vestal, a sophomore, ran 26 yards on first down and carried twice more before Brysen Kachel hauled in a 12-yard pass to move the ball to the Raiders 12. Two plays later, DeMarcus Houston grabbed a Cale pass and found the end zone from 36 yards out.

After West’s Donavyn Weddle intercepted McClave on the next drive, Vestal carried three times and scored on a 10-yard run to make it 42-14 with 8:07 left.

CV’s Brayden Thibert finished the scoring with a 9-yard touchdown run in the closing minutes.

“We’ve been learning how to compete, and that’s the level we have to compete at,” said CV coach Andrew McClave, who took over his program during the summer. “No excuses, that’s a good football team. We’re thin and I have a lot of guys going both ways. We made plays and they made plays, too. That was a good football game.”

The home team had minus-7 rushing yards at halftime and wasn’t able to get much going on the ground until late in the contest.

“We have a good quarterback and very good skill guys and we play to our strengths,” coach McClave said.

Cale showed he has no shortage of weapons as four receivers had at least four catches each. Houston had four receptions for 79 yards, Kachel four for 68, six for 3 and Brock Nelson five for 46.

Paxton had two first-half touchdown catches and Kachel another.

“It’s great, because Mike can just pass to anyone,” said Kachel, a sophomore tight end. “Everyone’s making plays and the line gets it done for us.”

Added Cale: “Our wide receivers made a number of insane catches and our O-line did so good against CV’s D-line. It just started working and our receivers were running great routes on CV’s defense and it all worked out. Our whole offense is super versatile and everybody does a good job of doing what they need to do.”

Vestal, who has helped fill the void after Marcus Allen went down with a leg injury in week 2 at Canby, had 129 yards and a touchdown on 19 carries. Hart-McNally had 71 yards on 10 attempts.

The schedule doesn’t get any easier for CV as next week the Raiders go to No. 4 Silverton before playing at No. 8 Dallas. West Albany plays at Central next Friday.

West head coach Brian Mehl didn’t attend Friday’s game because he was quarantining. He was feeling well, Pouliot said, and is expected back next week.

Once asked about an opponent’s style in an upcoming fight, former boxer Mike Tyson said, “everybody has a plan until they get punched in the mouth.”

Here is a look at the high school football games in our coverage areas this weekend.

West Albany's Riley Paxton (7) celebrates with teammates after scoring one of his two first-half touchdowns in the Bulldogs' 42-20 win at Crescent Valley on Friday.

West's Brysen Kachel scored a touchdown in the first half. He had four catches for 68 yards.

West Albany running back Anthony Vestal led his team's rushing attack with 129 yards and a touchdown on 19 carries.