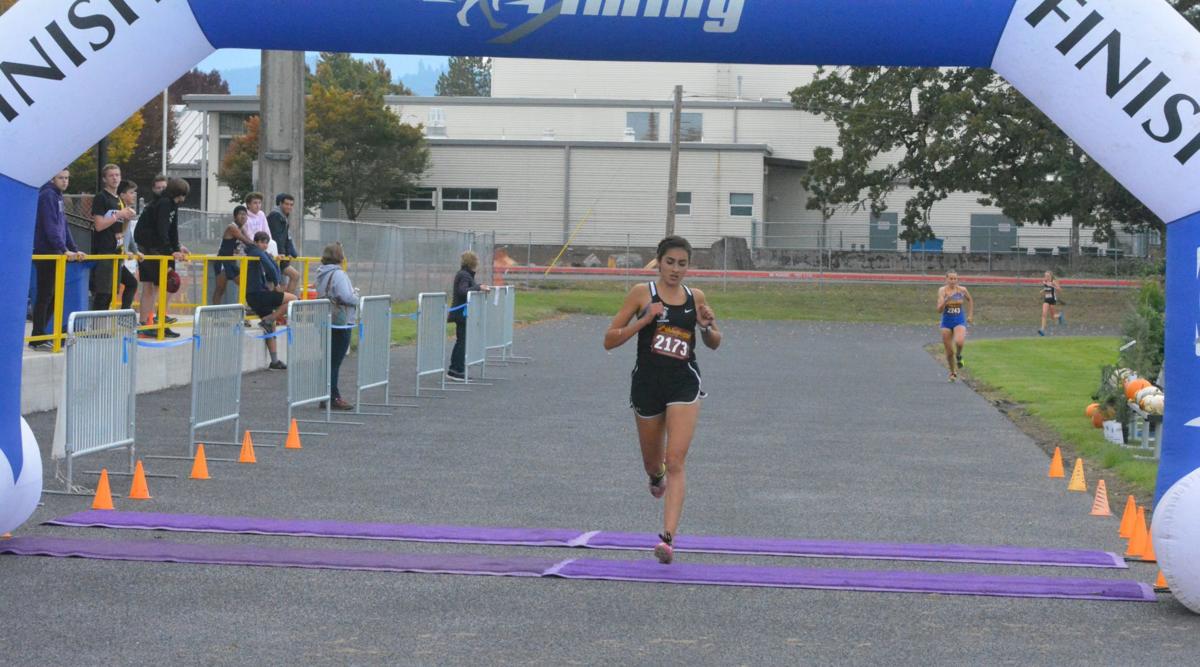 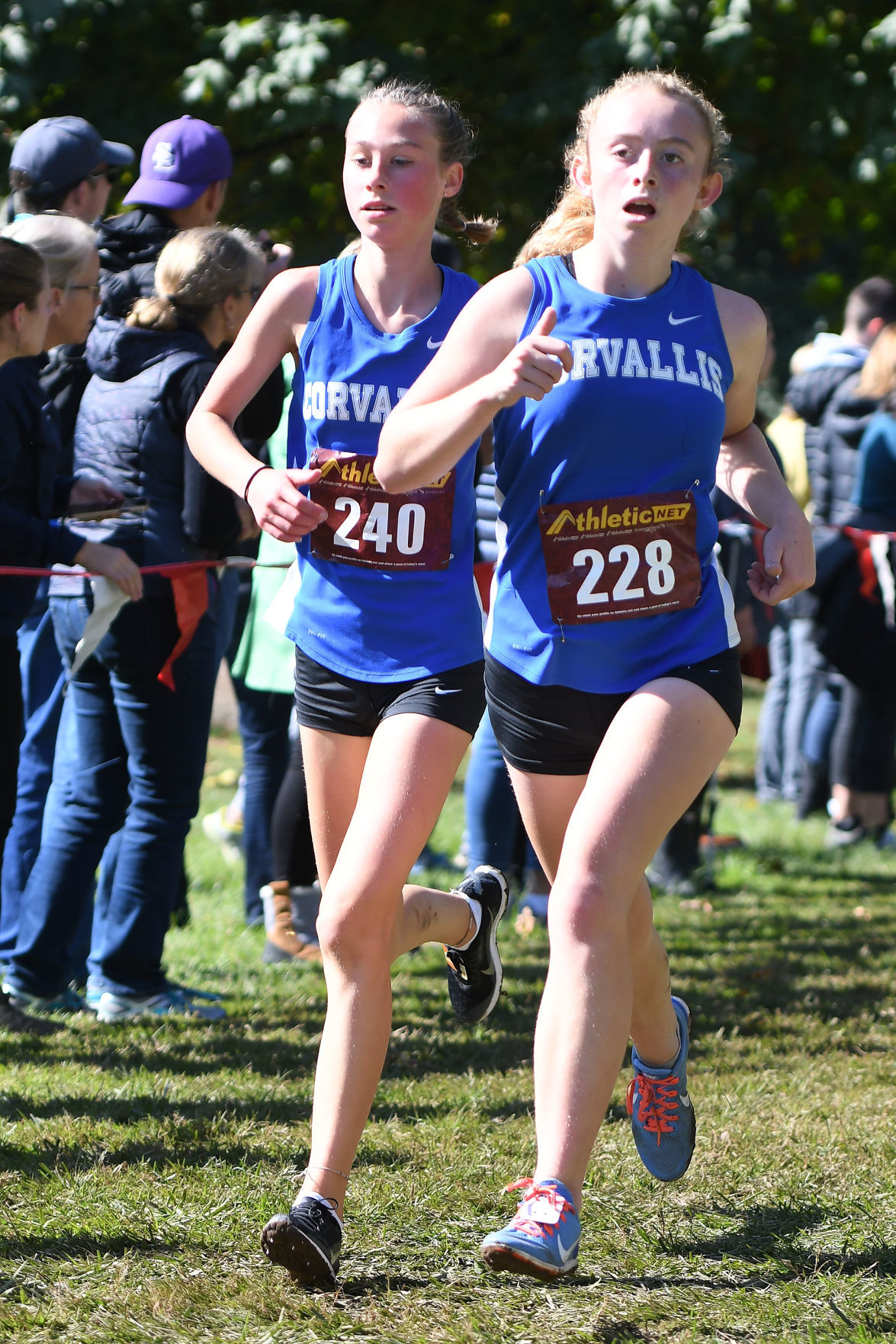 Corvallis' Ava Betts, right and Avery Nason could help lead the Spartans to a 5A state cross country title on Saturday at Lane Community College.

The state cross-country meets for all classifications take place at Lane Community College on Saturday. Here’s a look at the area teams competing.

Scio: Freshman standout Athena Lau just missed a personal-best while finishing second at district meet to qualify for state as an individual. She enters the weekend with a personal record of 20:41.70, good for the 22nd-fastest among small-school runners this year.

Santiam Christian: Santiam Christian finished as runner-up at its district championship meet and is a very young group; three of the Eagles’ top four runners are freshmen. Benjamin Bourne, a freshman who enters the state meet with a personal-best of 17:01, is SC’s top runners and the 12th-fastest in 3A this year. Austin Bradford (18:16.50), Colin Longballa (18:23.70), Zavi Crisostomo (19:45.90), Caiden Hohensee (20:50.10) and Shiloh Gallagher (22:23.20) will also race for the Eagles.

Philomath: The Warriors will be very much in the mix for a state title, with Sisters, Marist Catholic and Siuslaw figuring to serve as their strongest competition. Philomath finished four points back of Sisters at the Oregon West district meet last week and could be in for another tight race with the Outlaws on Saturday. Only 14 runners entered in the 4A state meet have run a faster time than Warriors’ freshman Brody Bushnell (16:36.80) this season, and the Warriors have a trio of other runners who have cracked the sub-17 minute mark this fall. Grant Hellesto (16:42.20), Brody Gerig (16:42.70) and Justin Enghauser all delivered top-10 finishes at districts. Sean Cummings (17:05.60), Levi Knutson (17:06.20) and Noah King (17:19.00) round out the Philomath lineup.

Corvallis: The Spartans could find themselves in a very close race for the team title after finishing sixth last season. Corvallis boasts a squad loaded with talented underclassmen — the Spartans’ top-six runners are either freshmen or sophomores — and edged North Salem for the Mid-Willamette Conference district title by one point last weekend. North Salem and Hood River Valley will likely be the two teams battling the Spartans for the state crown. Sophomore Madeline Nason finished third at state last year and owns the third-fastest time in 5A this year. Behind her are a trio of freshmen in Ava Betts (18:55.20), Avery Nason (19:02.50) and Ronja Soares (19:08.10) who enter the weekend with season-best times inside the top 12 of 5A. Vivienne McFarland Price (20:13.70), Kaia Anspacher (20:15.60) and Olivia Dever (20:32.85) fill out Corvallis’s squad.

Crescent Valley: The Raiders finished fifth at state last season and will have a strong chance to finish in a similar position on Saturday. Led by junior standout Sunitha Black, who owns the fourth-fastest time in 5A this season, Crescent Valley has a strong core of experienced racers who finished third at a tough Mid-Willamette Conference district meet. The Raiders also feature senior Maggie Fisher, who owns the 22nd-fastest time in 5A but took fourth at the state meet last season and has been coming into form as of late. Black (18:21.84) and Fisher (19:34.60) will pace CV, which also features Gwen Gray (19:51.94), Ava McKee (20:17.86), Angela Martin (20:19.82), Kaiya Leamy (20:23.80) and Lilly Gordon (21:05.76).

Crescent Valley: In almost any other season, the Raiders would be among the favorites to capture the state title. But Saturday’s meet will feature an Ashland squad that is among the fastest teams in the nation. Thus, CV will likely be in a battle with Hood River Valley and Crater for second place, and the Raiders are finding their groove at the right time. Now fully healthy, CV is led by sophomore Blake Byer, who covered the district course in 15:36.90 last weekend, good for the fifth-fastest time in 5A. His twin brother, Cade Byer, has fully recovered from an injury that sidelined him early in the season and he ran a personal best of 16:27.80 at districts. Logan Pawlowski (16:20.00), Reid Kerr (16:35.01), Jasper Pollock (16:54.25), Seb Daniels (16:59.84) and Riley Callahan (17:28.78) will all race for the Raiders on Saturday.

SALEM — Chance Lamer scored a takedown against Kadin Kuenzi late in the second round of a match between reigning state champions.

Crescent Valley had 16 athletes, including all 10 of its top seeds, advance to the semifinals at the 5A Special District 3 wrestling tournamen…

Crescent Valley is a heavy favorite to repeat as the 5A wrestling state team champion.

Bouncing back from an uncharacteristic performance, Lebanon took control Tuesday night and never gave it back.

There is still plenty at stake in Mid-Willamette Conference girls basketball with just over a week to go in the regular season.

Prep wrestling: Oregon sees an influx of girls competing in the sport

Two decades ago, the idea of a girls-only dual wrestling meet seemed impossible to Casey Horn.

West Albany High continued to get into its playoff groove Tuesday, taking control of the game early and never giving it back.

Corvallis' Ava Betts, right and Avery Nason could help lead the Spartans to a 5A state cross country title on Saturday at Lane Community College.