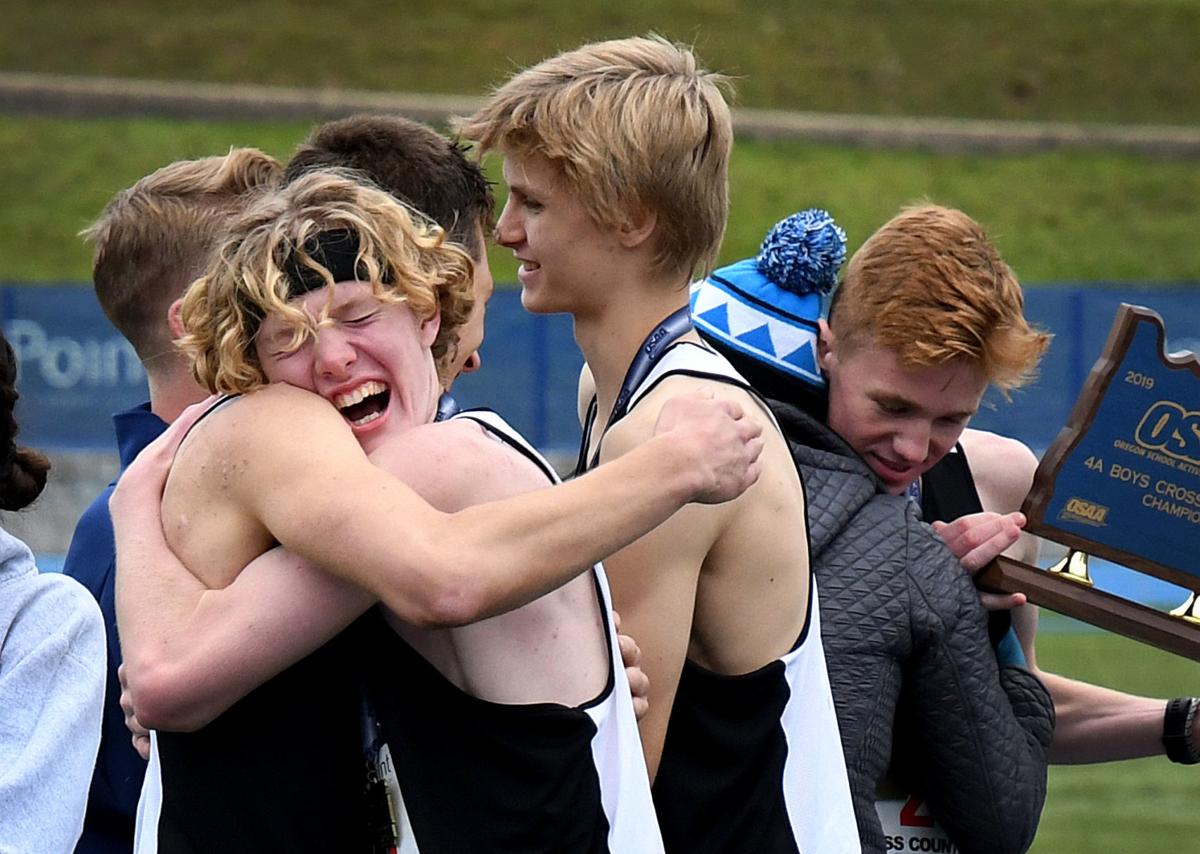 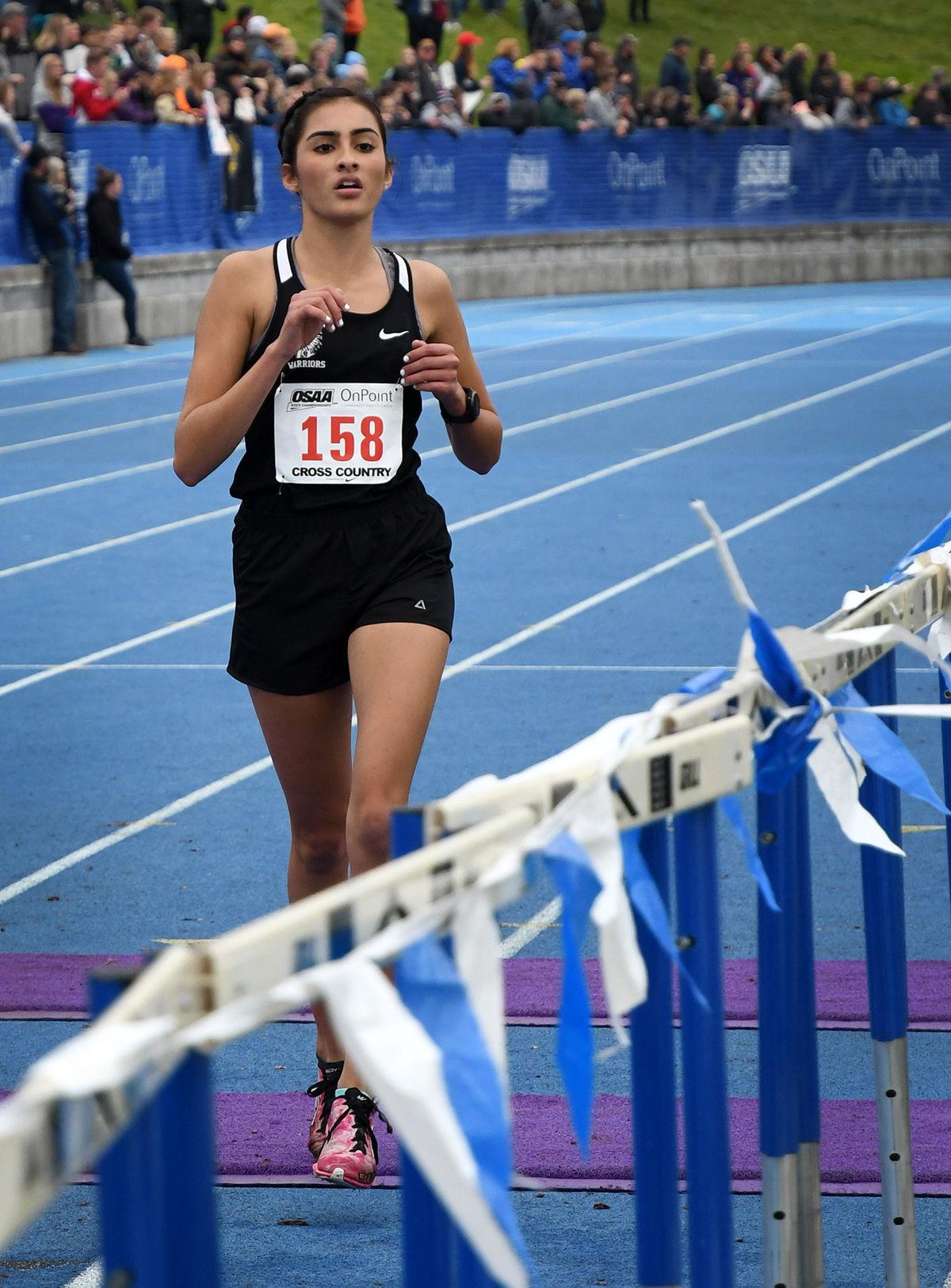 Philomath’s Hannah Hernandez finished eighth in the 4A girls race.

Fulton knew it was going to be nearly impossible to hang with Sisters’ top runners as the Outlaws feature the two fastest runners in 4A in John Peckham and Will Thorsett. But Fulton figured if Philomath could finish with a large pack of runners in front of Sisters’ third and fourth-fastest runners, they would have a strong chance to win.

The Warriors executed that plan to perfection Saturday at Lane Community College and delivered a gutsy performance to capture the 4A state title. Philomath scored 65 points, just five better than the Outlaws, to win their first boys title since 2010.

“I couldn’t be more proud of them,” Fulton said. “Because they really like each other and all week long they were focused and pumped up and really believed they could do this. They came in and ran exactly to plan.”

The Warriors were led by freshman Brody Bushnell, who finished ninth in 16:20.20, good for a 16-second personal best. Bushnell clung tight with the Warriors’ pack for the majority of the race, and with half a mile to go, he and three other Philomath runners occupied the 19-22 positions, with Sisters’ third and fourth runners just in front of them.

But as he approached the final 400-meter stretch, he heard something that caused him to separate from the pack.

“I could hear the Sisters coach tell their runners, ‘We have a two-point lead!’” Bushnell said. “I wanted to try to beat them, so I just tried to pass as many guys as I could. I knew I had to make the move.”

Bushnell moved up 10 spots from that point. Brody Gerig (15th place, 16:24.00), Grant Hellesto (16th, 16:24.10) and Justin Enghauser (18th, 16:27.30) all followed suit and surged ahead as well. Enghauser out-kicked Sisters’ Ethan Hosang at the finish line, meaning all of the Warriors’ top-four runners finished ahead of the Outlaws third-place finisher.

The win was especially significant for Gerig, who missed the early portion of the season while recovering from a stress fracture. One of just two seniors in Philomath’s varsity lineup along with King, Gerig went through a tedious rehab process that left him playing catch-up until a few weeks ago.

“We said we were confident going into this and I think we really were,” Gerig said. “But with 800 (meters) to go, Sisters were right there and it was tough... We were so close and I was just like, ‘There’s nothing to lose. Let’s do this.’”

In the 4A girls race, the Warriors placed third as a team. Senior Hannah Hernandez led Philomath with an eighth-place finish as the Warriors scored 112 points to edge out fourth-place Tillamook (116). Marist Catholic won the race with 50 points.

At the district meet, Hernandez finished comfortably ahead of Sisters freshman Ella Thorsett to capture the league Oregon West Conference title. But this time around, Thorsett and Junction City junior Anika Thompson took off at a blistering pace and soon separated from the rest of the field.

“My strategy for the first mile was to hit my pace, which I did,” Hernandez said. “And then on the second mile, I tried to close that gap between the front two. That second mile was just really hard, harder than it usually feels. At that point, I was just like, ‘You have to get into the top 10 now.’ From there, I just didn’t let anybody else pass me.”

Santiam Christian finished sixth as a team and were led by a 13th-place finish by freshman Benjamin Bourne, who covered the course in 17:06.50.

Brandon Williams of East Linn Christian Academy finished seventh in 16:28.10 to lead an eighth-place team finish for the Eagles. It was a six-spot improvement for Williams from last year’s state meet.

Philomath’s Hannah Hernandez finished eighth in the 4A girls race.