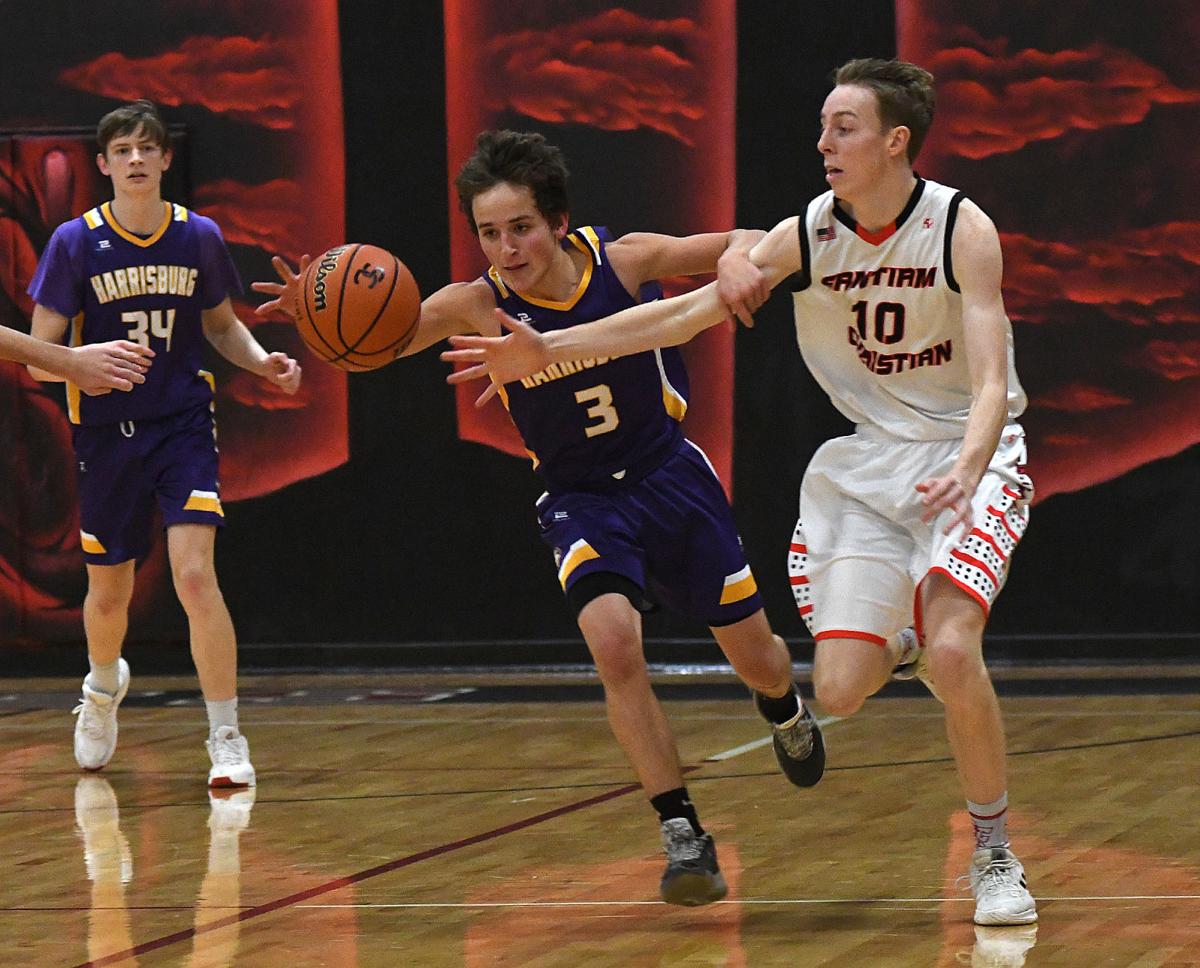 Harrisburg's Tyler Baker steals a ball from Santiam Christian's Levi Villers in the second half of Harrisburg's 52-41 victory over SC. Baker had seven points. 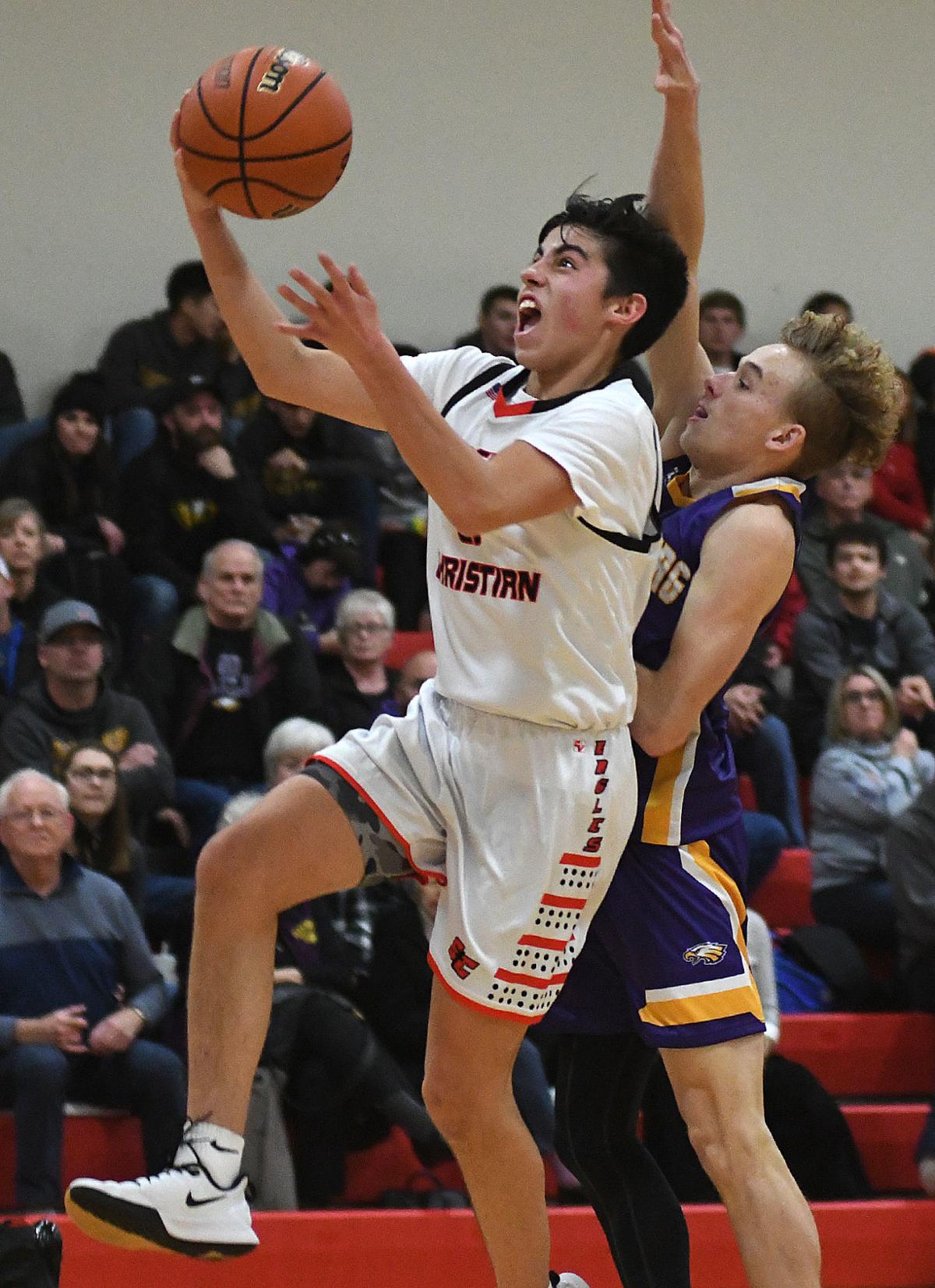 Santiam Christian''s Ben Galceran shoots in front of Harrisburg's Chase Gallegos. Galceran had a game-high 22 in the loss.

A varsity program that won three games each of the past two seasons has some momentum to carry forward after a big win.

Behind 18 points from Tyler Thompson and 13 from Jack Meadows, the Eagles jumped ahead of No. 4 Santiam Christian early Tuesday night and never trailed to get a 52-41 road win in the Mountain Valley Conference opener for both teams.

“A little rough around the edges, but we’re getting better all the time,” said Crabb, who spent the past seven years coaching his two children in youth sports after a six-year stretch leading Harrisburg. “We wanted to compete tonight. That was our goal, come in and compete.”

Harrisburg did that in the battle of two Eagles squads.

SC’s Joe MaQatish and Koby Williamson, the two tallest players on the floor, were held to a combined 11 points.

“Their aggressiveness worked out for them over us,” Santiam Christian coach Dennis McLain said. “They were aggressive and we were more timid and didn’t attack. Got a little out of sorts and had some open shots and hit front rim on them.”

Despite two Galceran 3-pointers, Santiam Christian was able to chip just one off its six-point halftime deficit in the third quarter.

Back-to-back 3-pointers by Risinger and Galceran in the fourth cut what had been a 12-point, first-half deficit to two at 40-38. Harrisburg (9-5) came back with seven straight points, on Wyatt Perry’s conventional three-point play and four Thompson free throws.

Another Galceran 3 with 55 seconds remaining, cutting it to 47-41, gave the host Eagles some hope. But Harrisburg connected at the foul line, making 10 of its final 11 shots from there to seal the win.

“This makes it look different,” Meadows said of his team’s season. “I don’t think anybody expected us to beat SC. It definitely makes our heads go up a lot more and a little more excited.”

Harrisburg was trying to forget about a 59-26 loss to Knappa three days earlier at the Toledo tournament. Despite poor shooting throughout, the Eagles trailed by nine at halftime before seeing it all fall apart. Eleven games in December left Crabb’s team without much practice time.

“They decided they wanted to play better,” Crabb said of this year’s turnaround for his team, which includes seven returning players. “They’re buying in to what we’re trying to do. It’s taken a long time to get them to understand what hard work looks like.”

Crabb, who won a 1A state title with Christ’s Center School of Junction City in 1998, won his 335th game Tuesday in a high school career that’s included stops at four different Oregon schools. Former Harrisburg star Jordan Buhler, most recently the Eagles’ coach, has stayed on as an assistant.

Harrisburg’s 19-11 lead after one quarter was fueled by four of the team’s five 3-pointers in the game. The visitors took they biggest lead at 26-14 on a Thompson 3-pointer with 6:53 left in the first half.

Two Galceran 3s in the last two minutes of the half put the pressure on Harrisburg, but Thompson answered with a layin to put Harrisburg up 33-28 at halftime.

Santiam Christian has dealt with adversity the past two years as season-ending injuries have led to the feeling of starting all over.

Last year, Zach Baugher, now a college freshman playing at Western Oregon University, took a hard fall in a late-December game and suffered head and arm injuries. SC went on to finish 25-4 and fourth at state.

This season, Josh Baugher, a junior wing and the team’s top player, tore a knee ligament in the first quarter of the Eagles’ first game and was lost for the season.

Harrisburg's Tyler Baker steals a ball from Santiam Christian's Levi Villers in the second half of Harrisburg's 52-41 victory over SC. Baker had seven points.

Santiam Christian''s Ben Galceran shoots in front of Harrisburg's Chase Gallegos. Galceran had a game-high 22 in the loss.