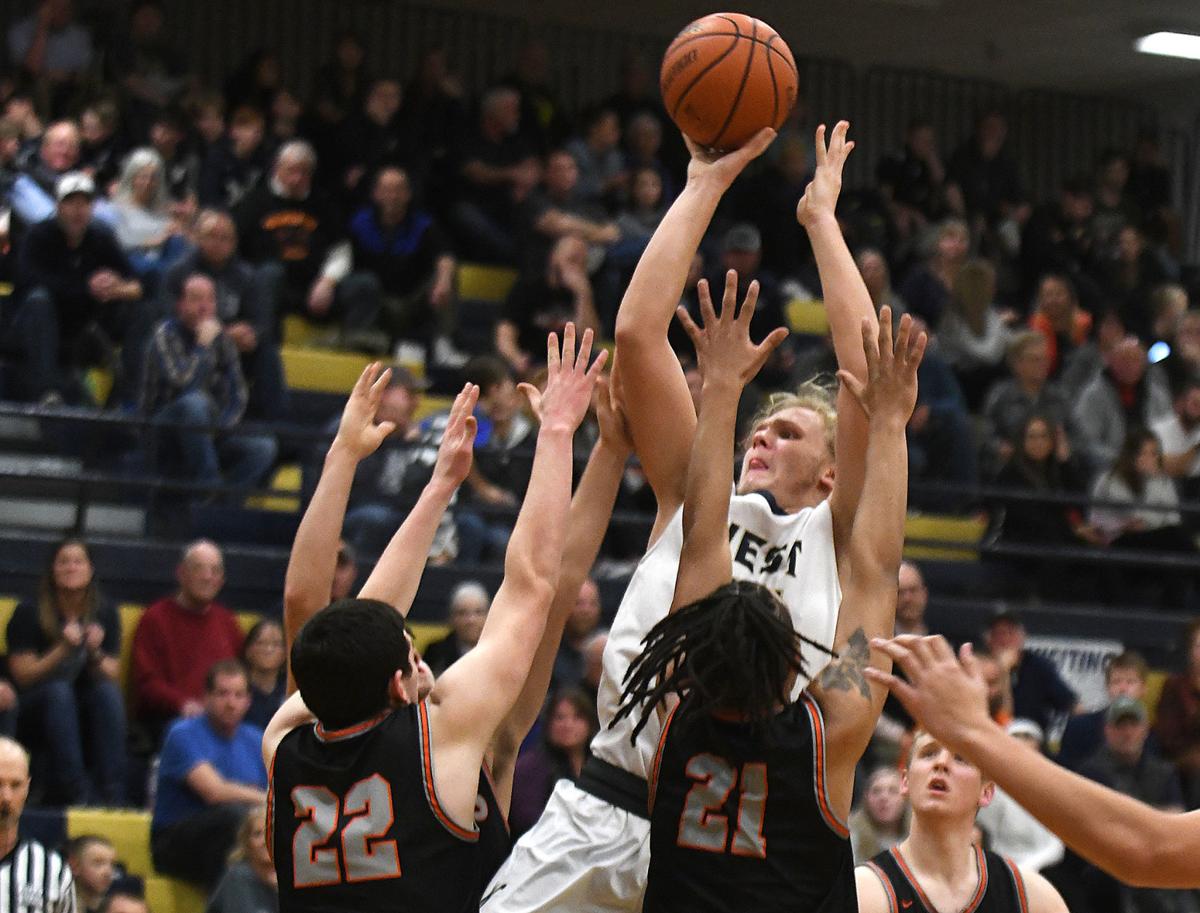 West Albany's TJ Zimmermann shoots over a Silverton triple team. Zimmerman led the Bulldogs with 20 points in the 61-50 loss. 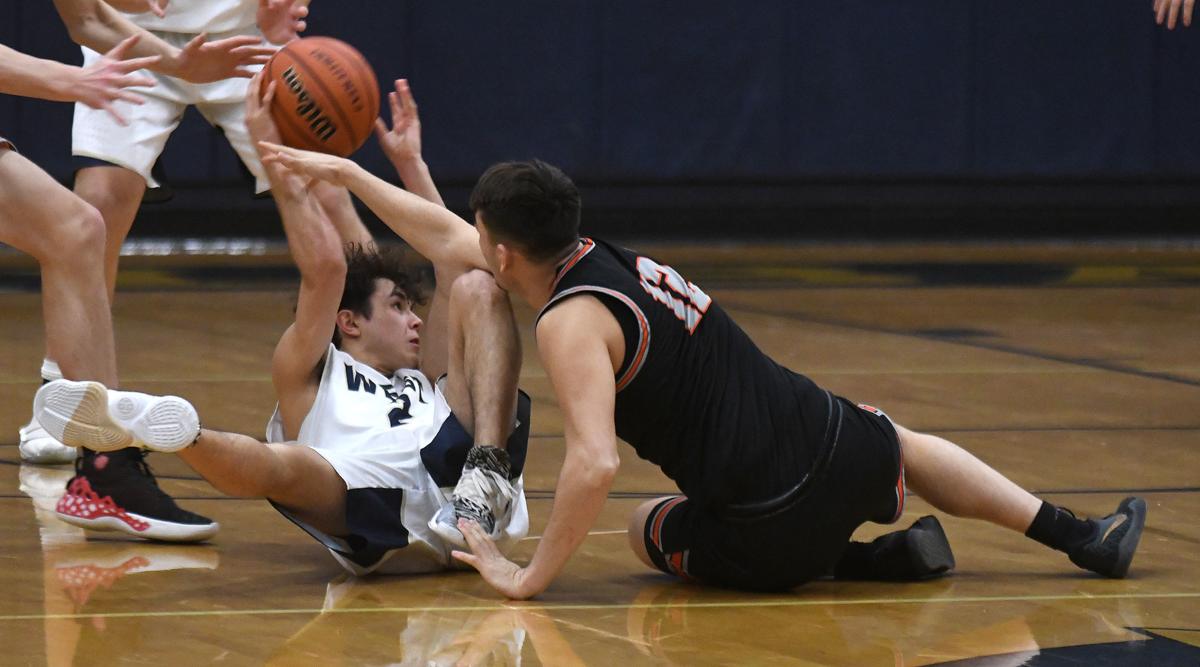 West Albany's Koby Ruiz passes after recovering a ball in front of Silverton's David Gonzales. Ruiz suffered an ankle injury late in the first half and could not return. 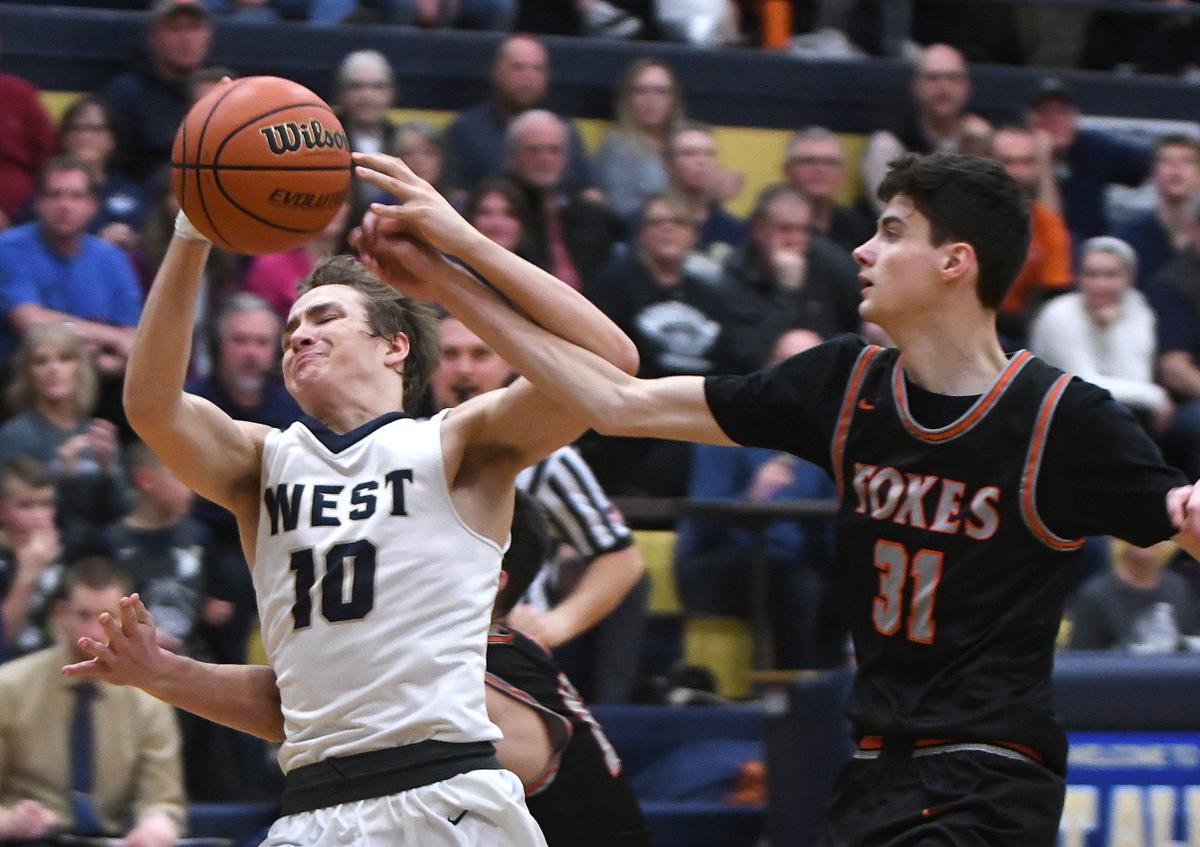 The second-ranked Foxes put relentless pressure on the No. 6 Bulldogs at both ends, and it was just a little more than the home team could handle.

Especially without one of its best players in point guard Koby Ruiz, who suffered an ankle injury in the final minute of the first half and didn’t return.

Silverton took control with a late first-half run and never let up, pulling away in the third quarter then holding on for a 60-51 road win in Mid-Willamette Conference boys basketball.

“They’re a good team. They do a good job. They get up in you defensively,” said West junior post TJ Zimmermann. “They’re really good at having good ball pressure and they were doubling me and tripling and still doing a pretty good job if I kick it out and recovering.”

Luke Killinger, who went to the bench with 2:23 remaining with a knee injury, added 16 points and Justin Henderson seven for West, which now goes on the road for five straight conference games.

David Gonzales had 17 points and Trysten Wertz 14 for Silverton. Wertz had four of the Foxes’ nine 3-pointers.

“They’re all long and athletic, so they can pressure you up top, then down low they’ve got some size that can match us,” West coach Derek Duman said. “They were doubling and tripling, they were really physical down low and the officials let it be a physical game. They didn’t call it one way or the other. It was just a physical game.”

Killinger and Zimmermann scored early in the third quarter to cut a five-point halftime hole to one. Dunn answered with his first of three 3-pointers after the break.

A Zimmerman basket off a Henderson assist and a Killinger conventional three-point play had the Bulldogs back within one midway through the third. But the Foxes scores seven straight, including another Wertz 3, and led 43-36 going to the fourth.

The visitors never let West get closer than that. Silverton eventually led by 14.

The Bulldogs had confidence going into game after playing the Foxes tightly in a 54-50 road defeat to open conference play on Dec. 16.

“We’re close. I thought we did a good job of coming out and competing and not giving up. I think we’re right there,” Zimmermann said. “I don’t think we’ve played a full game of our basketball and we’re just keep going to practice and trying to get better.”

West started fast, jumping out to a 9-0 lead.

Austin Stanaway scored on a layin, Ruiz hit Henderson for another, Killinger hit a 3-pointer from the left wing and Zimmermann made a mid-range jumper.

Silverton came back with six straight before Zimmermann scored off an offensive rebound to put the Bulldogs ahead 11-6 after one quarter.

The Foxes used three second-quarter 3-pointers to close the gap and eventually take the lead.

Wertz and Gonzales each had a deep ball in the first 1:18 of the period. Killinger, Zimmermann and LJ Carmichael answered Silverton baskets to keep the home team ahead before Wertz’s third 3-pointer of the game tied it at 19-all. The Foxes then took the lead on a Gonzales layin with 3:27 in the half.

Silverton’s Owen Cote scored five straight points and Gonzales got another layup to help Silverton to a 28-23 halftime lead.

The loss of Ruiz with 54 seconds left in the half was a big one for the Bulldogs.

Duman said immediately after the game that the status of Ruiz and Killinger were uncertain.

West Albany's TJ Zimmermann shoots over a Silverton triple team. Zimmerman led the Bulldogs with 20 points in the 61-50 loss.

West Albany's Koby Ruiz passes after recovering a ball in front of Silverton's David Gonzales. Ruiz suffered an ankle injury late in the first half and could not return.