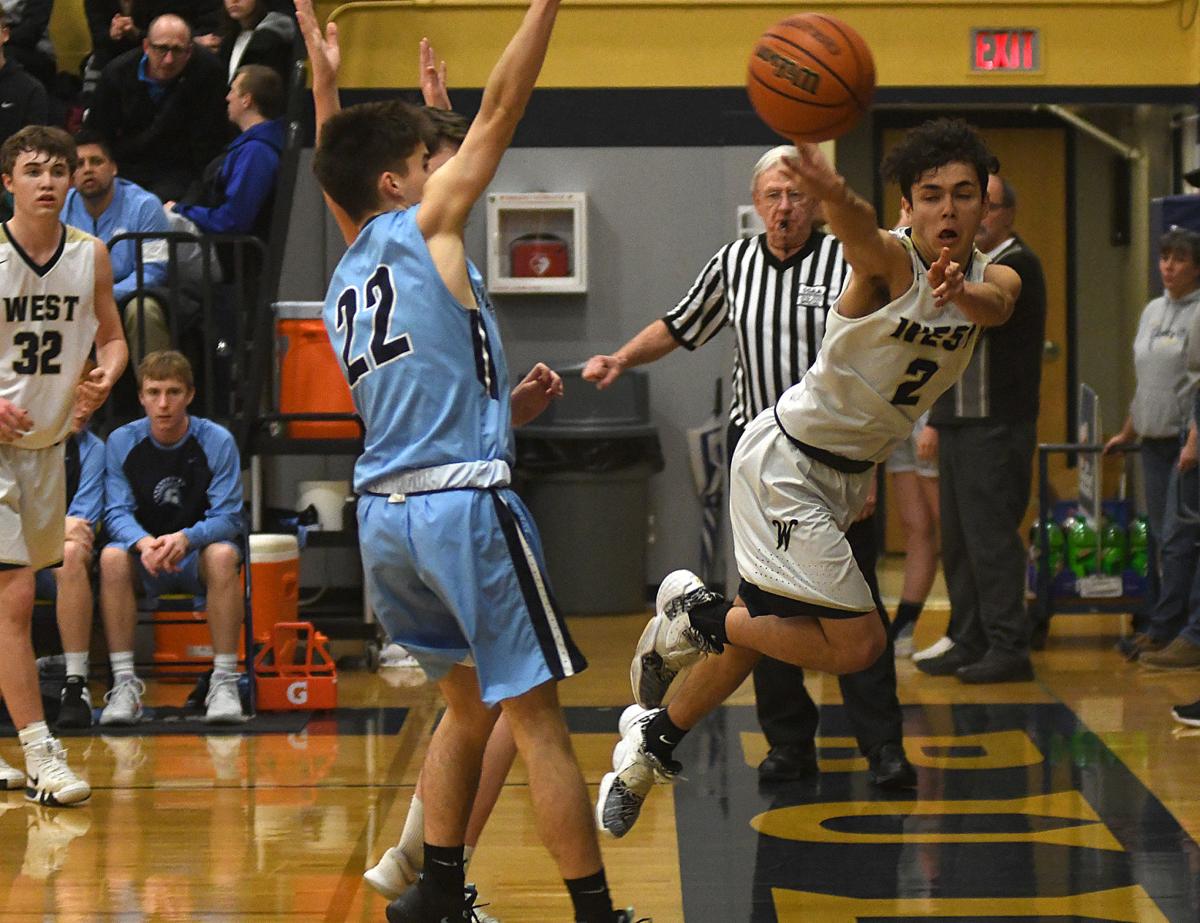 West Albany's Koby Ruiz passes around Corvallis' Curtis Kuhlman. Ruiz finished with 22 points to lead the Bulldogs to a 67-57 win against the Spartans. 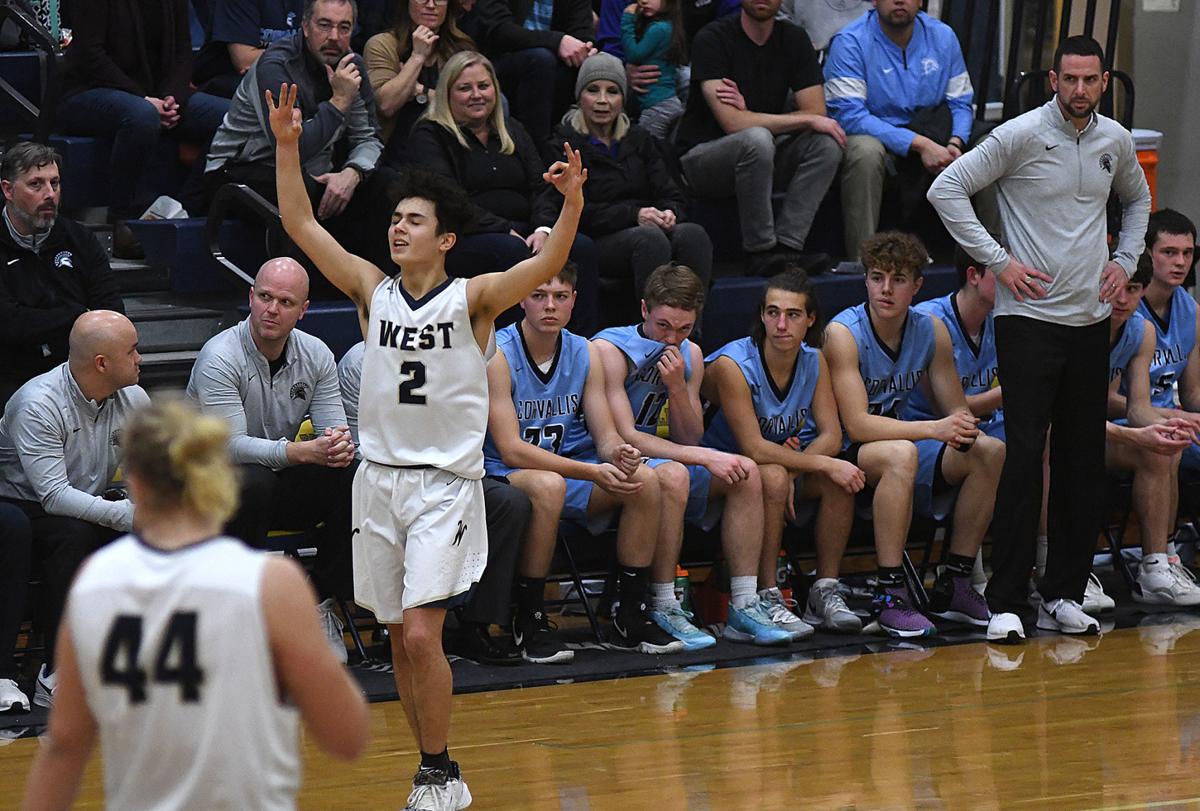 West Albany's Koby Ruiz celebrates a 3-pointer in front of the Corvallis bench. Ruiz scored 22 points to spark the Bulldogs to the win. 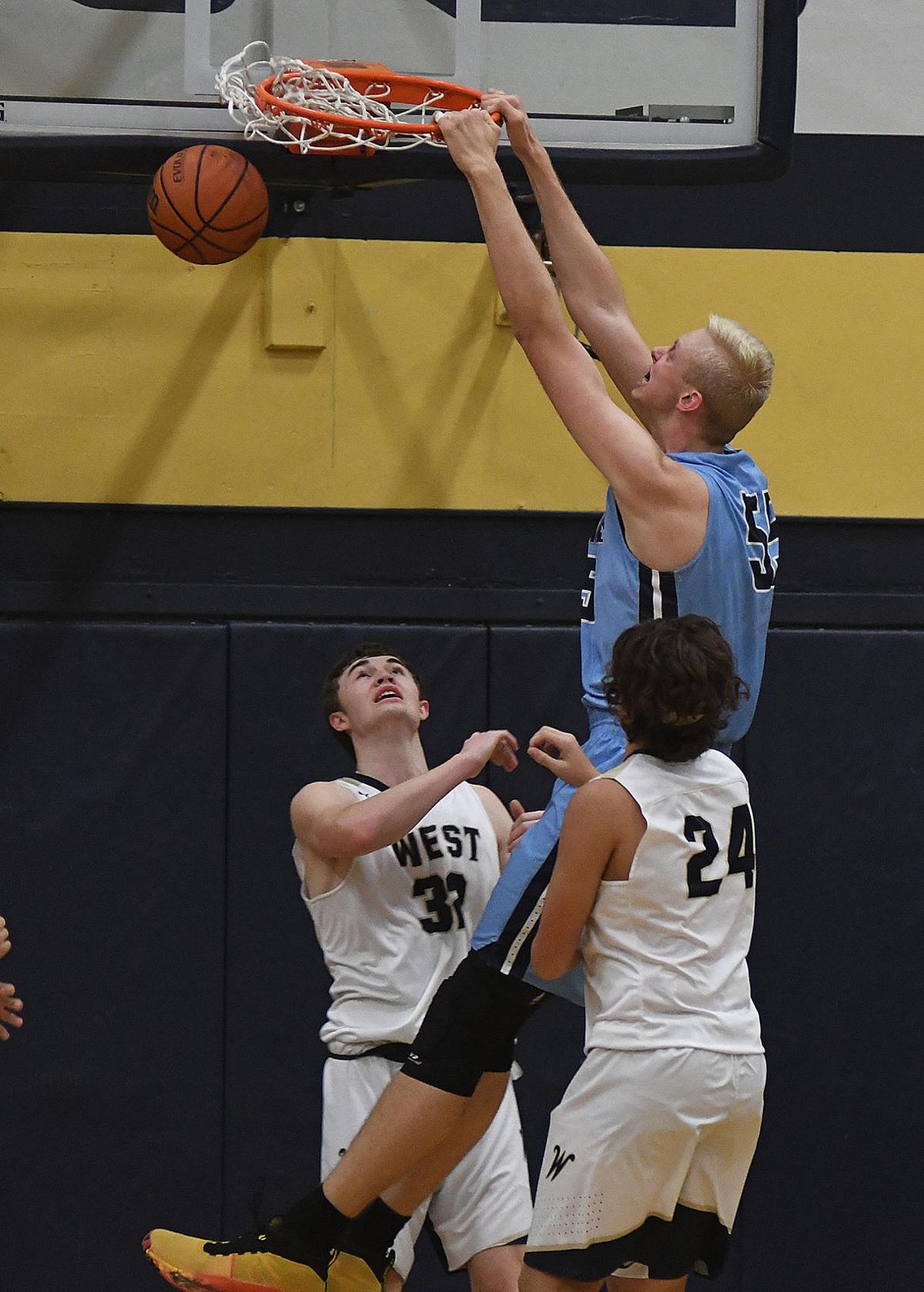 Derek Duman was a bit concerned how his team would come out of the gate Friday night at home against Corvallis High.

His West Albany players had taken final exams early in the day and the school’s pep band wasn’t in the gym because it was at a state competition.

But whatever could have gone wrong never manifested.

West jumped out to a 7-0 lead, had a 19-5 advantage and didn’t see the Spartans close within single digits until late in the Bulldogs’ 67-57 win in a Mid-Willamette Conference boys basketball game.

“That was probably the best start we’ve had all year. The kids came out ready to go,” Duman said. “Our energy, I wasn’t sure. And they proved me wrong, which was great. I had nothing to worry about.”

Koby Ruiz had 22 points, Justin Henderson 16 and TJ Zimmermann 15 for the eighth-ranked Bulldogs (9-4, 4-1 MWC), who won their sixth straight and stayed one behind third-ranked Silverton in the conference standings.

“It was good execution by our team and everybody was doing what they needed to do get the job done,” Ruiz said of maintaining control in the game.

West had to hold off the Spartans in the second quarter as the Spartans found some offense behind the 7-foot-3 Reinalda. The senior scored eight consecutive baskets for his team to close the deficit to 12 two different times.

Corvallis got it to 11 twice, the second time on a Curtis Kuhlman 3-pointer. But Ruiz found Zimmermann for a layin and hit a free throw to push it back to 14. West’s Justin Whittier canned a 3-pointer from the corner as time expired in the half to put the Bulldogs ahead 38-23.

Ruiz had eight points in the second period plus four total assists in the half to help his team keep its cushion.

Ruiz had a 3-pointer early in the third quarter to start a 7-0 run that pushed the West advantage to 19.

Davis scored three straight points for the Spartans, and soon after Reinalda got consecutive dunks on Calvin Cahill assists to close within 14. Two Sebbie Law foul shots and a Davis basket off an offensive rebounds got it back to that margin to close the third.

The teams traded baskets for the first three-plus minutes in the fourth before Corvallis got six straight points, capped by another Cahill pass for a Reinalda score.

The Spartans would get as close as eight in the closing minute but ran out of time. The second half wasn’t pretty for the Bulldogs, who committed 11 of their 15 turnovers after halftime, including seven in the fourth.

“We just came out with no energy to start the game,” CHS coach Ross Duerfeldt said, noting the 7-0 hole and giving up two offensive rebounds in the game’s first 15 seconds.

West also got 11 points from Luke Killinger, who had seven in the first half

The Bulldogs held off rival South Albany on Tuesday and got another win Friday to put just three games between them and another matchup with Silverton, this time at home on Feb. 4. That stretch starts next Tuesday at home against North Salem.

“It was a big week for us,” Duman said. “I knew that if we could get two (wins) and kind of give us that foot forward early, I think that’s going to help us into the second half and when we see (the Foxes) again it will give us the confidence we need.”

Silverton won the first time around, 54-50 at home in the Dec. 16 league opener. Duman said his team knew it could play with the Foxes heading into the contest.

“But it’s one thing to think it, it’s another thing to see it,” the coach said. “We were one or two possessions away from winning that basketball game and I think our kids saw that.”

Ryann Gregg’s college volleyball career is sneaking up on her.

April is a time when many high school seniors are planning for prom, looking forward to their graduation and enjoying their final season of pr…

On Wednesday, any hopes to salvage a spring sports season came to an end.

Plenty of local coaches and athletes are holding out hope that high school sports will still happen this spring.

West Albany's Koby Ruiz passes around Corvallis' Curtis Kuhlman. Ruiz finished with 22 points to lead the Bulldogs to a 67-57 win against the Spartans.

West Albany's Koby Ruiz celebrates a 3-pointer in front of the Corvallis bench. Ruiz scored 22 points to spark the Bulldogs to the win.