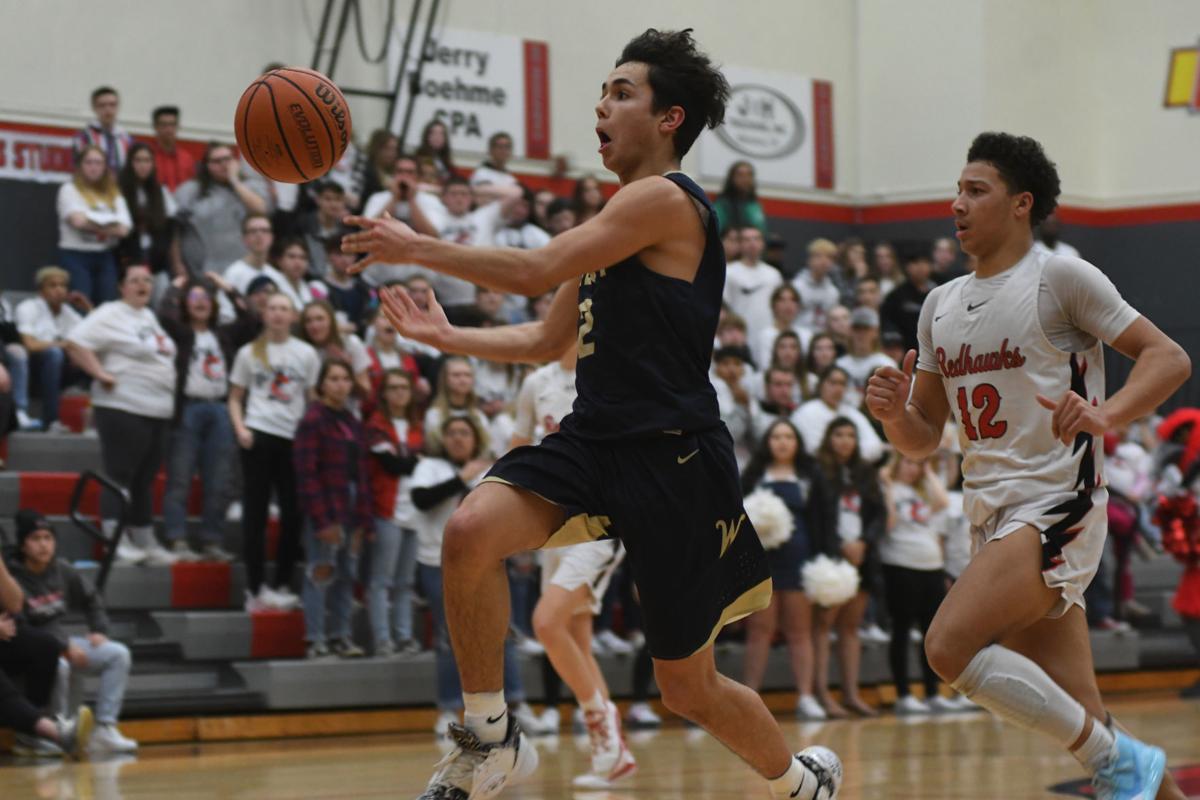 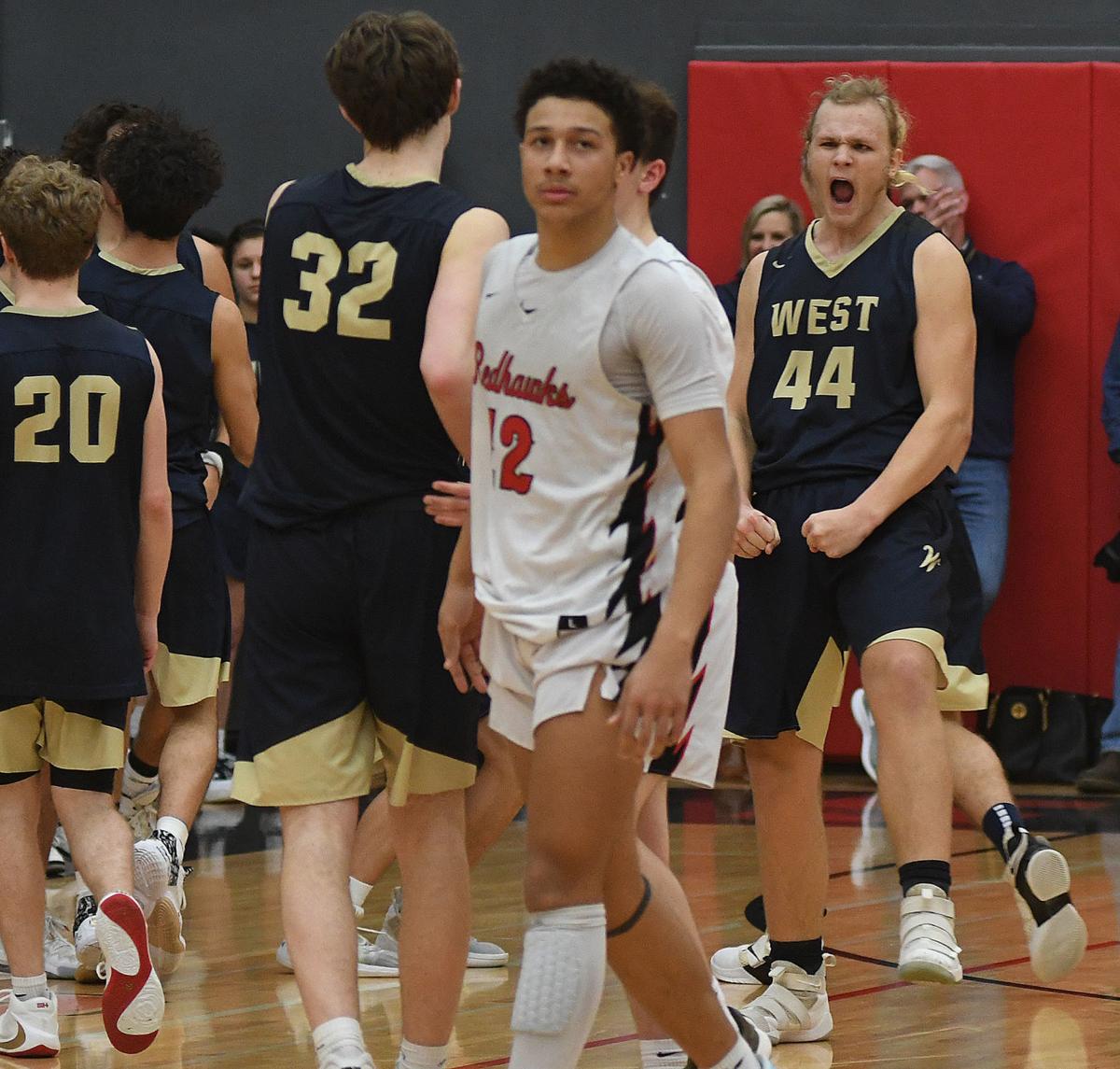 West Albany's TJ Zimmermann (44) celebrates as South Albany's Isaiah Gilliam walks off the court after the Bulldogs' victory over the RedHawks. 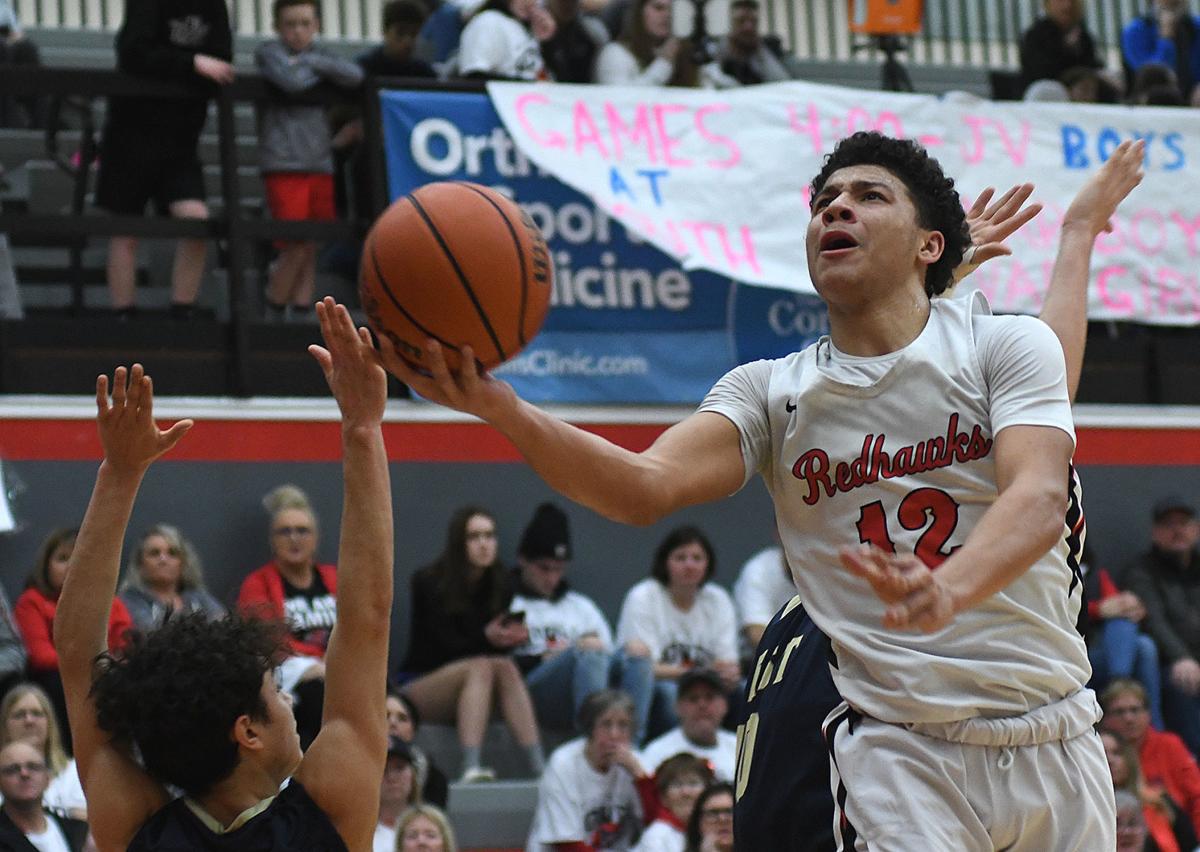 West Albany knew South Albany’s run would come in the second half, and it did.

The host RedHawks trailed by 15 at halftime Friday night but cut the deficit to four less than six minutes later.

The Bulldogs found an answer and didn’t fold despite the pressure of the situation. West built its lead back to double digits early in the fourth quarter and held on for a 66-57 win in Mid-Willamette Conference boys basketball.

“I think it speaks to our maturity,” Bulldogs coach Derek Duman, noting that his team has a bunch of juniors who played varsity as sophomores, and those players avoided the “sophomore mistakes” that cost them a win at South last year.

Luke Killinger had 19 points and TJ Zimmermann 16 for the sixth-ranked Bulldogs (15-5, 10-2), who played their third of five straight road games.

The RedHawks scored six quick points in the first 94 seconds of the third quarter to close within six. Ayden Foster rebounded his own miss and Kaloe Sugioka and Foster followed with transition baskets.

McGlothan’s layup midway through the period had the West lead down to seven. Later, McGlothan finished an and-1 and Gilliam went coast to coast and finished to make it a four-point game with 2:15 left in the third.

Zimmermann, the Bulldogs’ go-to player inside, scored twice at the basket, the second on a Justin Henderson assist to restore the lead to eight, also the margin at the end of the quarter.

Henderson twice blocked Foster on the opening possession of the fourth then hit a 3-pointer from the left wing off a Koby Ruiz assist to push the advantage back to 11.

“Hendo came back with a clutch bucket, so did TJ,” Killinger said. “Koby did a great job of running the floor and just keeping us controlled.”

South got no closer than eight from there. West made 10 of 12 free throws in the final 1:27 to ice the game.

RedHawks coach Tim Matuszak, whose team had 17 points in the first half and 40 in the second, said it’s all about finding consistency.

“It’s just sustaining it. We’ve done it all year in bunches,” he said. “We didn’t really do anything special coming out of the gate other than get out and run and get a couple stops.”

Ruiz, West’s junior point guard, scored the game’s first five points and pushed the Bulldogs to a lead they wouldn’t relinquish. Killinger, a junior guard, scored the team’s last six points of the first for a 13-8 lead.

West went on a 9-1 run through the first 3:40 of the second quarter, getting scoring from four different players to go up 13. An Austin Stanaway 3-pointer later in the period made it a 15-point game.

Ruiz, who finished with 12 points, got the Bulldogs’ final four points of the half at the foul line to keep the lead at 15.

Henderson added nine points for the Bulldogs and Foster six for the RedHawks.

Killinger got the defensive assignment on Gilliam, a talented 6-foot-2 junior guard who had 14 of his 24 after halftime. Killinger called the matchup “a blast” and credited his teammates for their help.

“Luke accepted the challenge on defense and we wanted him to do that because Isaiah’s size gave Austin (Stanaway, 5-11) and Koby (Ruiz, 5-11) trouble in our first game,” Duman said. “We needed Luke to try to keep him off the offensive rebounds and try to stay with him. He did a really good job of that.

“Luke is the guy on our team that, if we need a bucket we know he’s going to get it for us. He’s patient, methodical, really fundamental.”

South and West, if they can finish the regular season in the top eight of the OSAA rankings, will host 5A round of 16 games on March 7 with the winner going to the state tournament. They were fifth and sixth, respectively, in the rankings late Friday night.

South has five remaining regular-season games and West five. Tuesday, the RedHawks host Lebanon and the Bulldogs go to Corvallis.

“We’re just going to try to keep winning ball games and get in the top eight and host. All there’s left to do is win” Matuszak said. “We’ll look back a few weeks from now and we’ll use it to sharpen our teeth and we’ll be better for it.”

West Albany's TJ Zimmermann (44) celebrates as South Albany's Isaiah Gilliam walks off the court after the Bulldogs' victory over the RedHawks.