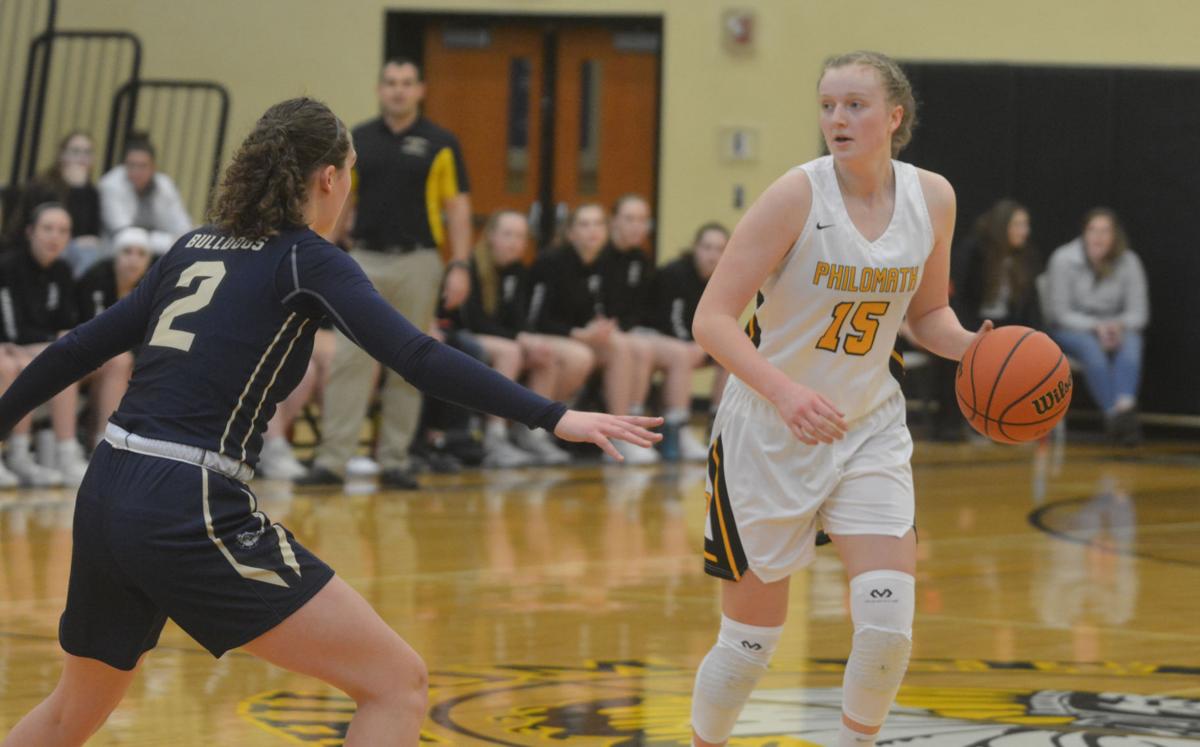 Philomath junior Sage Kramer, right, an all-state basketball player, overcame the nerves of competing in track and field for the first time to qualify for the state meet in three events. 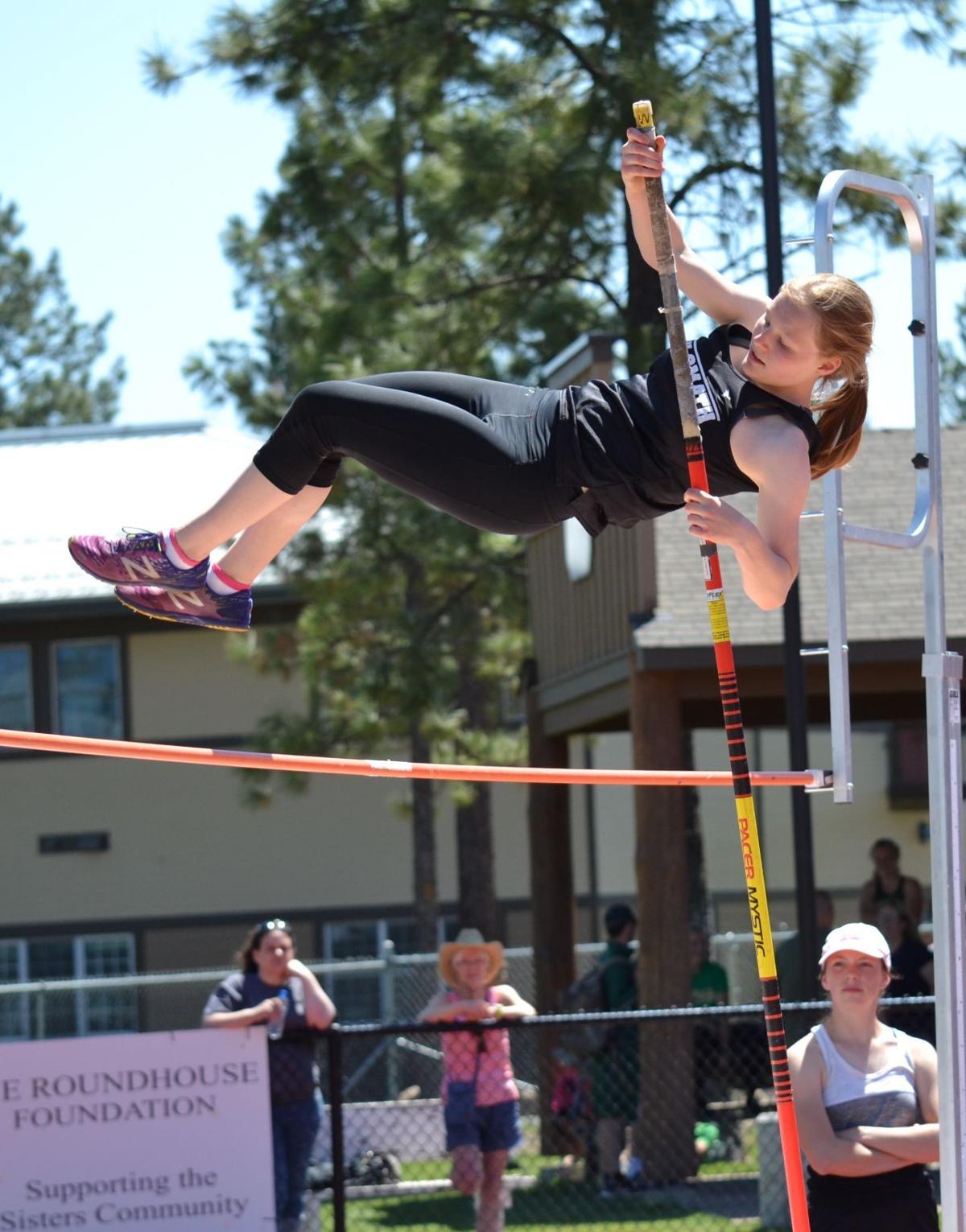 Philomath's Amey McDaniel is tied for the best 4A girls pole vault mark of the season entering this weekend's state meet.

Sage Kramer got nervous at the thought of going out for track and field, a sport she was completely unfamiliar with and unsure of all the events that are involved.

The Philomath High junior has been in many high-pressure situations on the basketball court, where she’s an all-state player.

But this was a completely different challenge.

With the encouragement of her father Casey and friends on the track team, Kramer made a big step forward and discovered she could be successful.

Less than six weeks after attending her first-ever track practice, she qualified for the 4A state meet in three individual events. The two-day meet gets started Friday at Siuslaw High School in Florence.

She has come a long way since having to ask Warriors assistant coach Brian Lucas from which end to throw the javelin.

“I think that was one of the biggest things, is to do something even when it was really scary and intimidating,” Kramer said.

Trying to figure out which events she might enjoy and excel at, Kramer first tried the javelin.

That’s turned out to be her best event, as she has the sixth-best 4A mark of the season at 111 feet, 4 inches. She’ll also compete at state in the discus and triple jump.

Her first meet, on May 1, provided quite the daunting atmosphere as she realized she was on her own. Kramer had no previous experience with individual competition.

“It kind of hit me, like, ‘oh my gosh, I’m all by myself. I have to go do this and everyone’s going to be watching me. There’s not like four other people on the court with me,’” she said. “It was definitely very different.”

But Kramer’s competitive drive has carried her through.

At last week’s district meet, she won the discus and returned to the triple jump to find that she was not in one of the top two qualifying spots for state after her three preliminary attempts.

“Then suddenly she produced a jump that was about a foot and a half farther than she’d done to make sure she did qualify. That’s the kind of kid she is,” said Philomath coach Joe Fulton.

Added Kramer: “I didn’t know what I had to get, but I was just going to get as far as I could and hope that it was good enough.”

Triple jump is an event that as of earlier this week Kramer said she had not practiced. She’s been afraid that she might hurt herself.

But she has steadily developed the skills for the technical event and has seen her results improve meet after meet.

“She’s a very serious student at whatever she’s doing,” Fulton said. “When our throwing coach tells her you need to go home and look at some videos of world-class discus throwers, javelin throwers, she does it. She studies it, she’s a fast learner and she’s a very coachable kid.”

Philomath senior Amey McDaniel is chasing a state title in the pole vault, an event in which she shares the top 4A clearance of the season. Teammate Emily Boutilier is tied for fifth.

Philomath’s Alivia Pittman is fourth on the 4A season lists in the 100-meter hurdles and 300 hurdles. She also runs a leg on the sixth-seeded 4x400 relay.

Philomath’s Mia Rust is tied for third in the shot put. Sweet Home’s Shelbey Nichol is fifth in that event and ninth in the triple jump.

Philomath sophomore Brody Bushnell will have a busy state meet as he tackles the 800 and 1,500, events in which he has the top 4A times of the season, and will run a leg on the state-leading 4x400 relay.

But Bushnell trained hard with fellow state qualifier Mateo Candanoza (3,000) and made himself the favorite. Bushnell has the fastest 4A 800 time of the season by nearly two seconds and the best 1,500 time by almost seven seconds.

Fulton says Bushnell, who placed seventh in state cross-country, is better on the track because of his “blistering speed at the end of his races.” On the track this season, he’s defeated those who finished ahead of him in cross country.

But state races on the track can be tactical.

“If he has to run a faster time to win state he’s ready to do it. But it won’t be easy,” Fulton said.

On paper, Bushnell’s performances plus some strong results from his teammates have the Warriors certainly within reach of a trophy with a top-four finish and possibly a state title.

Candanoza has the fourth-best 3,000 time of the spring, Sean Cummings is third in the 400, Levi Knutson seventh in the 800 and Micah Matthews is fourth in the 110 hurdles, tied for eighth in the high jump and tied for ninth in the pole vault.

Sweet Home’s Tristan Calkins will try to improve on his second-place state finish in the long jump in 2019. He went a personal-best 22-5½ to win the district title last week, putting him on top of the 4A season list.

Teammate Mason Lopez has the fifth-best mark in the javelin.

5A track and field preview: Stefan overcomes injury to qualify for season-ending meet

Monroe High junior Laura Young has put herself in the position she’s in now, as a favorite at the 2A track and field state meet, with steady i…

Not having a 2020 collegiate outdoor track and field season didn’t seem to slow down Zack Short in the pursuit of his goals.

Philomath junior Sage Kramer, right, an all-state basketball player, overcame the nerves of competing in track and field for the first time to qualify for the state meet in three events.

Philomath's Amey McDaniel is tied for the best 4A girls pole vault mark of the season entering this weekend's state meet.