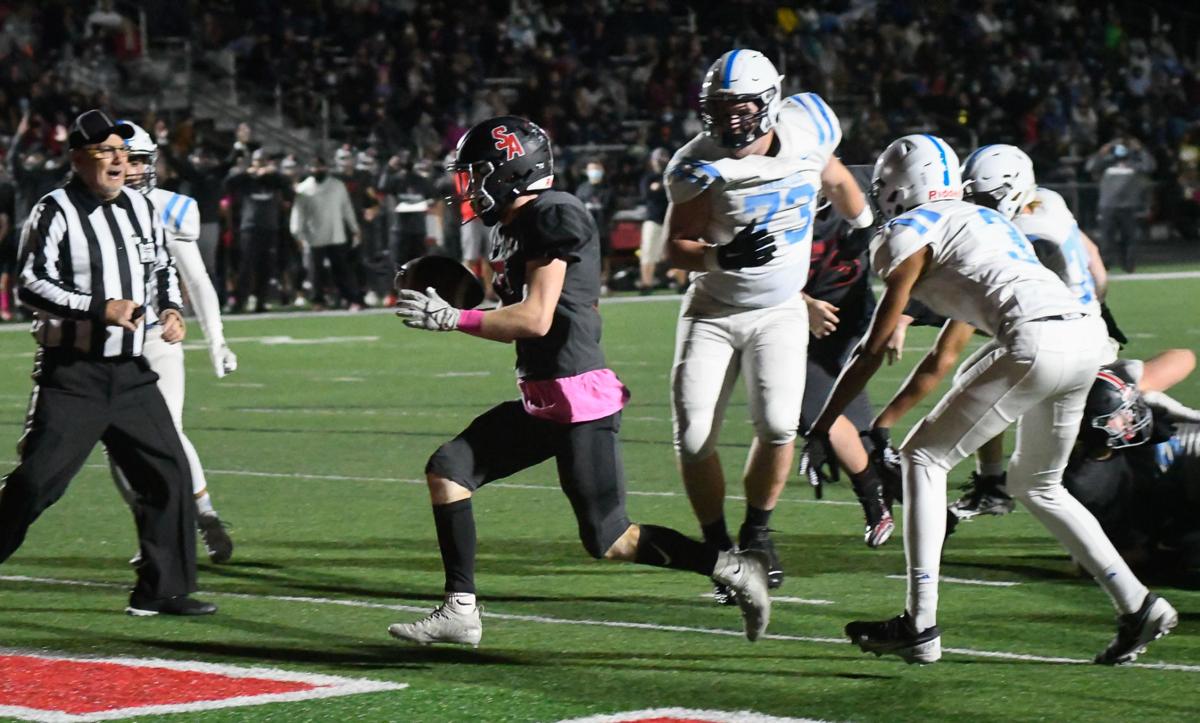 South Albany's Tyler Seiber (6) scores a touchdown in the first half. Seiber had four touchdowns in all, including an 85-yard kickoff return in the RedHawks 33-21 win against visiting Corvallis. 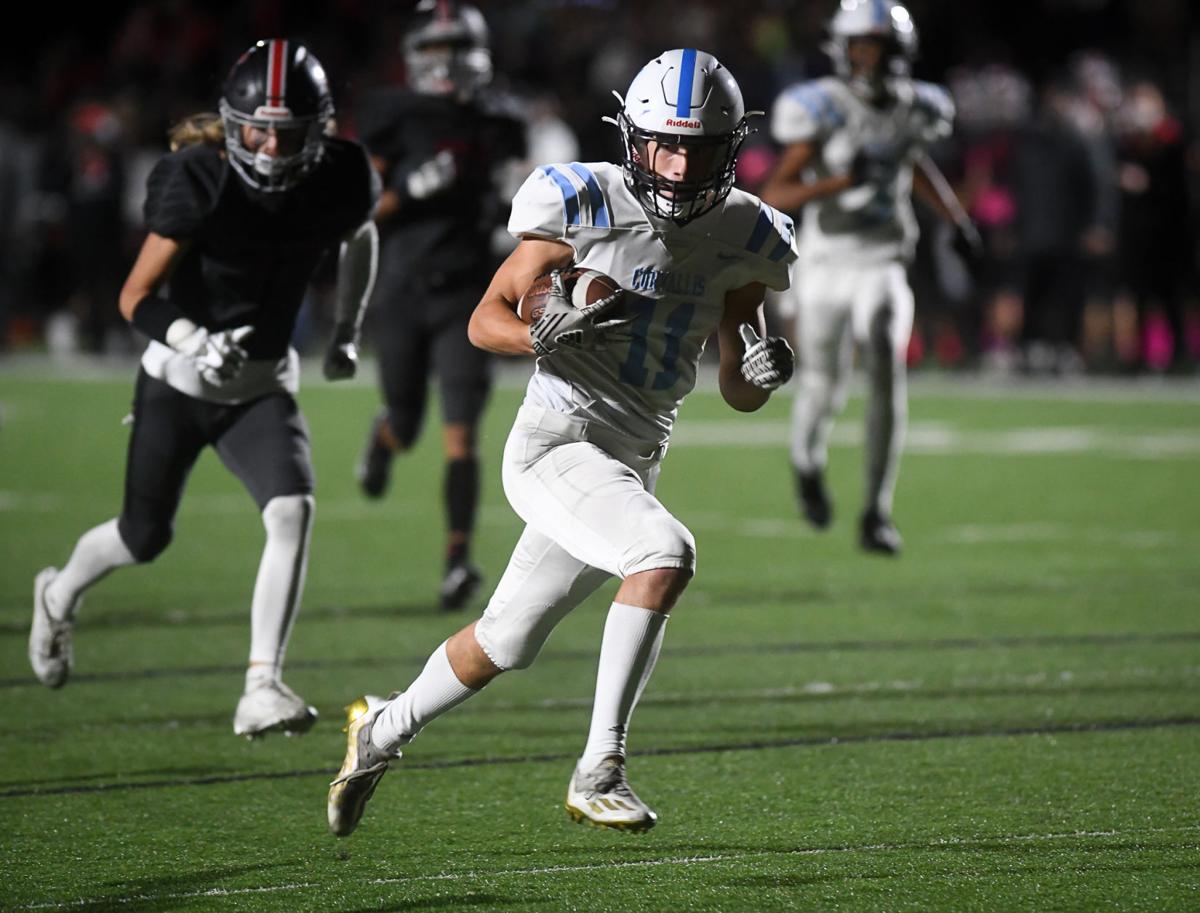 Corvallis' Carson Wright (11) scores a first-half touchdown. He had four catches for 74 yards. 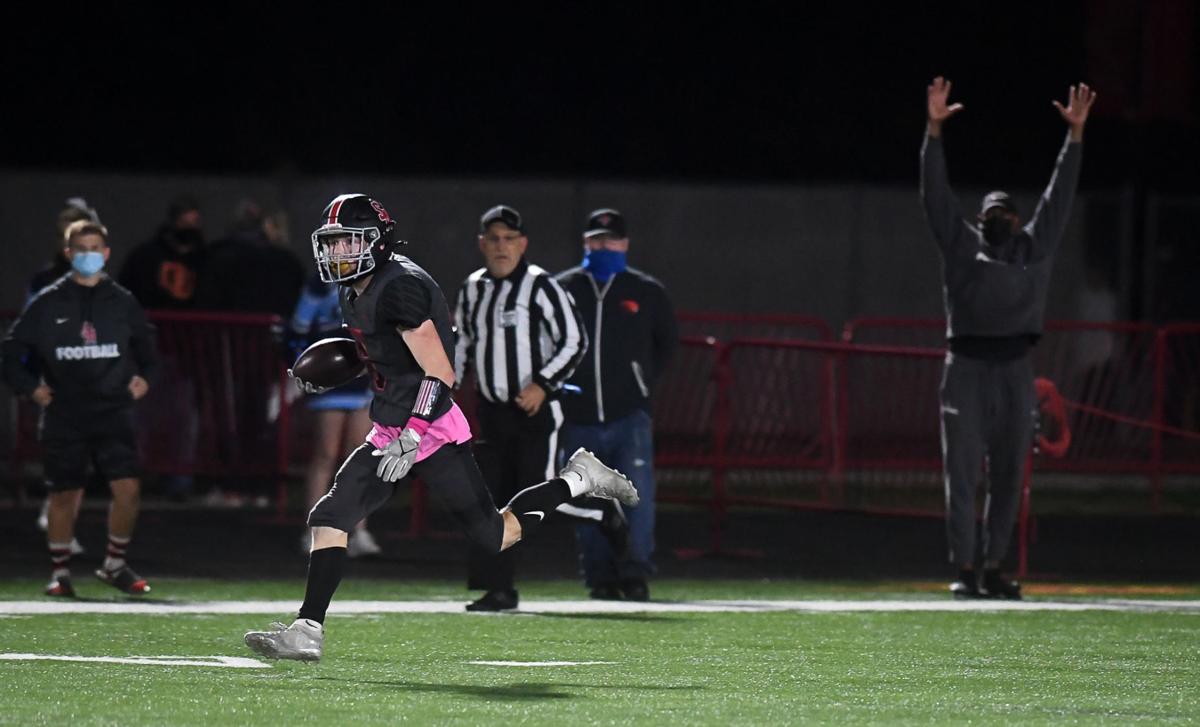 Tyler Seiber returns a kickoff for a touchdown late in the first half that gave South Albany a 26-14 lead. 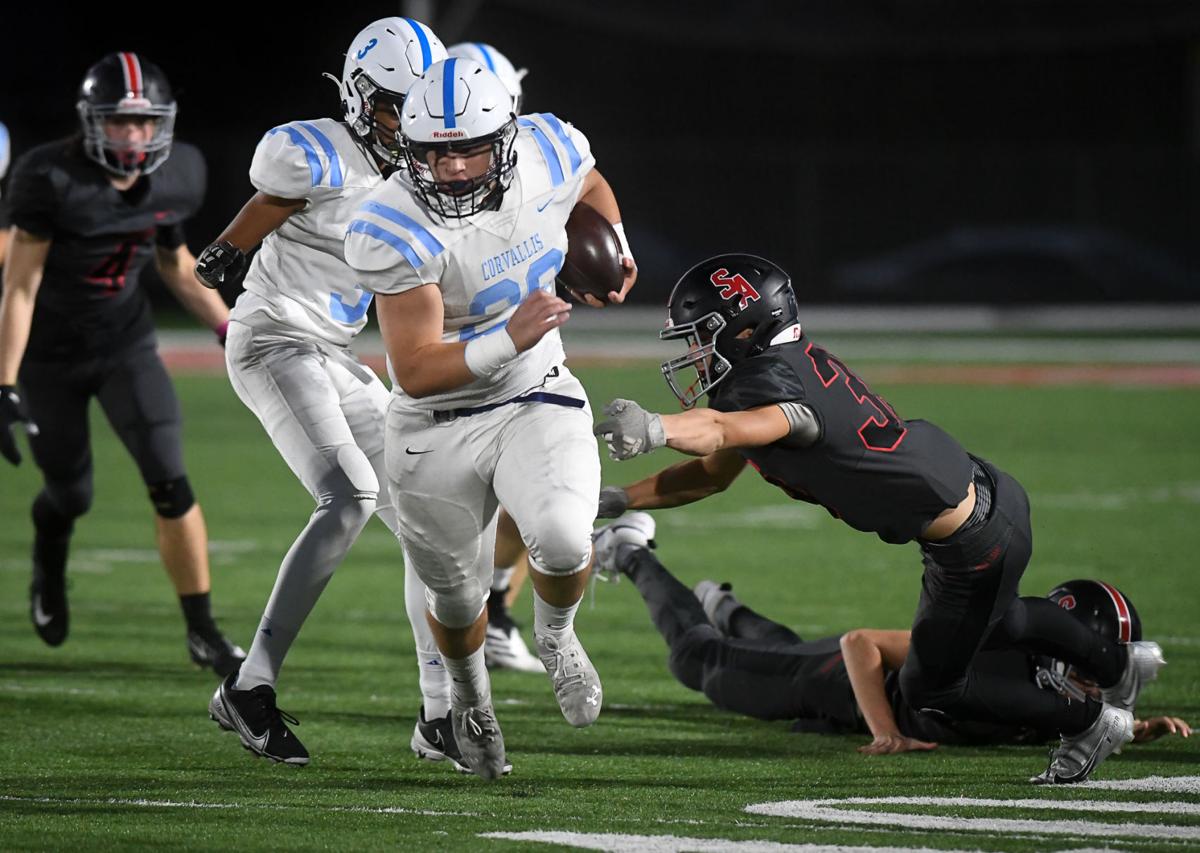 Corvallis' Nate Thompson (33) carries the ball on a 23-yard run. He also had 45 yards receiving.

The game clock at RedHawks Stadium read 8:05 in the fourth quarter Friday night when South Albany took possession at its own 28, having stopped Toby Worsch and Corvallis on a fourth-down play.

South led by two scores in a game that was still up for grabs, a significant game for both teams and their Class 5A state playoff hopes.

But behind a dominant offensive line and some hard running, the RedHawks never gave the ball and took a big step forward with a 33-21 Mid-Willamette Conference football win.

Tyler Seiber, who finished with 132 rushing yards and four total touchdowns, including a kickoff return, shared the load down the stretch with Jedidiah “Diah” Kollaer and Maxwell Louber. South (4-2, 2-2) converted four first downs on the final drive and ended the game with quarterback Kaden Younger taking a knee on a snap from the Corvallis 15.

“It’s just one of those feelings where you’re not worried about it and you know and believe that your team can do it,” said South senior offensive lineman Matthew Cobb II. “I honestly think our offensive line’s really good and a big part of our running game.”

The RedHawks finished with 327 yards rushing.

Kollaer broke the 100-yard rushing barrier on a 7-yard run that gave the RedHawks their final first down of the contest. Another Kollaer 7-yard scamper on the last drive helped South convert on a 4th-and-2 play.

He rushed 14 times for 102 yards for the game and a 12-yard touchdown run in the first quarter. Teammate Avery Adams added 55 yards on five carries, including a 28-yarder.

“It just feels great that our offense can’t be stopped. We just keep going over and over again and running it down their throat and they can’t stop anything,” Kollaer said. “It was crazy. I owe it all to our O-line. They did great today.”

Corvallis (3-3, 2-2) had struggles moving the ball on the ground, rushing 26 times for 95 yards. Twenty-three of that total came on a Nathan Thompson run that looked to have been set up as a pass play.

Worsch led the Spartans with 39 yards and a touchdown on 15 carries.

Quarterback Carter Steeves was 16-of-24 passing for 187 yards and two second-quarter touchdowns to Carson Wright and Truman Brasfield. Wright had four catches for 74 yards and Thompson four for 45.

Corvallis was able to move the ball, just not enough.

“At times, it was just too sporadic. We wanted to be able to run the ball better. We’ve just got to fix some things there,” Spartans coach Chris McGowan said. “At times there were plays to be made and we didn’t make them. We’ve just got to work on ourselves. We’ve got three games to go and we’ve got to learn from it.”

A 7-7 game changed in a hurry in the final six-plus minutes of the first half.

Sparked by a 28-yard Avery Adams run and a 25-yard pass from Kaden Younger to Devin “DJ” Jones, the RedHawks got in the end zone on a Seiber 5-yard touchdown run.

Corvallis wasted no time getting back in it.

Steeves hit Thompson on pass plays of 23 and 9 yards before the visitors finished off a five-play drive with a Brasfield 32-yard touchdown grab.

But Seiber put the home team back in full control on homecoming night when he took the kickoff near the sideline and raced past the RedHawk sideline 85 yards for the score. Seiber’s two-point conversion run failed, but South led 26-14 at halftime.

The RedHawks then opened the third quarter with another touchdown, a 2-yard Seiber run, on a 10-play, 68-yard drive aided by a 13-yard Kollaer run and a Corvallis personal foul.

“Our offensive line, when they play up to their potential there’s different things we can do. We really feel confident running the football,” said South co-head coach David Younger. “Matt Cobb, Ramie Halbrook, big Dave Marsh, they’re our seniors on the offensive line and they’ve kind of taken ownership of that group. They do a great job in practice and it showed tonight.”

Next up is a game at rival West Albany (6-0, 4-0) next Thursday in a contest coach Younger said his players are already excited about.

It’s a race in the Mid-Willamette (5A Special District 3) to claim the conference’s three automatic playoff spots in the 16-team OSAA bracket. After league berths are awarded, four additional spots will be available based on the final power rankings when the regular season concludes.

West Albany and Silverton remain undefeated in Mid-Willamette play, while Corvallis, Dallas, Lebanon and South all have two losses.

Junction City proves too much for Santiam Christian plus roundup, Page B3

West Albany High won the defensive and special teams phases and thus the game against Lebanon on Thursday night.

A Lebanon man filed an $850,000 lawsuit alleging a crash he was injured by was caused in part by a negligent police officer who did not arrest…

Here is a look at this week's high school football games from teams in our coverage area.

High school football: West finds its spark and pulls away from South for 29-13 win

After a first half largely dominated at the line of scrimmage by the visitors, West Albany High was looking for just one spark to get some mom…

South Albany's Tyler Seiber (6) scores a touchdown in the first half. Seiber had four touchdowns in all, including an 85-yard kickoff return in the RedHawks 33-21 win against visiting Corvallis.

Corvallis' Carson Wright (11) scores a first-half touchdown. He had four catches for 74 yards.

Tyler Seiber returns a kickoff for a touchdown late in the first half that gave South Albany a 26-14 lead.

Corvallis' Nate Thompson (33) carries the ball on a 23-yard run. He also had 45 yards receiving.