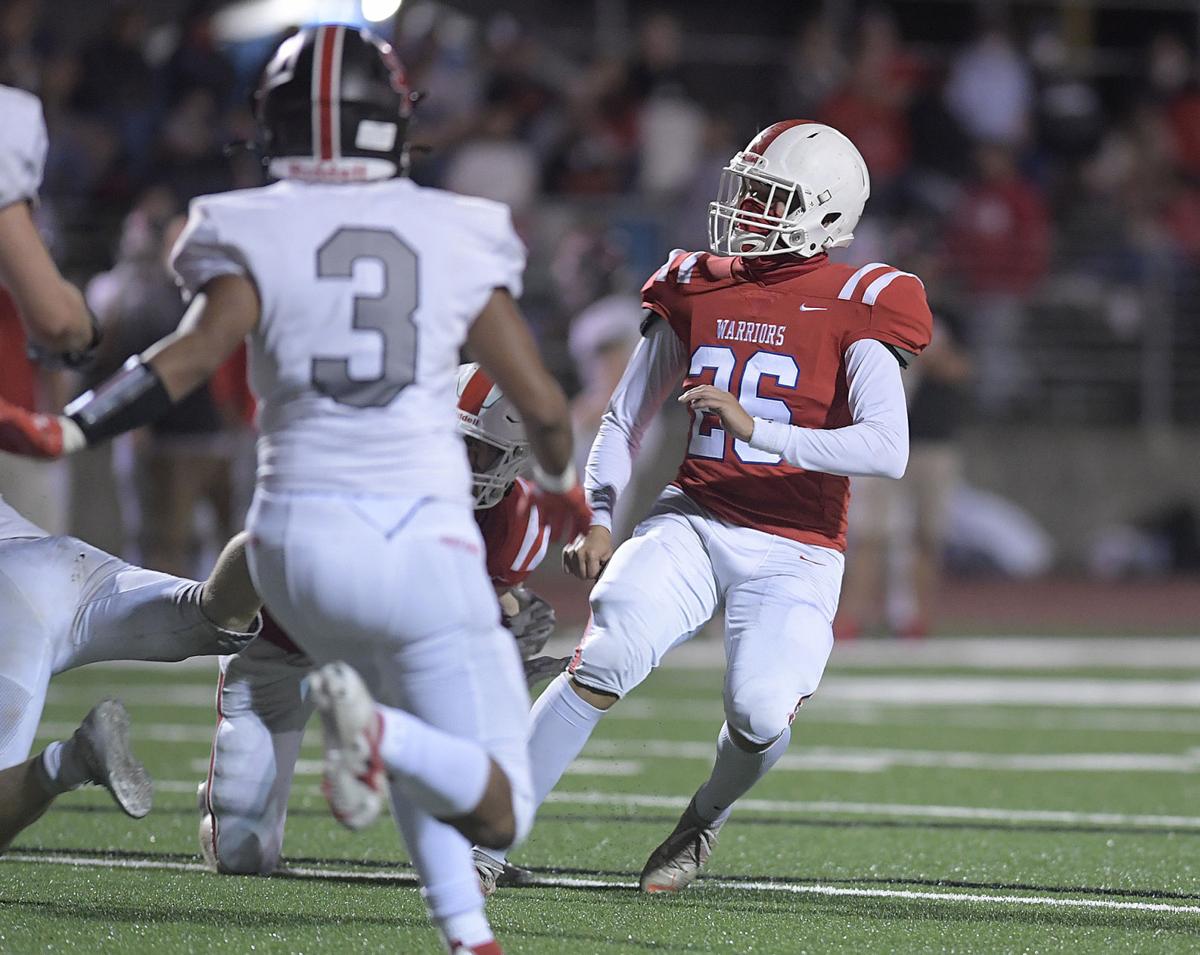 Lebanon High senior Caleb Christner attempts a kick during the Warriors' game against South Albany earlier this season. Christner is playing for both the LHS football and the soccer teams this season. 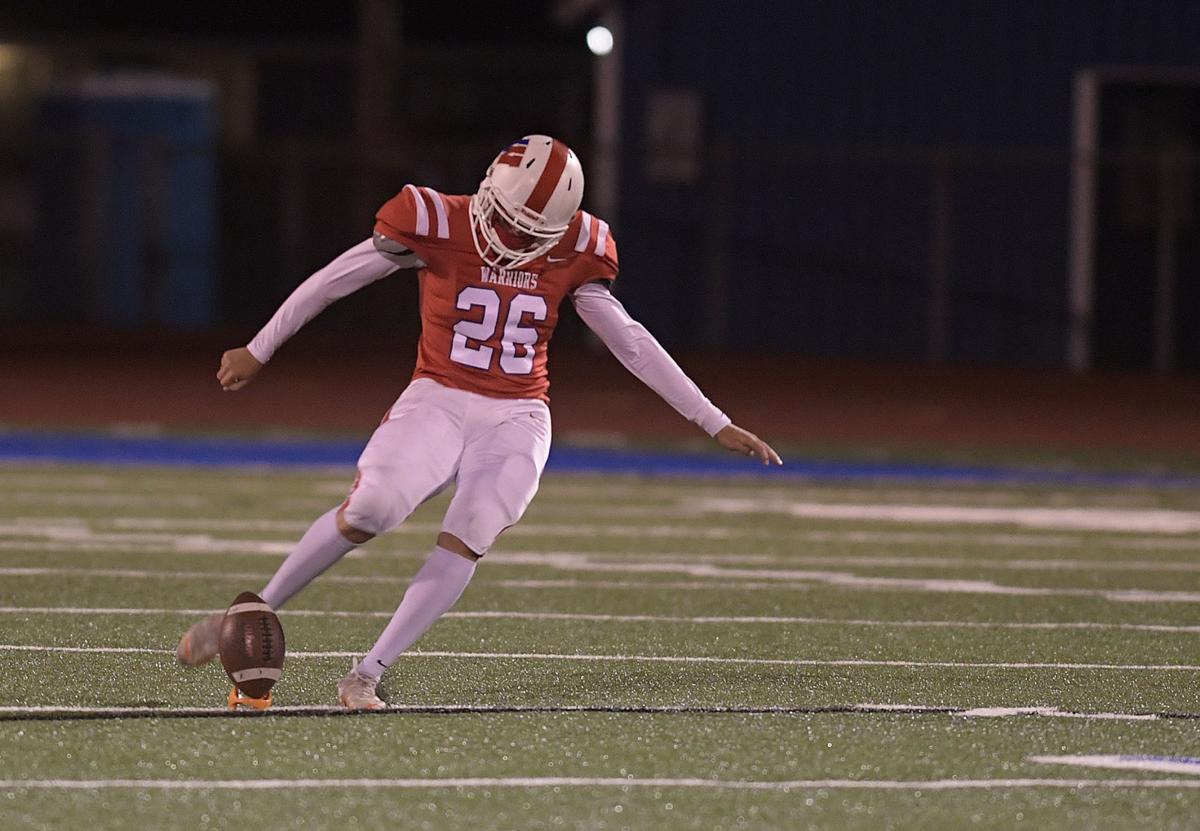 Caleb Christner kicks off against South Albany. He routinely kicks it to the end zone for a touchback. 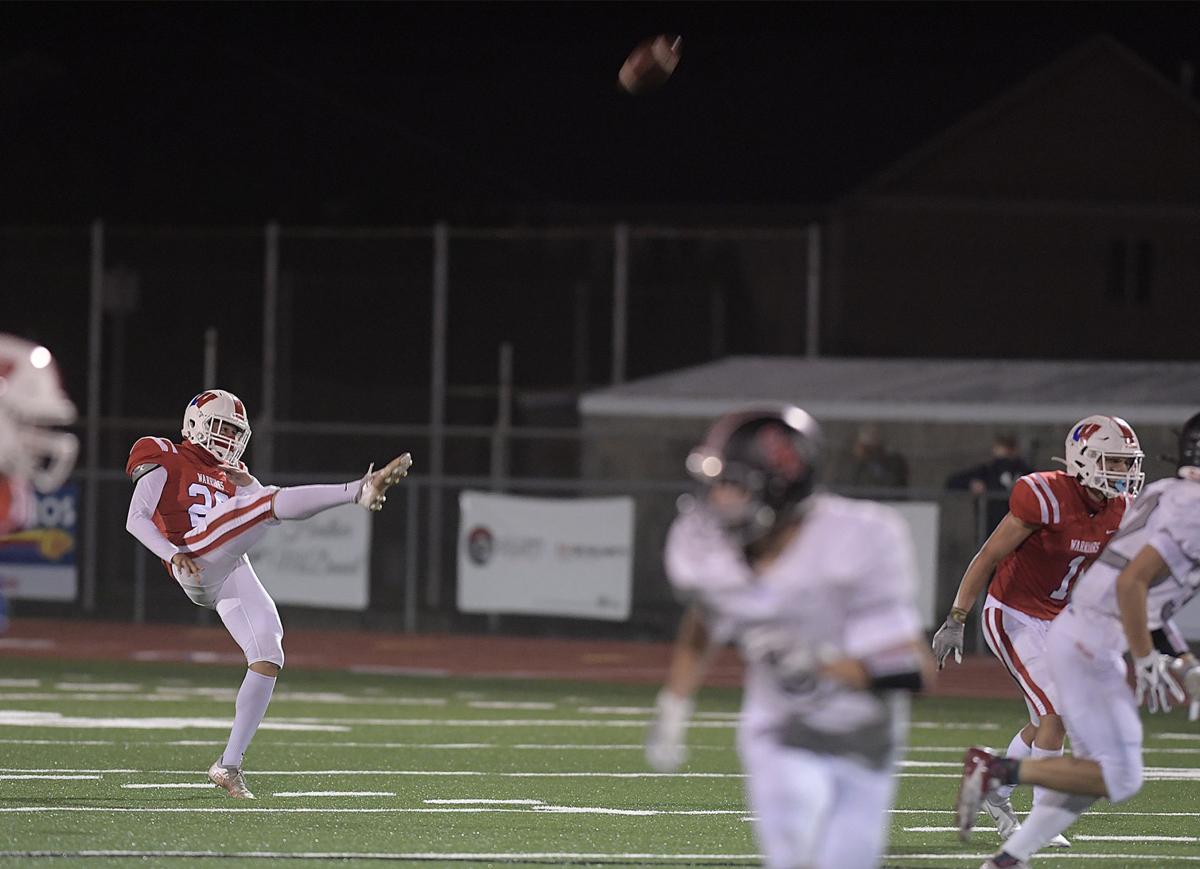 Caleb Christner also serves as the Warriors' punter and said punting is a lot like drop-kicking a soccer ball.

In a 24-7 Mid-Willamette Conference football victory over Crescent Valley on Friday night, Lebanon High senior Caleb Christner made all three of his extra-point attempts as well as a 26-yard field goal, launched a kickoff into the end zone for a touchback and handled the punting duties for the Warriors.

It was not a bad night’s work for a soccer player who had never played football before this season. Christner’s development has given the Warriors (4-4, 4-2) more options in the kicking game than is typical for a high school team.

First-year Lebanon head coach Troy Walker didn’t know what to think when Christner approached him at a practice this summer to talk about playing football and soccer this fall.

“When he came up to me and asked me at the beginning of the year, I didn’t honestly know who he was. I talked to my staff and they said, ‘He’s good. He can kick it,’” Walker recalled. “He went out there a couple of times, and it’s like ‘We have a weapon.’”

Christner said he first started thinking about kicking for the football team during his sophomore year. His family hosted an exchange student who was a dedicated soccer player but grew intrigued by his exposure to American football and talked about wanting to try it.

Those conversations stuck with him and this fall Christner decided to give it a try.

“I went out for practice one day and tried it out, wasn’t too terrible at it,” Christner said. “Zero training. I play soccer year around … figured it couldn’t be too much different. So I just tried that and it was alright.”

Christner said the coaches for both the football and soccer teams have made it really easy for him to do both sports and he continues to be a key member of the Lebanon boys soccer team. He is tied for the most goals on the season, with eight, and has a team-leading five assists for the Warriors.

He has enjoyed the camaraderie of the football team and said his teammates have fully accepted him even though he is by necessity a part-time participant in their practices.

“It has not been hard to balance at all,” Christner said.

The football team does not have a kicking coach on staff this season, so much of his learning process has been trial and error. He practices at least once per week with snapper Luke Taylor and holder Nathaniel Gourley.

A couple weeks ago Josh Sandberg, a former kicker who has served on the Lebanon coaching staff in the past, came to a practice and gave the kicking unit some pointers. Christner said that helped and they have been more consistent in the last two games.

“The timing comes pretty fast. The more you do it, the more you get it dialed down,” Christner said.

While he is still new to kicking a football, Christner brings great leg strength and tremendous athleticism to the role. It is rare in high school football to see kickoffs sent into the end zone for a touchback, but Christner has that ability.

“Any time I can guarantee the ball will be starting at the 20-yard line, at the high school level, that is a rare gift,” Walker said, adding that Christner can also send kicks to a specific spot for a return if the coaches identify a weakness.

Christner has made field goals in practice from 45 yards. He missed a 41-yard attempt during the Warriors’ win at Central. The kick had plenty of distance, but he misjudged the wind and pulled it wide.

He has also taken over the punting duties for the Warriors. Punting is a lot like the drop kicks taken by goalkeepers in soccer, Christner said, and even though that is not his position it is something soccer players do regularly.

The main difference for him between kicking and punting is the personal risk. Kickers are protected but a punter who is holding the ball can be tackled.

“Punting is definitely more sketch for me. I could get tackled. I could absolutely get pounced,” Christner said.

This is likely going to be his only football season. He plans to play Division I soccer and is still talking with different college coaches about his options. But he is very happy he was able to get a taste of high school football.

Next: Lebanon at Silverton, 7 p.m. Friday

Lebanon High was shut out at Silverton on Friday night, falling 35-0 to the Special District 2 champions.

Lebanon High lost its 5A state playoff game, 37-7, at Canby on Friday night.

Lebanon High senior Caleb Christner attempts a kick during the Warriors' game against South Albany earlier this season. Christner is playing for both the LHS football and the soccer teams this season.

Caleb Christner kicks off against South Albany. He routinely kicks it to the end zone for a touchback.

Caleb Christner also serves as the Warriors' punter and said punting is a lot like drop-kicking a soccer ball.