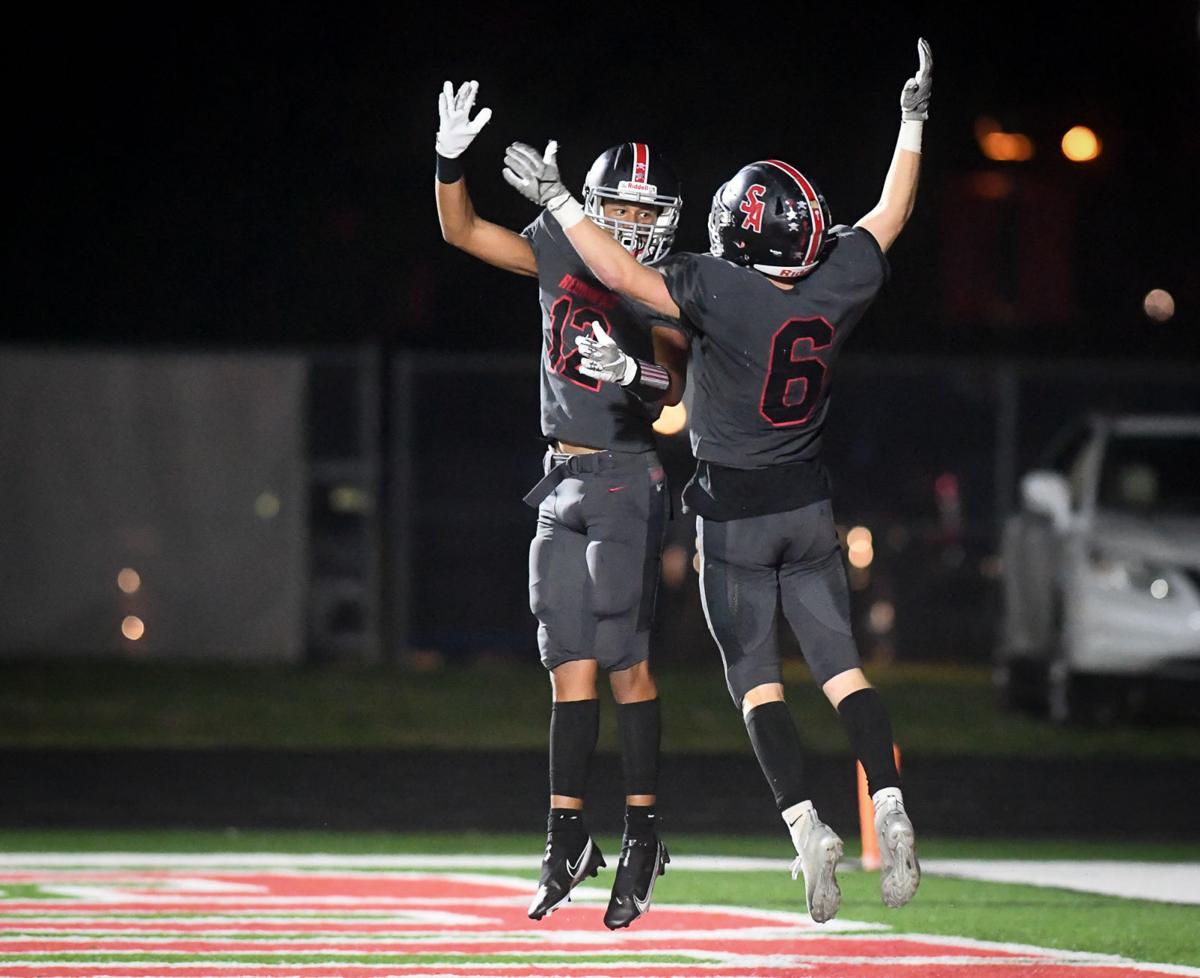 South Albany's DeShawn Gilliam (12) and Tyler Seiber (6) celebrate after a first-half touchdown. South Albany scored twice in the second quarter to close within a point but lost 35-12. 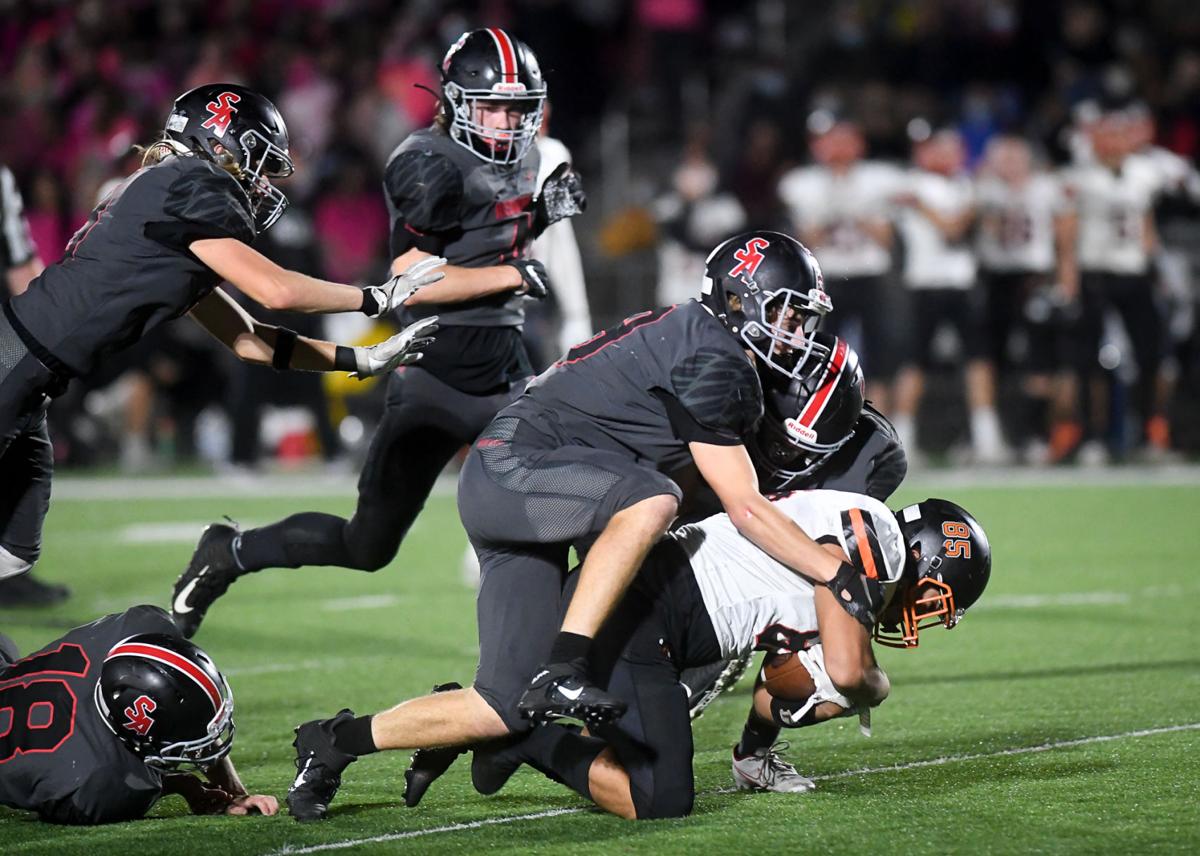 A group of South Albany defenders bring down Dallas' Emiliano Rocha (85). The RedHawks held the Dragons scoreless in the second quarter but gave up 22 points in the second half. 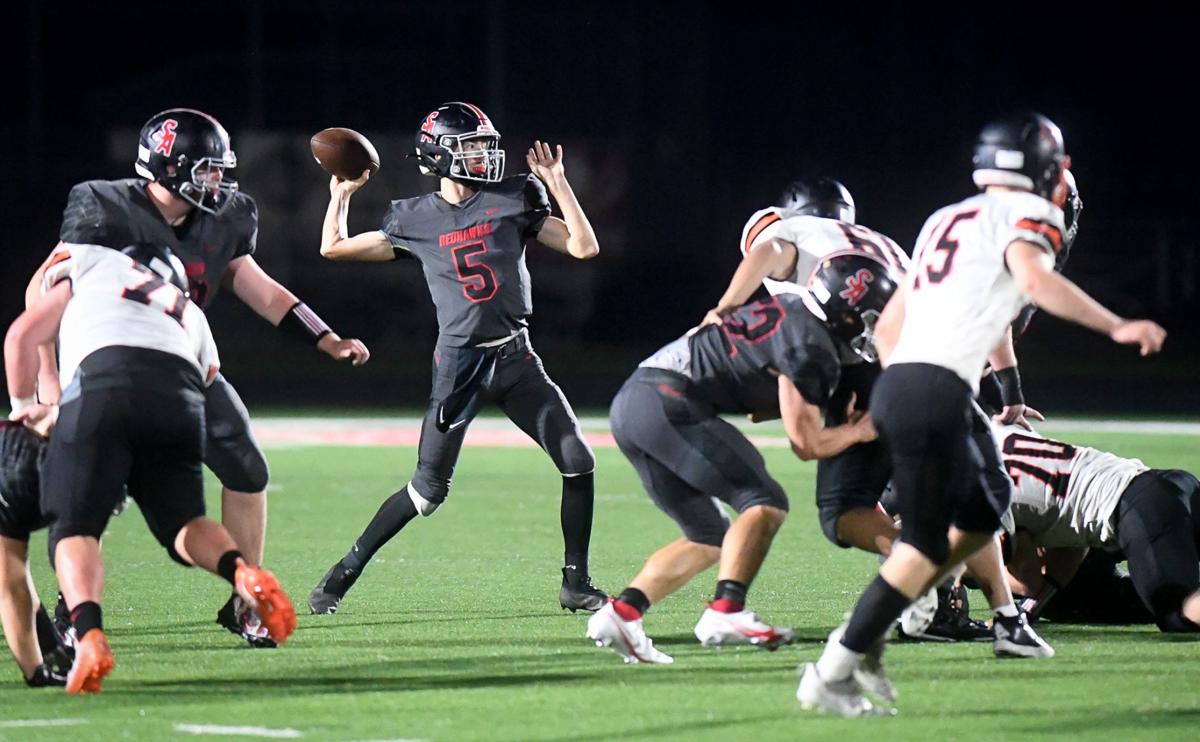 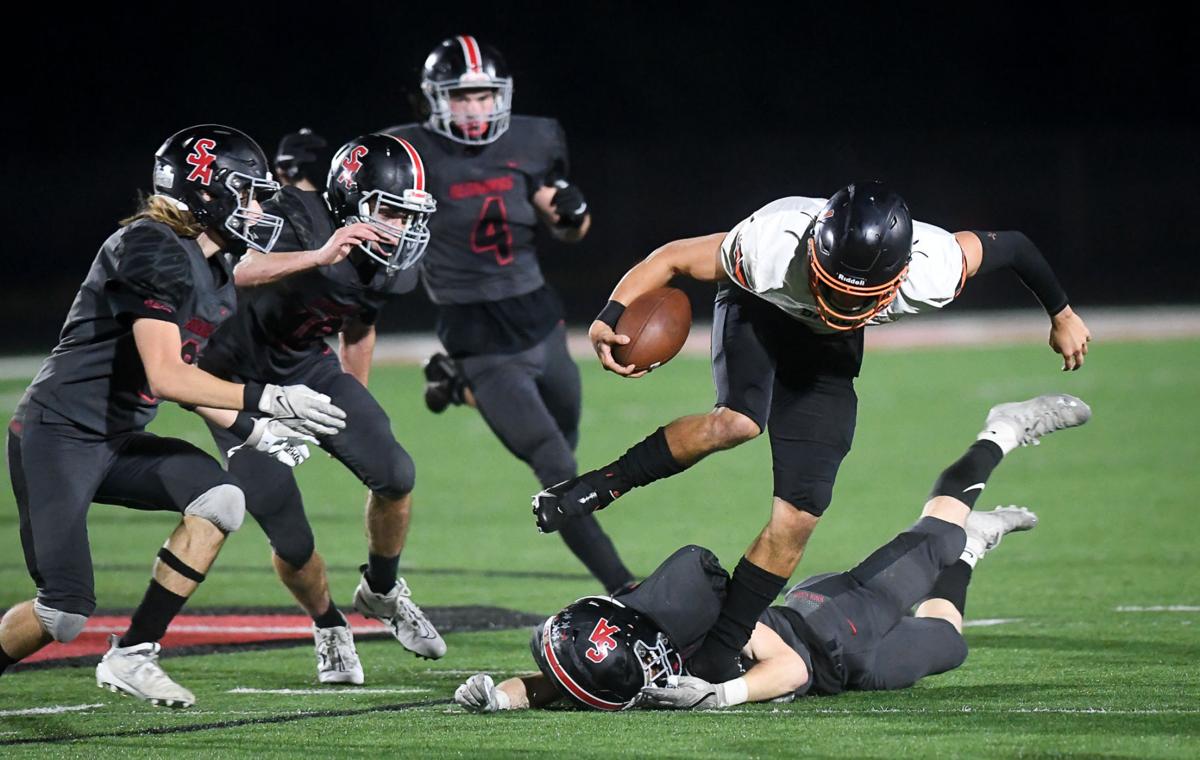 A group of South Albany defenders stop Dallas' Ashton Foster (1). Foster, the Dragons' quarterback, was held to minus-22 yards rushing.

Short fields and some costly RedHawks penalties helped give the visiting Dragons an edge that they never surrendered.

Tenth-ranked Dallas scored on its first two possessions after halftime to pull away for a 35-12 win in a Mid-Willamette Conference football game.

But an unsportsmanlike conduct penalty gave Dallas a first down, and the Dragons turned it into a 13-play, 66-yard drive that Logan Person finished off with a 2-yard touchdown run.

Dallas then forced a three-and-out, took the ball at the South 49 after a 16-yard James Partridge punt return and found the end zone four plays later on Person’s 41 yard run. The RedHawks couldn’t gain much traction from there.

“We’ve got to get out of our own way. That shifted the momentum, and you really saw that on their drive because they took it down and scored,” South co-head coach David Younger said of the 15-yard penalty. “From that point on, they were able to do pretty much anything they wanted to do against us, offensively and defensively.”

The Dragons recovered an onside kick on the opening kickoff and drove the ball 49 yards, finishing it with a 2-yard Corey Miller touchdown run.

A short punt at the end of the RedHawks possession put the ball at the Dallas 49. Ashton Foster hit Emiliano Rocha for a 17-yard pass, and three snaps later Brock Dunkin scored on a 6-yard run.

Person made the first point-after try but missed the second, giving the Dragons a 13-0 advantage.

South responded, taking more than eight minutes off the clock before Tyler Seiber plunged into the end zone for a 1-yard touchdown. The RedHawks converted two third downs and a fourth on the 15-play drive, which included just two passes, both Kaden Younger completions to DeShawn Gilliam.

South forced a three-and-out and went down the field again, but at a little quicker pace. This time the home team went 69 yards in less than two minutes, as Seiber got behind the defense to haul in a 33-yard touchdown pass from Younger.

Both Jerron Berry kick attempts were low and into the line, leaving the RedHawks down 13-12.

Dallas reached the South 19 late in the half, but a Dragons holding penalty and back-to-back sacks by Seiber and Jaden Pang forced a punt.

Seiber, a senior running back and linebacker who was in on big plays on both sides of the ball, said his team didn’t have the same spark at the beginning of the game that he’s used to seeing.

“A lot of time we come out with a lot of heart and a lot of passion because we just want to win. It was there before the game. But when the game started and at halftime it just wasn’t really there. I think that kind of killed us, sort of,” he said. “We went into half and everybody was still down, even though we were just down by one. Then they came out and scored on their first couple drives and we couldn’t put anything together.”

South had four personal fouls to Dallas’ two, but none were impactful as the one called on the RedHawks early in the third quarter.

“We did some really good things, too,” coach Younger said. “We were able to throw the ball. We were able to run the ball out of our I-set. So those are the things we’ll continue to take a look at and get better at.”

Despite the loss, South is still well within reach of the 5A state playoffs with four regular-season games left, starting with next week’s homecoming contest against Corvallis.

Only the top three Mid-Willamette teams get automatic berths into the 16-team bracket. But the strength of the conference could results in more teams grabbing the four remaining statewide spots that will be awarded based on the final OSAA power rankings.

“This is going to make us work harder and make us want it more. It makes us angry to lose at home like that,” Seiber said. “We’ve got Corvallis next week and we’ll come ready to play.”

Kaden Younger, the coach’s son, was 7-of-17 passing for 83 yards with one touchdown and one interception. Gilliam had four receptions for 29 yards and Seiber two for 44.

Person rushed for 149 yards and three scores on 25 carries. Foster completed 4 of 7 passes for 79 yards, with Kolby Johnson-Sallee catching three balls for 62 yards.

Please see this story at the website for video.

West Albany High passed another test Friday night, showing off a balanced offense even without its top running back available for a second str…

Here is a look at the high school football games in our coverage areas this weekend.

Prep football: South Albany dominates after slow start to get to 2-0

South Albany wasn’t playing the brand of football it worked to establish all summer.

West Albany High won the defensive and special teams phases and thus the game against Lebanon on Thursday night.

The game clock at RedHawks Stadium read 8:05 in the fourth quarter Friday night when South Albany took possession at its own 28, having stoppe…

South Albany's DeShawn Gilliam (12) and Tyler Seiber (6) celebrate after a first-half touchdown. South Albany scored twice in the second quarter to close within a point but lost 35-12.

A group of South Albany defenders bring down Dallas' Emiliano Rocha (85). The RedHawks held the Dragons scoreless in the second quarter but gave up 22 points in the second half.

A group of South Albany defenders stop Dallas' Ashton Foster (1). Foster, the Dragons' quarterback, was held to minus-22 yards rushing.