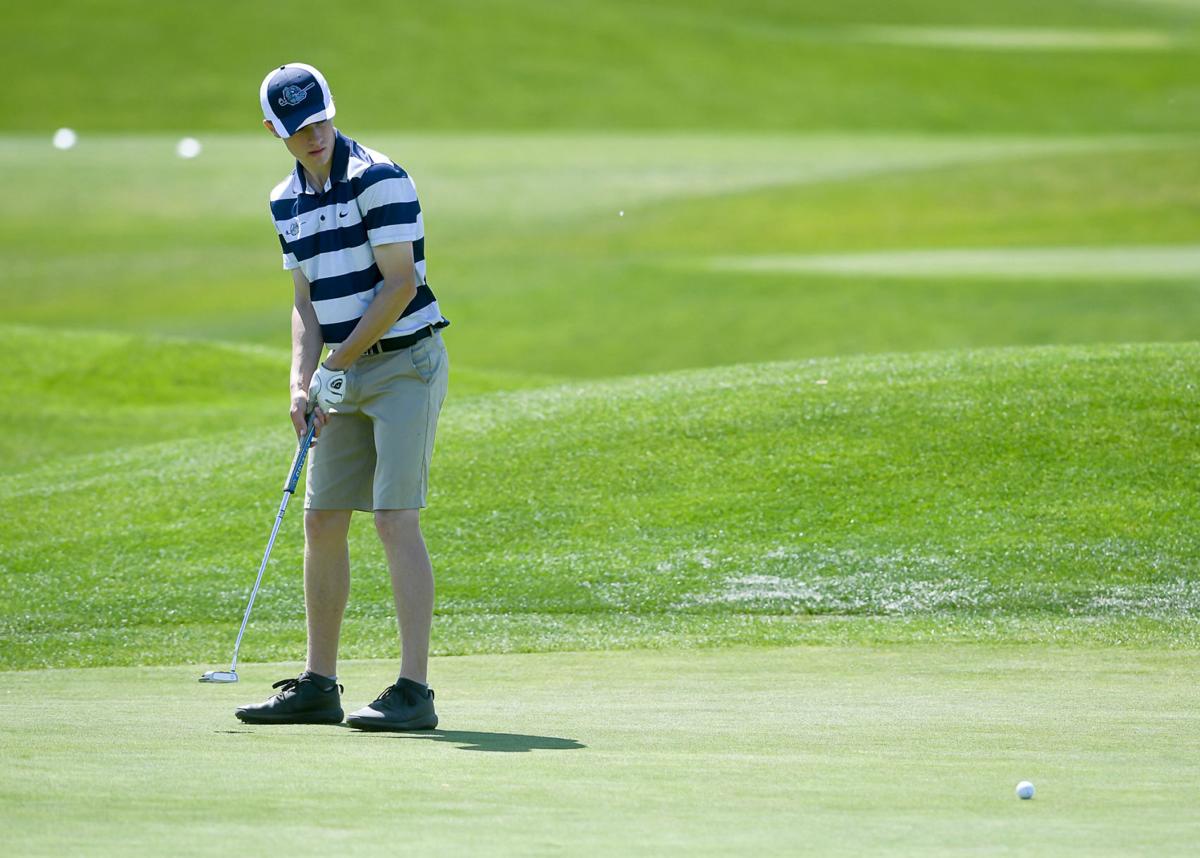 West Albany's Grant Moen on the ninth green at Trysting Tree Golf Club in Corvallis on Monday. Moen carried the momentum of an opening birdie to card a 75 to lead the Bulldogs, who captured the district title. 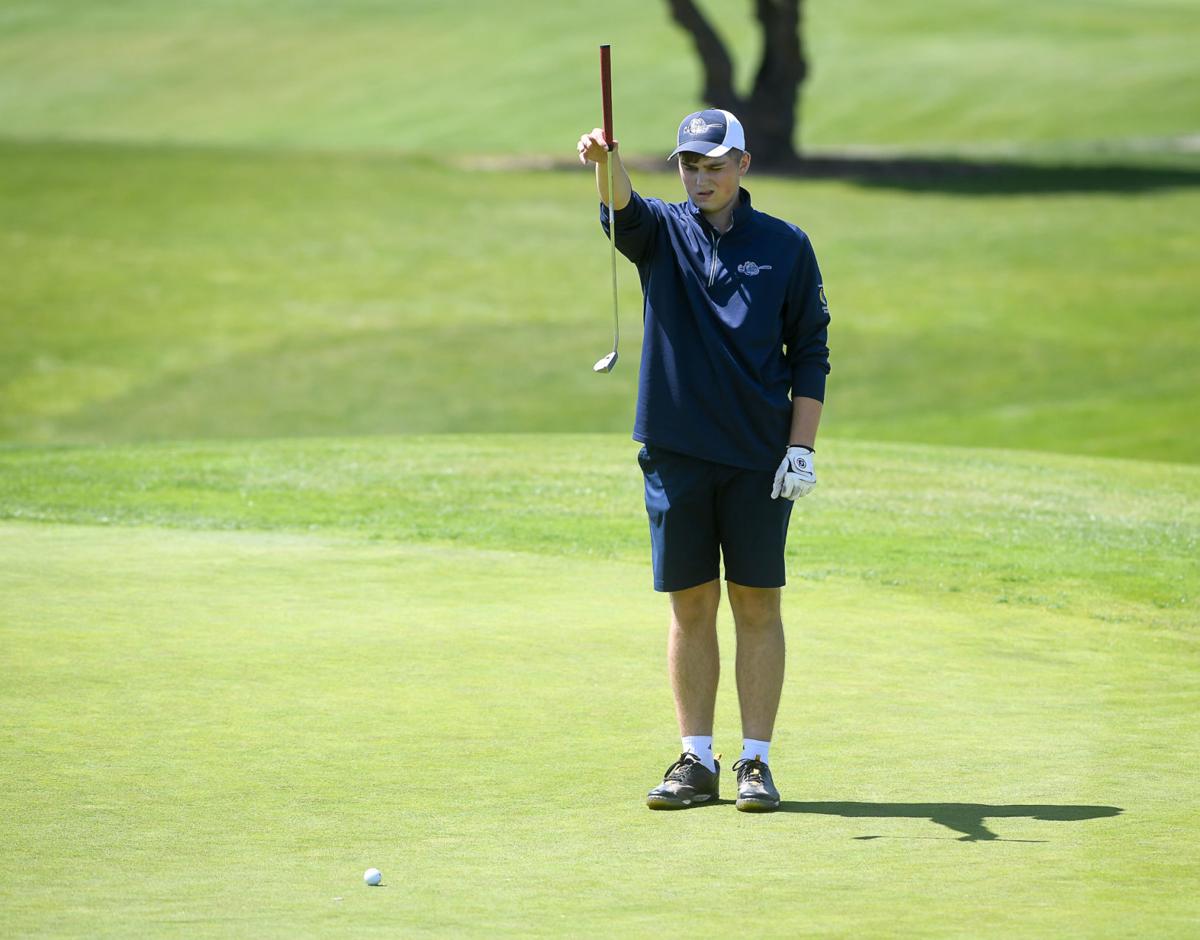 West Albany's Andrew Liles on the ninth green at Trysting Tree Golf Club in Corvallis on Monday. Liles carded a 78. 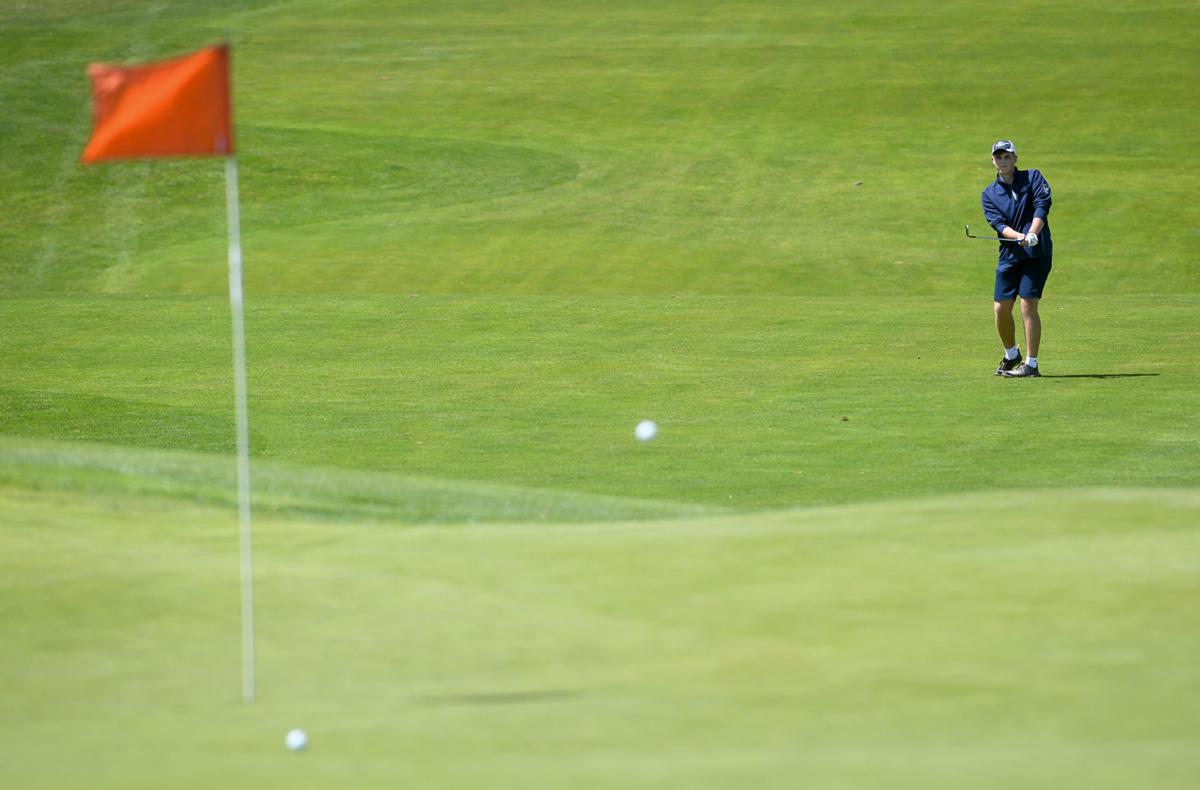 The Bulldogs didn’t quite reach that lofty mark, but they got a nice consolation prize. West captured the Mid-Willamette Conference team title at Trysting Tree Golf Club in Corvallis, finishing with a 318.

“We knew coming in our greatest team strength is depth,” West coach Matt Boase said. “Just from top to bottom, our team is so talented that any of the guys can go under par on any given round. That’s so comforting to the other guys. They know they have four other guys out there who are really good golfers.”

West has been one of the more well-rounded teams in the state all season and had hoped that a sub-300 day would be within reach Monday. A constant, swirling wind made that a tough task. But the Bulldogs still captured a title, finishing two strokes ahead of runner-up McNary.

The Bulldogs were paced by Grant Moen, who finished with a 75 after teeing off with the fourth group. Andrew Liles (78), Trenton Crow (82) and Brock Nelson (83) rounded out the scoring for West.

For a group that hasn’t had a consistent No. 1 golfer this spring, Monday’s team showing was illustrative of how the Bulldogs have played all season.

“We’ve all led the team at one point during the season,” Moen said. “That’s been a really nice thing knowing that any day, anyone can step up and have the best score. That’s kind of why we wanted to shoot under 300, to see if we could put it all together in one day.”

Moen, who has committed to Linfield College, said Monday was the first time this season he has finished with a team-best score. He hit a 20-foot birdie putt on his first hole and never looked back.

“I had a tough round early last week and got a birdie during it that kind of got me going,” Moen said. “Since then, really, I’ve been hitting it well. Hitting drivers straight. When you don’t have to worry about what you’re doing off the tee, it makes it a lot easier.”

West’s fifth golfer, Nick Anderson, missed the tournament because he was quarantining due to COVID concerns. That left the Bulldogs with an even more narrow margin for error than usual.

They kept their composure, though, and turned in another stellar team showing in a year that has been filled with them.

Like all other high school sports in Oregon, the pandemic drastically altered this year’s high school golf postseason. Normally the district tournament would take place over two days, instead of this year’s single-day format.

Also, the top individuals and teams won’t advance to a traditional state tournament like they would in a typical year. Instead, the Bulldogs and a handful of other teams from the district will play in a tournament next week that isn’t sanctioned by OSAA, but is intended to pit the top 5A teams against each other.

“That became our season goal — to do as well as we possibly could there and see if we’re among those top couple of teams and can finish well there,” Boase said.

Corvallis might have been in the mix for a district title Monday if its top golfer, Cole Rueck, had been competing. Rueck, however, had committed to play in Monday’s U.S. Open Qualifier at the Willamette Valley Country Club.

Even without Rueck, the Spartans still put up a strong team showing, placing third with a 340. Zach Montage and Jaxon Wallis each finished with scores of 82, and Vance John and Henry Gold each carded an 88. Tyler Thompson had an 89.

John Maakaron of SI All Lions reviews the Detroit Lions 2021 NFL draft class and the positive reviews of the national media.

West Albany's Grant Moen on the ninth green at Trysting Tree Golf Club in Corvallis on Monday. Moen carried the momentum of an opening birdie to card a 75 to lead the Bulldogs, who captured the district title.

West Albany's Andrew Liles on the ninth green at Trysting Tree Golf Club in Corvallis on Monday. Liles carded a 78.