Champions of the decade: Unlikely payback gives West Albany football the 2013 5A state title
Share this
{{featured_button_text}}
1 of 7 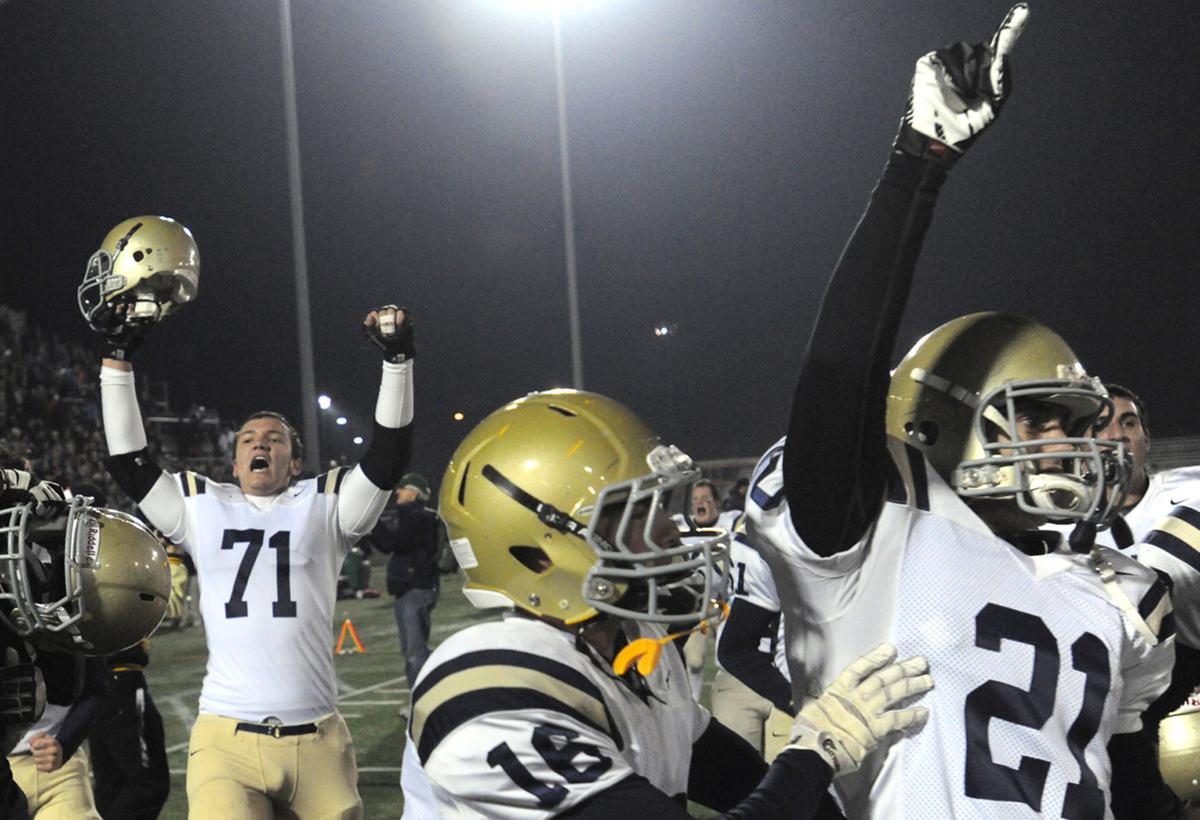 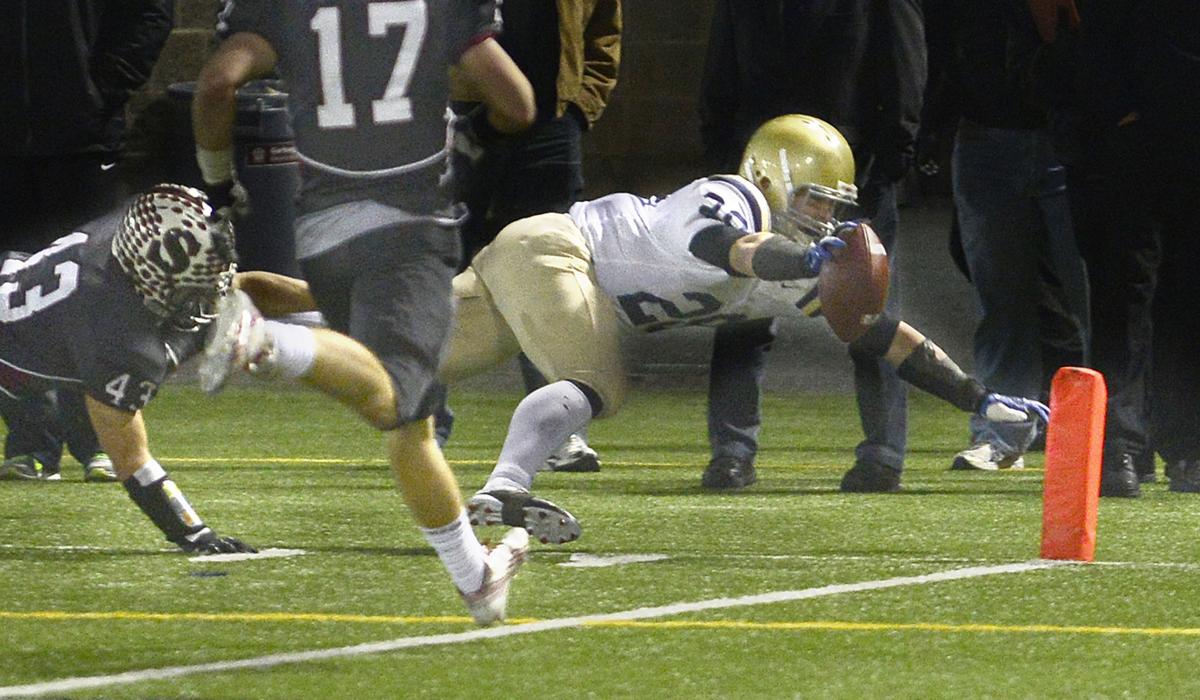 West Albany's Jake LaCoste dives towards the pylon to tie the Bulldogs' state championship game against Sherwood. West won with the extra point. 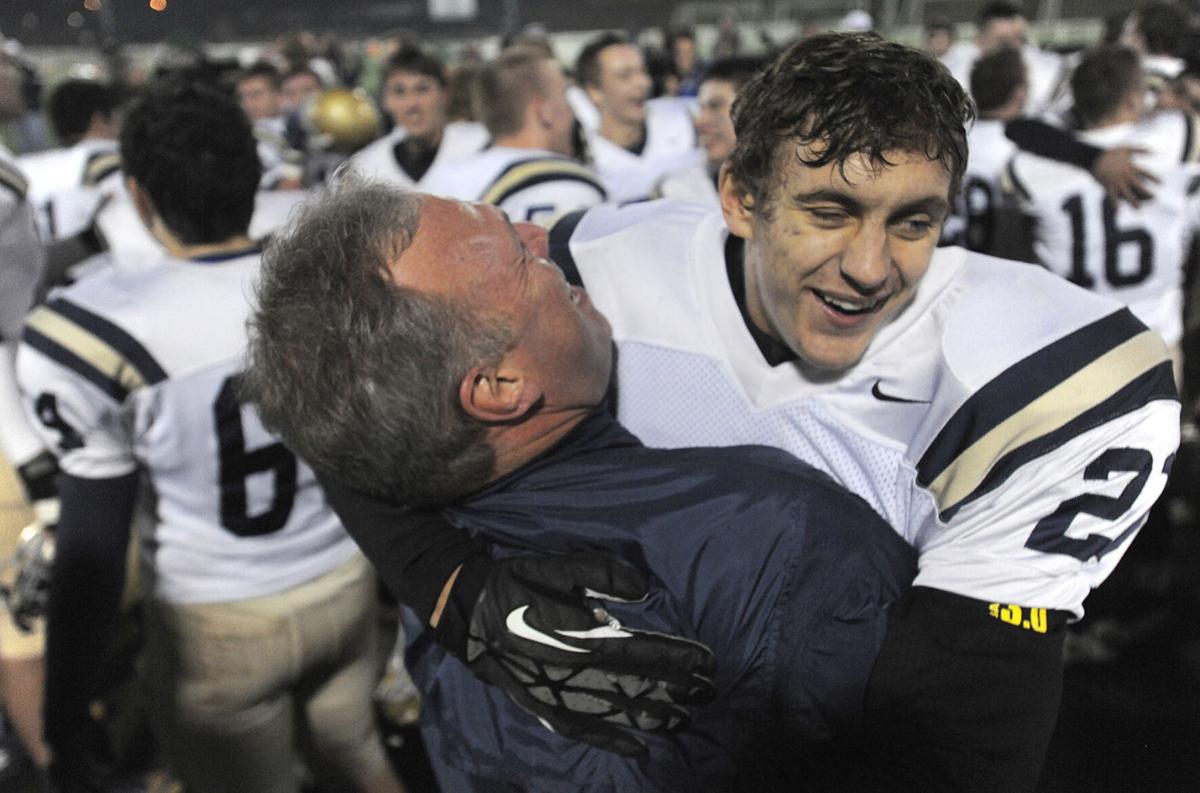 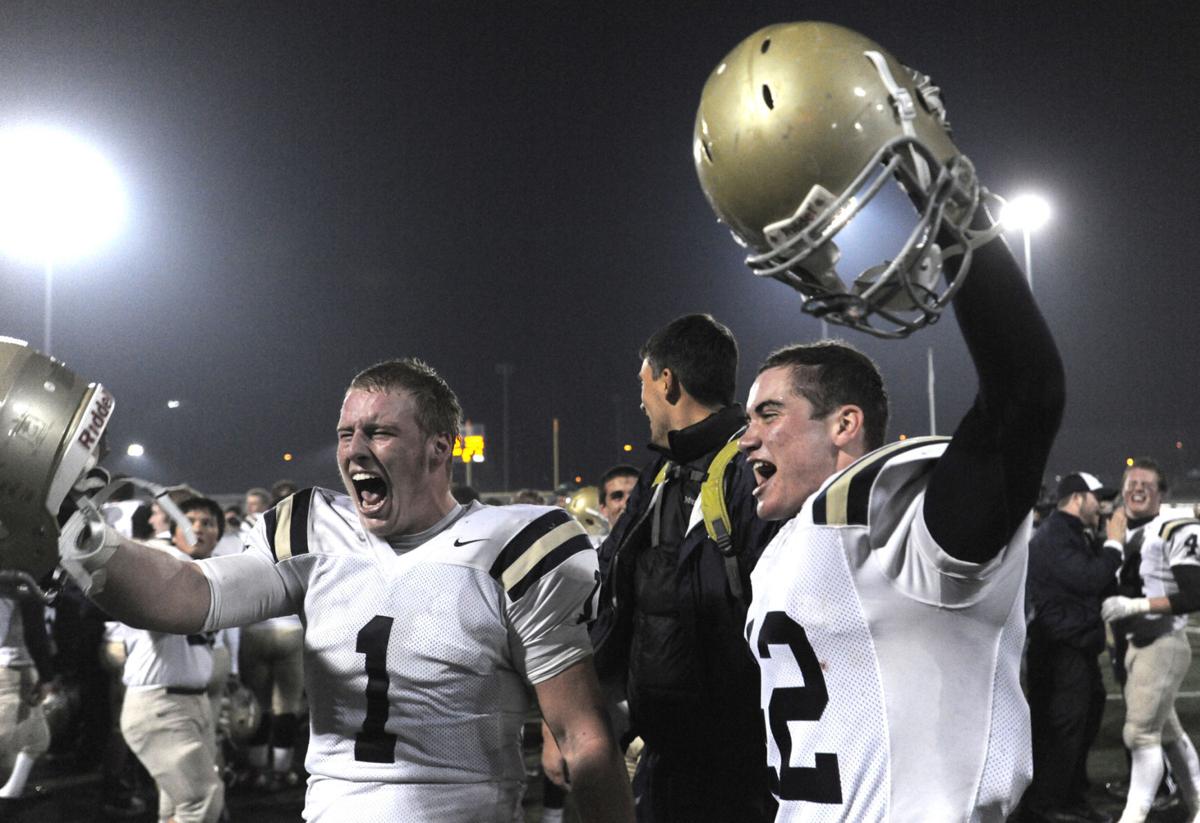 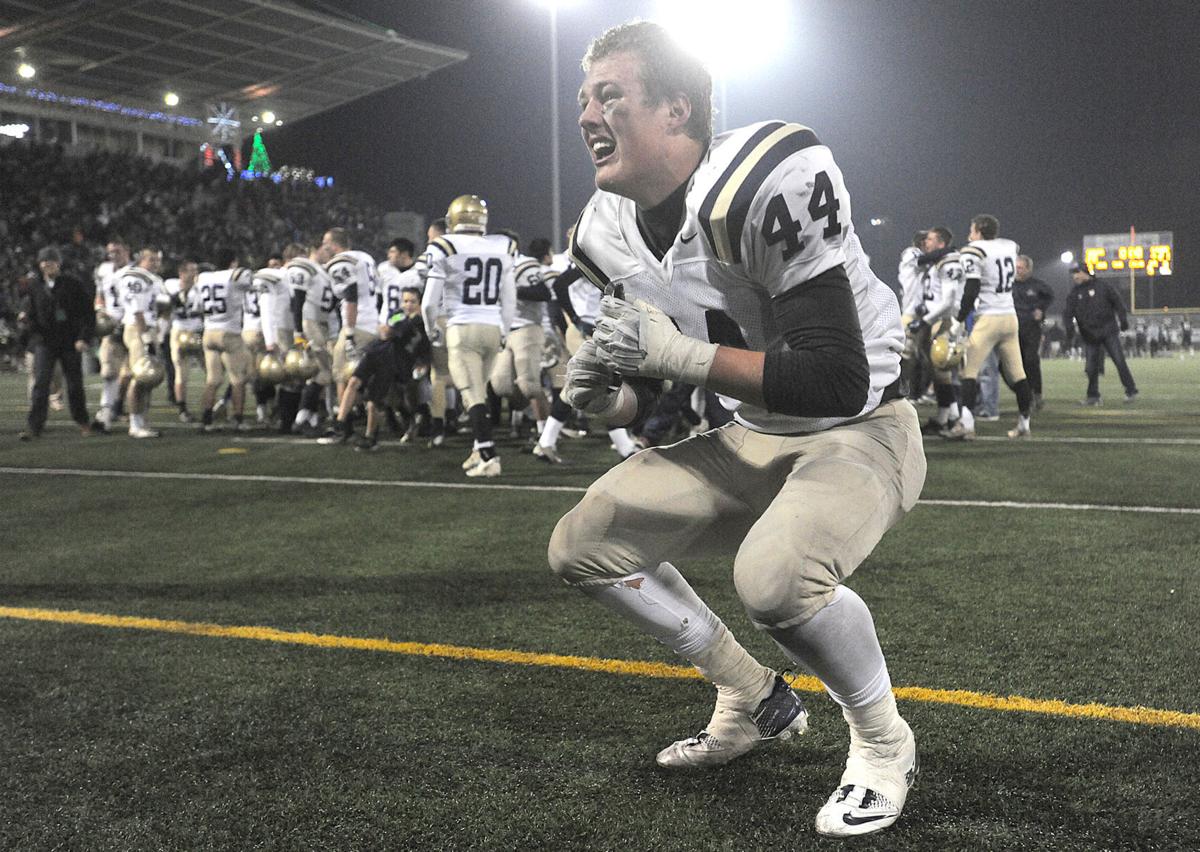 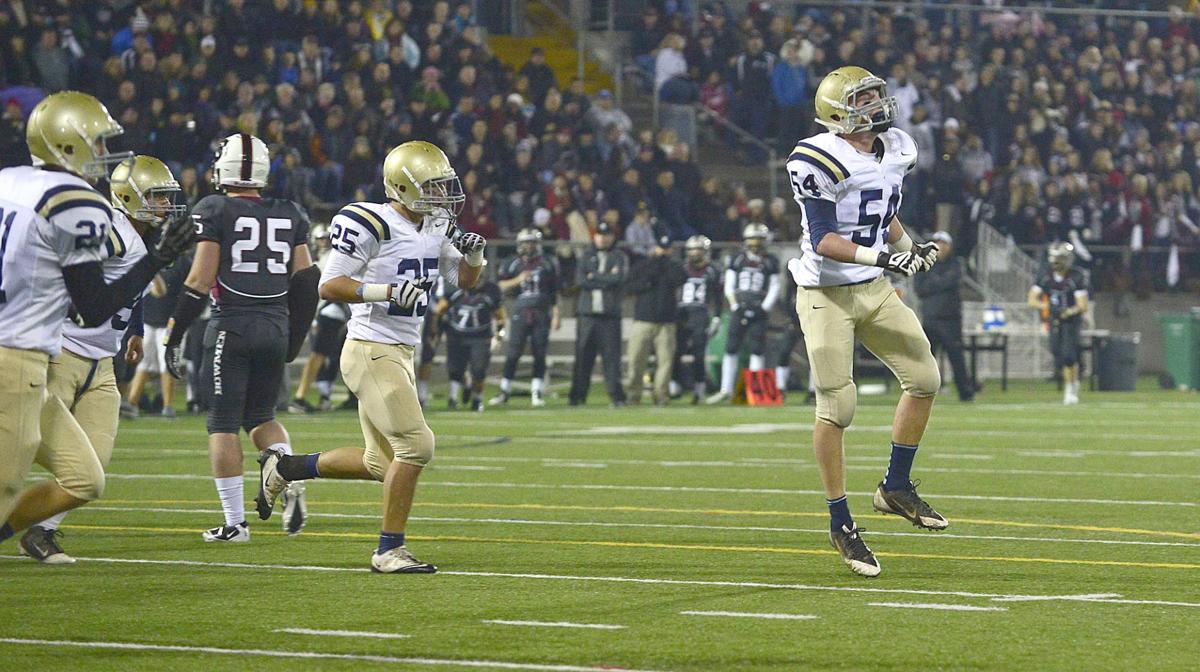 The Bulldogs had the ball in overtime with a chance to win the 5A football championship against Sherwood, a team that completely dominated West 48-0 in an early season game almost three months earlier.

Down six points after Matt Soot blocked an extra-point attempt, the Bulldogs pulled off the monumental upset.

Jake LaCoste ran for an 11-yard touchdown on a misdirection toss play and Matt Wiest kicked the go-ahead point for a stunning 21-20 victory at Hillsboro Stadium. It was Sherwood’s first loss of the season, and both teams finished 12-1.

“There weren’t very many people that gave us a chance, but I knew we had a chance,” West coach Randy Nyquist said. “If we get into a situation like this and you give me my kids and my coaches … all I know is there are two teams left and you have a chance.”

Soot, a senior lineman, had a big game. With the score tied and about two minutes left in regulation, he stripped Sherwood rusher Keegan Lawrence deep in Bulldogs territory, and the ball was recovered by West’s JT Valenzuela at the 9.

Sherwood took the ball first in overtime and went ahead on Lawrence’s 15-yard touchdown. But the score remained 20-14 when Soot got his hand on Martin Layna’s kick.

On second down from the 11, quarterback Cody Lahoda took the snap, faked to the right and pitched the ball to LaCoste heading left. LaCoste got to the edge and hit the pylon in the front corner of the end zone to tie the game.

It was the same play, run out of a different formation and with Valenzuela in motion, that resulted in a LaCoste 53-yard touchdown run a week earlier against Silverton.

“We haven’t run that all year long; that was something I had up my sleeve,” Nyquist said. “We ran that play off option last week and we ran it off a fly sweep this week. Same result. You get Jake one-on-one with somebody on the edge, and he’s usually going to win.”

It was the final game after 15 seasons coaching the Bulldogs for Nyquist, a West alum who left to teach and coach at Oregon City High and is now at Stayton High, where he’s been the head football coach for three years. He won three state titles in all at West Albany.

It was also West Albany’s last year in the 5A classification before a four-year move to the 6A Greater Valley Conference. It was also Sherwood’s final year in 5A, and that school remains in 6A.

West Albany started the season with a 17-7 home win against Marist before traveling to Sherwood, the defending 5A champion. It was 14-0 after one quarter and 28-0 at halftime as the Bowmen rolled to a 48-0 victory.

“Overall, they just had the edge over us the whole game,” LaCoste said before the rematch. “They had a few big plays where they scored on, but mainly they just had us, and it was early for us. I think we have worked hard since then and we are a lot better now.”

The Bulldogs, who had scored just 10 combined offensive points in their first two contests, followed that game with a 31-21 win at Crescent Valley to open Mid-Willamette Conference play. Twenty-four of those points came on offense, including three touchdown runs by LaCoste, who finished with 278 rushing yards.

West then held its next five opponents to eight points or fewer, though there were tight games against eventual playoff foes Silverton (13-0) and Dallas (14-7) in that stretch.

The Bulldogs found their offense in the second half of the season, averaging 54 points in four games heading into a semifinal matchup with Silverton. LaCoste ran for 203 yards, 53 of those coming on a second-quarter score. West intercepted Foxes quarterback Cole Chandler twice and blocked a field goal attempt in Silverton’s only trip to the red zone in a 17-0 win at Hillsboro Stadium.

This is the final installment of our series looking back at some of the best state championship teams in the mid-valley over the past decade. If you missed any of them, you can read them all by viewing the online version of this story at gazettetimes.com or democratherald.com.

When Jake Ehlers let out a “Yeah” so loud that is could be heard crystal clear in the top of the lower bowl of Matthew Knight Arena, a magical…

Champions of the decade: A decade of dominance for Santiam Christian volleyball

It was a dominant decade for Santiam Christian volleyball, with 3A state championships at each end of the 10-year span and four more in between.

Central Linn High dominated the 2A boys track and field division between 2011 and 2015, showcasing its individual talent and depth to claim fi…

Champions of the decade: Raiders make their mark in 5A girls swimming

West Albany High was just a few points from a 5A volleyball state title in 2011, jumping ahead 2-0 in a best-of-five championship match with S…

Champions of the decade: Story series highlights state championship teams of past 10 years

Oregon State had some built-in motivation defensively after a rough stretch of games and passed the test.

West Albany's Jake LaCoste dives towards the pylon to tie the Bulldogs' state championship game against Sherwood. West won with the extra point.