Champions of the decade: Story series highlights state championship teams of past 10 years
Share this
{{featured_button_text}}
1 of 2 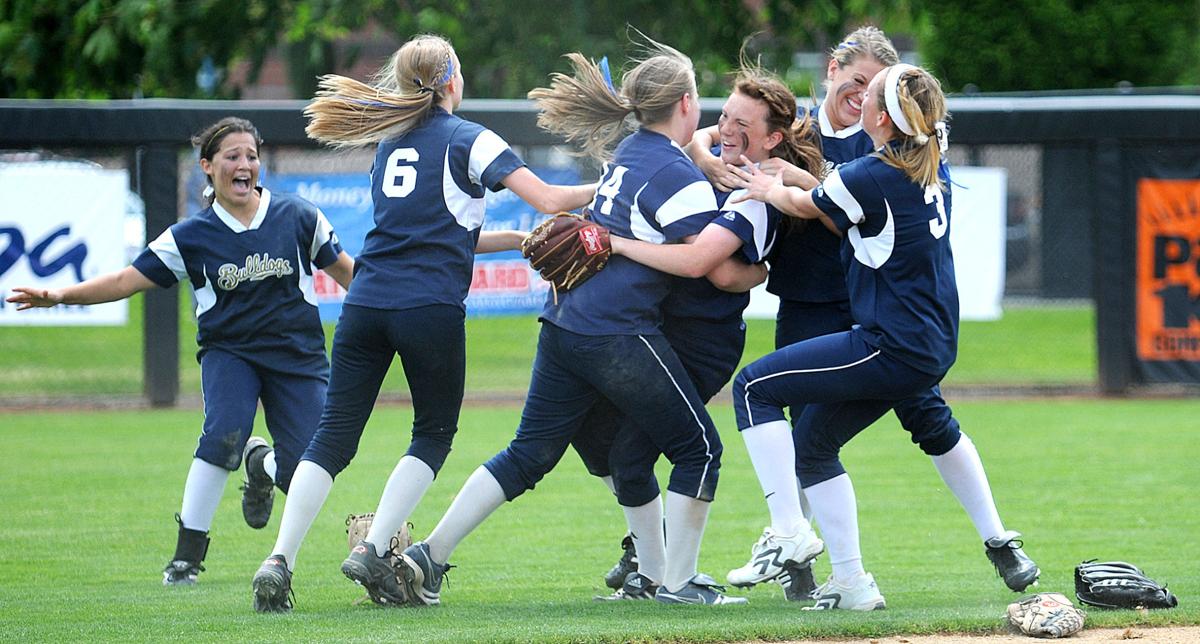 West Albany softball players celebrate their 7-6 win over Pendleton to capture the 2011 5A state title at the OSU Softball Complex. The Bulldogs, the third seed in their half of the bracket, knocked off No. 2 Hermiston by a 7-6 score in the quarterfinals before stunning No. 1 seed Silverton 4-1 in the semifinals. 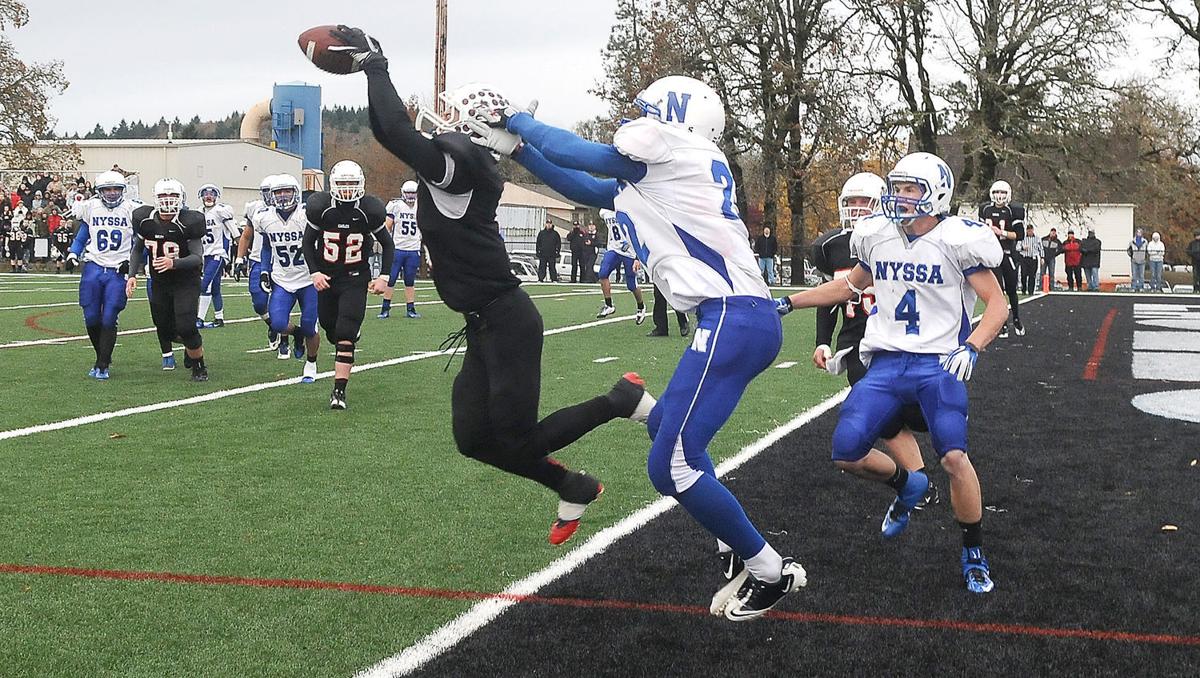 Santiam Christian's Alex Hovelsrud picks off a pass at the end zone intended for Nyssa's Reb McDaniel to seal the Eagles victory with seconds left in the 3A quarterfinals in 2011. The Eagles went on to win the state title against Dayton and finish 13-1.

The 14 schools in the Democrat-Herald and Gazette-Times coverage area combined for 63 OSAA state team championships in the decade ending with the 2019-20 school year.

There were so many highlights that we decided to take a look back at some of the dominating performances, shockers and incredible team efforts that resulted in those athletes holding up a new blue trophy when it was all done.

Over the next several weeks we’ll put the spotlight on some of those teams with a series of stories. We didn’t want to leave anyone out, so here’s a quick glance at all 63 state championships won by area teams separated by sport.

Philomath book-ended the decade with 4A state titles in 2010 and last fall in 2019, defeating league rival Sisters by five points.

Behind an individual title from sophomore Madeline Nason in 2019, Corvallis edged 2018 champion Hood River Valley by four points (and Wilsonville by six) to claim the 5A championship.

With its second straight 2A state championship under coach Kyle Braa in 2010, Scio provided the first of seven total state titles among six schools in our coverage area during the decade.

Philomath won the 4A title in 2012. Corvallis, after losing the 5A championship to league foe Woodburn in overtime in 2017, came back to win it the next fall, getting past La Salle Prep in an overtime match.

Crescent Valley is the defending 5A state champion after wins in 2018 and 2019 with coach Blake Leamy. The first came in overtime versus Churchill and the second on penalty kicks against Wilsonville.

It was a busy and successful decade for Santiam Christian, which won six 3A state titles, including those in 2018 and 2019 under coach Kelli Fitzpatrick. Kim McLain was the Eagles’ coach for the first four, in 2010, 2012, 2013 and 2014 before leaving to become the head coach at Corban University.

West Albany lost a five-setter to Summit in the 2011 5A state championship match before coming back to win the title the next two seasons. Corvallis dominated in 2018 to win the 5A title that season.

The area claimed five boys basketball titles in the decade.

Monroe completed an undefeated season under coach Tony Parker in 2017 with a win in the 2A state title game against Western Mennonite. The Dragons reached the championship game again the following year, falling to Kennedy.

Sweet Home won the 4A/3A/2A/1A title in 2017 with coach Doug Peargin. Peargin has four championship and four runner-up finishes with his boys team since 2000.

Corvallis, led by coach Judy Storie, dominated the 5A division for the 2011 title.

Crescent Valley and Sweet Home used talent-heavy lineups to each win their respective divisions three times during the decade.

Crescent Valley and coach Chad Lamer have the foundation for a long 5A title run after winning state in 2019 and 2020. Nine of the Raiders’ 10 state finalists from this past winter are slated to return. CV won five individual titles in 2019 and nine in 2020.

Sweet Home was first in the 4A division in 2017. The Huskies, under head coach Steve Thorpe, finished fourth or better to claim a team trophy in eight of the 10 years of the decade, including three runner-up finishes.

Pinch-hitter Zach Gwillim’s walk-off home run gave Monroe a 2-1 win against Weston-McEwen for the 2014 2A state championship. The Dragons got back to the title game the next year, losing to undefeated Knappa.

Santiam Christian allowed just three runs in four playoff games in 2015, capping its 3A postseason run with a 3-0 victory versus Glide.

Corvallis won in 2011, West Albany in 2013 and Crescent Valley in 2019. The MWC has won the boys team title seven times since the introduction of the 5A classification in the 2006-07 school year.

West Albany overcame a 5-3 deficit after three innings and took advantage of six Pendleton errors for a 7-6 win in the 2014 5A championship game.

Crescent Valley tied Marist in 2013 and Summit in 2014 for a pair of 5A state titles with coach Chris Herb. The Raiders finished second three other times in the decade.

Whenever Corvallis gets back to the court, the Spartans will be seeking a sixth consecutive 5A state championship.

Corvallis and Ashland tied for the 2015 title before the Spartans won it outright the next four seasons under coach Donna Keim.

In 2018, Corvallis scored 30 points, the highest state tournament score in any division since 2007. Anna Kern defeated sister Tessa Kern for the singles title while Sarah Forester and Olivia McGough were the doubles champions.

Central Linn was on top of the 2A classifications for five straight seasons, winning each year starting in 2011.

DiSean Hernandez won six individual titles and Mark LaCoste five to lead the Cobras during that stretch, with each covering three different events.

Central Linn won the 4x100 relay all five years. Josue Avilez and Tate Barnes were both on four of those relays and LaCoste three.

East Linn Christian won the 2A championship in 2017 behind record-setting efforts by sprinter Mackenzie Wilson. Monroe did the same in that classification a year later with multi-event star Kyndal Martin leading the way.

West Albany softball players celebrate their 7-6 win over Pendleton to capture the 2011 5A state title at the OSU Softball Complex. The Bulldogs, the third seed in their half of the bracket, knocked off No. 2 Hermiston by a 7-6 score in the quarterfinals before stunning No. 1 seed Silverton 4-1 in the semifinals.

Santiam Christian's Alex Hovelsrud picks off a pass at the end zone intended for Nyssa's Reb McDaniel to seal the Eagles victory with seconds left in the 3A quarterfinals in 2011. The Eagles went on to win the state title against Dayton and finish 13-1.