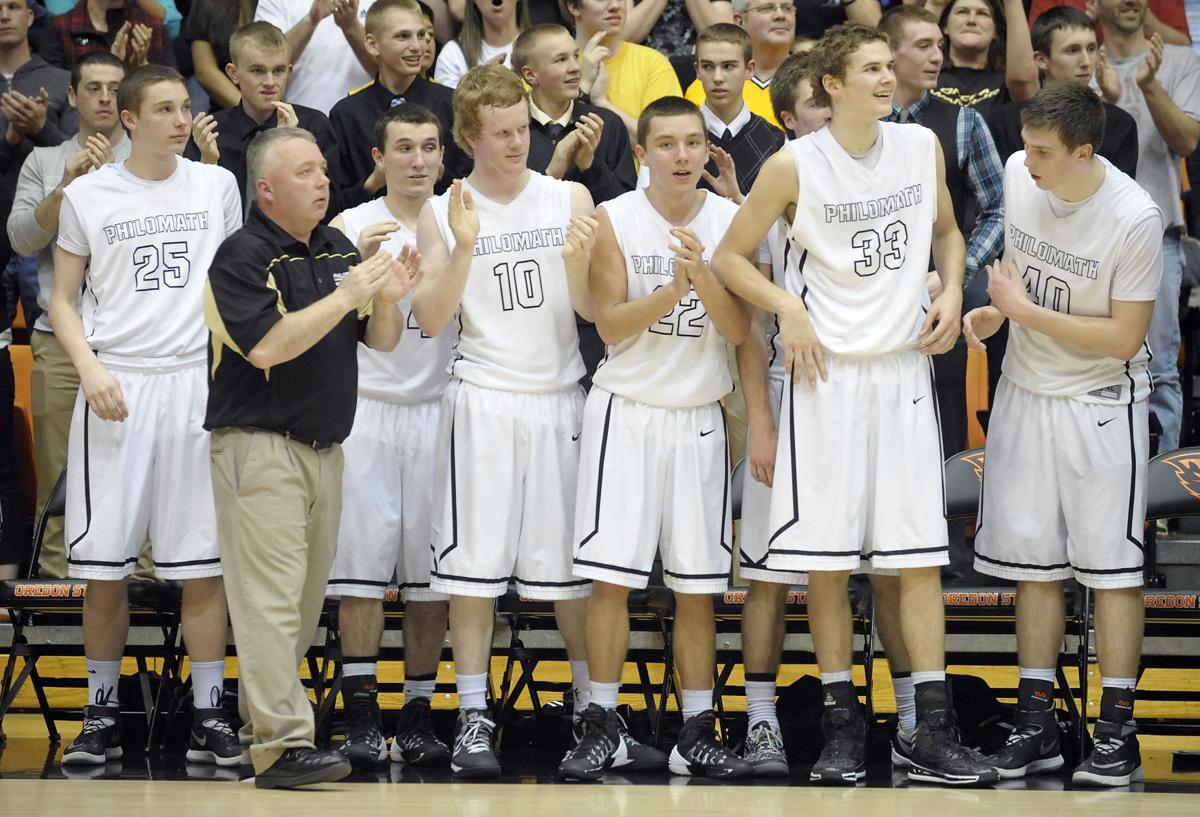 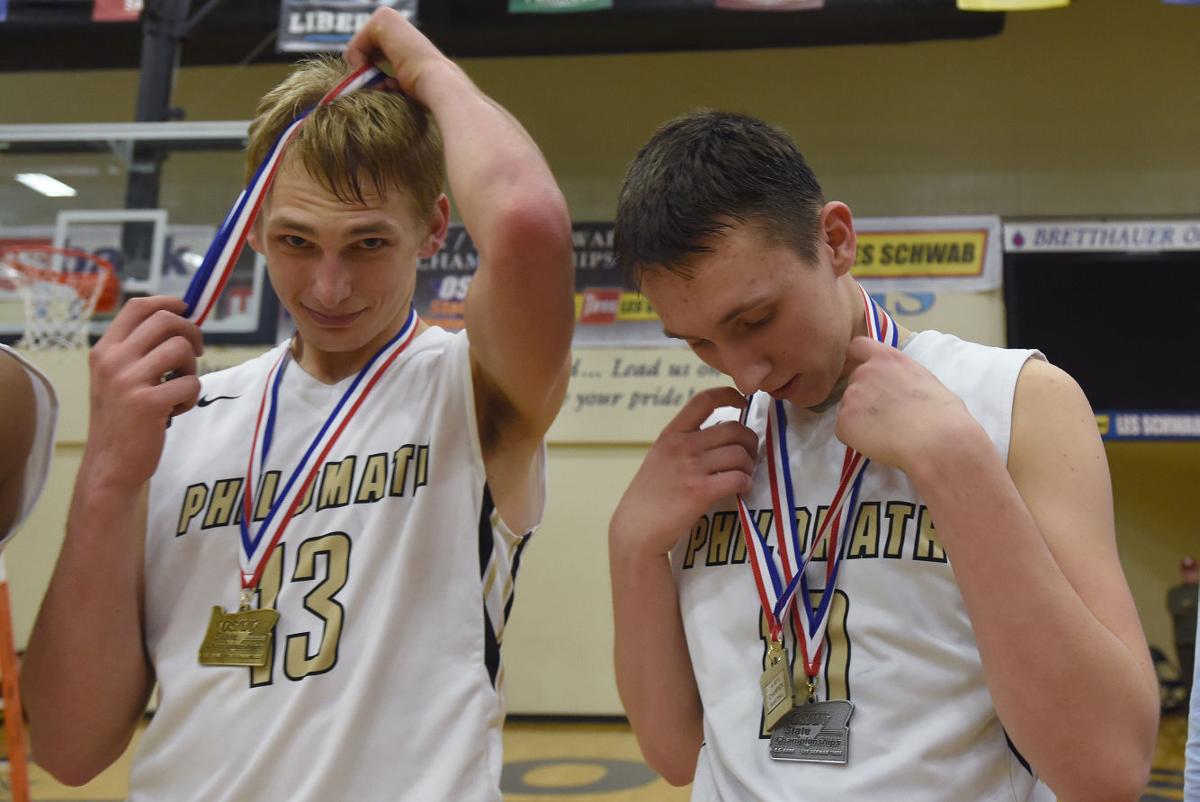 Philomath's Cal Steve (13) and Riley Davis (10) put on their medals after winning the 2016 OSAA 4A championship against Seaside at Liberty High School. 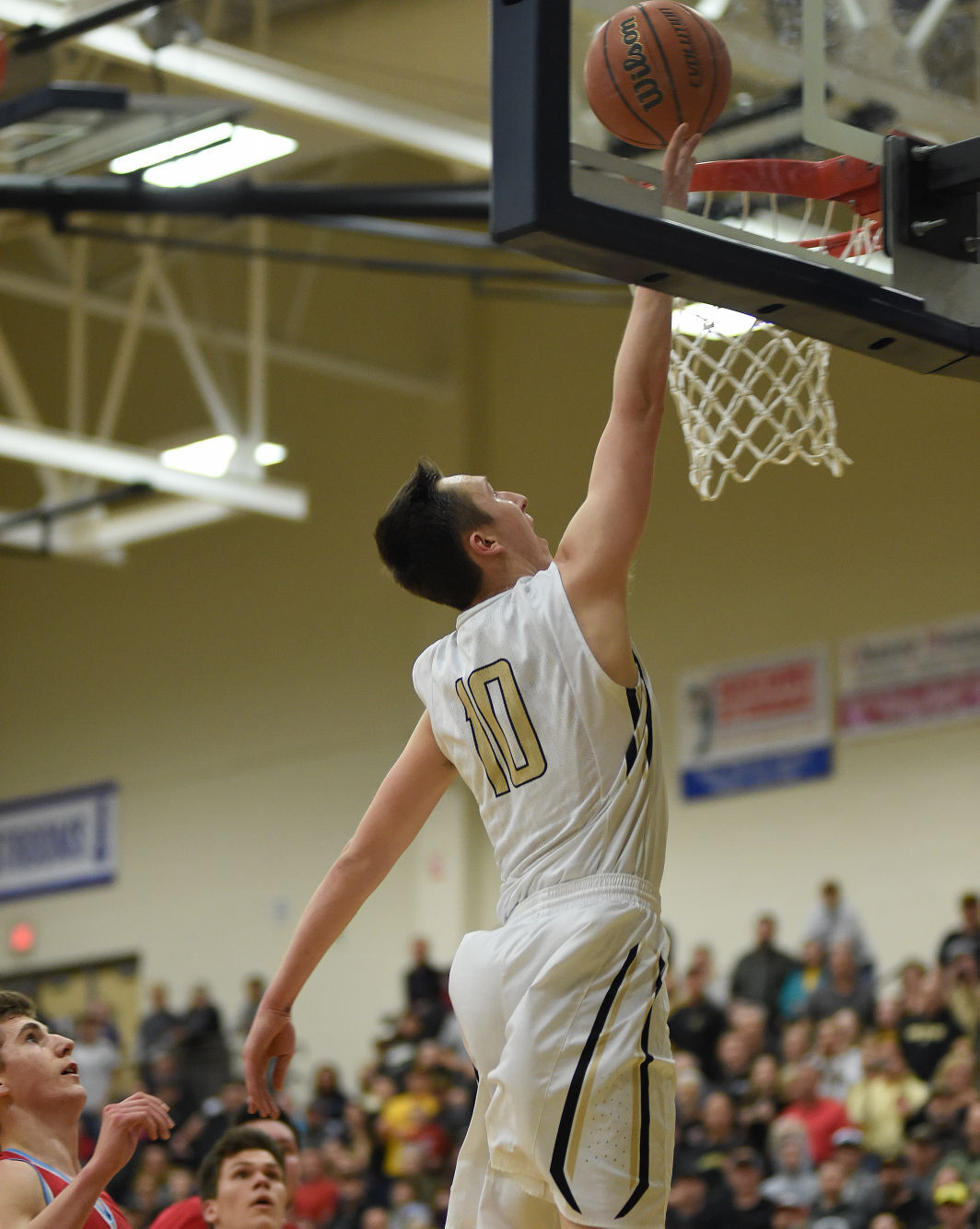 Philomath's Riley Davis scores against Seaside during the second half of  Philomath's 55-45 win in the state title game. 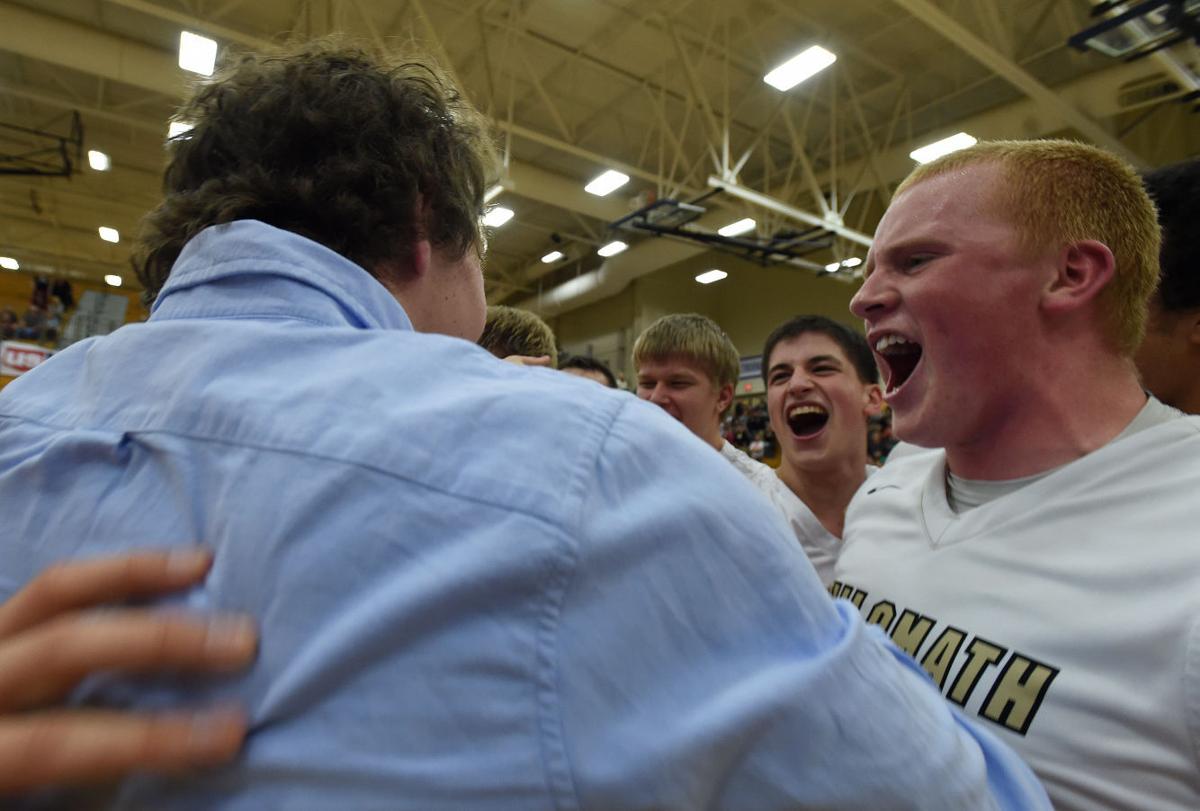 Philomath players celebrate after winning the 2016 OSAA 4A championship against Seaside.

Two seasoned teams — disappointed with fifth-place finishes the year before — showed they were up to the task, as the Warriors claimed state championships in 2014 and 2016 under head coach Blake Ecker.

The 2014 championship dreams nearly faded in the tournament quarterfinals.

Then came a 61-52 semifinal win against La Grande before Ben DeSaulnier’s big game pushed Philomath past La Salle 48-39 in the championship game.

“They’ve worked so hard this season. They deserve it so much,” Ecker said.

It was the program’s second state title. The first came in 2002 with Dave Garvin as coach.

DeSaulnier, a senior guard and unanimous selection as state player of the year and first team all-state tournament, scored 23 of his 30 points in the first half. He also added 11 rebounds and four steals.

“I just kind of went with it. I saw a lot of open opportunities in the beginning of the game and we got a lot of fast-break opportunities,” said DeSaulnier, who scored a school-record 53 in just three quarters of a regular-season game against Stayton earlier in the season. “My guys got me the ball in position where I would be successful. I think that was the difference.”

Teammate Brodie Marchant, a junior, joined him on the all-tournament first team. Junior Koeby Bennett made the second team.

Behind DeSaulnier, Philomath led by 14 at halftime and 13 after three quarters. The Warriors pushed it to 17 in the fourth and the Falcons got no closer than seven.

The state championship was a rematch of a game more than two months earlier. The Warriors defeated the Falcons 45-32 at the Sisters tournament. It also matched the two teams in the state third-place game a year earlier won by La Salle by two points.

DeSaulnier continued his career at Southern Oregon University, where he became the No. 2 scorer in program history.

In 2016, none of the Warriors’ three state playoff games leading into the championship final were decided by fewer 10 points.

Philomath defeated Seaside 55-45 for the title, but it was much closer than that.

The Warriors were up 11 at halftime and still claimed that margin with five minutes left in the game. But a 9-0 Seagulls run had it down to two with two minutes remaining.

The veteran Philomath team responded with five straight points of its own, including two Riley Davis free throws with 47 seconds left to push the advantage back to seven. Seaside got no closer than five from there.

The Warriors (25-3) made eight of their last 12 foul shots in the last 77 seconds, including five of the final six in the last 31 ticks, to pull it out. Austin Gerding, a senior guard, made 5 of 6 himself.

“I got a little scared, I got a lot scared, but obviously we put in the free throws down the stretch which did it for us,” Gerding said. “That’s something we struggled with all year but we were able to put them in.”

Added Davis: “I got a little scared when they got it down to five, four. But we were composed and kept it together and made some free throws at the end.”

With no high school sports on tap, the sports staff of the Albany Democrat-Herald and Corvallis Gazette-Times is taking a look back at some of the top high school teams to win state championships over the past 10 school years (2010-2020). This feature will run each Friday into December.

Champions of the decade: Story series highlights state championship teams of past 10 years

Philomath's Cal Steve (13) and Riley Davis (10) put on their medals after winning the 2016 OSAA 4A championship against Seaside at Liberty High School.

Philomath's Riley Davis scores against Seaside during the second half of  Philomath's 55-45 win in the state title game.

Philomath players celebrate after winning the 2016 OSAA 4A championship against Seaside.