Area schools affected by cancellation of state tournaments
Share this
× 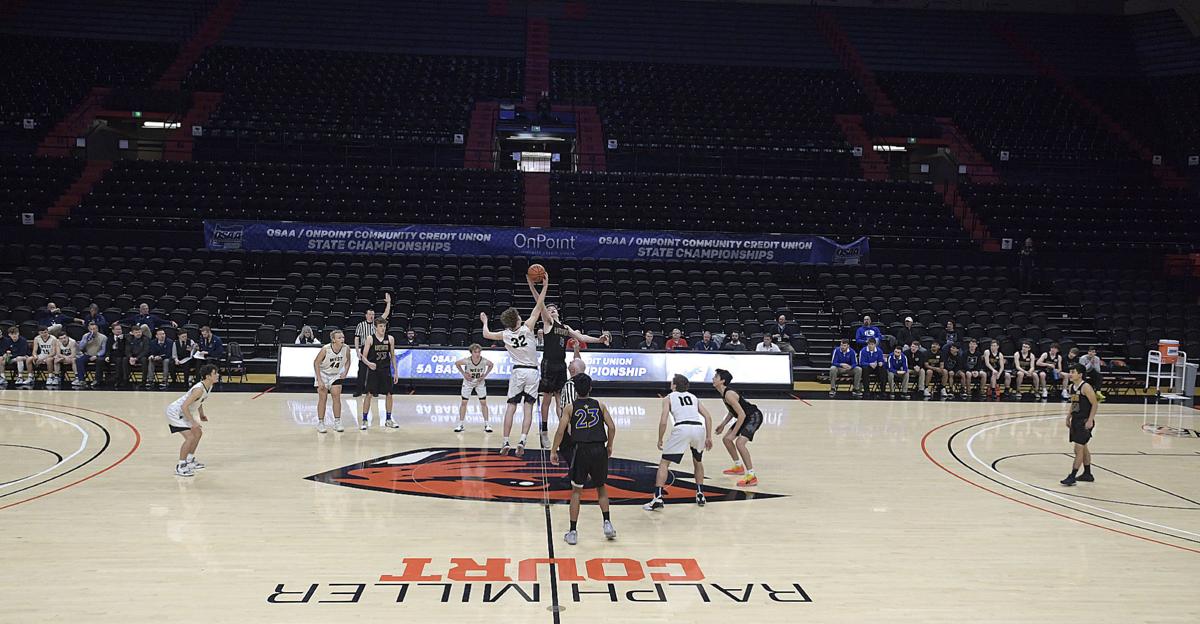 West Albany plays Crook County in an empty Gill Coliseum after the OSAA banned fans due to concerns about the COVID-19. The rest of the games in Corvallis, site of the 5A tournament, were canceled. Later the 4A and 6A tournaments were also canceled. 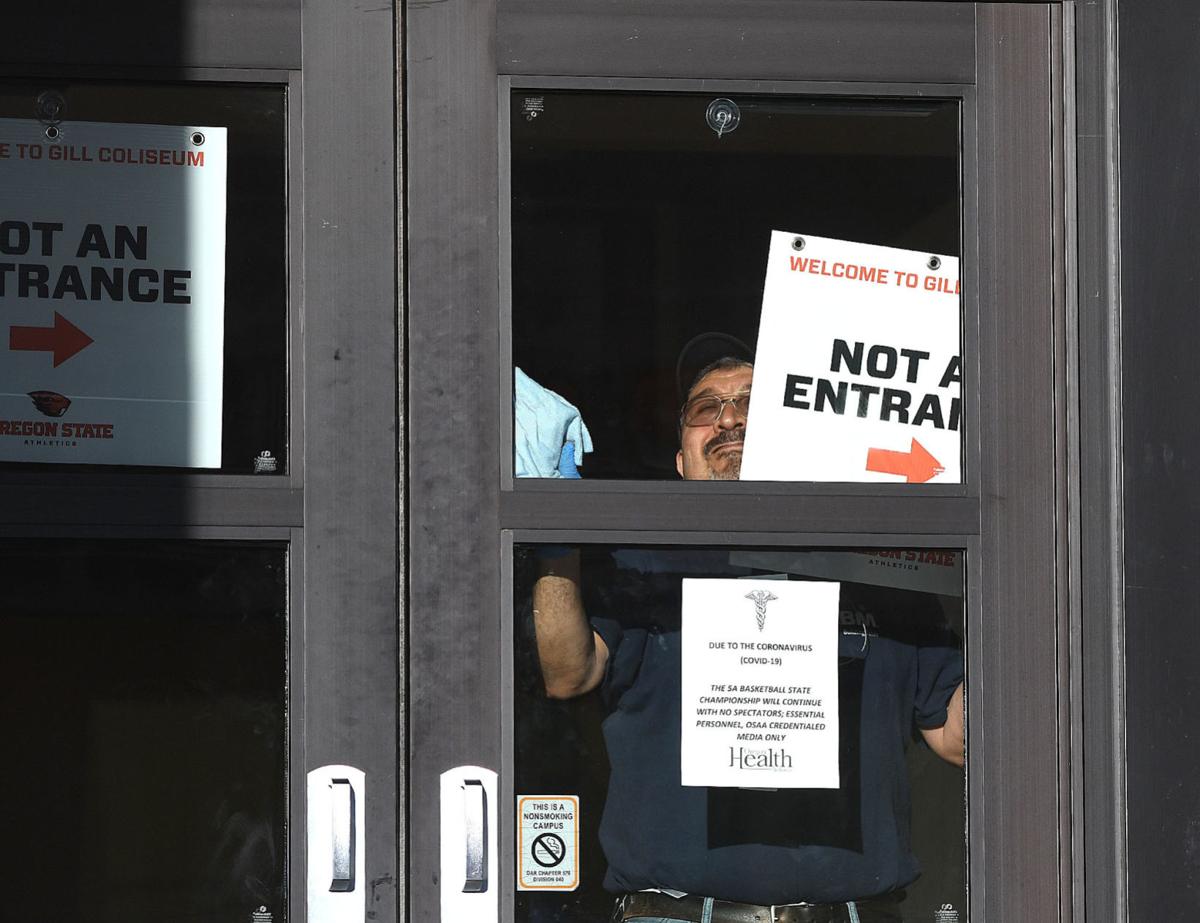 A worker at OSU cleans windows of Gill Coliseum on Thursday morning. OSAA banned fans due to concerns about the COVID-19 virus, then canceled the tournament after the completion of the West Albany vs Cook County contest.

But before the players could set foot on the court, the chance to do so was taken out of their hands.

The RedHawks were due to face Willamette in the OSAA 5A consolation semifinal at 10:45 a.m., and while there was no state title on the line, a win would have extended the prep careers of South’s nine seniors by one more day.

But a half hour before the game was set to tip off, OSAA officials informed South Albany administrators there would be no more games played at Gill the rest of the week in an effort to limit the spread of the COVID-19 virus.

“It wasn’t so much the routine that I was frustrated with when we heard they postponed everything,” South coach Tim Matuszak said. “But our guys were frustrated with last night’s game and how they performed. They were really excited to get back out there this morning and redeem themselves and go fight for an opportunity to get a trophy. Having to bring them off of that high was really the disappointing thing.”

Later in the afternoon, the OSAA officially canceled all winter sport championships.

That included the Philomath girls and boys teams, who were set to play quaterfinal games at Forest Grove High later in the day. The girls were seeded No. 1 and the boys No. 2.

The Lebanon girls were going to play Churchill for fourth place Friday morning in the 5A tournament.

“As this unprecedented public health emergency continues to evolve, we believe that the responsibility to our member schools and communities regarding the health and safety of participants remains our highest priority,” OSAA Executive Director Peter Weber said in a statement.

Even before the announcement, the day had an irregular feel to it for players from all participating teams. The OSAA announced Wednesday night that the remainder of the tournament would be played behind closed doors, with no spectators allowed to enter tournament sites. Only essential personnel and media were permitted.

In a further effort to limit person-to-person contact, the RedHawks and Wolverines players were not allowed to sit courtside and watch the game that took place before theirs, like they typically would. So they sat in the underground locker rooms and waited to take the court.

“We had about five minutes before our team talk,” Matuszak said. “I ran upstairs to set up my I-Pad to film. When I got back downstairs, my (athletic director, Jason Platt) signaled me over and I thought, ‘Here we go.’ We were ready to hit the floor.”

While South’s players and coaches were being informed of the news, crosstown rival West Albany was on the court, playing its own consolation game under peculiar circumstances. The Bulldogs faced Crook County in a game that tipped off at 9 a.m. and was played with no spectators.

The pregame routine remained the same as it had all season for West, with loud music booming throughout the arena during shootaround and player introductions taking place prior to tipoff. But the families and friends of players were not allowed to watch and lend their support.

“It was really weird, I didn’t even know what to do,” West guard Koby Ruiz said. “Going out for warmups, you see nobody out there — nobody cheering for you. It’s like, what are we doing here, just scrimmaging?”

As an unintended consequence, seniors from both teams took the court knowing they could be playing their final game, and that they would be doing so without their families in attendance.

The players tried to maintain a sense of normalcy and remember how significant the game was, despite the environment in which they were playing.

“It felt kind of like a summer ball game, where there’s maybe two people’s parents there and that’s about it,” Crook County senior Jordan Graydon said.

The end result was a 72-50 win for Crook County, but the Cowboys’ excitement after the victory was short-lived. As the teams cleared the court and headed back to their respective locker rooms, event staff began to lower the baskets while the public address announcer declared that the West-Crook County game would be the last one played at the tournament site.

“(The Albany community) is who I feel the worst for, especially our senior parents,” West coach Derek Duman said. “They didn’t get to see their sons' last games. It’s out of our control, but it’s a bummer.”

After Gill was closed, Matuszak said his team intended to practice like they normally would once the school day ended. He wanted to maintain a normal routine as his team waited to find out if and where their game would be relocated.

But like so many athletes around the country, the careers of South’s seniors came to an abrupt, unceremonious end Thursday afternoon.

“Whether they cancel this thing or not, I don’t need a trophy in the trophy case to know what these seniors have done for this program and what they’ve done for me as a first-year head coach,” Matuszak said.

West Albany plays Crook County in an empty Gill Coliseum after the OSAA banned fans due to concerns about the COVID-19. The rest of the games in Corvallis, site of the 5A tournament, were canceled. Later the 4A and 6A tournaments were also canceled.

A worker at OSU cleans windows of Gill Coliseum on Thursday morning. OSAA banned fans due to concerns about the COVID-19 virus, then canceled the tournament after the completion of the West Albany vs Cook County contest.