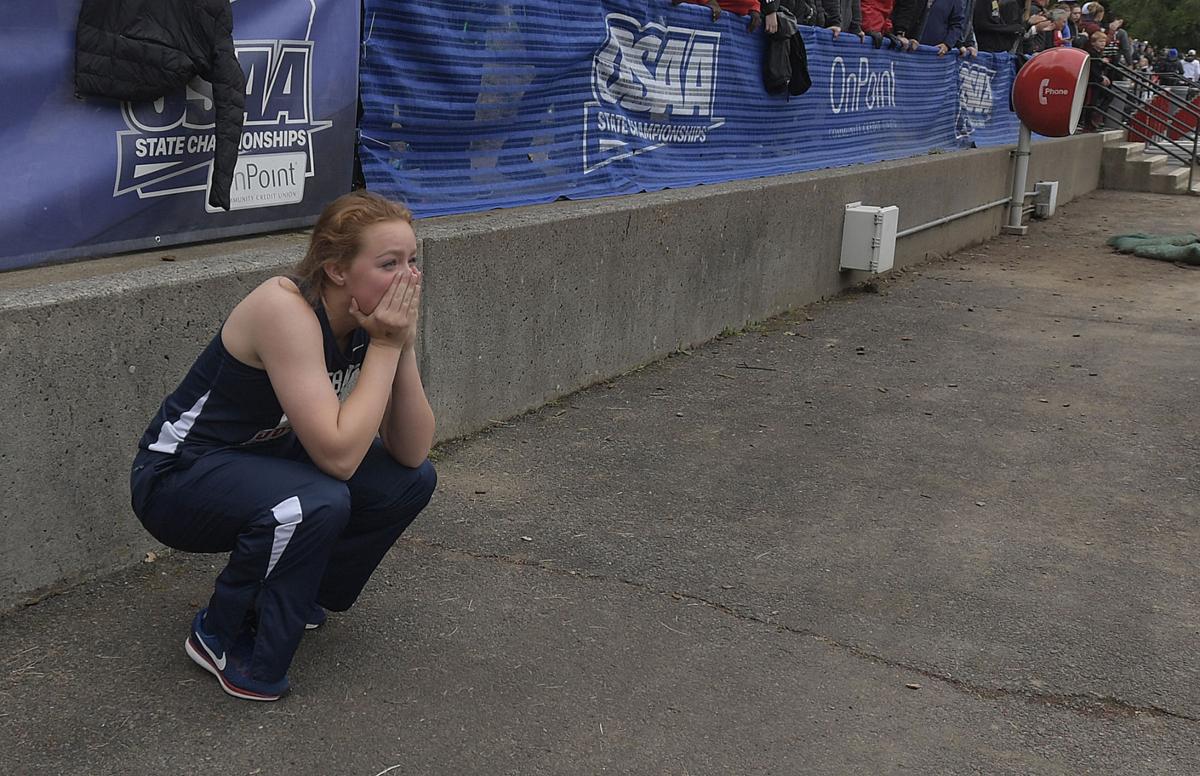 West Albany's Emily Stefan, seen here eagerly checking results at the 2019 state meet, won't get to compete in the 100 and 200 meters and long jump at this weekend's season-ending 5A Invitational due to a hamstring injury. But she is entered in the shot put after qualifying for that event late in the season. 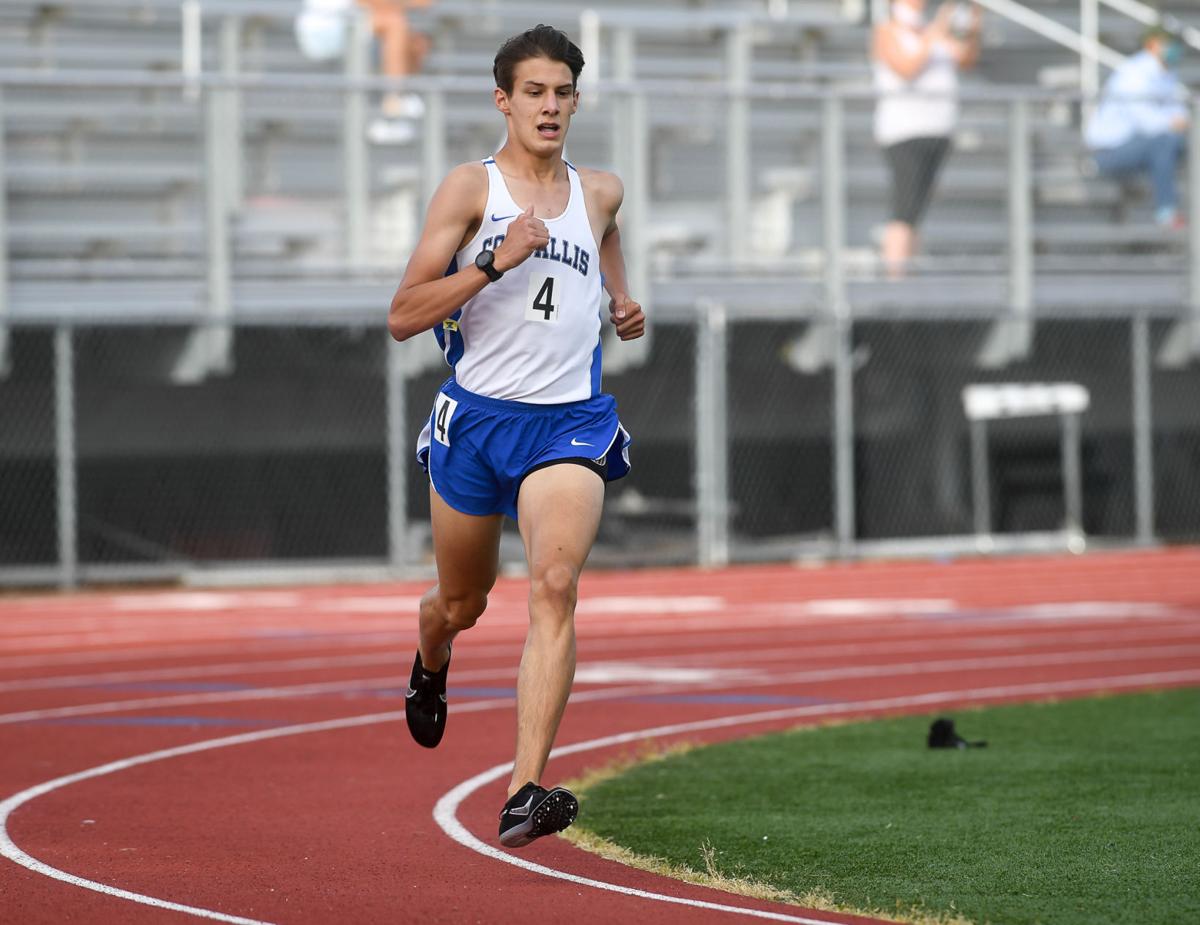 Corvallis senior Aidan Arthur qualified for the season-ending 5A Invitational after some vastly improved times in the 800 and 1,500 meters. 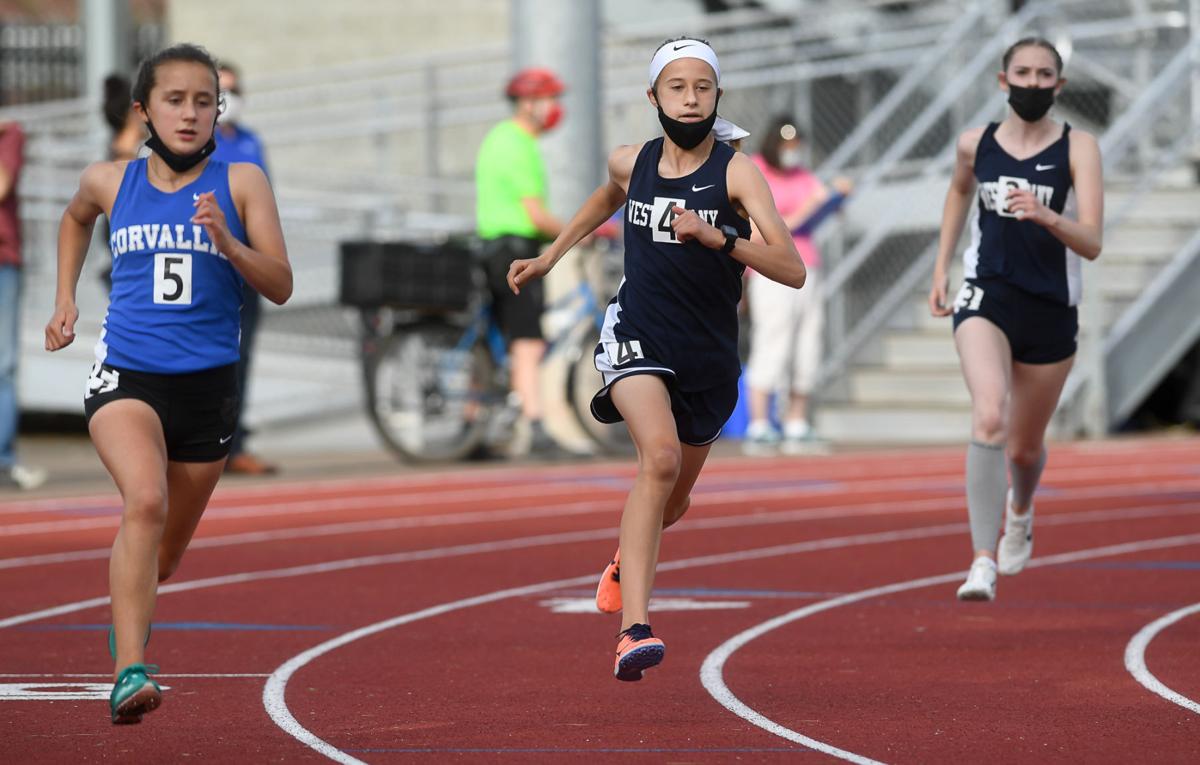 West Albany freshman Haley Blaine, center, is second in the 800 meters and fourth in the 1,500 on the 5A girls season lists this season.

The West Albany High senior had recorded the 5A classification’s top times of the season in the 100 and 200 meters, and she also had the best mark in the long jump, all with significant personal bests.

But then April 29 happened.

In the first two meets of the season, Stefan experienced no problems with the right hamstring she injured back in October. Then she took the baton for the anchor leg in the 4x100 relay in a home meet against Lebanon.

“I think what happened was someone was in front of me for the first time in a while and I just hit a new gear. My hamstring didn’t like that,” said Stefan, who got about 20 meters before the muscle pulled. “It was hard.”

It looked like her season was done. There wasn’t enough time to recover fully for the de facto state meet, which will be held this weekend at Wilsonville High School.

“Imagine I go and run and completely tear my hamstring. It’s not worth it to me,” she said.

But later, she thought, ‘why not try a different event?’ The shot put is what she decided on.

Stefan, who will compete collegiately at Boise State, isn’t built like a thrower but she has some arm muscles. She talked her coaches into letting her try the event and she practiced for two days. With the new injury, Stefan can jog but not sprint, and her shot put throws use only her quads.

On the first day of practice on the event she worked from a standing position and the second day added the footwork before entering the shot put in a dual meet at Corvallis last week.

The result was a toss of 32 feet, 3 inches on her final attempt in the competition. It’s the 12th-best 5A mark of the season and earned her a berth in the 5A Invitational in Wilsonville.

“I came into this meet thinking no stress, I just want to do this for fun. I just wanted to come out and get my uniform on again and have fun,” Stefan said.

Then she looked at the state rankings and realized what she had accomplished and with another week of practice how much she could improve. The top eight placers in Saturday’s competition receive awards.

(Update: She threw 35-2½ Tuesday in a meet at Crescent Valley to move to seventh on the 5A season list.)

Corvallis senior Aidan Arthur has put in the time and has seen his times improve in a big way.

Arthur always considered himself “more of a cross-country guy” and was intimidated by the shorter distances on the track, so he stayed away from track in middle school and into his freshman year.

As a sophomore, he finally broke five minutes in the 1,500 in the final race of the year. When the pandemic hit, and his junior track season was lost, he hit the roads and trails.

“What I really enjoyed during that time was just getting out and running,” Arthur said. “That kept me going over the summer, started training in winter for cross-country and we just rolled straight into track.”

“It’s really been training, putting in more miles,” Arthur said. “Some of that is just luck and growth and genetics, but I’ve been training a lot harder, for sure.”

Crescent Valley’s Jordan Henke is fourth on the 5A 800 season list. Teammates Cade Byer and Keller Norland are eighth and ninth, respectively, in the 3,000 and Norland 10th in the 1,500.

West Albany freshman Haley Blaine has made a name for herself in a hurry.

Blaine is part of a strong contingent of area girls middle- and long-distance runners expected to compete in Wilsonville after a strong regular season.

Crescent Valley’s Sierra Noss is ranked third in the discus and West’s Brooke Donner is tied for fourth in the pole vault.

Paul to be challenged

West Albany senior Aiden Paul looks to have his hands full if he wants to claim his first 5A boys shot put title.

Paul will be a heavy favorite to defend his 2019 state title in the discus. His regular-season best of 176-8½ is more than 25 feet farther than the second-best 5A mark of the season. Paul also threw 180-3 in a club meet in late March.

South Albany’s Draven Wilborn has the fourth-fastest 300 hurdles time of the season and is tied for eighth in the 100 hurdles. Crescent Valley’s Ty Abernathy is fourth in the 400.

Countries that have never won an Olympic medal

Will the Saints make the playoffs?

Will the Saints make the playoffs?

Monroe High junior Laura Young has put herself in the position she’s in now, as a favorite at the 2A track and field state meet, with steady i…

HARRISBURG — Santiam Christian sophomore Benjamin Bourne improved his 3,000-meter personal best by more than 21 seconds Tuesday to get the win…

Not letting a lost track and field season get in her way, Sunitha Black chased down and finally achieved her goal of breaking 18 minutes on a …

Sage Kramer got nervous at the thought of going out for track and field, a sport she was completely unfamiliar with and unsure of all the even…

West Albany's Emily Stefan, seen here eagerly checking results at the 2019 state meet, won't get to compete in the 100 and 200 meters and long jump at this weekend's season-ending 5A Invitational due to a hamstring injury. But she is entered in the shot put after qualifying for that event late in the season.

Corvallis senior Aidan Arthur qualified for the season-ending 5A Invitational after some vastly improved times in the 800 and 1,500 meters.

West Albany freshman Haley Blaine, center, is second in the 800 meters and fourth in the 1,500 on the 5A girls season lists this season.