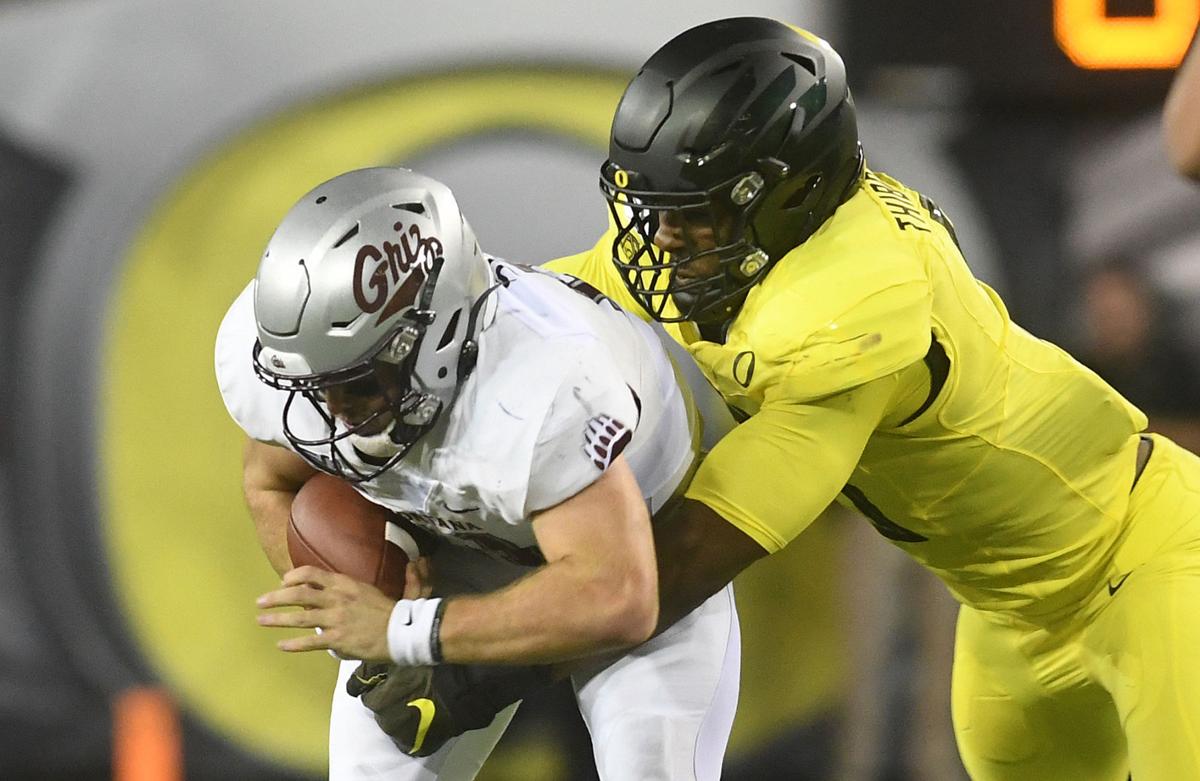 Oregon's Kayvon Thibodeaux brings down Montana quarterback Dalton Sneed for one of his nine sacks in 2019. Thibodeaux is working on his versatility for 2020. 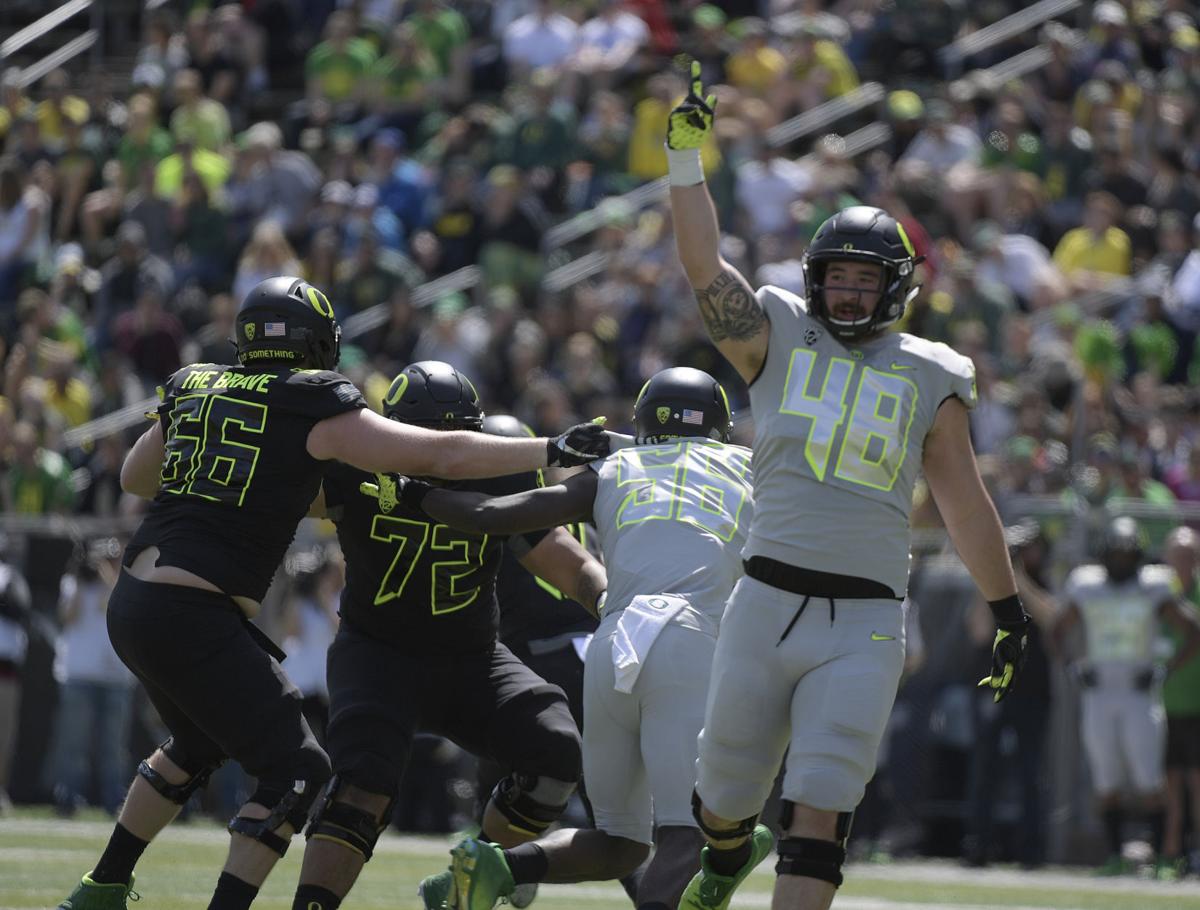 Hunter Kampmoyer celebrates after touching the quarterback for a spring game "sack" in Oregon's 2017 spring game. Kampmoyer is now in his third season as a tight end.

Kayvon Thibodeaux arrived on the Oregon campus last year with only rushing the quarterback and getting sacks on his mind when he came to football.

He publicly proclaimed he wanted 10 sacks. Looking back, he calls that immature. He knows now he has to be much more.

“You’ve got to be a four-down player, you’ve got to be there all the time,” the standout sophomore defensive end told the media Friday. “For me, learning coverage, being just as good in run downs as I am in pass downs. Honestly, it’s the whole nine. You have to have the whole package if you want to be a great player.”

Thibodeaux finished the 2019 season with nine sacks, 14 tackles for loss in all. He had the most sacks by a Pac-12 freshman in 10 years and led the nation with seven sacks in the fourth quarters of games.

He understands now that improving is more than just being the best he can be. It’s about striving for perfection and consistency.

For Thibodeaux, his approach and way of thinking have changed completely from last season.

“When I first came in I was kind of an understudy. I was learning. I was growing,” he said. “Coming into this year with everything that’s been going on, I’ve had to step and (take on) this leader position on the team. So that’s kind of what has been my mindset. I’m not the youngest guy in the room anymore. I’m closer to the oldest. I’ve got to really be the exemplar for everybody younger that me and everybody that’s looking to see what to do.”

A freshman still making his way despite coming in as the highest-rated signee in school history, Thibodeaux was matched up against Penei Sewell routinely in practice.

Thibodeaux said Sewell, who won the Outland Trophy in 2019 as the nation’s top interior lineman before deciding to opt out this season, was a big part in his development.

“He gave me that confidence and every day I knew I had to go against … he’s the best guy in the country,” Thibodeaux said. “So once I did that every day, I could go against anybody. So now going into this year, I have all confidence going into every play.”

It’s been an interesting ride for Hunter Kampmoyer in the Oregon football program.

He was recruited to Oregon to play outside linebacker. But he was moved to defensive end as soon as he arrived in Eugene and played at that position for two years before switching to tight end.

The fifth-year senior wasn’t used much as a pass catcher in 2018, making just one reception while playing in all 13 games. But last season he started seven games, helping the Ducks to Pac-12 championship and Rose Bowl game wins. He had five catches for 59 yards and a touchdown, including two grabs in Pasadena.

“It’s been a crazy journey, a lot of ups and downs and adversity, but thankful to be in the position I’m in and I’m excited for this season,” Kampmoyer said.

Dropping a pass in the Rose Bowl had him down on himself for a while. But Kampmoyer knew he had to put that behind and work to get better.

He spend time focusing on route running, timing and improving his speed and hands. He worked with former Oregon quarterback Justin Herbert leading up to the NFL draft.

The preparation has left Kampmoyer feeling better and more confident about catching the ball.

As a veteran at his latest position, he now finds himself mentoring a teammate making a move similar to the one he did.

DJ Johnson, a junior who transferred from Miami (Fla.) in 2018, is making the jump from defensive end to tight end starting this season.

Last season with the Ducks, Johnson was one of just two players in the nation with at least seven tackles, three for a loss, a sack and a forced fumble in a single game, which he did against Nevada. But Oregon found a spot for him on offense.

“I did the exact same thing, so I give him every advice that I can,” Kampmoyer said. “Coming from defense we kind of have a physical … we have physicality, we love blocking and hitting and stuff, and you see that in DJ as well. DJ is a crazy athlete and he’s going to be a great tight end. It’s already shown in practice. I’m there for him and I’m going to help him along the way with the transition.”

Matt Calkins: Pac-12 doesn't deserve the benefit of the doubt when it comes to the College Football Playoff

Earlier in the month, Washington coach Jimmy Lake was asked about the prospect of getting into the College Football Playoff. Wisely, he refused the bait.

Alabama coach Nick Saban tested positive for COVID-19 and likely will miss the Crimson Tide's game against Georgia this weekend. The Alabama athletic department confirmed the news in an email it sent throughout the SEC on Wednesday. Saban will be re-tested immediately to confirm the results. Otherwise, he'll continue to work from home, which he said he began doing Wednesday afternoon. SEC ...

Oregon's Kayvon Thibodeaux brings down Montana quarterback Dalton Sneed for one of his nine sacks in 2019. Thibodeaux is working on his versatility for 2020.

Hunter Kampmoyer celebrates after touching the quarterback for a spring game "sack" in Oregon's 2017 spring game. Kampmoyer is now in his third season as a tight end.