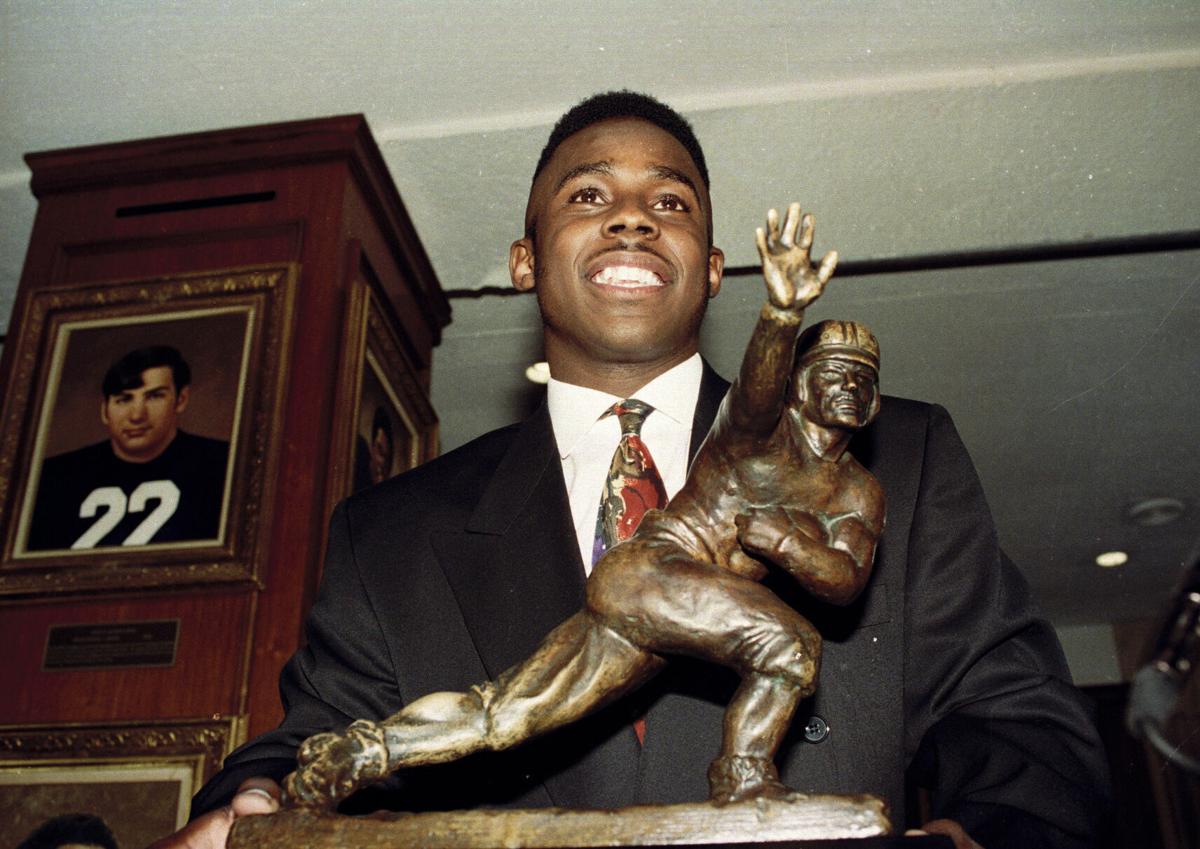 1991 — Desmond Howard, the nation’s second-leading scorer with 23 TDs, wins the Heisman Trophy by the second-biggest margin in history. The Michigan receiver beats runner-up Casey Weldon of Florida State by 1,574 points. 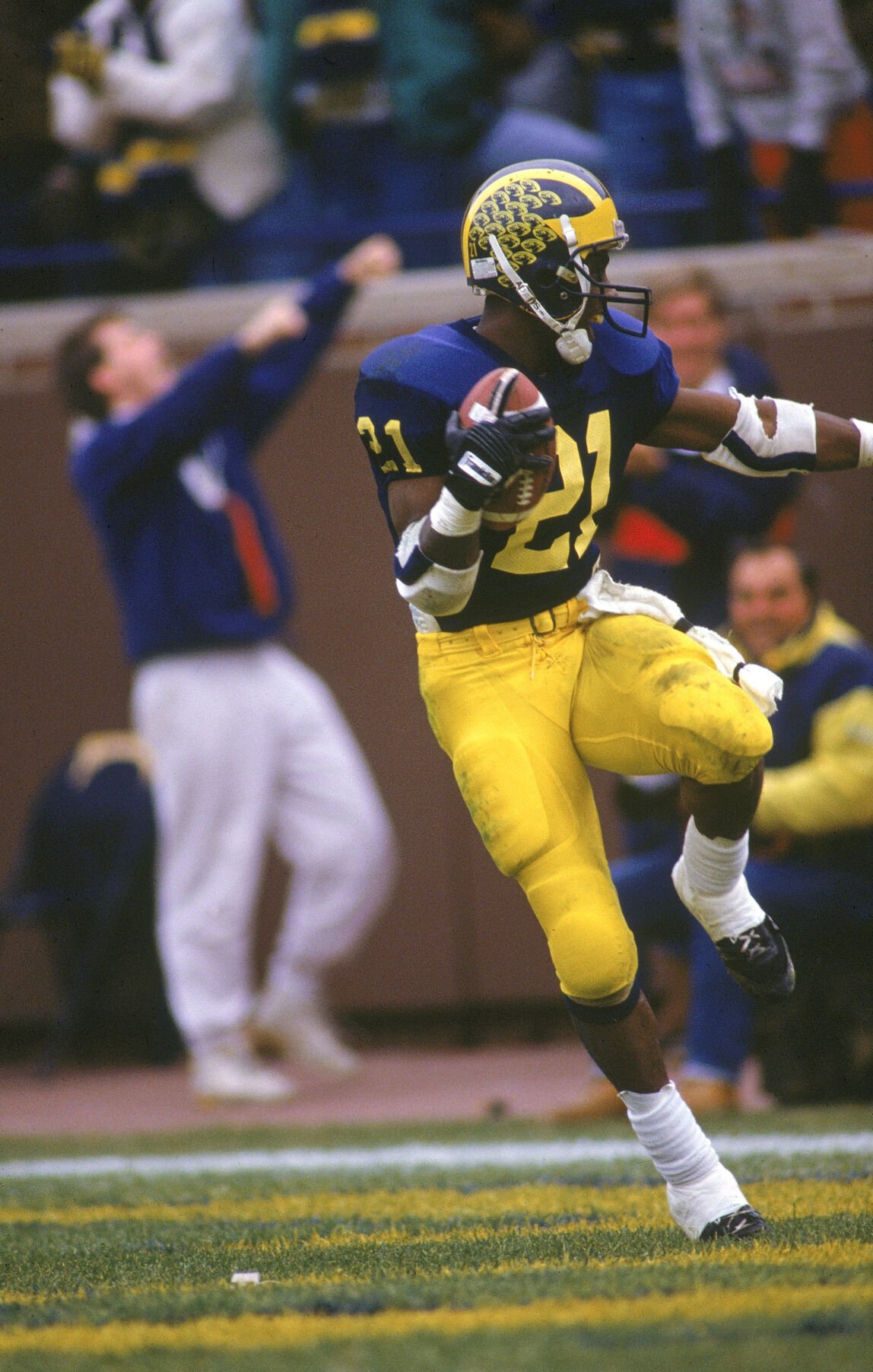 In this file photo, Desmond Howard (21) of the Michigan Wolverines runs in the the 'Heisman' pose right after making a 93 yard touchdown against Ohio State circa 1991 in Ann Arbor, Michigan. (Chris Covatta/Getty Images/TNS)

DETROIT — Way back in the early 1990s, Desmond Howard dazzled with his playmaking as a receiver and return specialist at Michigan.

He left little doubt after scoring on a 93-yard punt return against Ohio State in 1991 that he was thinking of the game’s biggest prize when he fashioned a Heisman pose in the end zone. He would win the coveted Heisman Trophy the next month.

Now, Howard is an analyst on ESPN's "College GameDay" and a proponent of college athletes monetizing their name, image and likeness as of July 1. He hasn’t given much thought to how he could have profited while at Michigan in large part because the game was so different in terms of television rights and coaches’ salaries.

“It’s like night and day compared to where it was when I played, and then you add on social media,” Howard told The Detroit News. “You have these young student-athletes who can create different revenue streams for themselves, and the NCAA didn’t want them to do that at all. They don't want them to make a penny unless they're involved.

“We could have made some money, but compared to what's out there now, the stakes are just so much higher that it’s not even comparable to what these kids can make nowadays. You have so many different revenue streams that they can tap into. We didn’t have anything like that when I was in college.”

Many college athletes have enormous social media followings and companies can latch on to those platforms to advertise.

“I was always baffled that people did not understand that players should be paid for their likeness. I consistently say that this whole model where you have like these 17-, 18-year-olds signing away their likeness for perpetuity, all these adults are OK with this because they all make the money. That was always mind-blowing to me, like, this is ridiculous.”

What Howard loves about athletes profiting off their name, image and likeness is that this will benefit all college athletes.

“That's the beauty of it — it’s not like it’s gender specific, it’s gender neutral,” Howard said. “I mean, women can make money off of this, just like men. And you do have these athletes who have these huge followings, who are technology and social media savvy. They know how to work it where they can benefit, which it should work in their favor. If you have that type of knowledge and that type of savviness about you then you should benefit from it. Plus, on top of that, you're doing whatever you're doing as a student-athlete at the school for the athletic program, too. I love the fact that these female athletes get to benefit from it also.”

Howard also thinks that athletes being able to profit in this NIL world might encourage some football players who are considering leaving early but could boost their NFL draft stock with another year to stay in college for that extra year.

As a former player and longtime observer of college athletics, Howard said it has been interesting to see how it’s evolving, particularly these last few weeks. Last month, the Supreme Court ruled unanimously against the NCAA in the NCAA v. Alston, but it was Justice Brett Kavanaugh’s scorching concurring opinion that drew the most attention.

“Nowhere else in America can businesses get away with agreeing not to pay their workers a fair market rate,” Kavanaugh wrote. “And under ordinary principles of antitrust law, it is not evident why college sports should be any different. The NCAA is not above the law.”

That was pivotal, Howard said, in terms of a momentum shift.

“These student-athletes have a tremendous amount of power, and I think they're starting to realize how much power that they have,” Howard said. “Justice Kavanaugh came down on them hard about this model that NCAA has been using for so long. It’s also telling that it was a unanimous. It’s crazy, like, no, this is a shutout. This is unanimous. This is how crazy this is, you’ve been doing this to these kids for this long.

“I think this has proven the NCAA’s worth wasn't as great as we all thought. I thought they were the governing body of the NCAA and whatever they say goes, but with COVID-19, it pretty much gave us an opportunity to see what was really behind that curtain. They were exposed when COVID-19 hit and they had no protocols, no guidelines, no answers. Every conference was out for themselves, and I was like, ‘Wait, what?’ So they've been pretty much exposed. That's the other part of this equation and it’s really interesting to keep an eye on, too.”

Harris had 79 tackles — one behind Dylan Moses for the team lead — 4.5 sacks and an interception as a sophomore. Top needs: RB, Edge, LB

Jackson can play in space or rush the passer off the edge. In 2019, he was the first true freshman to start a season opener for the Trojans on the defensive line since Everson Griffen in 2007 (and just the second since Tim Ryan in 1986). Top needs: OL, Edge, S

Elam took a step back after an impressive freshman campaign in 2019. He'll be hard to pass on as a 6-foot-2 corner with elite ball skills if he can fine-tune his technique and become a more reliable tackler. Top needs: CB, LB, OL

The 6-foot-5, 315 pound Nelson has developed into one of the premier pass blockers in college football. Top needs: OL, Edge, S

Cross is a powerful blocker who can do damage at the second level in the run game with premium athleticism and his target-lock awareness. Top-10 is a possibility if he develops as a pass protector. Top needs: OT, Edge, TE

Jobe would have been a day two pick had he declared for the 2021 NFL Draft, but he decided to return to Tuscaloosa for a little bit more seasoning. Top needs: CB, S, WR

The Mission Hills product shunned millions of dollars to come back for his senior season in Columbus and will likely be a top-three prospect at the position in 2022. Top needs: WR, CB, OL

Mays has the talent and size (6-6, 325) to play all five positions on the offensive line. He's likely the most refined blocker in college football. Top needs: WR, LB, OL

Hutchinson suffered season-ending ankle surgery in 2020, but he was disruptive as a sophomore in 2019. He produced 4.5 sacks, 10 tackles for loss, six pass deflections and two forced fumbles. Top needs: Edge, OL, S

This projection is based on Thomas' special talent, but he has to stay healthy and develop consistency. Top needs: Edge, WR, DT

Walker would have heard his name called had he declared for the 2021 NFL Draft, but his current developmental trajectory puts him as one of the first offensive lineman off the board in 2022. Top needs: CB, TE, S

Metchie could be the fifth Alabama wide receiver selected in the first round in three years. He had 916 yards on 55 receptions and six touchdowns in an offense dominated by Heisman Trophy winner DeVonta Smith and Najee Harris. He'll be Bryce Young's clear-cut number one target in the fall. Top needs: OT, WR, CB

Davis would've likely been the first defensive tackle selected this year had he left school — Christian Barmore was selected by the Patriots in the second round with the 38th overall pick. Top needs: WR, DT, QB

Linderbaum was recruited as a defensive lineman, but switched to the offensive line during bowl prep of his freshman season and has never looked back. He heads into the fall as the top center in college football. Top needs: OT, DL, C

Every starting cornerback for the Buckeyes since 2013 have been drafted — seven in the first round. Banks has the physical traits and skillset to keep the party going. Top needs: CB, LB, WR

The pandemic limited Karlaftis to only three games last fall (he still had two sacks), but he was an AP Freshman All-American in 2019 after producing 7.5 sacks with 17 tackles for loss as a true freshman. Top needs: DL, WR, CB

Winfrey's quickness makes him a disruptive force on the interior. He'll be the anchor of a potentially dominant Sooners defense this season. Top needs: LB, WR, DL

Will we see Max Scherzer traded?

How may players on the Cubs will be traded before the deadline?

How may players on the Cubs will be traded before the deadline?

How the U.S. Women’s Soccer Team trained for Tokyo heat

How the U.S. Women’s Soccer Team trained for Tokyo heat

1991 — Desmond Howard, the nation’s second-leading scorer with 23 TDs, wins the Heisman Trophy by the second-biggest margin in history. The Michigan receiver beats runner-up Casey Weldon of Florida State by 1,574 points.

In this file photo, Desmond Howard (21) of the Michigan Wolverines runs in the the 'Heisman' pose right after making a 93 yard touchdown against Ohio State circa 1991 in Ann Arbor, Michigan. (Chris Covatta/Getty Images/TNS)