Become a Member
Read Today's E-edition
Share This
OSU women's basketball: Beavers have the size, versatility to be a defensive power
0 Comments
Share this
1 of 2 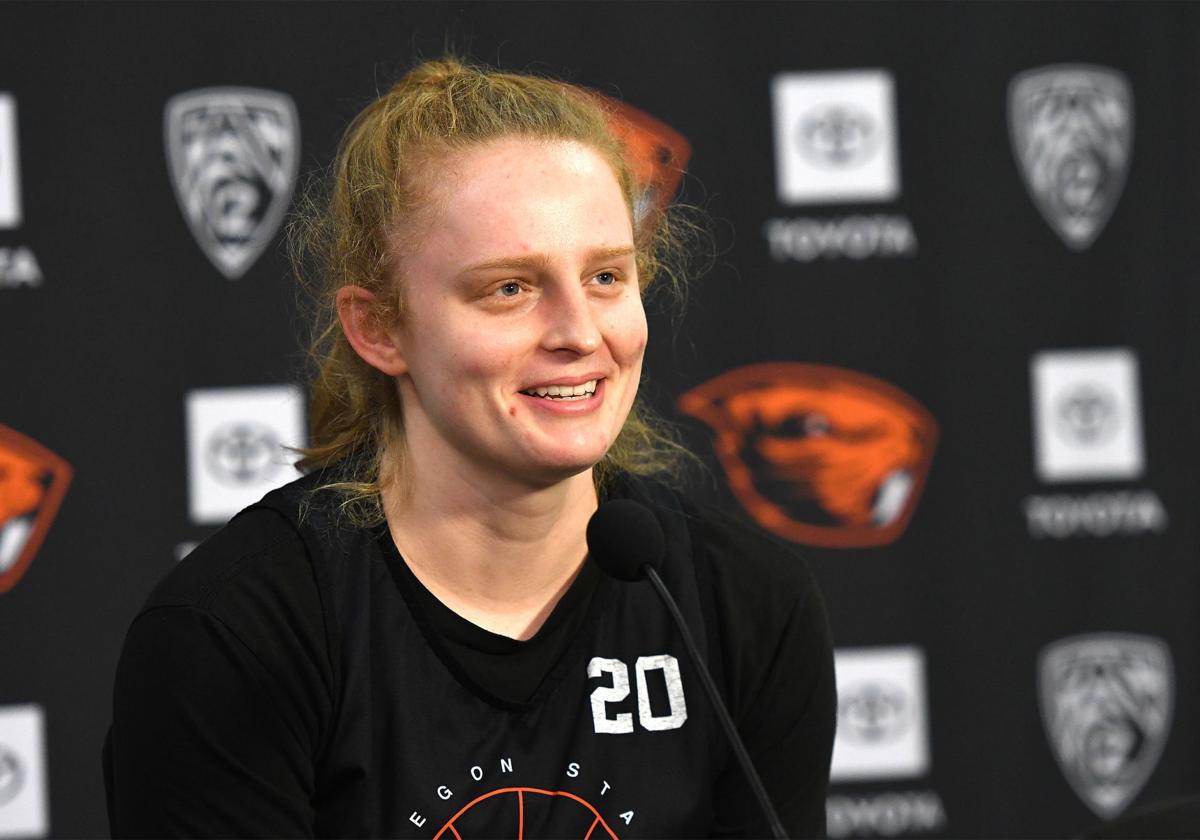 Oregon State's Ellie Mack talks about the anticipated December matchup with Villanova in her home state of Pennsylvania. 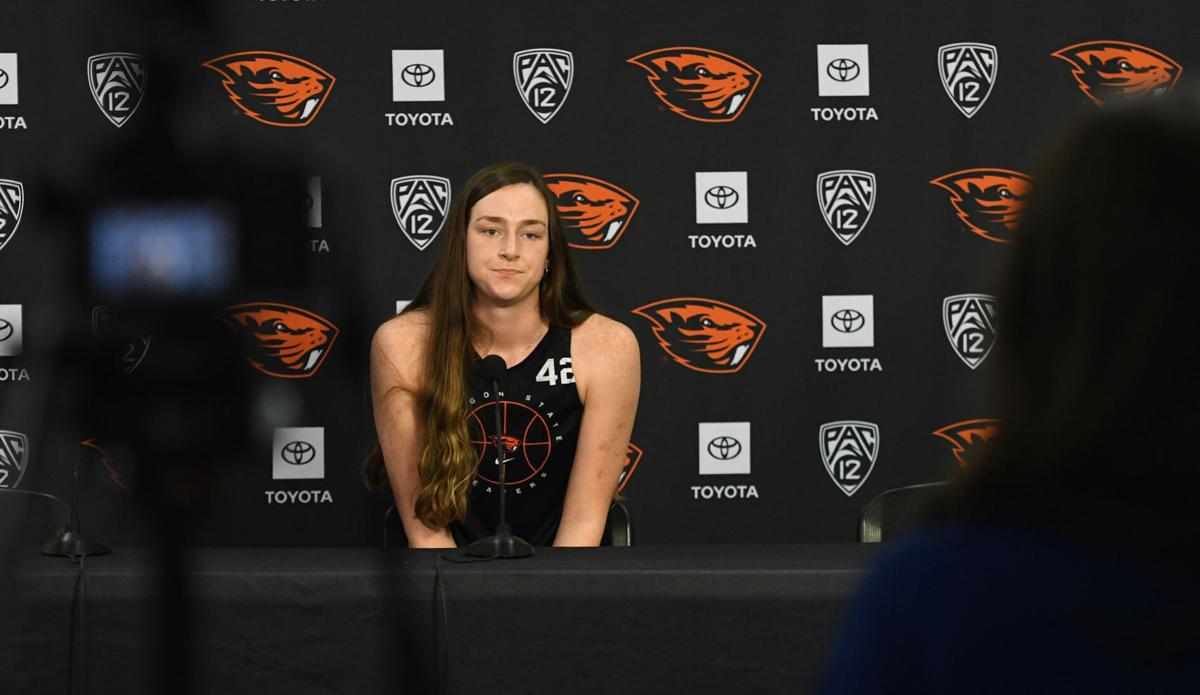 Oregon State's Kennedy Brown listens to a question during a media day press conference at Gill Coliseum on Wednesday.

The Beavers have seven players on their roster 6-foot-3 or taller. That compares very favorably to the size on any WNBA roster and it raises interesting questions about potential lineups head coach Scott Rueck could use.

In an interview Wednesday at Gill Coliseum, Rueck was asked if he would consider playing 6-9 Jelena Mitrovic, 6-6 Kennedy Brown and 6-4 Taylor Jones at the same time.

“Why not? Absolutely. I think they’re versatile enough. That’s probably one of the strengths of the team, I would say, is our versatility,” Rueck said.

That versatility is demonstrated in the likely manner in which those three players would likely be used. Mitrovic would play the power forward position, which in Rueck’s offense is a perimeter role. Jones would play center and Brown would be the small forward.

Mitrovic’s shooting ability allows her to step outside on offense and Brown’s agility and defensive intelligence allows her to defend on the perimeter.

“It really comes down to the defensive end of the floor. Offensively, if you can shoot the ball, it doesn’t matter where you play,” Rueck said. “It’s really the other end of the floor that might limit someone from playing the perimeter. Can you guard a guard? Bottom line.”

Jones thinks the team has the pieces in place to be very effective defensively.

“I think it’s going to be hard to get past us on the defensive end and hard to score on us. Hopefully, we won’t give up a lot of layups this year because we’ll have a bunch of rim protection,” Jones said. “I think our defense is going to be very, very key this year. I think we’re going to be great at it.”

Point guard Talia von Oelhoffen is looking forward to playing with this frontcourt.

“Obviously, that’s a point guard’s dream to play with posts like that. Just the depth, having four true centers that could start at any DI team in the nation, to have so many of them, it’s amazing to play with and I’m so excited for it,” von Oelhoffen said.

Outside of their posts, the Beavers are also blessed with good depth and size at the wing position. Taya Corosdale, a 6-3 redshirt junior, and Ellie Mack, a 6-3 redshirt senior, are two of the options at that spot.

Looking at the roster, it is clear that Rueck has good options available all over the floor and in the coming weeks he will have some difficult decisions to make when it comes to naming starters and setting a rotation.

Mack said the players are all embracing their roles and working to be supportive of each other.

“Obviously playing time hasn’t ... been figured out entirely yet, but in practice it’s just been about making each other better. That’s how I kind of view it with Taya and myself, because we kind of play the same position, but she makes me better every day. I do the same for her,” Mack said.

Rueck said they have all impressed him with their focus during these preseason practices.

“I’m impressed every day by how quickly they pick things up. I would say that one of the hallmarks of this group is maturity,” Rueck said.

Oregon State will play at Villanova on Dec. 12. Mack is from Paoli, Pennsylvania, and she admitted to encouraging the coaches to schedule a game in the area. She is delighted that the team was able to schedule this game and she expects to have friends and family in attendance.

“I grew up about 20 minutes away from Villanova,” Mack said. “Growing up, I went to their games and actually my high school graduation was held in that gym. I’ve been in that gym a bunch but never actually played there, so this is full-circle for me.”

Oregon State was ranked No. 14 in the Associated Press preseason poll, behind Pac-12 Conference rivals Stanford (No. 3) and Oregon (No. 10).

Corosdale said the polls aren’t that significant to the players, but they can serve as motivation.

“We usually don’t pay too much attention to the rankings, honestly. And if we do, it gives us more of a chip on our shoulder than anything. But regardless, we just work our hardest every day,” Corosdale said.

Oregon State women’s basketball coach Scott Rueck has a lot of talented new faces to incorporate into the rotation this season.

Scott Rueck faced one of the most difficult moments of his coaching career last spring during the NCAA women’s basketball tournament.

Oregon State gave up a late goal off a corner kick in a 2-1 loss to Washington on Thursday afternoon at Lorenz Field.

The Oregon State men’s soccer team is claiming a place among the top programs in the nation.

The game won’t count but the cheers will be real when the Oregon State women’s basketball team hosts Western Washington at 1 p.m. Saturday aft…

The No. 14 Oregon State women's basketball team defeated Western Washington, 73-43, on Saturday in an exhibition at Gill Coliseum

The Oregon State women’s basketball team underwent a changing of the guards this summer. Standout Aleah Goodman departed after her senior year…

Oregon State's Ellie Mack talks about the anticipated December matchup with Villanova in her home state of Pennsylvania.

Oregon State's Kennedy Brown listens to a question during a media day press conference at Gill Coliseum on Wednesday.