Become a Member
Read Today's E-edition
Share This
OSU football: With reps under his belt, Wright is ready to make an impact
0 Comments
Share this
1 of 2 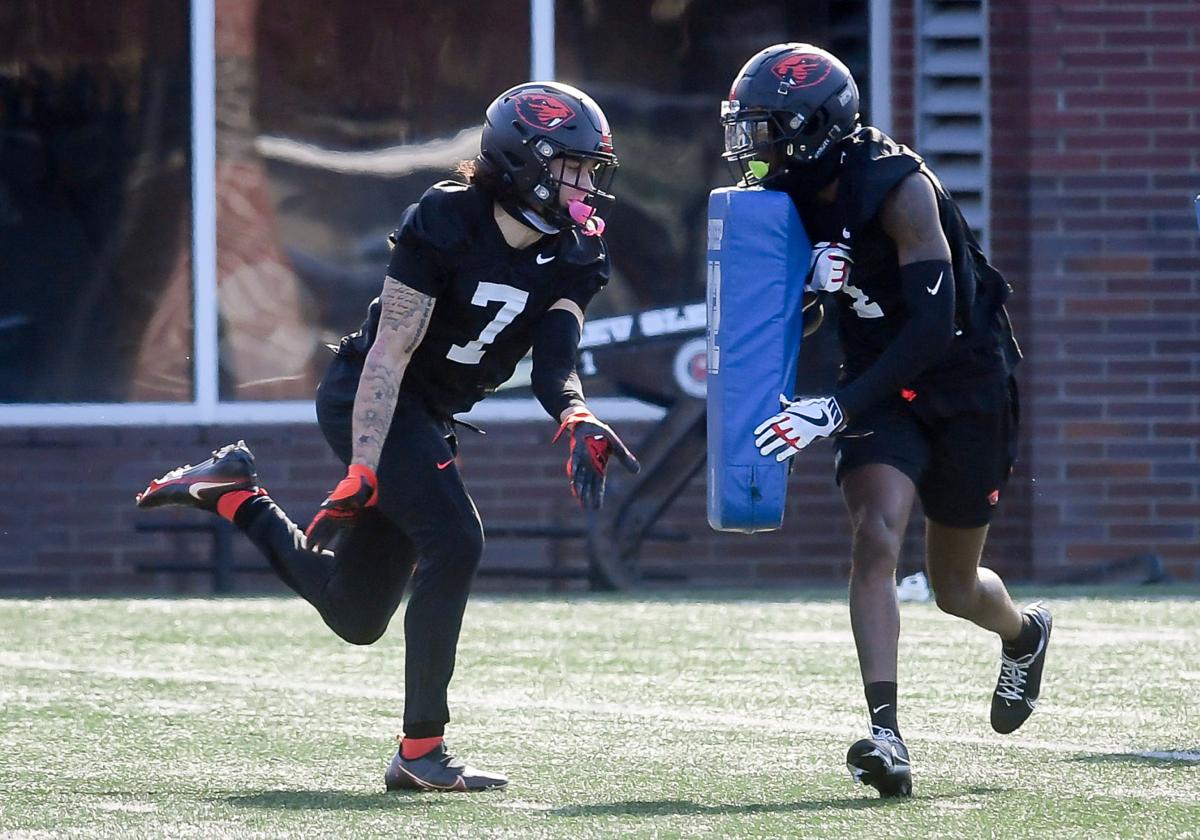 Rejzohn Wright, right, runs through a spring practice drill last April with teammate Alton Julian. Wright transferred to Oregon State in 2020 but missed out on spring practices that year due to the pandemic.

Rejzohn Wright, far right, has developed as a vocal leader in the Oregon State football team after joining the program in spring 2020.

It’s been a productive year for Rejzohn Wright, who has gone from not playing much in his first season at Oregon State to being a leader and projected starter in the defensive backfield.

The junior, who played two years at Laney College before joining the Beavers and his brother Nahshon in 2020, missed out on spring football last year and played sparingly in six games.

Now, with some experience in the program, he’s feeling the heat of having to hold off teammates for playing time. But he enjoys the competition.

“The spot is never just mine,” Wright said. “So I just want to keep going and extending the gap with players that are coming to get my position.”

Wright was planning to participate in the second half of OSU’s spring practices after transferring in 2020, but those were canceled. Summer workouts weren’t held consistently due to the pandemic, and then the season was pushed back to a November start.

But circumstances have changed, and Wright has pushed hard for a bigger role.

“He really hadn’t had any reps with us before fall camp,” Beavers defensive coordinator Tim Tibesar said. “Now he’s had a whole year of practice underneath, a full spring ball this year. He’s significantly ahead of where he was a year ago.”

Describing the progress, Tibesar says Wright has had “just a huge growth in attention to detail and being exact in technique and a more disciplined player than he was at this time last year.”

The repetitions Wright has built up in 2021, both in spring and the current fall camp, have been important, he said. But he realized when he went home to the southern Bay Area that he couldn’t take any breaks if he wanted to bust through and make an impact on his team.

“It’s just like amped my game and basically made me who I am now. Reps and just keep going,” he said. “I had to wait my turn, just as everybody else had to. I always felt like I could play, last year when I wasn’t playing. I waited my turn and I grinded and I’m where I am now. I’m just happy to be here.”

As one of the defense’s older players, Wright has developed into a leader.

He’s been challenged to step out of his shell and use his voice more regularly.

“Back in the day, a long time ago, I used to be a by-example guy but I’m learning that that’s just not enough for younger guys,” Wright said. “Now I feel like I’m talking more and showing them where they need to be and stuff like that.”

In 2020 with the Beavers, brother Nahshon showed his potential and was a third-round pick of the Dallas Cowboys. He reportedly signed a four-year contract.

Rejzohn Wright said that gave him confidence in what he can accomplish.

No shortage of physicality

Offensive players have noted the physical play of the defensive backs in coverage during the first week of fall camp.

“We certainly want to be as aggressive as we can,” Tibesar said. “We’ll get some officials out here on Saturday (in the team’s first scrimmage) and see if we’re being too aggressive. I'd rather say woah than giddy up as far as the aggressiveness goes than try to pull the guys back.”

Added Wright: “I think we’re real physical in the back end I think it could be more. It’s practice and these are our guys too, so we try to keep them up. But once game day comes I don’t think anybody’s going to shy away from contact.”

Wright, listed at 6-foot-2 and 191 pounds, bodied up wide receiver Makiya Tongue (6-2, 223) to force an incompletion on a short-yardage pass in Thursday’s practice. Wright talked about using his body and making those kind of plays.

“It really depends on the receiver and what type of guy I’m going up against. Guys like Makiya, he’s a bigger receiver, easier to get my hands on,” Wright said. “I don’t think he’d really challenge me down field. I don’t want to say it was easy, but it was pretty easy.”

Prep football: Monroe is the league favorite, but Jefferson and Central Linn hope to climb

Monroe is the team to beat in 2A Special District 3 football until someone knocks the Dragons off the top spot.

Sophomores have filled South Albany football’s starting lineups in large numbers the past two seasons, resulting in some difficult results on …

Rejzohn Wright, right, runs through a spring practice drill last April with teammate Alton Julian. Wright transferred to Oregon State in 2020 but missed out on spring practices that year due to the pandemic.

Rejzohn Wright, far right, has developed as a vocal leader in the Oregon State football team after joining the program in spring 2020. 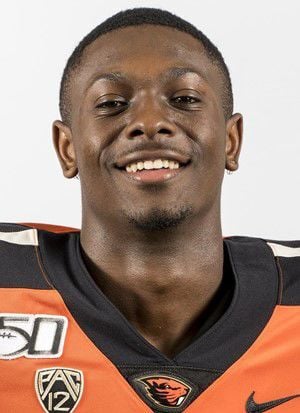