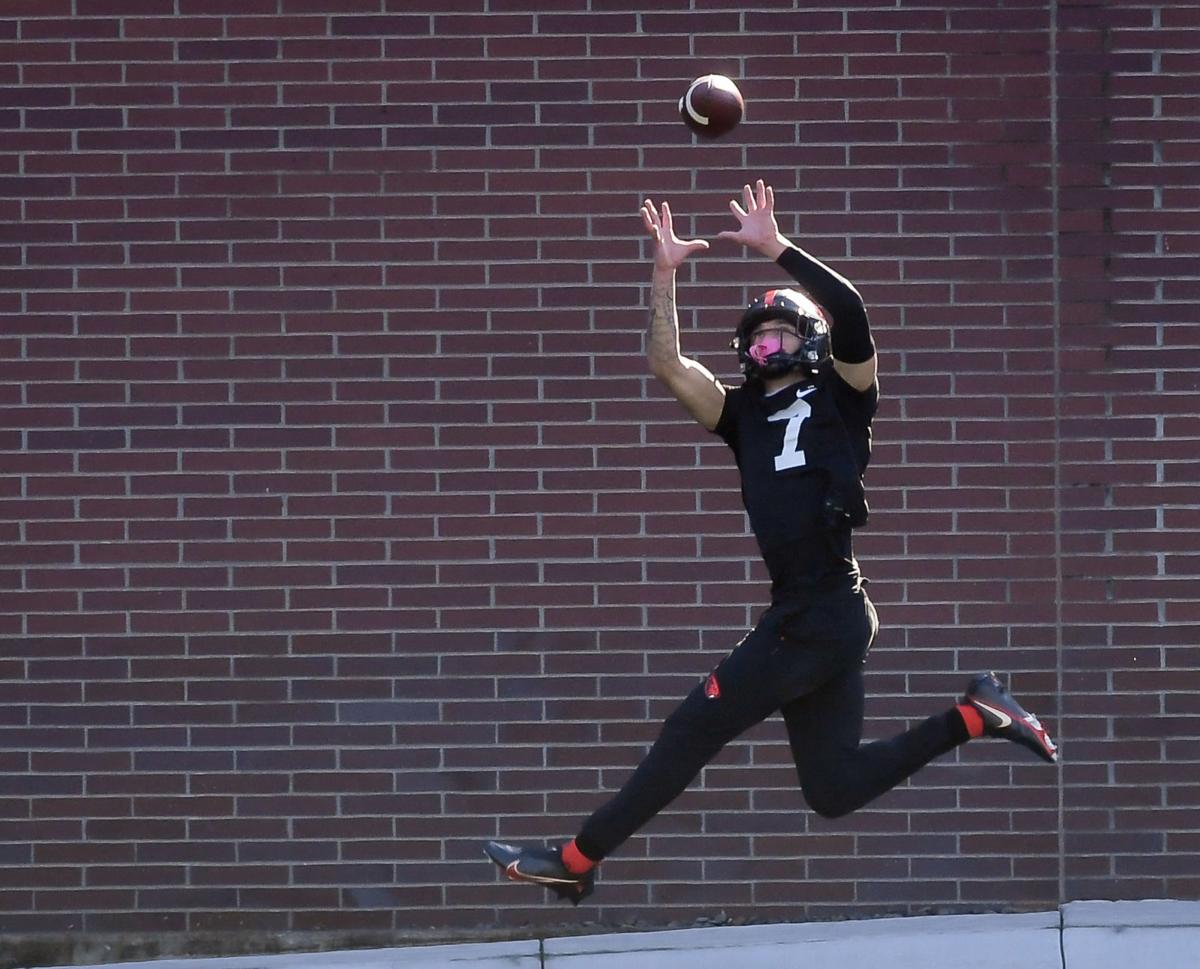 Oregon State defensive back Alton Julian makes a catch during Thursday's practice. The Beavers' defensive backfield has proven talent that could lead to more turnovers.

Oregon State's defense is looking to improve on a 2020 campaign during which it finished with the third-worst scoring defense in the Pac-12.

Oregon State’s players are tired of constantly being asked when the defense is going to ‘make the leap.’

They are ready to make it happen.

After three seasons of delivering mixed results under coach Jonathan Smith and defensive coordinator Tim Tibesar, the Beavers enter 2021 with as much talent and continuity on the defensive side of the ball as they have had in a long, long time. The time has come, the players believe, for that talent to start showing up on the scoreboard.

“There’s this hunger,” junior defensive end Simon Sandberg said of the mood surrounding the team during spring ball. “We know we’re so much more than what we’ve shown. I think everybody just wants to show what we can do now.”

That starts with creating more takeaways.

He and the rest of Oregon State’s coaches are so determined to up the pressure on other teams that they conducted a study during the offseason of how teams around the nation have generated fumbles in recent seasons.

“We’re trying to create more violence on the ball carrier when we make tackles,” Tibesar said. “We’re just trying to get our guys to cut loose and play fast and be more aggressive in their approach to the tackle. That’s really, when we did our study, how we noticed teams are causing more fumbles.”

The 33.3 points per game the Beavers surrendered last season ranked 10th in the Pac-12, and was slightly worse than the 32.5 they yielded the year prior.

The most steady facet of the defense came up the middle, where middle linebackers Avery Roberts and Omar Speights were both ultra-reliable tacklers in the open field. Tibesar pointed to that duo as players who do a good job bringing the ‘violence’ with their tackles that the coaching staff is looking for. He wants to see more of that across the board, and wants to see players go into tackles without the fear of what might happen if they miss.

“I’m going on my third year now, and there’s people who have been here longer than me,” Speights said. “People are tired of finishing below .500. I think we’re all in and ready to take that next step.”

Tibesar is also hoping for more takeaways in the secondary. Jaydon Grant and Nahshon Wright led the Beavers with two interceptions apiece in 2020, but they only finished with five as a team, and Wright is now gone to the NFL.

With a deep group of defensive backs that includes Grant, Alex Austin, Akili Arnold and incoming transfer E.J. Jones, the talent is there to create more chaos in passing situations. But the Beavers will also need to see a boost in productivity in regards to pressuring opposing quarterbacks.

They tallied just seven sacks as a team in seven games last fall.

Tibesar believes that the pieces are in place for the Beavers to develop into a group that can constantly force opposing offenses off the field.

“Looking at where we’re at right now, with the amount of talent and depth, it’s the most that we’ve had since coach Smith and I have been here,” Tibesar said. “So that’s exciting for us. We’ve got some steps to make before we can get there, but that’s certainly our goal.”

During his debut season with the Oregon State football program, Chance Nolan flashed dazzling athleticism and looked like he could be the Beav…

OSU football: With first week of spring ball in the books, Beavers ramp up toward scrimmage

Throughout the first few days of spring practice, Oregon State football  coach Jonathan Smith and his staff were honed in on making sure the B…

One of the biggest indicators of the progress Oregon State has made over the past 12 months is its situation along the offensive line this spring.

At long last, Oregon State’s player got to put on the pads and go head-to-head on Saturday. From the sound of things, there’s reason to be opt…

Oregon State defensive back Alton Julian makes a catch during Thursday's practice. The Beavers' defensive backfield has proven talent that could lead to more turnovers.

Oregon State's defense is looking to improve on a 2020 campaign during which it finished with the third-worst scoring defense in the Pac-12.