Become a Member
Read Today's E-edition
Share This
OSU football: Seniors paved the path, put in the work to help turn the corner
0 Comments
Share this
1 of 2 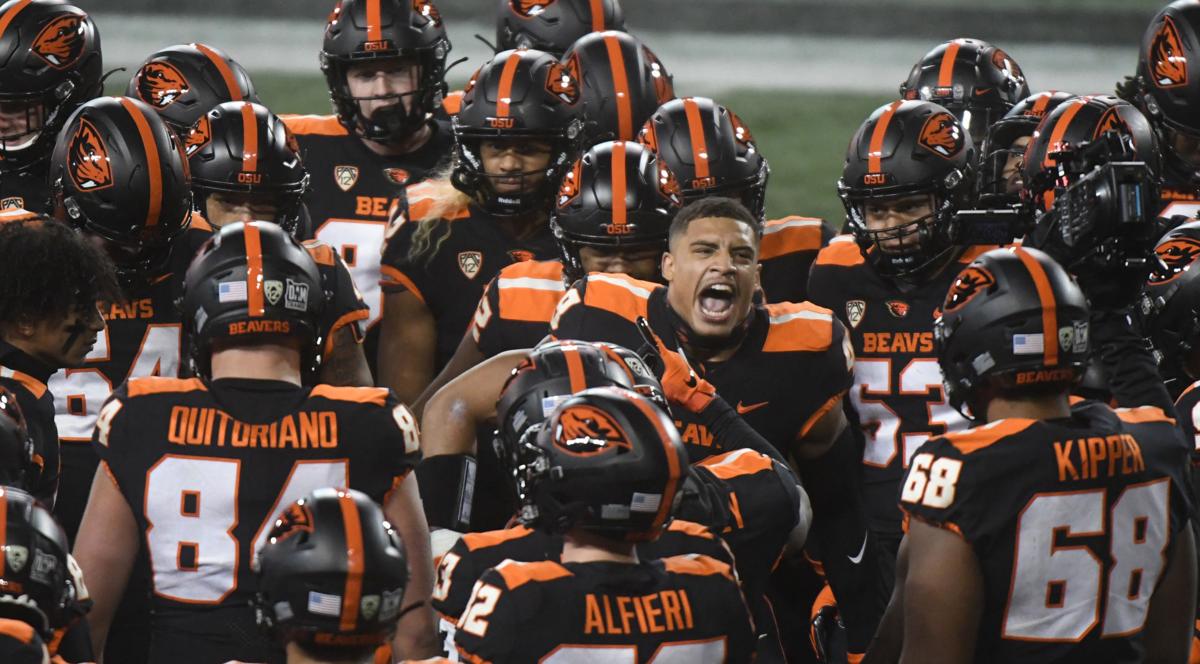 Oregon State's Andrzei Hughes-Murray rallies the team before the Beavers' season-opening game against Washington State in 2020. The linebacker is part of OSU's senior class that is credited with leading the program in turning the corner to reach bowl eligibility this season. 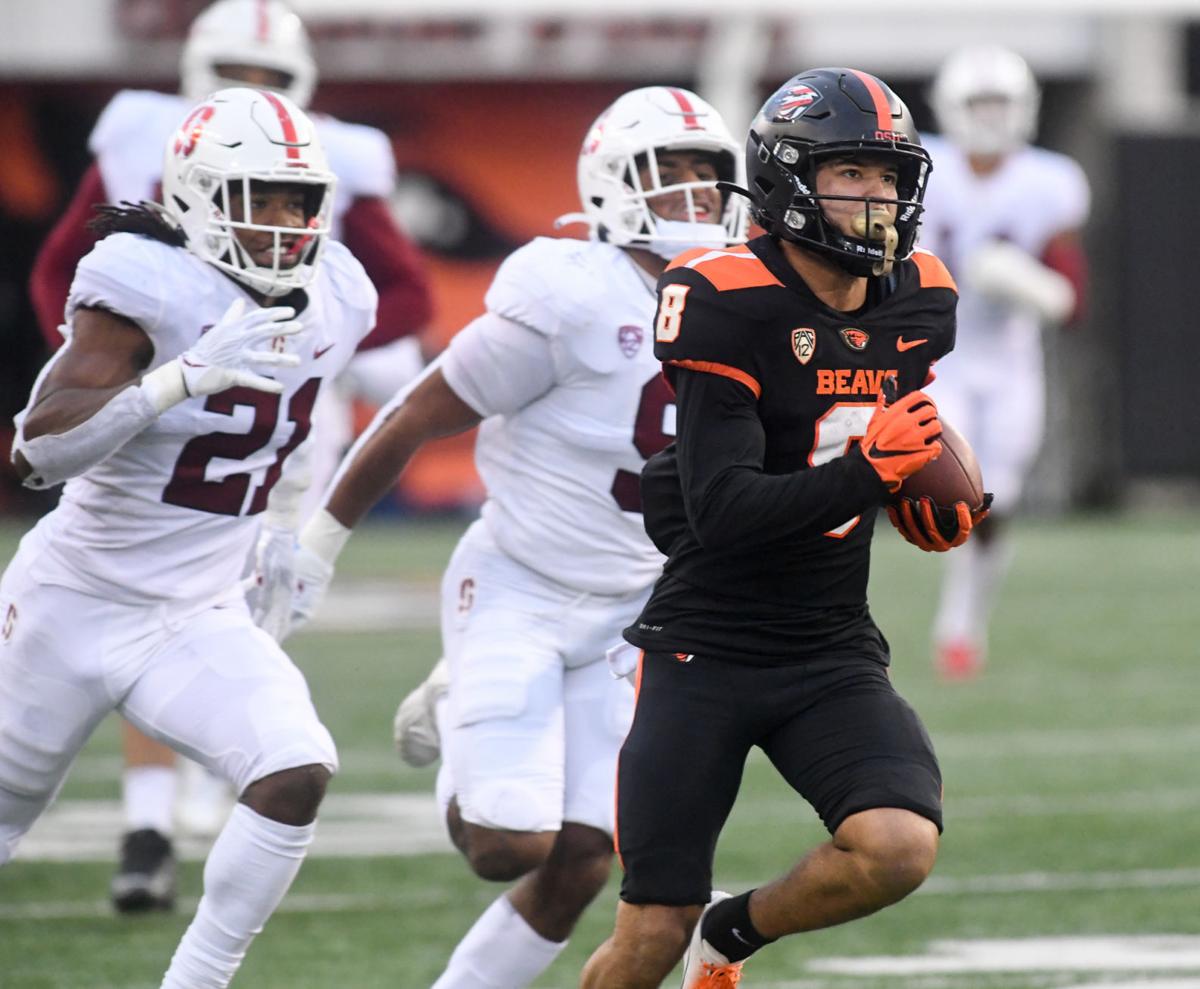 Trevon Bradford breaks away for a touchdown against Stanford last week. Bradford and fellow Oregon State seniors Andrzej Hughes-Murray and Nous Keobounnam are sixth-year players in the program.

“You know more of these guys’ stories, what they’ve overcome and achieved. So it’s meaningful stuff,” he said.

Before Saturday night’s home game against Arizona State, the Beavers will recognize nine seniors — wide receiver Trevon Bradford, offensive linemen Nathan Eldridge, Nous Keobounnam and Korbin Sorensen, quarterback Sam Noyer, outside linebacker Andrzej Hughes-Murray, defensive linemen Jeromy Reichner and Keonte Schad and defensive back Elijah Jones — and a few others who may or may not return next year but are invited to participate in the ceremonies even if they haven’t made a decision.

Inside linebacker Avery Roberts, a redshirt junior, a defensive leader who has played at a high level this season, is expected to be among them.

The seniors are credited with turning a losing culture in the program into a winning one. OSU (6-4, 4-3 Pac-12) has reached bowl eligibility for the first time in eight years. Most of those players were just starting high school.

In seven previous seasons, the Beavers were a combined 21-58 overall and 12-49 in conference play. The seniors have led a drastic turnaround, and a young roster leaves hope for the future.

“The seniors, they’ve really gathered this team together. When I first got here, it wasn’t as close, tight-knit as we are now,” said quarterback Chance Nolan. “We want to send our guys out the right way always. Every week we want to go out there and get one for our boys, and it will be great to go Saturday night in Reser one more time for them.”

Redshirt sophomore outside linebacker Riley Sharp, a fourth-year player in the program who has played alongside many of the seniors, made a connection with Hughes-Murray in 2015 when they made their official visits to campus together.

Sharp says his good friend is part of the base that the program has been built from under Smith. He hopes to be a part of what he considers the sendoff the seniors deserve because of what they’ve given during their time in Beavers uniforms.

“These seniors are people we could count on, and I know the coaches could count on,” Sharp said, adding that the culture feels different now than when he first arrived. “They were people who, even in the previous program, knew what it would take to develop this culture and build a solid foundation for all of us to be successful. So really got to owe it to some of these older guys to look at where we’re at today, because of a lot of their hard work and dedication to this program.”

Smith was asked earlier in the week specifically about Bradford and Hughes-Murray.

Both played extensively as true freshmen. Each missed time in 2019 due to injury — Hughes-Murray for the season and Bradford for the first seven games.

Smith said those two are “favorites on this team.”

“Been through a lot, overcome a lot, injury-wise for both of them throughout their careers, coaching changes, different schemes, obviously some tough defeats and kept battling,” the coach said. “Those guys have been huge leaders for us, really the last few years.”

Keobounnam is another sixth-year player in the program and a three-year starter. Reichner is in his fourth season with the Beavers and Eldridge his third. In all, the nine seniors have 30 combined years in the program.

Nolan came to Oregon State 22 months ago after transferring from a junior college. He says winning brings the long-desired fun and excitement that the coaches, players and fans are experiencing now. He believes more success will get more people involved in the progress that’s been made.

But Nolan credits the program’s current status to the time and effort that the seniors have put in to help turn the corner.

“Those guys, they stuck it through the mud. They kind of had a struggle when they first got here. Now our team is a winning team,” he said. “We’ve come in thinking and knowing that we should be able to win every football game if we play to the best of our ability and if we execute the right way. I think that’s changed drastically. The confidence in our team, week in and week out.”

Eldridge and kicker Everett Hayes have been named Academic All-District 8 as announced by the College Sports Information Directors of America. They are now eligible to receive academic all-American honors, which will be announced Dec. 15.

A literacy, learning and leadership graduate, Eldridge was a 2020 all-Pac-12 first team selection and was also named to the conference’s academic honor roll.

Hayes, a sophomore mechanical engineering major, owns the longest field goal in the Pac-12 this season at 60 yards at Colorado. He was also a 2020 Pac-12 academic honor roll selection.

For the first time in four weeks, Oregon State heads into a football game with an opponent that has legitimate chances of participating in a m…

Oregon State’s transition to a new defensive coordinator came off without a hitch, at least in the first week.

OSU football: Defense got the job done versus Stanford

Oregon State wasn’t facing one of the most imposing offenses that Pac-12 football has to offer last Saturday, but the Beavers accomplished a g…

With the Oregon/Oregon State rivalry game Saturday, Nov. 27, sales in Beaver gear are spiking as OSU fans prepare to wash out the yellow and g…

MCMINNVILLE — A football season that had a lot of questions at the start ended 10 wins later in the state semifinals.

Oregon State's Andrzei Hughes-Murray rallies the team before the Beavers' season-opening game against Washington State in 2020. The linebacker is part of OSU's senior class that is credited with leading the program in turning the corner to reach bowl eligibility this season.

Trevon Bradford breaks away for a touchdown against Stanford last week. Bradford and fellow Oregon State seniors Andrzej Hughes-Murray and Nous Keobounnam are sixth-year players in the program.