OSU football: Resilient Beavers find a way to a victory
0 Comments
Share this
{{featured_button_text}}
1 of 3 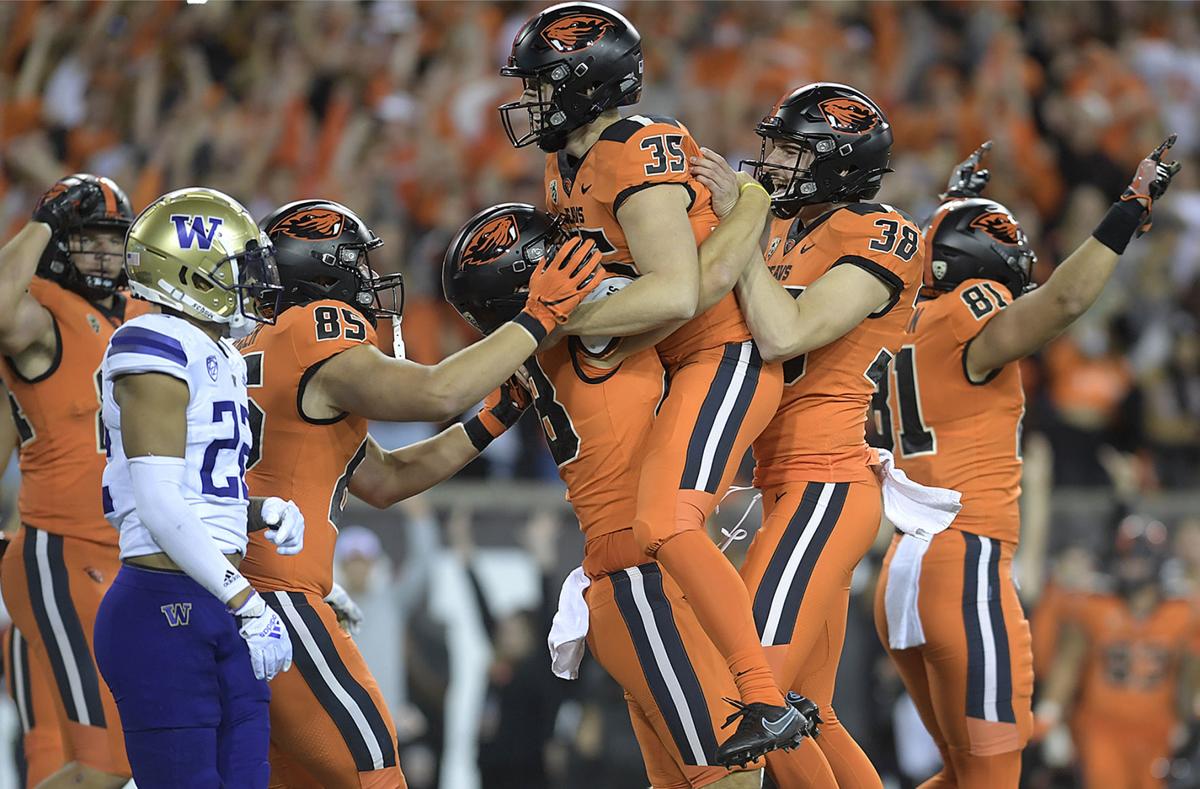 Oregon State long snapper Dylan Black raises kicker Everett Hayes into the air to celebrate Hayes' game-winning field goal on the final kick against  Washington. The Beavers scored the final 10 points of the game to win 27-24. 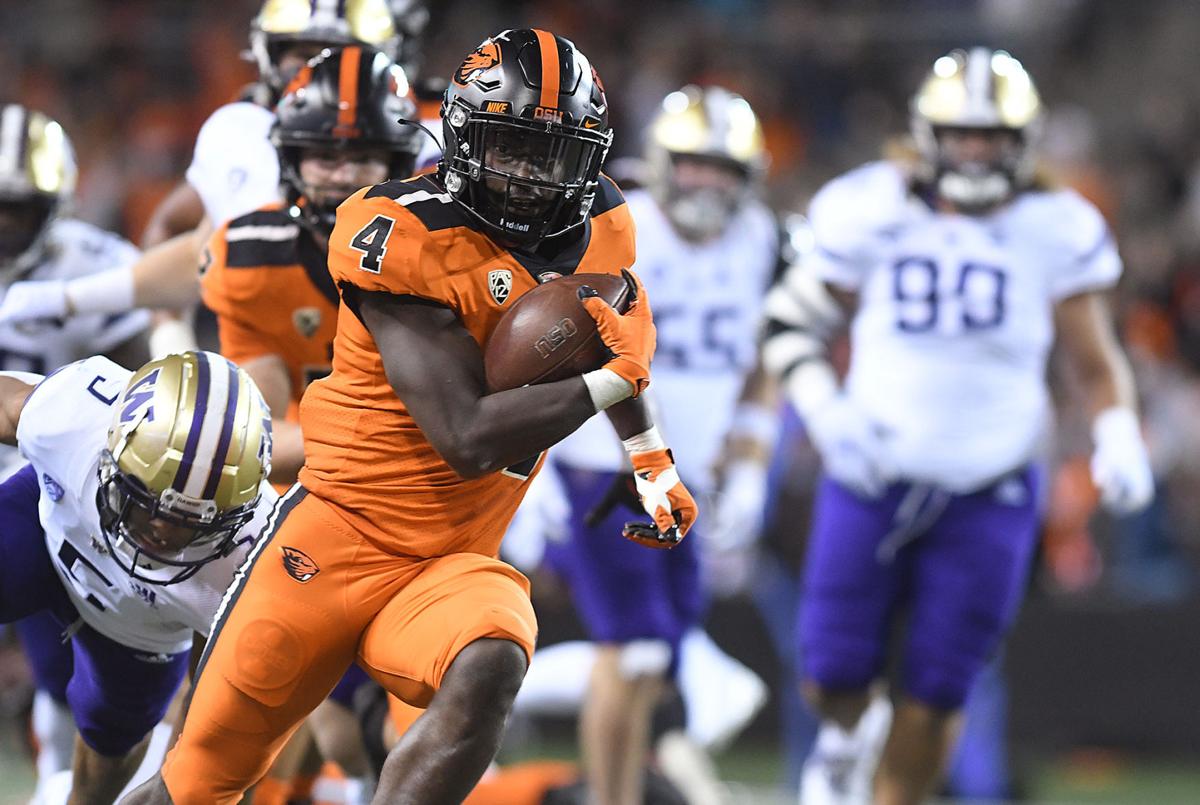 Oregon State running back B.J. Baylor breaks away from Washington's Alex Cook (5) on his way to a fourth-quarter touchdown to tie the game. 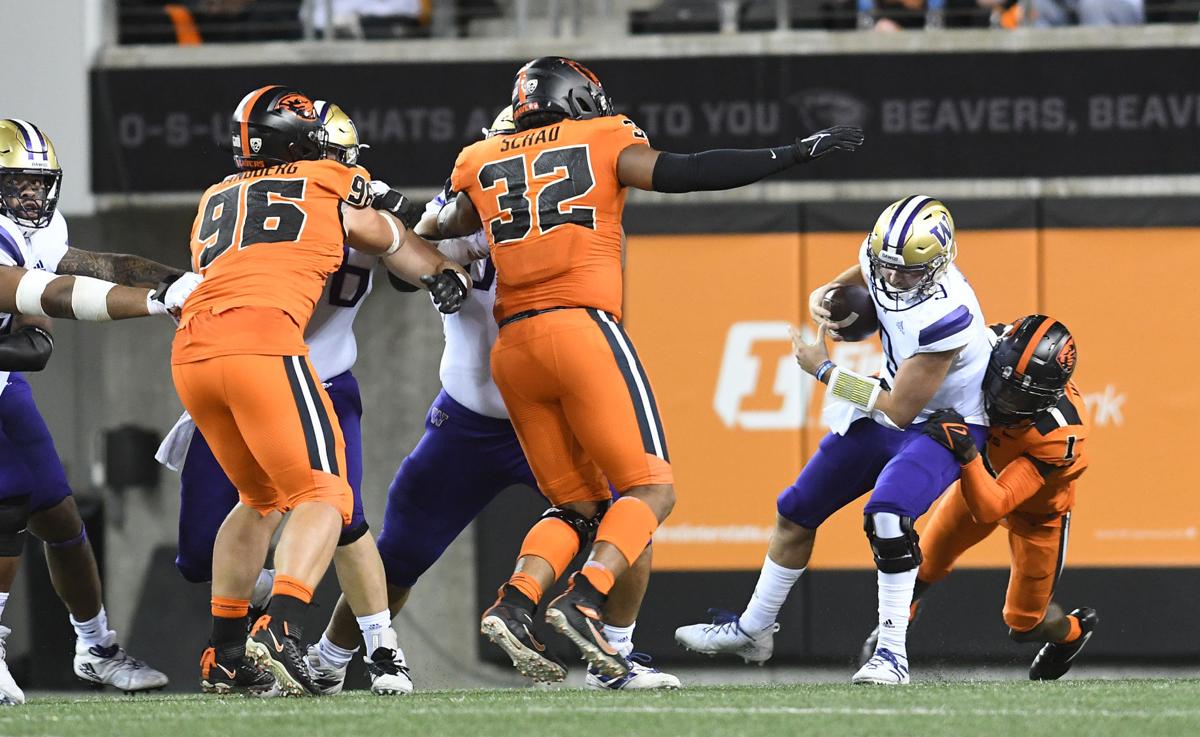 One that had its highs and lows for both sides and required giving everything from the first snap to the last.

Smith admitted that his team didn’t play anything close to perfect, but that didn’t matter when Everett Hayes’ 24-yard field goal went through the uprights as time expired.

Showing that resiliency their coach talked about, the Beavers got to 2-0 in conference play for the first time in eight years with a 27-24 Pac-12 football win against Washington at Reser Stadium.

“I think you can definitely build off of it. It’s a learning experience,” Smith said. “The game’s not exactly going your way. There’s going to be some back and forth and there’s not going to be any quit. Understanding that we’re more than capable of finding a way to win a game when we haven’t played our best.”

The win gave OSU its fourth straight and puts the Beavers alone atop the Pac-12 North Division.

Oregon State (4-1, 2-0) found itself down seven points with about 10 minutes left after Washington (2-3, 1-1) scored two quick touchdowns, the second after the Huskies sacked Beavers quarterback Chance Nolan, recovered the ball and took possession at the OSU 6.

But OSU responded in a hurry, answering with three big plays as part of a six-play, 75-yard drive.

Beavers wide receiver Anthony Gould had a big game in a win against Hawaii three weeks earlier as he took the place of injured teammate Tyjon Lindsey, but otherwise he’s been used sparingly.

Gould was put in the spotlight Saturday with his team behind late, running 19 yards on a sweep then catching a 22-yard pass from Nolan that moved the ball to the Washington 35. Two plays later, B.J. Baylor found a wide-open right side of the field and scored on a 27-yard touchdown run with 6:35 remaining.

“He didn’t bat an eye,” Smith said of Gould sticking with it despite not playing much in recent weeks or in the first half Saturday. “He went back to work and totally was ready. But when his number was called in a critical situation he was ready.”

The Oregon State defense then made its biggest play of the game as Washington faced a fourth-and-1 at its own 46. Defensive back Jaydon Grant and linebacker Semisi Saluni were in the middle of the scrum as Huskies quarterback Dylan Morris pushed forward on a keeper but was stopped short with 3:18 left.

The Beavers’ offensive line then created the necessary holes as it had at times earlier in the game, allowing the ball to be moved well within Hayes’ range.

Baylor ran for 6 and 3 yards and receiver Tre’Shaun 3 more on a sweep. Deshaun Fenwick found room on the ground for 14 and then 12 to the UW 8.

The Beavers ran the clock down to four seconds and brought Hayes onto the field to attempt his first-ever game-winning kick.

"The biggest thing is I trust my preparation. I go through it all the time in practice,” Hayes said afterward, then praised longsnapper Dylan Black and punter Luke Loecher, the holder. “Coach (Jake) Cookus always talks about one-shot, one-kill type mentality. When you go out there you only get one take of it. It’s the biggest thing you’ve got to do is rep it in practice, be comfortable and know that you’re confident.”

Leading 14-10, Oregon State picked up two first downs on the first drive of the second half then pinned Washington at its own 6 with a Loecher punt.

The Beavers defense forced a three-and-out, and the offense drove to the UW 11 before Hayes connected on a 29-yard field goal for a 17-10 lead.

Washington put together a drive late in the third quarter, converting short-yardage plays twice to reach the OSU 45. The Huskies got as far as the 42 but two negative-yardage plays led to a punt.

The visitors got the score back to even, sparked by three big-yardage gains.

Pleasant caught a Morris pass for 18 yards before Sean McGrew ran for 17 and 39 more in the wildcat formation to find the end zone with 10:19 left.

The Huskies then carried the momentum a little further when Faatui Tuitele sacked a scrambling Nolan and poked out the ball, which was picked up by teammate Sam Taimani. Taimani returned it 13 yards to the 6, where McGrew ran it in from on the next play to put the Huskies back in front.

Baylor had 111 yards rushing and two touchdowns on 20 carries and Fenwick 70 yards on 12 attempts.

Nolan was 7-of-15 passing for 48 yards with an interception. Gould was the team’s leading receiver in yardage with 22.

Smith said Nolan struggled with his accuracy and seeing coverage and that the second-half fumble was not a good play. But he also backed up his quarterback.

“The kid responded when we needed an answer. He got in there and made a strike to Anthony (Gould),” Smith said. “Look, he did not have his ‘A’ game, but in the end he found a way to help us win.”

OSU linebacker Avery Roberts had a team-best 16 tackles and a first-half interception.

Cornerback Rejzohn Wright, who had six tackles, a fumble recovery and a sack, said he and his teammates didn’t learn anything they didn’t know about themselves.

Winning a game the way it did Saturday, requiring a resilient effort, can do a lot for the team, Wright said.

“We’ve been working and working and finally got paid for it. Last year we were so close and couldn’t pull through,” he said. “This was the first time we fought to the end and pulled through. Good fourth-quarter fight.”

Andrzej Hughes-Murray is an unquestioned leader of the Oregon State football team.

Oregon State took a giant step up in competition Saturday night at the L.A. Memorial Coliseum and the running game didn’t miss a step.

OSU football: Amid success, team 'locked in' on preparation for Cougars

OSU football: Cougars coming off a strong defensive performance in win at Cal

Oregon State long snapper Dylan Black raises kicker Everett Hayes into the air to celebrate Hayes' game-winning field goal on the final kick against  Washington. The Beavers scored the final 10 points of the game to win 27-24.

Oregon State running back B.J. Baylor breaks away from Washington's Alex Cook (5) on his way to a fourth-quarter touchdown to tie the game.