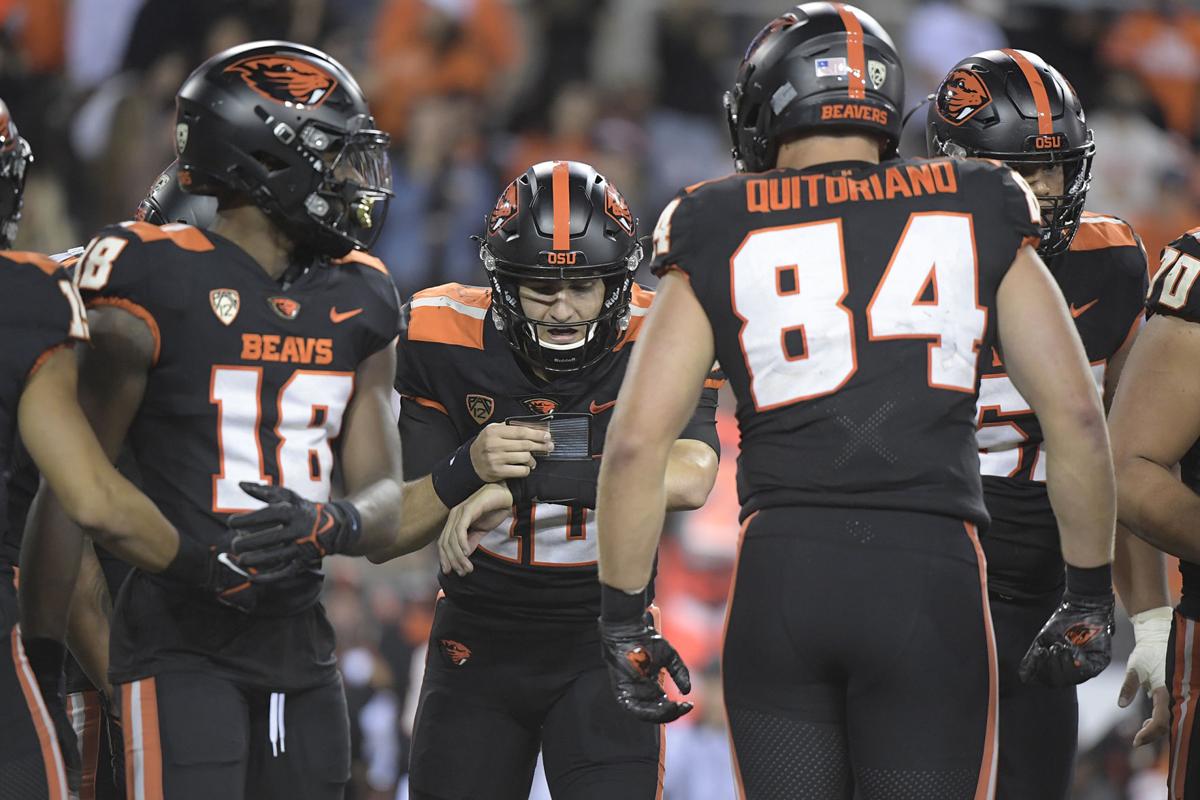 Quarterback Chance Nolan calls a third-quarter play in the huddle against Hawaii. Nolan passed for 302 yards and two touchdowns. 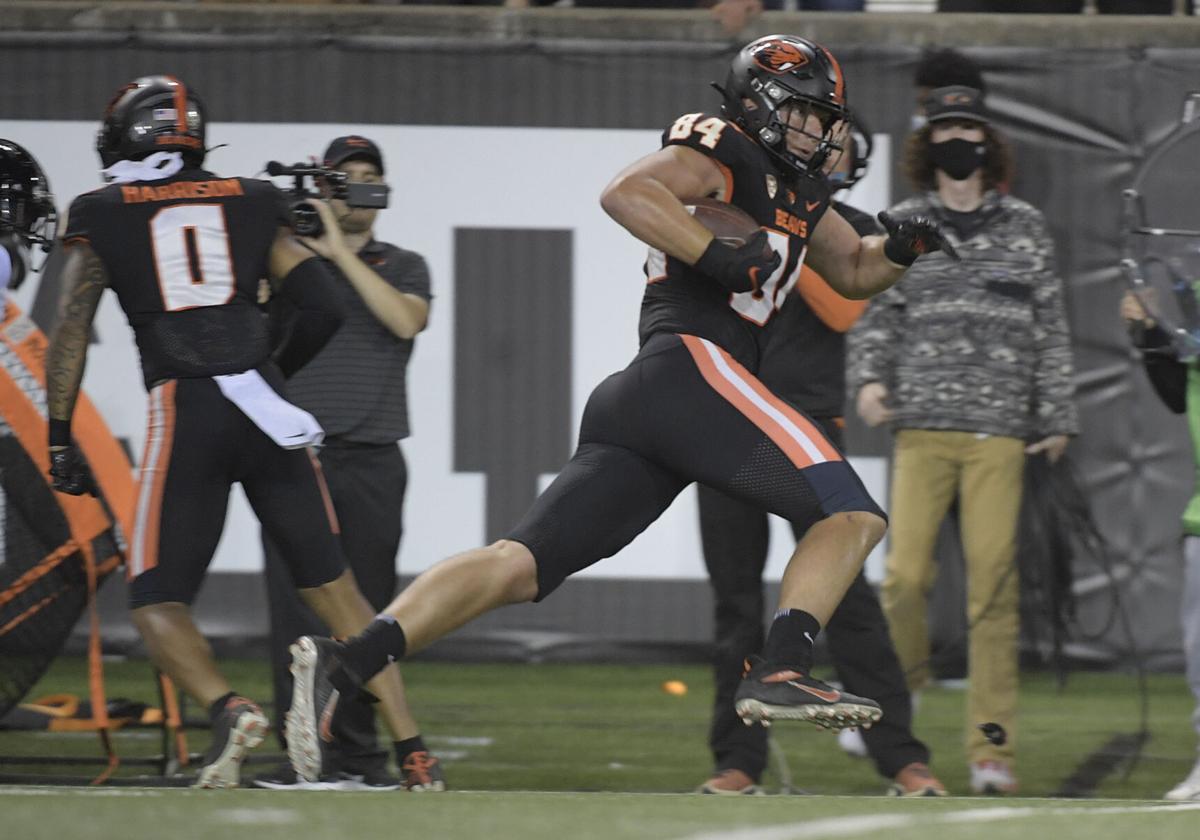 Oregon State's Teagan Quitoriano carries the ball after a catch against Hawaii. Beavers coach Jonathan Smith said the lack of opportunities for the tight ends has been in part due to the success of the wide receivers. 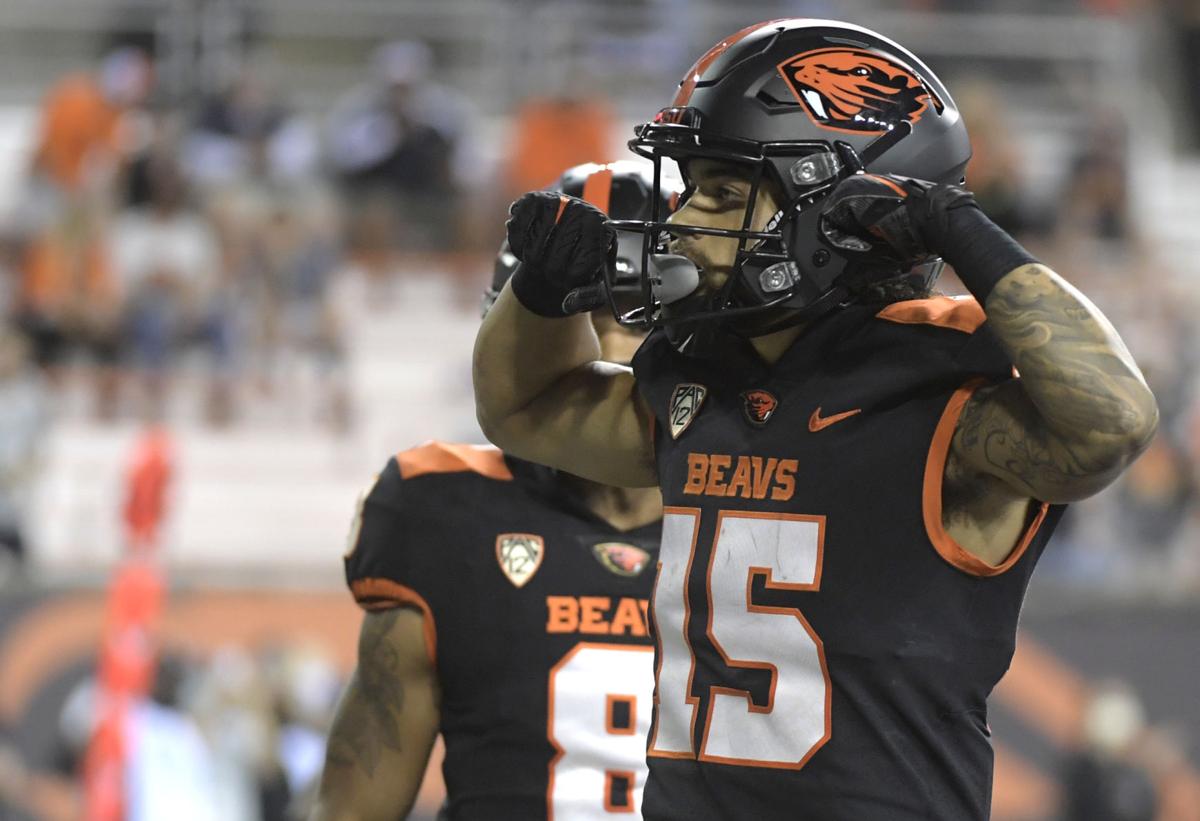 Oregon State wide receiver Anthony Gould had a breakthrough game with seven catches and a touchdown versus Hawaii.

Oregon State coach Jonathan Smith was impressed by what he saw from Chance Nolan after watching film of Saturday’s 45-27 home win against Hawaii.

The redshirt sophomore quarterback completed his first 13 passes, just two short of the school record, on his way to a 21-of-29 performance for 302 yards and two touchdowns with no interceptions. He also rushed for 38 yards on seven carries.

Smith said Nolan, making his first start of the season after playing in relief of Sam Noyer at Purdue, made good decisions, got through his pass progressions well and again showed an ability to gain ground with his legs.

“Overall, there wasn’t much there that … was glaringly, he needs to improve,” Smith told the media Monday afternoon ahead of this coming Saturday’s nonconference home football game with Idaho, noting that there were a couple overthrows on deep passes. “But overall he played really well.”

The Beavers (1-1) jumped ahead 21-0 in the first quarter Saturday and led 24-7 at halftime. Nolan led the offense to two fourth-quarter touchdowns after the Rainbow Warriors (1-2) had closed within 11 points.

Nolan’s performance was a credit to his work ethic and preparation, his coach said.

Nolan started the final three games last season after starter Tristan Gebbia was injured and showed improvement in that stretch.

“But he didn’t bat an eye in regards to his prep this summer, fall camp, knowing there was a competition going on,” Smith said. “He kept plugging away and he was totally prepared for this first start.”

In the backfield along with Nolan, running back B.J. Baylor was up to the task when charged with taking a majority of the carries. He rushed for 171 yards and three touchdowns on 18 totes, and none of his attempts went for negative yardage.

Smith said the redshirt junior did well in picking up rushers in pass protection and played “a complete game.”

But the coach wasn’t ready to declare Baylor the team’s number-one running back going forward. Trey Lowe carried the ball six times for 26 yards and Deshaun Fenwick four times for 8 yards. Baylor had one catch for 9 yards and Lowe one reception for 2 yards.

Where are the tight ends?

Teagan Quitoriano and Luke Musgrave were touted during fall camp as players expected to have significant roles in the OSU offense.

But through two games, the tight ends have been used primarily as blockers. The two have a combined six catches for 79 yards. Saturday, Quitoriano had two catches for 30 yards and Musgrave no catches.

Smith said Monday that the tight end usage so far has been a result of game flow and other factors.

“We’re going to ask them to block for sure,” the coach said. “But just in regards to the pass game and maybe the lack of opportunities for the tight ends, some of that’s been dictated by coverage and our receiver play, which I credit our quarterbacks for going to the open guy and not forcing it to one particular position group.”

The Beavers are deep at wide receiver and that has been proven.

Seven different receivers have receptions this season, led by Trevon Bradford’s 11 receptions for 154 yards. Anthony Gould and Zeriah Beason both had touchdown catches versus Hawaii.

Gould, a West Salem High alum in his third year in the program, had his first collegiate catch against Purdue then busted out Saturday with seven receptions for 119 yards. Six of those catches came in the first half.

The next-man-up mentality played out after Tyjon Lindsey was injured against Purdue and was held out against Hawaii. Gould was ready for his opportunity.

“I thought he was totally ready to play. We have confidence in him,” Smith said.

Brewer gets his chance

Smith said the coaching staff wanted to get Brewer, who redshirted in 2020 in his first year in the program, in the game because he had earned it.

“He played solid. I thought he tried to make it physical,” Smith said, adding that Brewer was called for a penalty on a first-quarter outside zone play. “But for the first time getting in there and going, he played well.”

OSU’s Jack Colletto was named to the Hornung Award weekly honor roll after his performance against Hawaii.

The redshirt junior inside linebacker, who is also used in wildcat quarterback situations, rushed five times for 15 yards and a touchdown and recorded one tackle against Hawaii.

The Hornung Award recognizes two-way players and/or those who play on special teams.

Colletto came into the Oregon State program in 2018 as a quarterback and moved predominantly to the defense in the spring of 2019. But he has repeatedly been used on offense on occasion.

He has rushed for 179 yards and nine touchdowns as a Beaver.

Oregon State came flying out of the gates Saturday night, an effort that escaped the Beavers in their season-opening loss at Purdue.

Although it came against a lower-division opponent, Hawaii showed an ability to score some points in last week’s 49-35 home win against Portla…

Oregon State has picked its starting quarterback for Saturday night’s football home opener against Hawaii, but you might have to wait until ki…

Brandon Kipper muffles the outside noise when it comes to his football team’s performance.

OSU football: Beavers ramp up for Pac-12 play with shutout of Idaho

Oregon State didn’t give Idaho much chance to think about hanging around Saturday afternoon.

Quarterback Chance Nolan calls a third-quarter play in the huddle against Hawaii. Nolan passed for 302 yards and two touchdowns.

Oregon State's Teagan Quitoriano carries the ball after a catch against Hawaii. Beavers coach Jonathan Smith said the lack of opportunities for the tight ends has been in part due to the success of the wide receivers.

Oregon State wide receiver Anthony Gould had a breakthrough game with seven catches and a touchdown versus Hawaii.