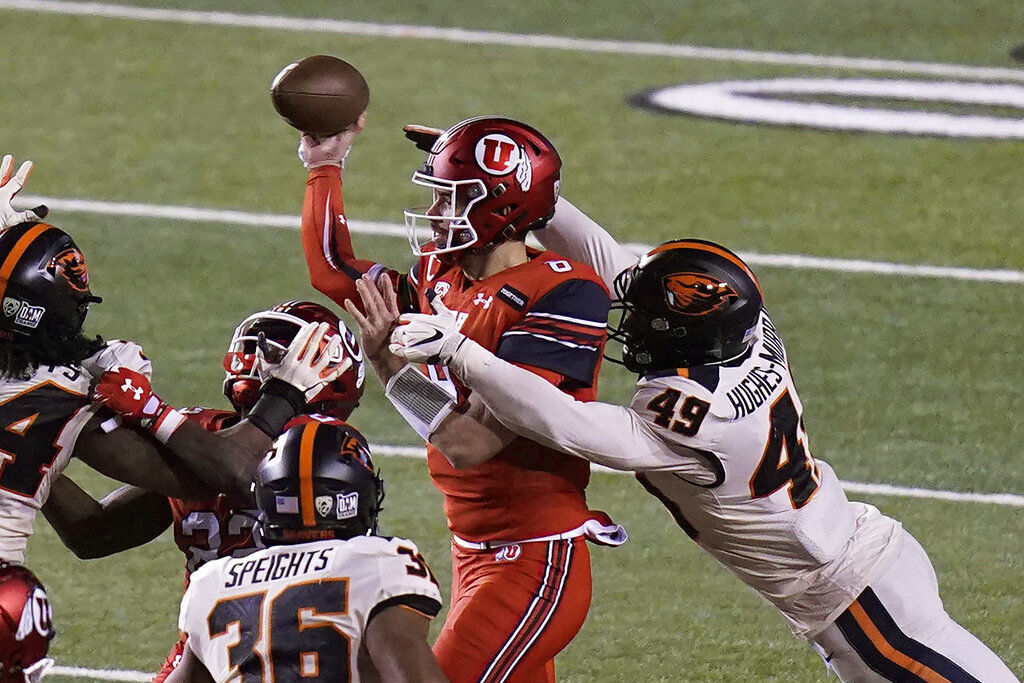 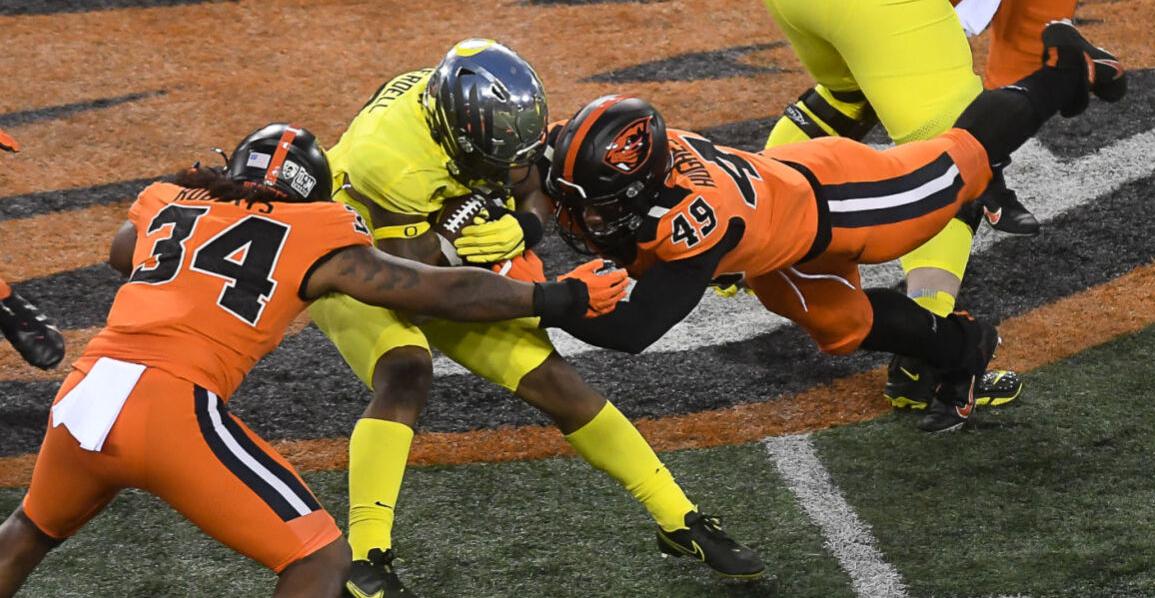 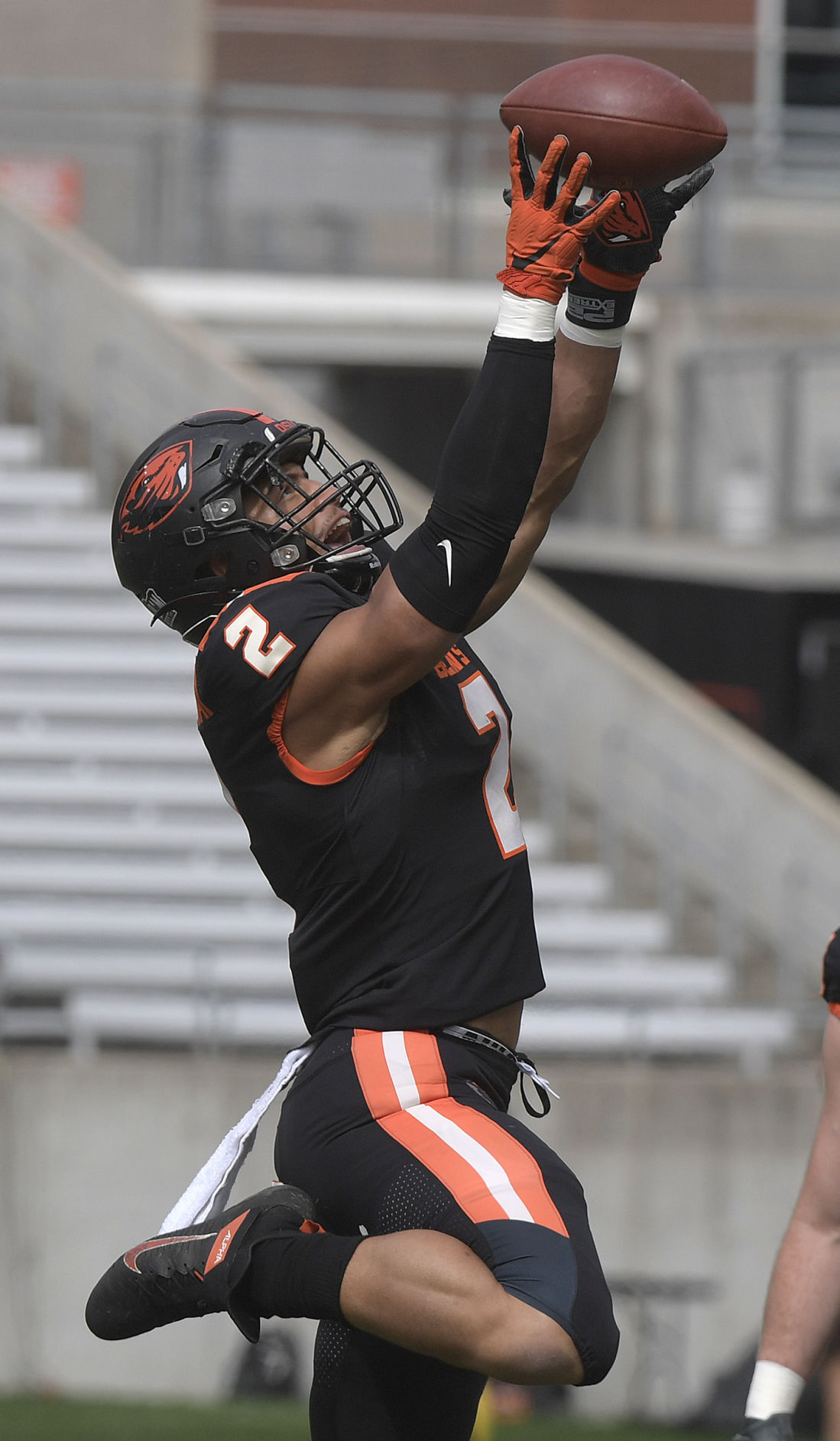 Andrzej Hughes-Murray, sporting his new No. 2 uniform after making the switch from No. 49, goes high for an interception in spring practice.

With a degree in psychology already in hand, he says there’s more to be accomplished on the field, both individually and as a team, as he takes advantage of an extra year of eligibility granted by the NCAA due to the pandemic.

“I thought that I had a lot to build off last year,” Hughes-Murray said. “I just wanted to come back and have another run with this team because I think we can do some great things.”

Oregon State made some positive strides in 2020 despite a 2-5 record, he says, but there’s room for improvement.

A 6-foot-2, 246-pound outside linebacker from Federal Way, Washington, Hughes-Murray bounced back from a 2019 season lost to a serious foot injury in fall camp to make an impact for the Beavers last year.

He recorded 23 tackles and a sack while starting five of the seven games. Of his four tackles for loss on the season, 3.5 were recorded in the home win against Oregon. Fourteen of his 23 tackles came in two games, versus the Ducks and California.

“I’m really rooting for that guy. He’s been through a lot, done some great things for us,” OSU coach Jonathan Smith said. “You talk about the leader that he is on this team, the work ethic, the passion he has for the game. We’re expecting to see big things, not just from his play individually, but his leadership on this group.”

As a senior in 2019, he was named a team captain by his peers after it was learned that he would not play that season. He was selected to the same status again in 2020.

Hughes-Murray, whose first name is pronounced ON-jay, has been around so long that some of his incoming teammates were entering eighth grade when he arrived in Corvallis. He’s heard “grandpa” playfully directed his way a few times.

“You know what? I’m just blessed to be back for another year. Not many are able to say that they’ve been able to do this as long as I have,” he said.

Grant saw what Hughes-Murray did in 2020 and is excited for what comes next.

“It’s really good to have him back,” Grant said. “We’re all expecting big things from Andrzej this year and obviously we’ll turn to him for his leadership like we always have.”

The leadership aspect is something Hughes-Murray has grown into. More of a leader by example, he’s leaned on teammates to expand their leading abilities and it’s led to Smith saying this week that he has as many as a dozen returning players who could be considered for team captain.

“It’s not as easy for me to get out and be super vocal,” Hughes-Murray said. “That’s a role that I’ve really had to take on and embrace and I think it’s worked out well for me and this team.”

His impact has been felt since his true freshman season in 2016, when the three-star recruit joined the Oregon State program after showing his toughness as a Washington 4A wrestling state champion at 220 pounds.

Following an early season injury that kept him on the sidelines in the fall of 2016, Hughes-Murray started four of the six games in which he played after a series of injuries at outside linebacker opened a door. Proving his worth, he had a season-high nine tackles against Stanford and blocked a point-after try versus Washington State.

He played in all 24 games the following two seasons and started 15 contests, including 11 in 2018. He notched a tackle for loss in five straight games that season and had a sack in three consecutive outings.

The foot injury that kept him out of the 2019 season was a setback, but he did his best to stay involved and help in any way he could. He was back to being his normal productive on-field self in 2020.

Junior defensive lineman Isaac Hodgins says Hughes-Murray is “just another leader who’s consistent on the field and the presence in the locker room of, ‘OK, this is another guy with experience.’ He’s been through it all. He’s been through the highs and through the lows. That’s a guy you can respect, who stayed through all that stuff no matter what.”

And he’s ready for more. But fans will notice a difference.

Hughes-Murray has swapped uniform numbers from 49 to 2 to honor an uncle who played football at West Virginia. The uncle was a big factor, along with Hughes-Murray’s father, Jonathan Murray, as to why he got into and stuck with football.

Now, with the injuries in the rear-view mirror and more football to be played, it’s full speed ahead.

“I’m just back to being 100%,” Hughes-Murray said. “Just keep putting good days in front of each other.”

Oregon State wrapped up spring ball last weekend with its scrimmage at Reser Stadium and will now turn its attention toward preparing for fall camp.

Prep wrestling: Steve Thorpe recognized for contributions to the sport

Since the age of 5, Steve Thorpe has been involved in wrestling.

Andrzej Hughes-Murray, sporting his new No. 2 uniform after making the switch from No. 49, goes high for an interception in spring practice.