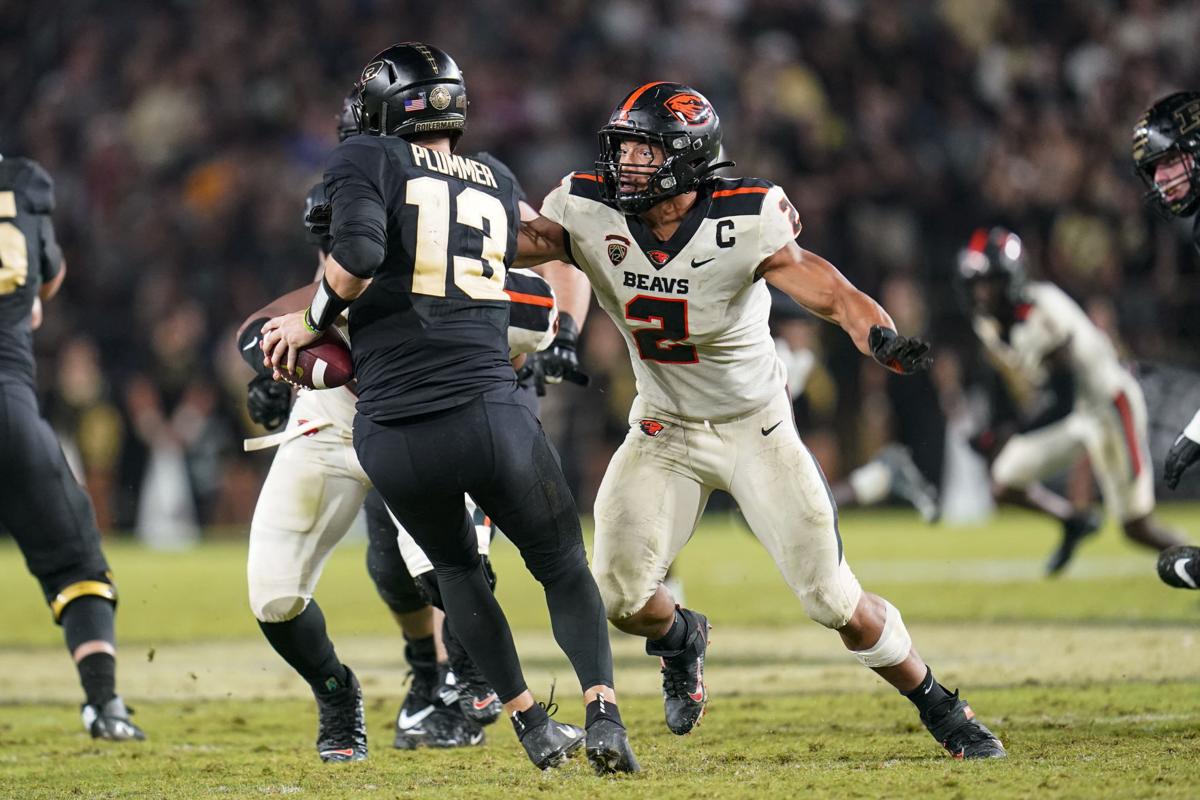 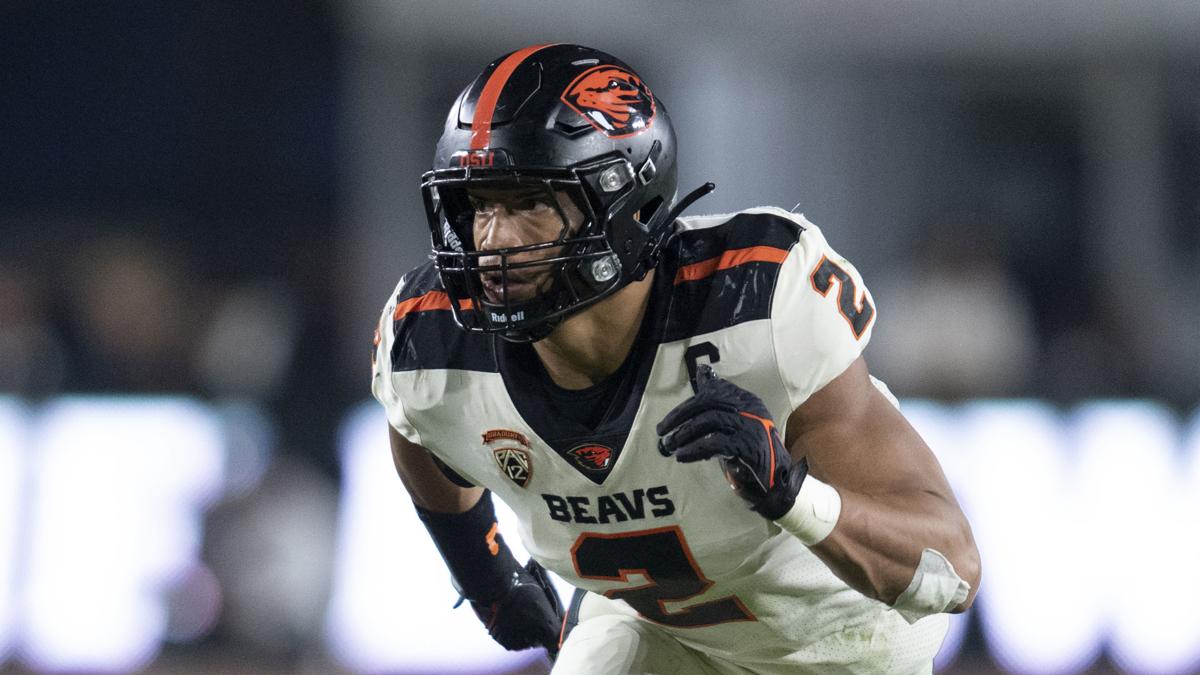 Andrzej Hughes-Murray, an outside linebacker in his sixth season at Oregon State, is a defensive leader for the Beavers.

Andrzej Hughes-Murray is an unquestioned leader of the Oregon State football team.

Just the second three-year captain in program history, the sixth-year outside linebacker motivates and inspires his teammates.

His fourth-quarter sack of USC quarterback Kedon Slovis last Saturday led to the Trojans getting just a field goal and helped the Beavers improve to 3-1 overall in win their Pac-12 opener, 45-27, at L.A. Memorial Coliseum.

“The players all look up to him. As coaches we have a ton of respect for him,” said OSU defensive coordinator Tim Tibesar. “How he goes about his business on a daily basis. How he handles himself in everything he does.”

Saturday, he’ll lead the Beavers as they take on Washington at Reser Stadium and chase a fourth straight victory, something that hasn’t happened in the program since the 2013 team won six straight to go 6-1 on the way to OSU’s last bowl game appearance.

Encouraged by those around him, Hughes-Murray has changed the way he leads, using his voice more and not just his play on the field.

“I went from being more of a lead-by-example type of person to slowly opening up, being a positive light for my teammates,” he said. “Just trying to bring a positive attitude to practice each and every day. Kind of bringing the younger guys along with me.”

His teammates, knowing he’s a leader, urged him to bring his best in practice and step out of his shell and be more vocal. Hughes-Murray says he’s done his best to do that because he doesn’t want to let his team down.

This week, he was named a semifinalist for the William V. Campbell Trophy for a third consecutive season.

Hughes-Murray, who has a degree in psychology, served on a mission in Ecuador to build a school and participated in the Beavers Without Borders program to aid people in Dominican Republic.

He and the Beavers have put themselves in position for a breakthrough season, but they understand it won’t be accomplished without continued improvement.

A product of Federal Way, Washington, just south of Seattle, Hughes-Murray grew up a Huskies fan, but that all changed when he signed with the Beavers. He says Oregon State’s current nine-game losing streak to Washington (2-2, 1-0) doesn’t matter, only this week’s game and working to get better.

The Oregon State defense has made strides since the season-opening 30-21 loss at Purdue.

The defense’s eight interceptions — including three against USC — are second in the conference. OSU forced four turnovers versus the Trojans.

But there’s still areas to clean up.

“Watching the course of the games there’s opportunities to either make a tackle or make an interception that we could have made or play tighter coverage,” Tibesar said. “Some of those things to continue to improve, a lot of it is the little details for each guy at their individual position that we continue to get better at week to week.”

Oregon State safety Kitan Oladapo, a fourth-year veteran, said the defensive success against USC came from being physical and aggressive as well as a determination to stop the run and being sound in tackling. It also helped that the Beavers made the most of their opportunities in turnovers.

“We’ve been practicing all the little details that maybe the last couple years maybe lost us games in the close games we’ve had,” Oladapo said. “Just attention to detail for sure.”

Hughes-Murray says the defensive improvement since the Purdue game has come from across the board, not just a few players.

He believes he and his teammates have been playing good run defense and getting pressure on quarterbacks. But reiterated, “nowhere near where we need to be,” pointing to some missed assignments late in last Saturday’s game that allowed the Trojans to score 10 fourth-quarter points.

Hughes-Murray, having been through many college gridiron battles, points back to work done before the game that leads to victories.

“It’s all about preparation,” he said. “It’s all about getting in the playbook. It’s about coming to practice and watching the film, knowing what you’re going to see.”

Oregon State took a giant step up in competition Saturday night at the L.A. Memorial Coliseum and the running game didn’t miss a step.

Once asked about an opponent’s style in an upcoming fight, former boxer Mike Tyson said, “everybody has a plan until they get punched in the mouth.”

OSU football: Reserves got their feet wet against Idaho

Oregon State beat Hawaii by 18 points, but the margin never allowed the Beavers to go deep in their bench.

The Oregon State women's golf team finished in fifth place at The Molly Collegiate Invitational on Tuesday in Seaside, California.

OSU football: Resilient Beavers find a way to a victory

Oregon State’s four-game winning streak came to an end Saturday afternoon with a 31-24 loss to Washington State in Pullman, Washington.

Andrzej Hughes-Murray, an outside linebacker in his sixth season at Oregon State, is a defensive leader for the Beavers.