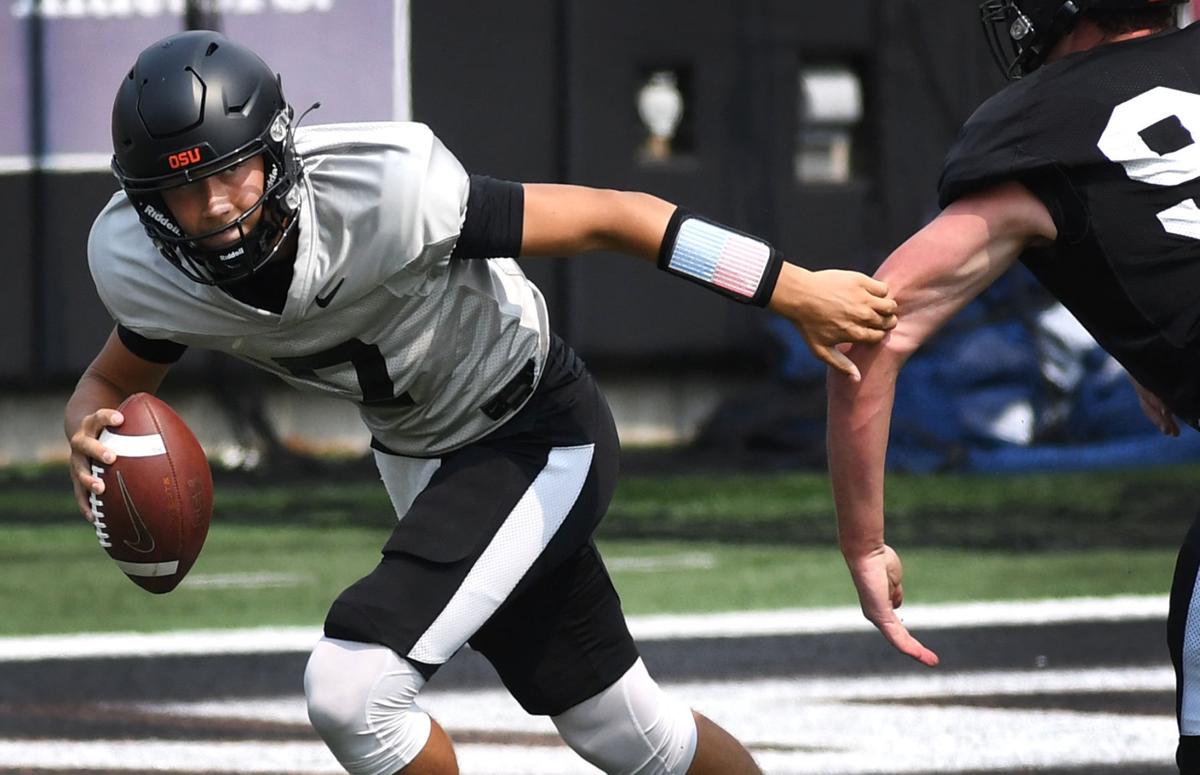 Oregon State quarterback Sam Vidlak tries to escape pressure from defensive lineman Jake Wright during Saturday's scrimmage. Wright, a freshman, knocked down a pass and recorded a sack on consecutive plays. The defense picked off five passes by the Beavers' quarterbacks. 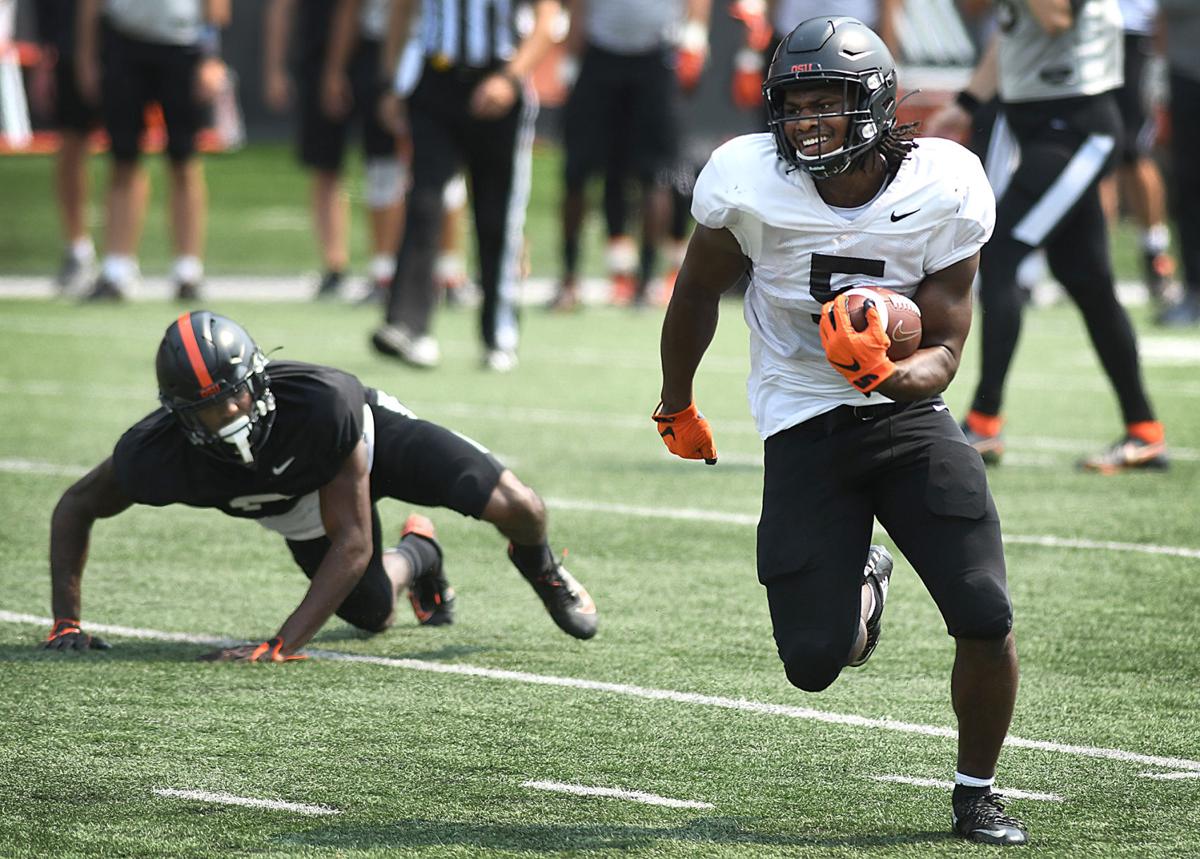 Oregon State running back Deshaun Fenwick races for the end zone after breaking away from teammate Elijah Jones Saturday at Reser stadium. 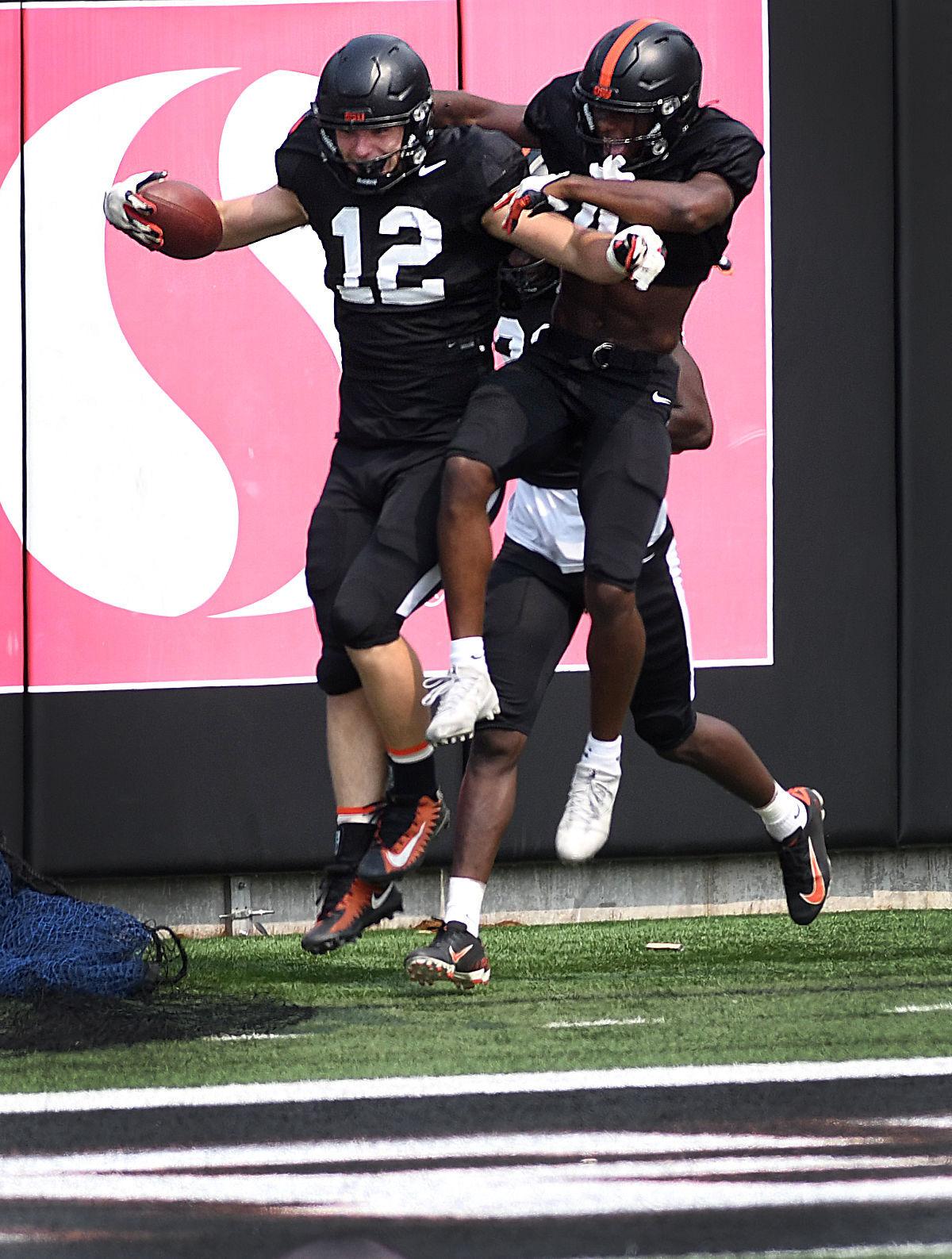 Oregon State inside linebacker Jack Colletto (12) celebrates with a teammate in the end zone after running back an interception for a touchdown. 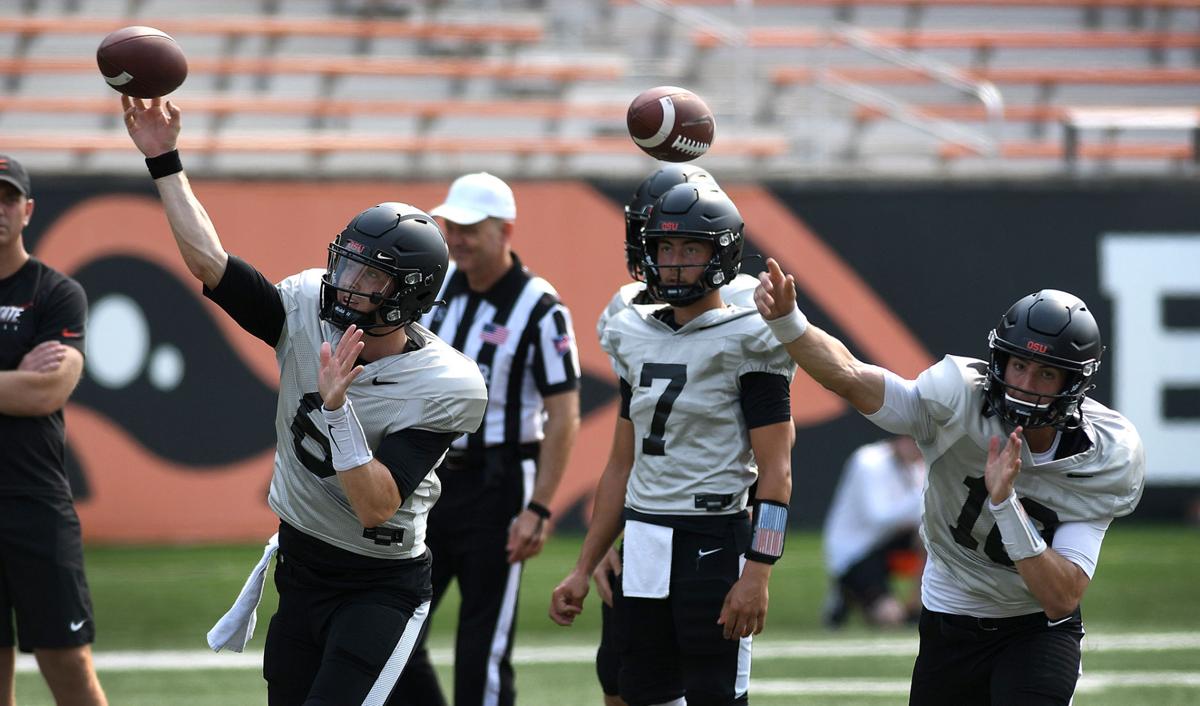 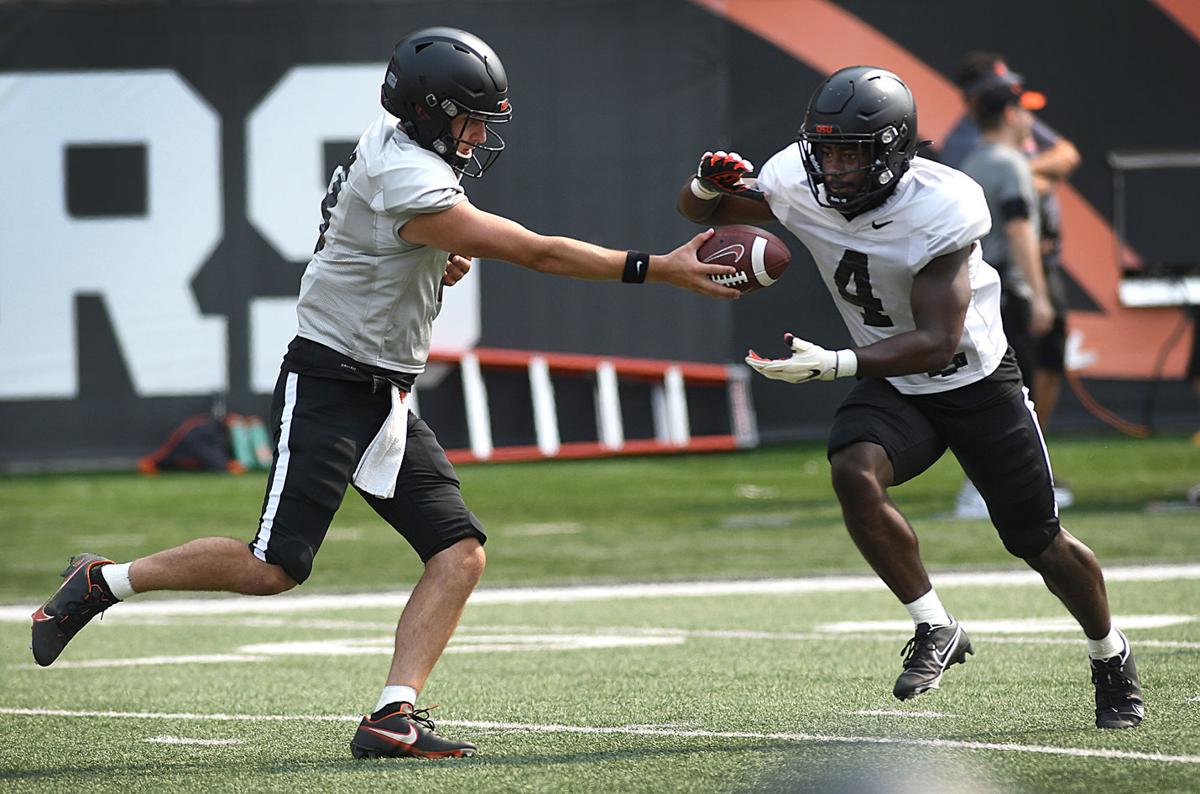 Oregon State quarterback hopefuls Tristan Gebbia hands off the ball to running back B.J. Baylor during drills at the start of practice Saturday morning at Reser stadium.

Oregon State coach Jonathan Smith said in his experience in college football typically the defense is a step or two ahead of the offense in the initial scrimmage of fall camp.

That proved to be the case again Saturday at Reser Stadium.

The Beavers’ offense had some high points but the defense had more of them as the sides faced off for an extended stretch for the first time.

Defenders picked off five passes in all — at least one against each of the four quarterbacks who played — and returned two for touchdowns, while the offense found the end zone three times in the team’s eighth practice.

“It was nice to see the ball get taken away defensively, and that’s something we’ve approached as a program from last year. We’ve got to create some more turnovers. That took place,” Smith said when asked about the goals entering the 90-minute scrimmage and whether those were reached. “The back and forth of tackling then executing offensively at times. There were some good runs, physical play. I liked it a lot.”

Jaden Robinson was one of the defensive stars, as he returned one of his two interceptions 100 yards for a score.

The redshirt sophomore defensive back has seen his unit take a big step forward as a more veteran group compared to last year. He credits that to taking on everything thrown at them by secondary coach Blue Adams. With confidence gained by taking responsibility, Robinson says, comes focus and execution.

“A lot of the old heads in the room, including myself ... Coach Blue, he puts a lot on us, especially our whole DB corps,” Robinson said. “He felt a lot of us would be able to take it and keep moving on. A lot of coaching points, hard coaching points. I feel like the whole DB group together, and Coach, made that happen.”

Linebacker Jack Colletto, who also returned an interception for a score, said the defense came out on top and he believed “that was probably the fastest I’ve seen the defense play.

“Just all across the board, 1s, 2s, 3s, everybody,” he said, “and to see that that early in camp, and if we can build off that, it’s only going to set the tone for the rest of the season.”

Freshman defensive lineman Jake Wright knocked down a pass then on the next play was credited with a sack on the first possession led by quarterback Sam Vidlak.

Tristan Gebbia and Sam Noyer, the apparent front-runners to start at quarterback in the Sept. 4 opener at Purdue, each got five possessions to lead the offense. Sam Vidlak got four tries and Chance Nolan three.

Vidlak’s touchdown came from 30 yards out to freshman wide receiver Jimmy Valsin III, who jumped for the ball and wrestled it away from defensive back Josiah Johnson as they fell to the ground in the end zone.

Smith said afterward that he wasn’t ready to declare Gebbia, last year’s opening-game starter, and Noyer, a graduate transfer from Colorado, the top two candidates for the No. 1 spot.

“Through the first week they’ve gotten the opportunity to go with the first and second group first. But you saw Nolan get in there a little bit and Sam (Vidlak) is still coming along, so no decisions yet,” he said.

BJ Baylor, Damir Collins and Gavin Haines shared a majority of the running back carries and each showed what they could do with room to run and were productive on catches out of the backfield.

Baylor scored on a short touchdown reception on the final play of the scrimmage. The offense got two touchdowns and three field goals out of the red zone to end the day.

Haines said the defense’s strong start rocked the offense, but he liked the execution he saw late.

“I think we locked back in, told ourselves ‘we practice every day, so let’s just lock it and make some plays,’” Haines said, noting the Baylor touchdown and a touchdown pass from Gebbia to tight end Jake Overman. “I feel good about where the offense is heading, that we’re going to be able to make some big-time plays on the Pac-12 stage this year.”

Everett Hayes, OSU’s primary kicker last season, was 4 of 5 on field goals while true freshman Atticus Sappington was 2 of 2.

Oregon State will hold an open scrimmage that’s free to the public next Saturday at Reser Stadium. The event begins at roughly 11 a.m. and gates will open at 10:30. Fans are asked to enter through Gate B on the east side of the stadium.

The Oregon State offense greatly improved its ball security on Saturday during the second open scrimmage of fall camp.

Oregon State quarterback Sam Vidlak tries to escape pressure from defensive lineman Jake Wright during Saturday's scrimmage. Wright, a freshman, knocked down a pass and recorded a sack on consecutive plays. The defense picked off five passes by the Beavers' quarterbacks.

Oregon State running back Deshaun Fenwick races for the end zone after breaking away from teammate Elijah Jones Saturday at Reser stadium.

Oregon State inside linebacker Jack Colletto (12) celebrates with a teammate in the end zone after running back an interception for a touchdown.

Oregon State quarterback hopefuls Tristan Gebbia hands off the ball to running back B.J. Baylor during drills at the start of practice Saturday morning at Reser stadium. 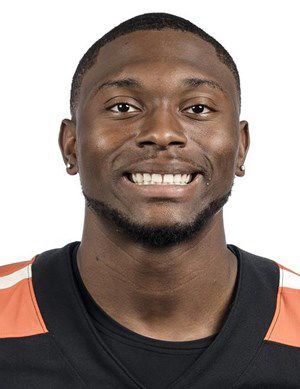