OSU football: Defense looking to make another jump forward this fall
Share this
{{featured_button_text}}
1 of 2 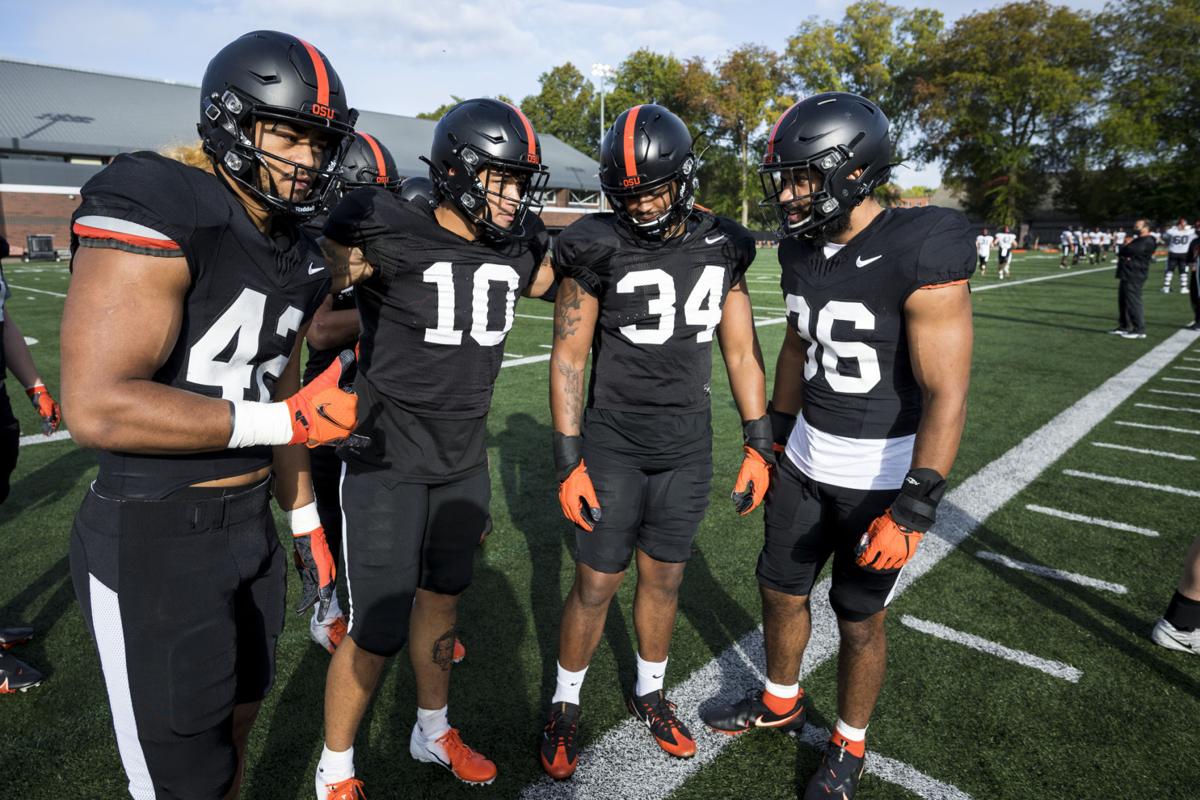 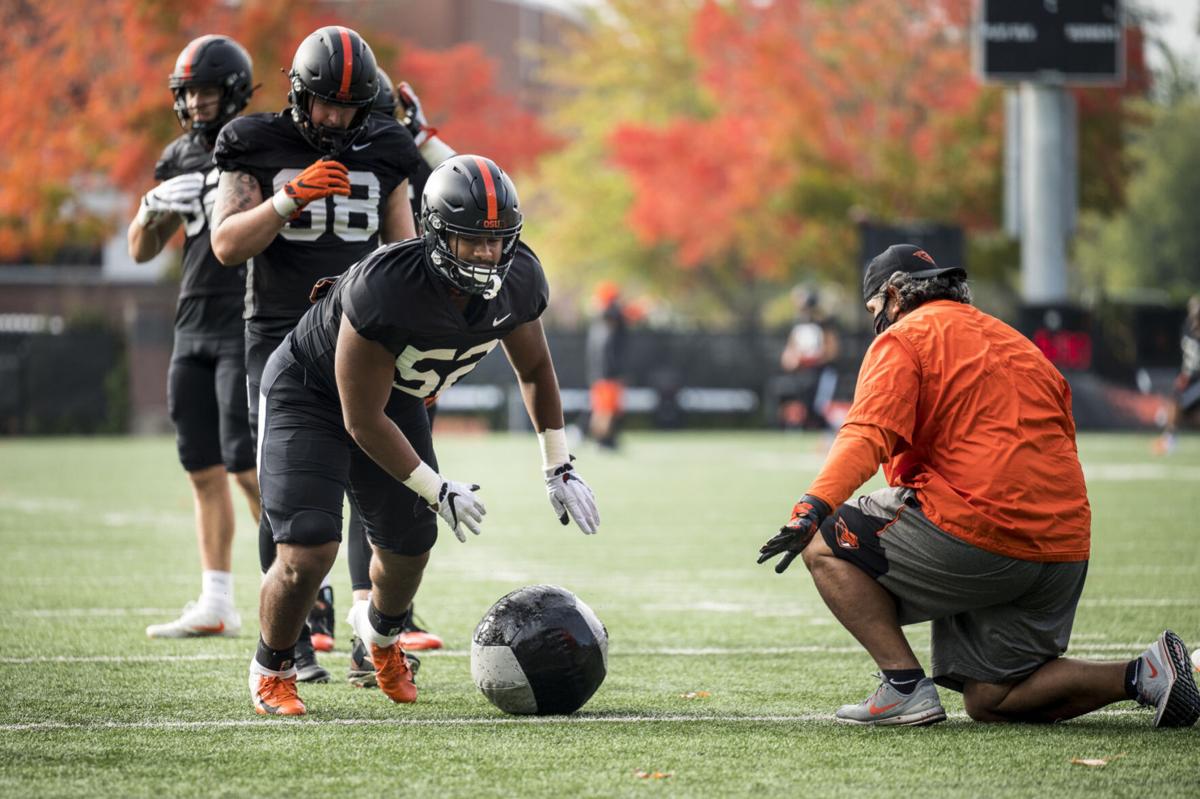 Defensive lineman James Rawls (52) was mentioned by defensive coordinator Tim Tibesar as a player who has stood out in fall practice.

Oregon State made a significant jump forward between years one and two under head coach Jonathan Smith.

That showed out both statistically and in keeping the Beavers in more games.

But what about the third season with the first game now just a few weeks away?

Coaches and players alike point to experience with a large group of veterans returning as a reason why more positive steps can be made, but they say there are other factors as well.

“Our experience and also just being coachable. That’s something that we focused on last year,” junior defensive back Jaydon Grant said after Wednesday’s practice.

He used the example of a mistake being highlighted while watching tape in the position room. The coach is not only talking to that player but everyone else in attendance. Store that mentally and return to the next practice and correct it.

“I would say our experience really helps in that way,” Grant said. “Being coachable and listening to what our coaches say because our coaches always put us in the right position for success.”

David Morris, another junior in the secondary, said a related area is general communication on the field and a desire to improve there as well. That area was lacking at times in 2019, he said.

“So this year, I feel like our communication is off the charts,” Morris said. “I also think that when we do mess up a play, we’re off on the sideline talking about what needs to get fixed.

“From there, it’s one and done. If we make a mistake, we won’t make it again. That’s huge for the defense as a whole. It comes with experience.”

Junior inside linebacker Avery Roberts, one of five returning linebackers with vast experience, led the team in tackles with 83, and 51 of those were in the unassisted category. Inside linebacker Omar Speights as a freshman was second at 73. Junior outside linebacker Hamilcar Rashed Jr. was third at 62, which included 14 sacks and 22.5 total tackles for loss in his breakout season that ended with numerous All-American awards.

In all, OSU returns six of its top tacklers, its sacks leader in Rashed and its top two interceptors in Nahshon Wright (three) and Grant (two) from 2019.

“It’s another year under the system. A lot of guys got older,” said outside linebacker Addison Gumbs, who was limited to two games last fall due to injury. “We didn’t really lose a whole lot of players on defense and we got a lot of new guys coming in. Guys who played last year really stepping up and filling their roles. So I’m really excited about us this year.”

The Beavers are particularly deep at linebacker, led by Rashed and Roberts, plus John McCartan and Riley Sharp outside and Speights and Doug Taumoelau inside, who all got a lot of playing time last year.

Defensive coordinator Tim Tibesar said Wednesday that inside linebackers Jack Colletto and Kyrei Fisher have stood out at practice so far, in addition to Speights and Taumoelau. He also singled out defensive lineman James Rawls and outside linebacker Isaac Garcia, now in his second season after a move from up front.

“There’s a reason they say experience counts,” Tibesar said. “To have been there and done that before it makes it that much easier for you to do it. So certainly having that depth and experience at the linebacker position is a strength for us.”

Tibesar said he’s seen the “positive growth” and development of the players in their third year under the same system and using the same terminology. In that time, depth has been created and led to a battle for positions on the practice field.

“So there’s a real sense of competition at every position,” the coach said. “Nobody can go out there and just kind of rest on what they’ve done in the past. They have to go out there and earn their spot every day in practice, which will make us better as a defense every single day.”

Oregon State’s offensive is a bit of an unsolved puzzle at this point.

OSU football: Onesimus Clarke will reportedly opt out of 2020 season

Oregon State has had its first player opt out of the 2020 football season.

Saturday will be a big step for Jonathan Smith and his staff as they evaluate the Oregon State roster in the early part of the season.

Until any of Jonathan Smith’s quarterbacks emerge as the clear frontrunner for the starting spot, he isn’t going to limit his options at the p…

Hamilcar Rashed Jr. thinks teammate Jack Colletto might have a leg up in joining the defense after playing quarterback.

Hamilcar Rashed Jr. put up lots of eye-catching defensive numbers in 2019, particularly quarterback sacks and other tackles for loss.

Defensive lineman James Rawls (52) was mentioned by defensive coordinator Tim Tibesar as a player who has stood out in fall practice.