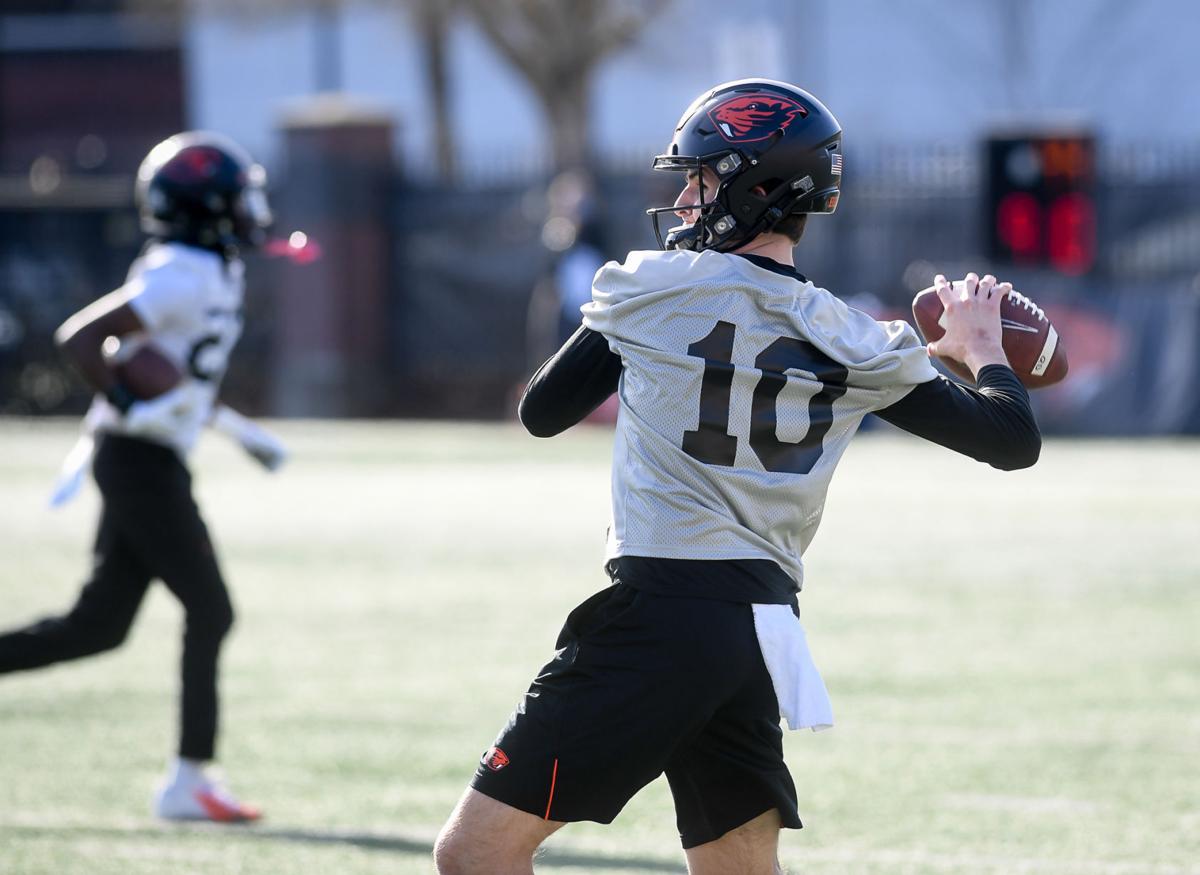 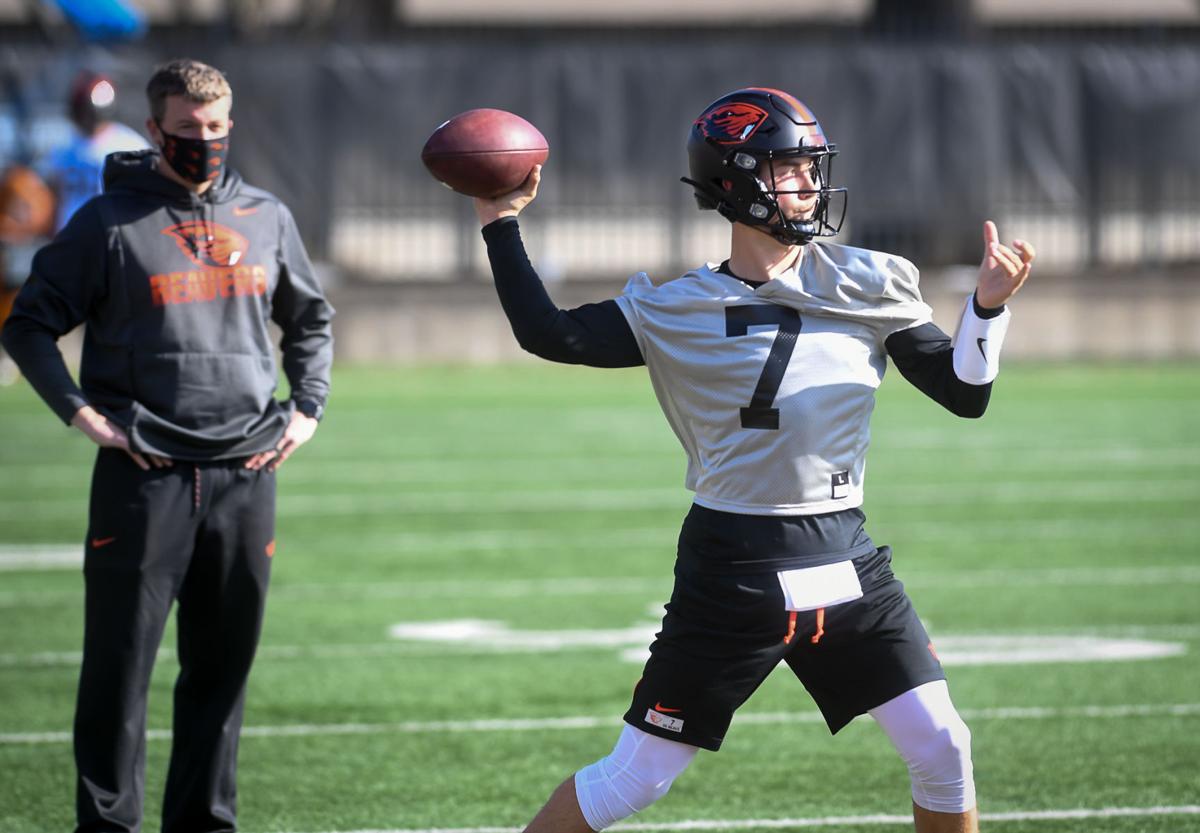 Oregon State freshman Sam Vidlak flashed a strong arm as his first practice as a Beaver on Tuesday.

During his debut season with the Oregon State football program, Chance Nolan flashed dazzling athleticism and looked like he could be the Beavers’ long-term answer at quarterback.

But he also faced the ups and downs that most young signal callers do in the Pac-12, and struggled at times with the speed and physicality of the game. So in the three-and-a-half months since Oregon State’s 2020 season finale, Nolan has worked to adapt his game from both a physical and mechanical standpoint.

With one day of spring practice in the books, he and Oregon State’s coaching staff are happy with the early return.

“I thought he did a pretty good job in the weight room," offensive coordinator Brian Lindgren said. "Our strength guys really had the last three months with him, and he added a little bit of weight and strength. He had a little bit more zip on the ball today. In terms of durability, I think this will help him moving forward this season.”

Nolan will enter the spring with a leg up in the starting quarterback competition, as last year’s Week 1 starter, Tristan Gebbia, is still sidelined with a knee injury. With Gebbia out, that leaves Nolan, freshman Ben Gulbranson and incoming freshman Sam Vidlak as the only three active quarterbacks at the moment.

All three had nice moments during the 7-on-7 portions of Tuesday’s practice, and Lindgren pointed out that the lack of current depth under center could be a blessing in disguise.

“I’m fired up for when we can get into the crossover periods with our defense,” Lindgren said. “All those guys are getting a lot of reps. We’re pretty excited about the three of them, so there’s some definite positives to it. As we get into fall camp, we’ll be adding a couple more bodies.”

The more difficult portion of that improvement process for the sophomore may have been actually gaining the weight. Nolan stands 6-foot-3 with a wiry build, and is listed at 201 pounds on the roster the Beavers released Monday — around six pounds heavier than his playing weight at Saddleback College before he transferred to Oregon State.

“You’ve gotta get on the clean weight — you’ve got to eat right,” Nolan said. “Nutrition is a huge thing. Our nutrition guys have been talking to me about that stuff; to maintain it, you’ve got to eat meals, and that’s kind of my big thing is just eating meals. Just keep eating and working out — I should be good.”

That included an overhaul of his diet to make sure the weight stays on, which has been somewhat of a challenge. Nolan jokes there were times when he asked himself why he couldn’t gain weight.

But he believes he’s bulked up enough to help him sustain the beating that comes with playing the position without having to sacrifice any of the speed that made him so electric last season.

“I think he’s gotten stronger,” Lindgren said. “He was able to study, and he learned a ton from those three games that he did play, with what it takes to be successful at that position and all the work that goes into it in preparation for each game and preparation for the offseason. I think it was a little bit eye-opening for him getting to start those three games, like, I’ve really got to be on top of it. It takes a lot of work to be successful playing quarterback in the Pac-12. I think that was an awesome experience for him.”

Vidlak has been on campus and working out since winter term, and is now facing the same steep learning curve that Nolan and Gulbranson faced when they arrived in Corvallis.

A three-star recruit out of Hidden Valley High in southern Oregon, Vidlak soared up the recruiting rankings after his junior year and is one of a handful of the Beavers’ early enrollees involved in spring practices.

“He went out there and completed his first practice," Lindgren said. “He made some throws and some good plays, and there were a ton of learning opportunities for him. I just kind of challenged him, ‘Hey man, try to digest and learn as much as you can from this film.’ We’re excited about him, and it was really good to see that arm strength. That’s something we saw when we recruited him.”

Gulbranson is another freshman with a big arm, and he has worked to make some of the same mechanical fixes that Nolan did after the 2020 season.

“One of the things we talked about was quickening up his feet,” Lindgren said. “Last year, there were a lot of times when his mind was making the right decision, but he was just a little bit slow getting the ball out or slow getting his body in a position to make the throw. So that’s something that we challenged him about. … You can tell already that he’s definitely improved from where he was three months ago."

OSU football: Veteran Beavers’ defense ready to ‘show what we can do’

Oregon State’s players are tired of constantly being asked when the defense is going to ‘make the leap.’

OSU football: With first week of spring ball in the books, Beavers ramp up toward scrimmage

Throughout the first few days of spring practice, Oregon State football  coach Jonathan Smith and his staff were honed in on making sure the B…

One of the biggest indicators of the progress Oregon State has made over the past 12 months is its situation along the offensive line this spring.

OSU football: Deshaun Fenwick settling in quickly as he battles for starting running back spot

Deshaun Fenwick admits that Corvallis is nothing like home.

Oregon State freshman Sam Vidlak flashed a strong arm as his first practice as a Beaver on Tuesday.