OSU women's basketball: Beavers try to remain positive despite disruptions to season
Share this
{{featured_button_text}}
1 of 2 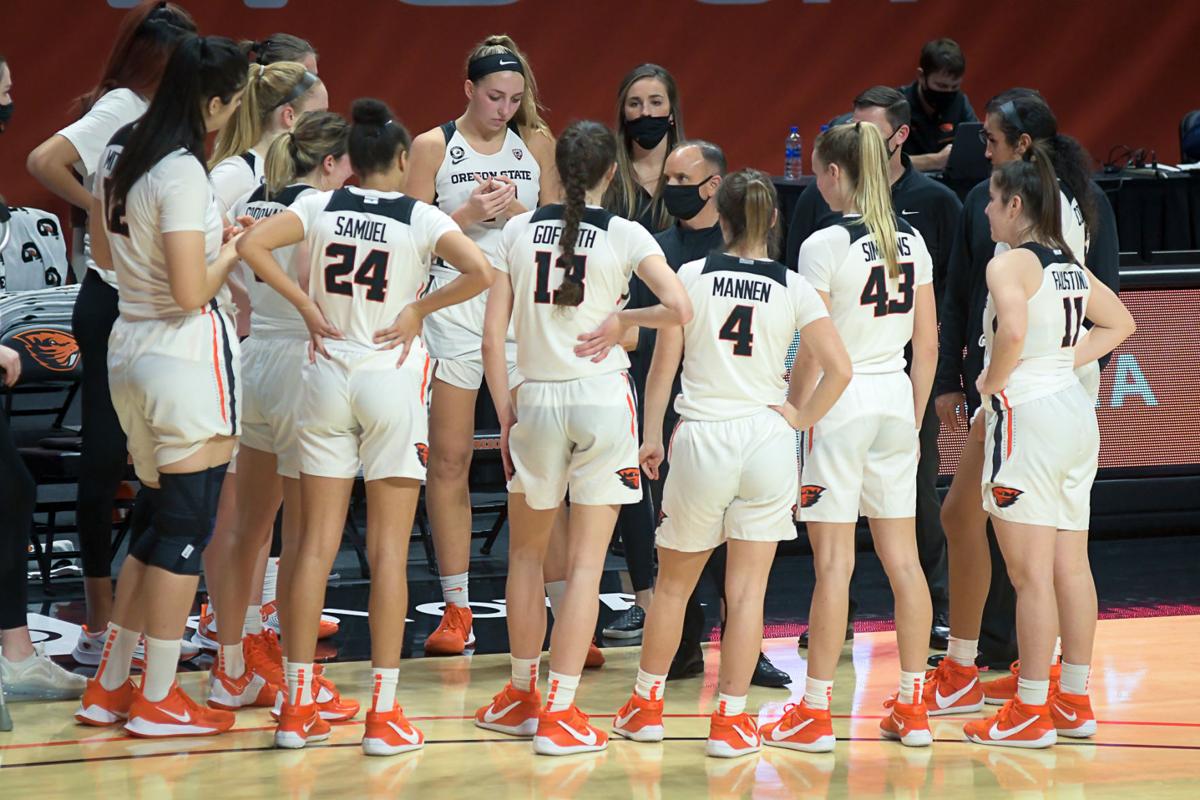 Oregon State has endured two separate pauses and has missed out on eight games so far due to postponements this season. 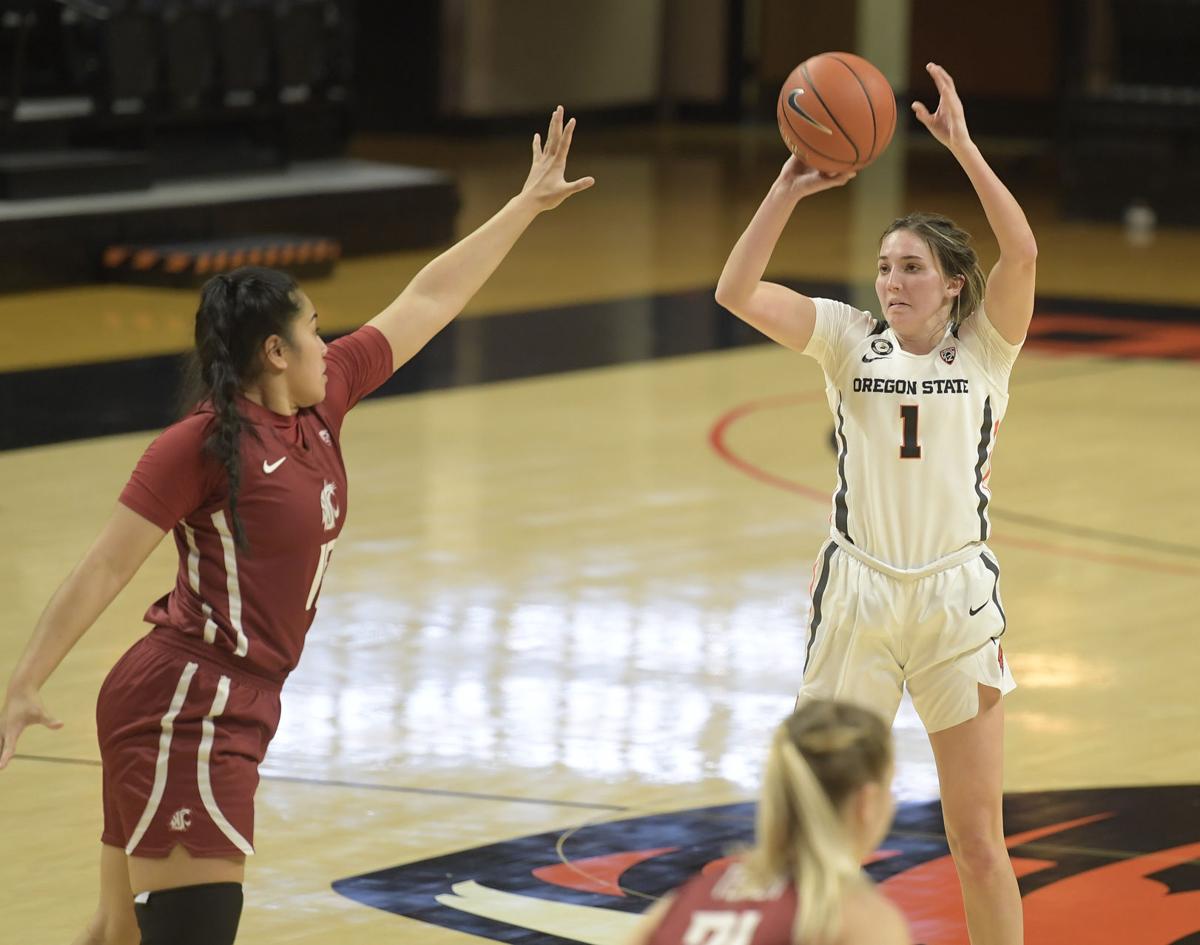 Oregon State guard Aleah Goodman has led by example on and off the court for the Beavers through a trying 2020-21 campaign.

Heading into the 2020-21 women’s college basketball season, most players and coaches expected to be faced with some ups and downs in regard to the pandemic.

They knew that, inevitably, games would be postponed or canceled and that many programs would need to take a pause because of a positive COVID-19 test inside the program.

It was a topic of conversation around the country, including at Oregon State.

“I told the team at the beginning of the season kind of knowing that there's a possibility of going through some rough patches and having some hard hits, or taking some hard hits,” senior Aleah Goodman said. “I told them the strong’s going to survive this season. And that's what it is at the end of the day. If your team can stick together, stay strong, and just at the core do things right, we'll survive whatever we face. Whatever we have to go through, we're gonna be OK and we're gonna come through at the end of the day.”

The Beavers also talked about how it would be easy to make excuses for what transpired on or off the court.

But that was not going to be the case.

“Why, what's the point in that, what does that do for you?” coach Scott Rueck explained. “And so that's how this team has approached every single day — where we could feel sorry for ourselves, we haven't played as many games as them, all this stuff. They've chosen not to and I've been so impressed by them through that.”

It certainly hasn’t been easy as the Beavers have now twice gone through a pause that has cost them eight total games heading into Saturday night’s home battle with No. 5 Stanford.

The first pause lasted four full weeks and postponed seven (one was made up) games. They returned for five games, winning the last three to give them the feeling of finally turning the season around, before another pause wiped out last weekend’s home games against the Arizona schools.

"I mean obviously it's a little difficult just because it does feel like we kind of start getting on a roll and then something else is thrown at us which is hard,” Goodman said. “It's hard to feel like you're kind of getting the groove of things and then hey we’re another pause.”

Saturday's is the only one this weekend as the game against California was postponed while the Golden Bears deal with injury issues.

That prior experience has made the players understand even more how important it is to take advantage of every chance to play.

“Going through it the second time, it's kind of like, hey, we really can't take any opportunity for granted, just because it can happen again,” Goodman said. “We're seeing that this year that there's just been so many different obstacles thrown our way. But just taking every opportunity and just kind of going with it.”

Can they come close to duplicating that again after two weeks away?

“I think it's definitely possible to kind of start again where we left off two weeks ago,” Goodman said Thursday. “I know we're gonna have a great couple practices coming up getting ready for Stanford. But I'm really excited and just this whole program and the players especially just seem really motivated to kind of get back going again. I know everyone's really excited.”

That positive attitude has not wavered despite enduring a five-game losing streak and two pauses for the better part of six weeks of the season.

“That's to me one of the most remarkable things about this entire year is how this team's just maintained the positivity throughout it and it's been a frustrating stretch, obviously. For months now it's been frustrating,” Rueck said. “We live in an area that's so lightly impacted by the pandemic in comparison to many other areas, yet this program has been hit probably the hardest by delays and pauses and missed games.

“Through it all, though, we've practiced well, they condition well, they come in every day with a great attitude and they just want to have fun playing the game they love getting better. So that mindset has continued and I have no reason to believe that we're not going to approach this game plan to win with everything we have.”

While it hasn't been easy, Goodman, the lone senior with experience in the program, has tried her best to be a leader by example to her teammates in terms of being cognizant of her attitude.

"If I respond to something negatively, or if I respond to something by complaining, then that's what they're going to do so," Goodman said. "If I can respond positive and just, I don't know, at some point just laugh some things off because it's like, hey, it is what it is. And then that kind of eases them, relaxes them and if they see that I'm doing OK with all this, then they're going to be OK as well."

Oregon State closed out a tough four-game stretch in eight days with a road win at Utah on Sunday as Aleah Goodman had 21 points and Sasha Goforth 16 points and 10 rebounds.

Just imagine what Talia von Oelhoffen could be capable of doing once she gets up to full speed with the Oregon State women’s basketball program.

OSU women's basketball: Cardinal dominate the final 15 minutes to run away from Beavers

For the better part of 25 minutes, the Oregon State women’s basketball team went toe-to-toe with the No. 5 team in the country.

In the latest bracketology projections by ESPN’s Charlie Crème, the Oregon State women’s basketball team is in the “next four out” category fo…

Oregon State is getting plenty of contributions from its underclassmen, making for a potentially bright future for the Beavers.

Oregon State has endured two separate pauses and has missed out on eight games so far due to postponements this season.

Oregon State guard Aleah Goodman has led by example on and off the court for the Beavers through a trying 2020-21 campaign.