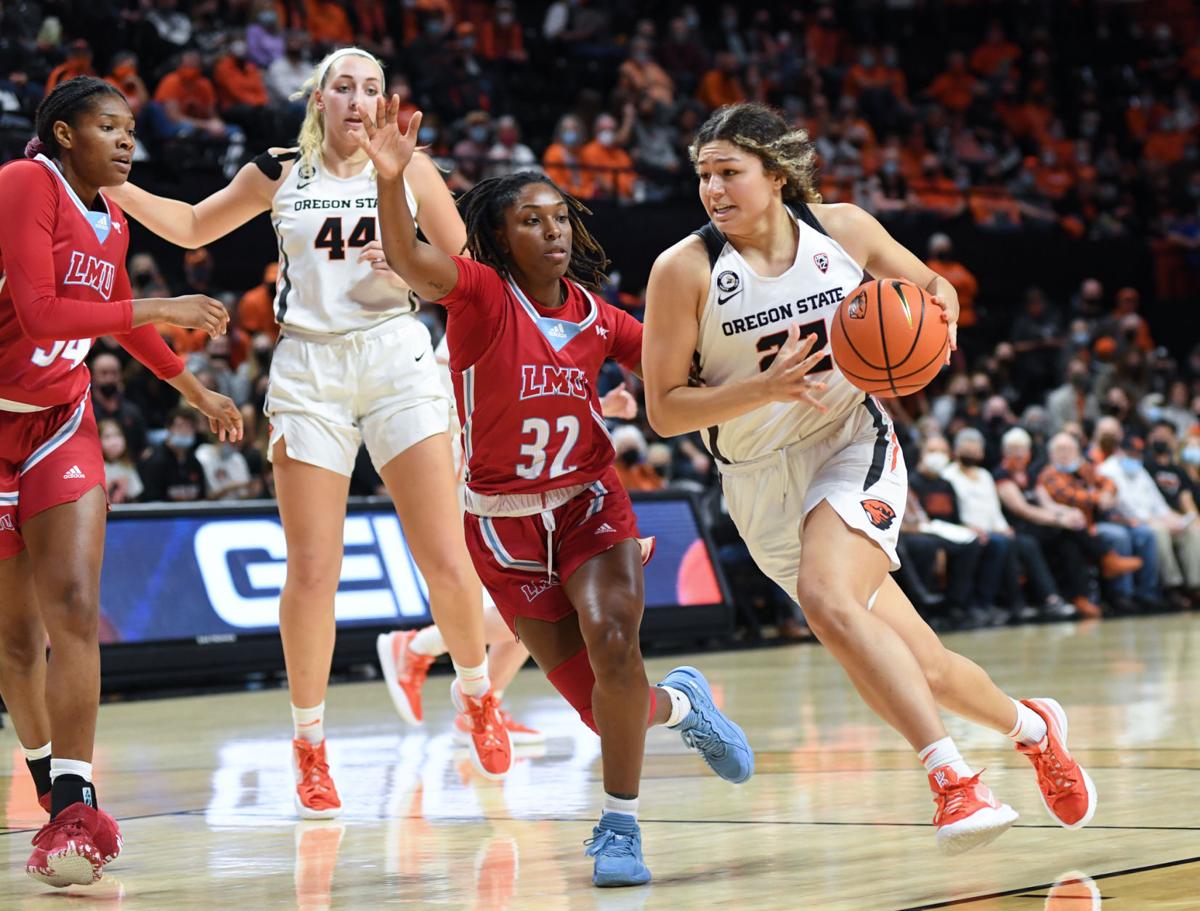 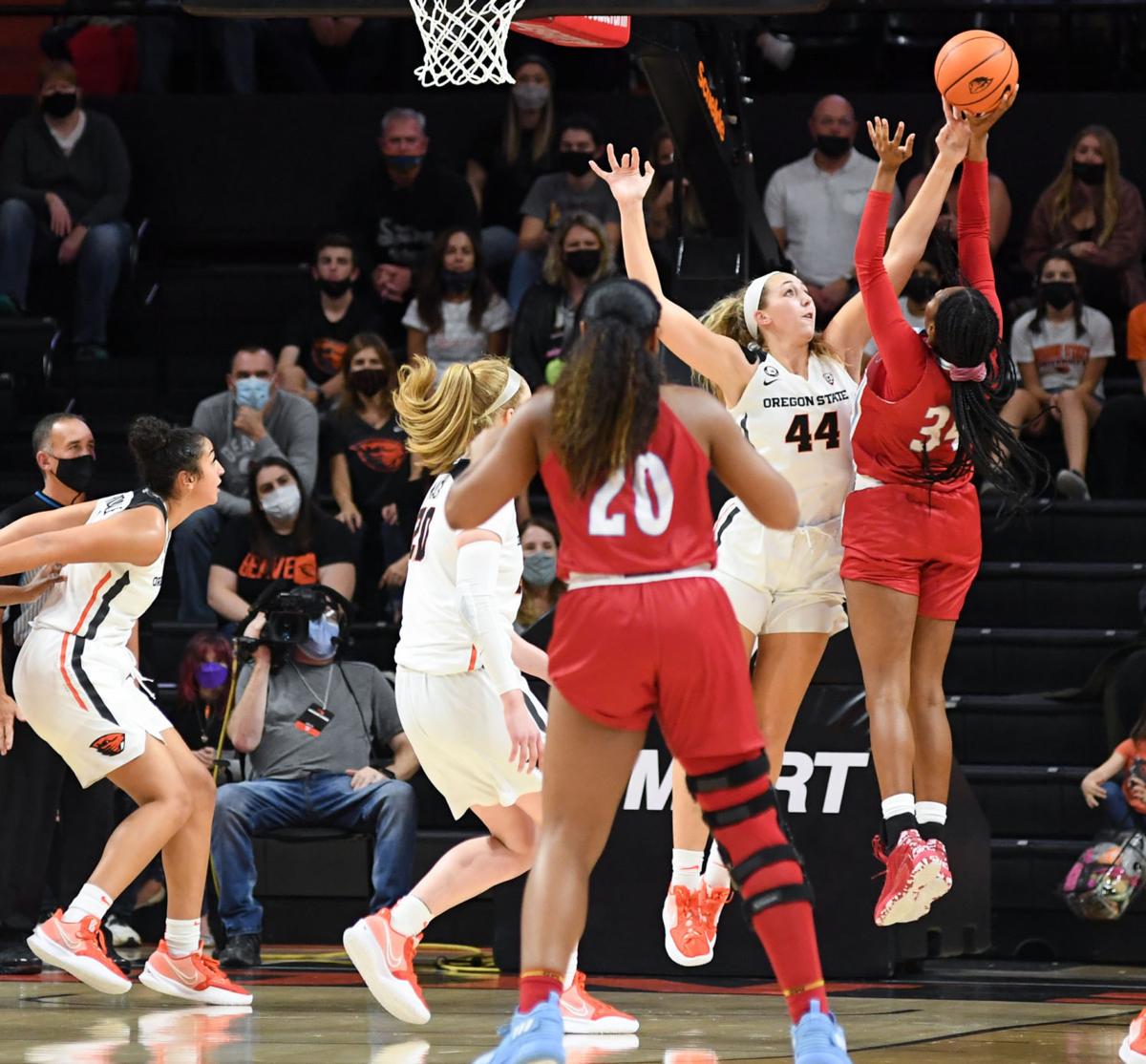 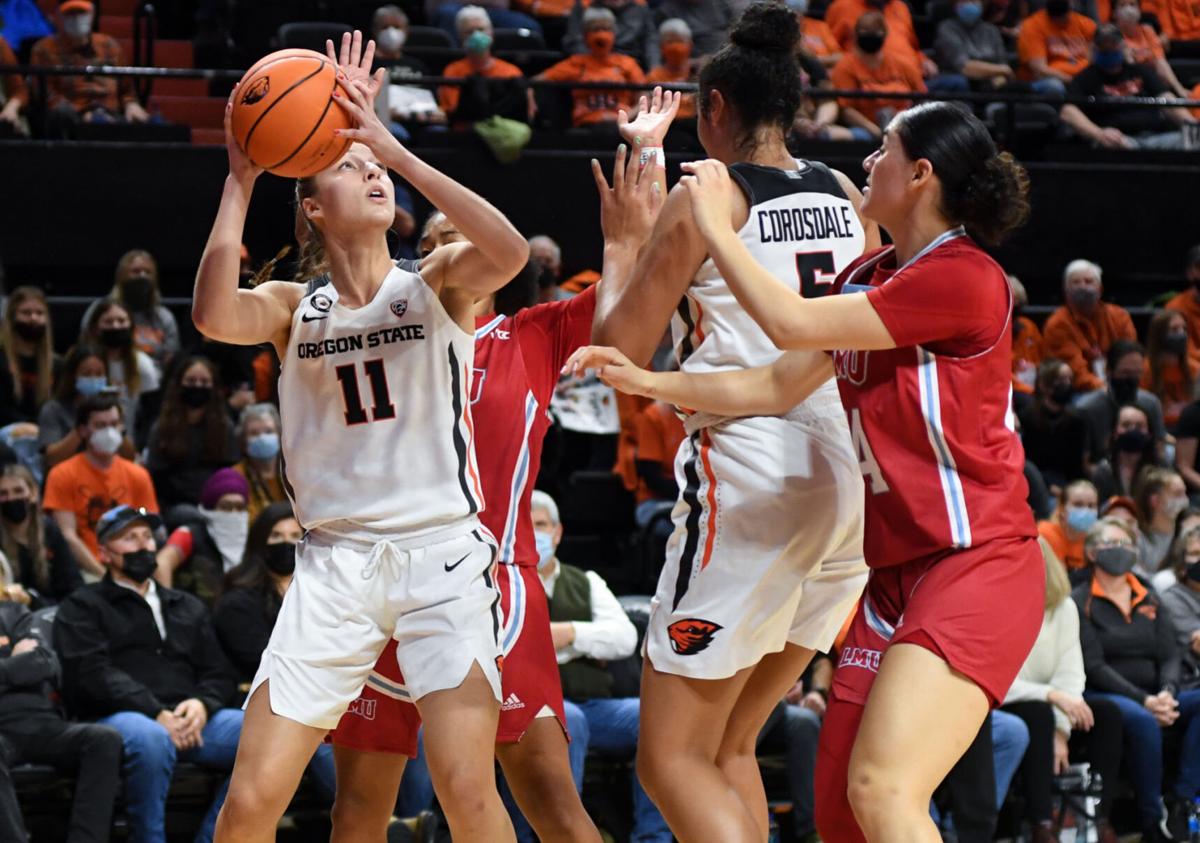 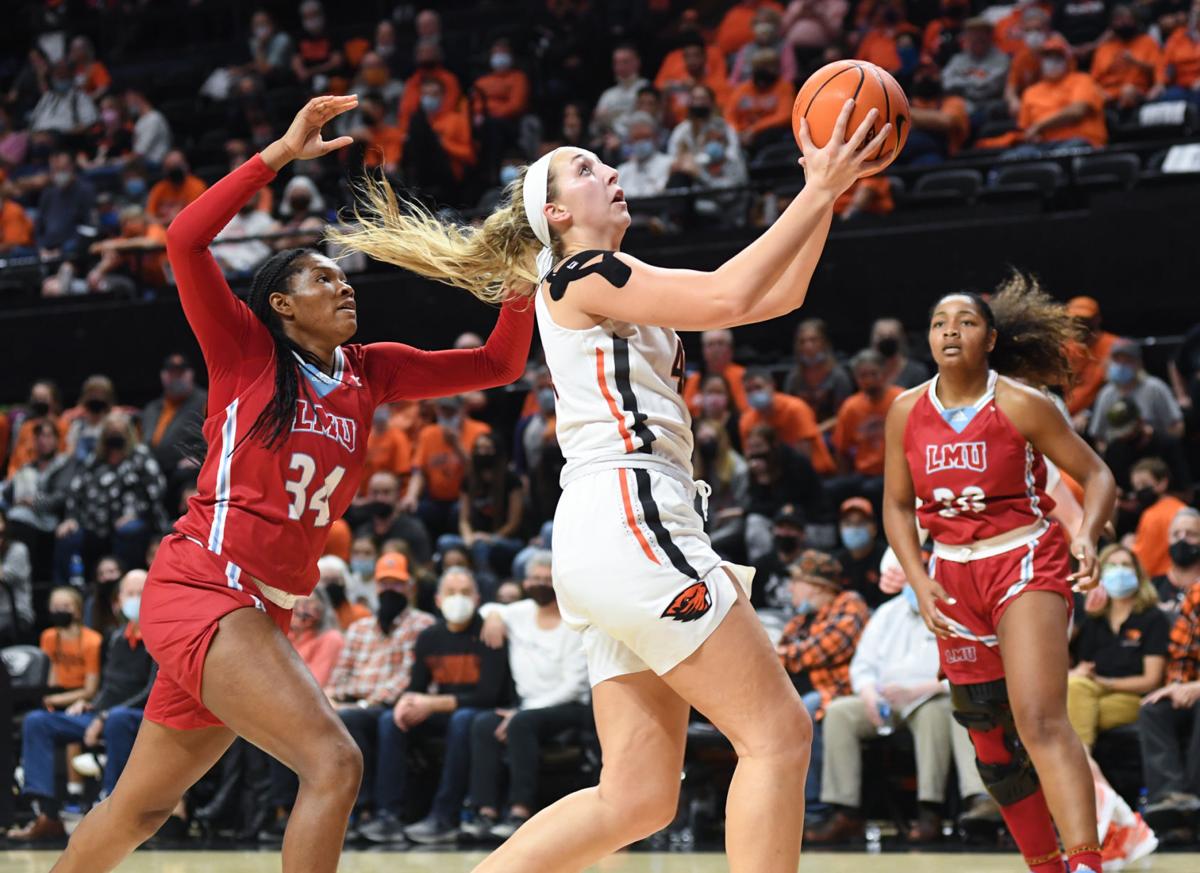 The Oregon State women’s basketball team dominated Loyola Marymount Friday night in an 82-52 victory in their season-opener at Gill Coliseum.

“It was great to be back. A great vibe in Gill, as always. This team was excited to play. I thought we saw some nerves, a lot of energy at the beginning,” said Oregon State coach Scott Rueck.

Perhaps because of those nerves, the Beavers did not shoot well early, especially from beyond the arc. Freshman AJ Marotte gave the team a spark midway through the first quarter when she came off the bench. She banked in a 3-pointer from the top of the key and then knocked down a corner 3 as the Beavers went on a run.

Even with that boost, the Beavers led by just three at the end of the opening quarter, 18-15. But the Beavers began to pull away as they looked for their post players inside. Forwards Taylor Jones (15 points and eight rebounds) and Kennedy Brown (10 points and five rebounds) were able to consistently get good position on the block.

The Beavers outscored the Lions 54-26 in the paint, blocked 13 shots and won the rebounding battle, 44-31. Taya Corosdale had a team-high four blocks and Jelena Mitrovic had three.

The Beavers led 44-30 at halftime and then put the game away with a 23-8 run in the third quarter.

“The third quarter was special. That was what I think this team can look like for 40 minutes during that stretch and we’re just better and better as we go,” Rueck said.

Freshman point guard Talia von Oelhoffen led the way with 19 points, three assists and five steals. Marotte ended her collegiate debut with 15 points, including 3 for 3 on 3-pointers. Téa Adams had a team-high five assists, including a nifty backdoor pass to Corosdale for a layup.

Marotte said she was thankful for her first official game experience at Gill Coliseum.

“Not many people get to experience this infectious energy that all of our fans have. Gill is insane and I’m really glad to be a part of that,” Marotte said. “It was a good start.”

Fellow freshman Greta Kampschroeder also made her debut, scoring her first collegiate points on a layup in the third quarter. She grabbed three rebounds and had three assists and she also made an immediate impact on defense with two blocks and two steals.

“Emily is a vet. She’s been in the West Coast Conference, an excellent conference, and she’s been a significant player in that for years now,” Rueck said, adding that he can already rely on her to know where to be in this new system.

Rueck said the final decision about who would start was not made until this morning. He has an abundance of options, which was demonstrated in the playing time Friday night. Twelve players saw action and Corosdale played a team-high 28 minutes. Ten other players were on the floor between 8 and 23 minutes.

“We have a lot of starters, more than five, on this team. This is probably the first game Kennedy Brown hasn’t started in her career. Tonight, Emily, obviously, started at Saint Mary’s I think her entire career down there. Téa Adams started at San Diego State. That’s one of the things with this group that we’re talking about, you’ve got to put the team before you,” Rueck said.

Ariel Johnson and Kari Clark each scored 12 points to lead the Lions (0-2).

Oregon State (1-0) will stay at home and host California Baptist at 7 p.m. Wednesday.

Notes: Before the game a moment of silence was held in memory of longtime Oregon State women’s basketball and volleyball fan Merritt Jenson, who died earlier this year at the age of 103. … Many ushers held signs reminding fans to wear their masks and compliance appeared to be close to universal. … Attendance for the opener was 4,502.

The Oregon State women’s basketball team underwent a changing of the guards this summer. Standout Aleah Goodman departed after her senior year…

The Oregon State women’s basketball team did a lot of things well on Friday night in a season-opening 82-52 home win over Loyola Marymount.

Three games into their freshmen seasons, guards Greta Kampschroeder and AJ Marotte have established themselves as contributors for the Oregon …

Innovative insulation unveiled for Team USA ahead of Winter Olympics

Brawl breaks out between Cowboys, 49ers fans outside AT&T Stadium

Brawl breaks out between Cowboys, 49ers fans outside AT&T Stadium

These rare photos show Tom Brady from his baseball days

These rare photos show Tom Brady from his baseball days