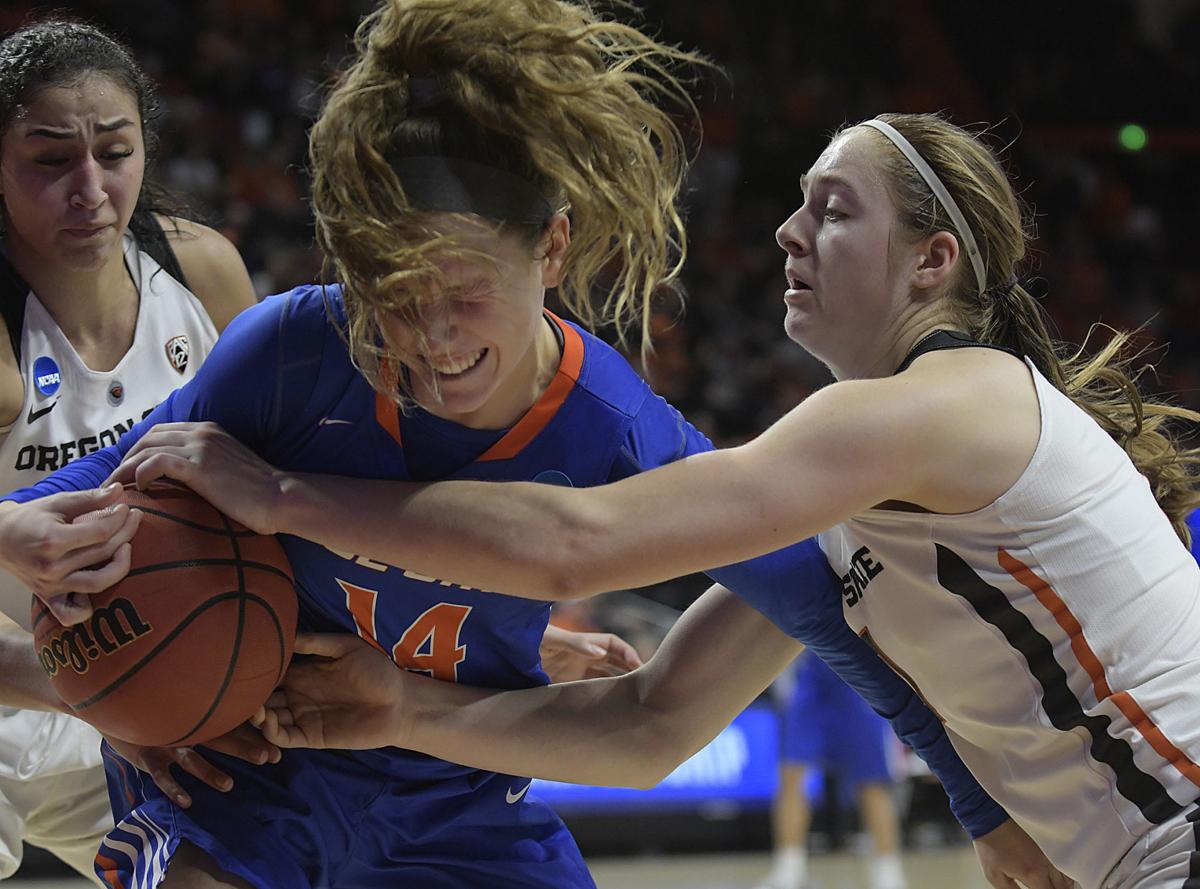 Oregon State's Mikayla Pivec, right, ties up Boise State's Braydey Hodgins in the final 10 seconds to give the ball back to the Beavers down by two. They hit two free throws and eventually knocked off Boise State in overtime, 80-75, to advance to the second round of the NCAA tournament on Saturday. 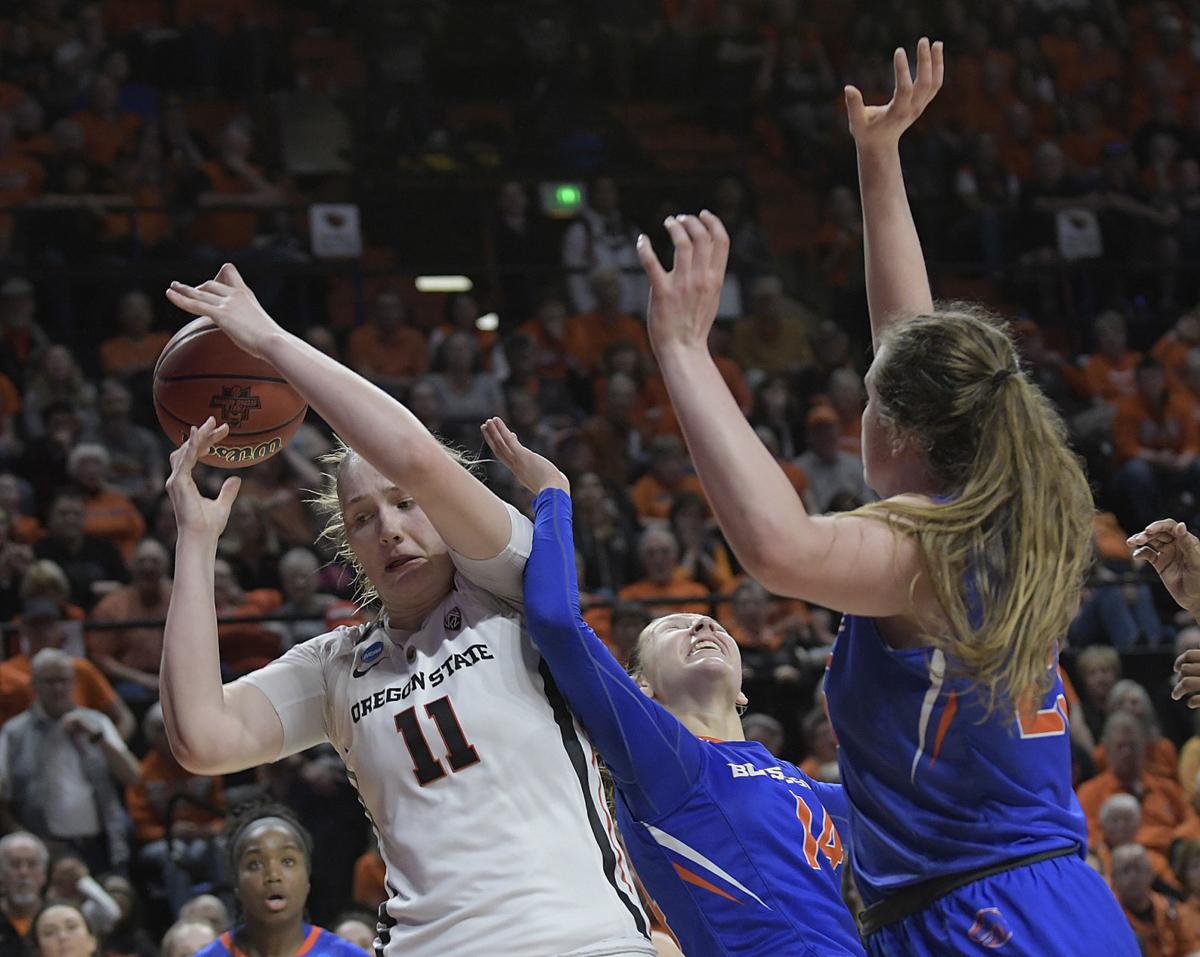 Oregon State's Joanna Grymek gets hit by Boise State's Braydey Hodgins while trying to receive a pass late in the fourth quarter. Grymek had seven points and five rebounds in the win 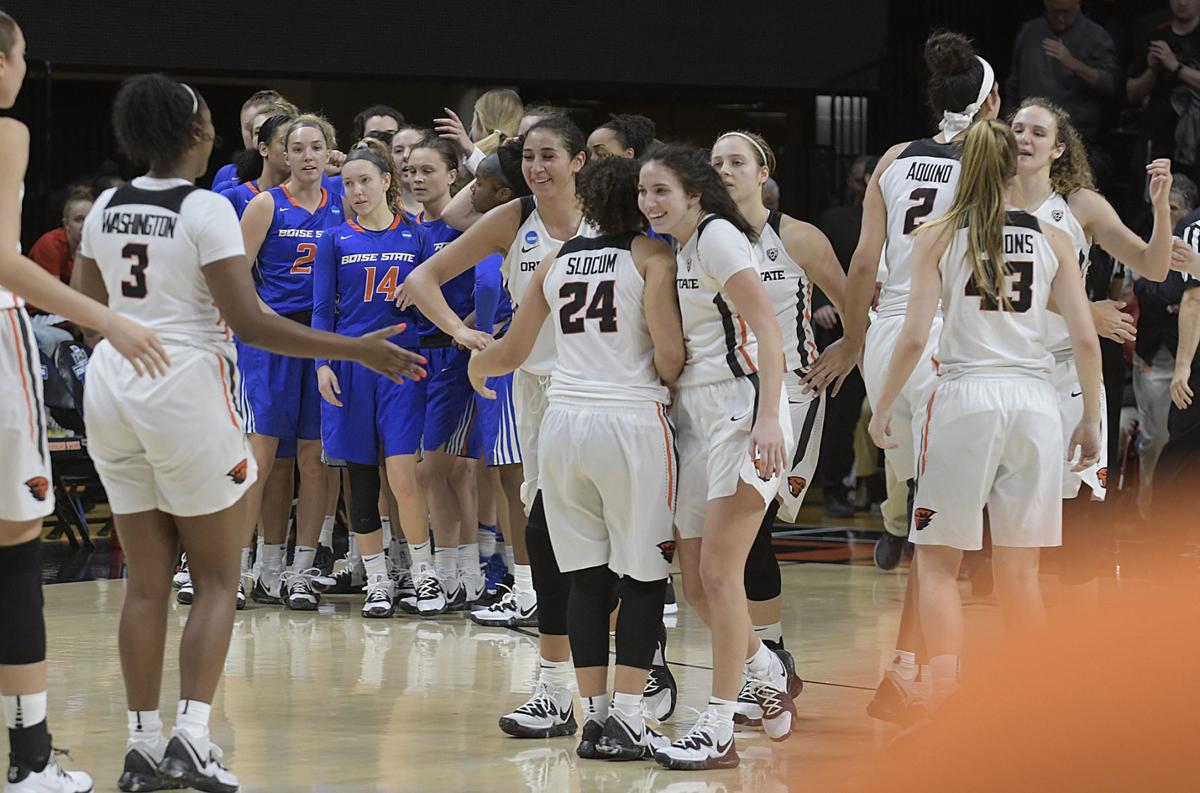 Oregon State players celebrate a victory over Boise State to advance into the second round of the NCAA tournament on Saturday.

Katie McWilliams sat at her locker Saturday afternoon, more than happy to answer a few questions and heap praise on her teammates.

She talked about the grit and determination of the team overall, the hustle and do-anything-that’s-needed play of Mikayla Pivec, the bounce-back game for Aleah Goodman and the double-double by Taya Corosdale.

The Beavers needed all of that and then some to keep their season alive, including two crucial free throws by McWilliams in what, for a good part of the fourth quarter, appeared like it very well could be the last time she suited up for the Oregon State women’s basketball team.

McWilliams’ free throws with 8.5 seconds left helped send Saturday’s first-round game of the NCAA tournament into overtime, and the No. 4-seeded Beavers hit all 10 of their free throws — after going 12 for 23 in regulation — to escape with an 80-75 victory over No. 13 seed Boise State before a Gill Coliseum crowd of 5,089.

The Beavers (25-7) survived and advanced in a game that perfectly showcased why the term March Madness is the moniker for the men’s and women’s basketball tournaments.

Oregon State is looking to advance to the Sweet 16 for the fourth straight season. The last time it failed to advance was in 2015 when Gonzaga, then an 11 seed, stunned the Beavers in Gill Coliseum.

“What an amazing atmosphere tonight, I can’t imagine what it will be like on Monday,” redshirt sophomore Destiny Slocum said. “Just I don’t know, survive and advance, that’s how it is. Gonzaga on Monday and hopefully we’ll pull out the win.”

Make no bones about it, McWilliams and several of her teammates admitted that in the final 20 or so seconds Saturday, the thought that the season was going to come to an end was more than real.

“Yeah, right before that jump ball I thought it was,” McWilliams said. “But things happen and we made the right plays at the end and that’s all that matters.”

The jump ball McWilliams referred to was forced by Pivec, who had just willed in a basket in the paint to draw the Beavers within 66-64 with 13.5 seconds left.

Pivec was able to tie the ball up with Boise State’s Braydey Hodgins with 9.6 seconds left and the possession arrow gave the Beavers the ball and suddenly, new life.

They made the opportunity count.

McWilliams, who was not on the floor, subbed in during the timeout and coach Scott Rueck called his senior’s number on the inbounds play. After being fouled on the shot, McWilliams calmly stepped to the line for two of the biggest foul shots of her life.

She had no doubt.

“I just stepped up like I always do, composed and poised and I knew I was going to hit them,” McWilliams said. “I mean, to be out for most of the fourth quarter and for Scott to put me in for that play it felt really good that he trusted me. I was like, I’m not going to miss these free throws and just knocked them down.”

The Beavers then built a 74-68 lead in the overtime thanks to back-to-back layups by Slocum, including a smooth reverse, with 2:18 to go.

But the Broncos (28-5), winners of the Mountain West Conference tournament title for the third straight season, would not go away.

Down 76-72, Riley Lupfer drained a 3 with 19 seconds left. Pivec then sank two free throws before Lupfer missed another 3 attempt.

Finally, when Corosdale made the ninth and 10th free throws of the overtime period, the Beavers could breathe a sigh of relief.

Pivec had another all-around game with 20 points, 12 rebounds, five assists and three steals, and she seemed to find the ball throughout the game every time the Beavers needed it.

“She’s the toughest player I’ve ever played with or that I’ve played against back in the day,” McWilliams said. “She’s just a competitor that you always look up to. You know you can always go to her in the close moments and just throughout any game. Just a remarkable player. She’s going to give it her all every game.”

Maddie Washington, who got the start and scored eight points on 4-for-5 shooting, described her as “Mikayla ‘ice in her veins’ Pivec. … If it’s a layup, if it’s a free throw, a rebound, whatever we need Mik to do she always does it.”

Goodman, who didn’t make a field goal attempt in 10 tries in the Pac-12 tournament quarterfinal loss, finished with 20 points and was 6 for 9 from the field. Corosdale added 13 points and 15 rebounds and Slocum had eight points and five assists.

Playing the first time in more than two weeks, the Beavers were able to take an 18-12 lead after the first quarter. Pivec had five points, three rebounds and two assists.

The Beavers then scored the first four points of the second quarter to go up 22-12 before building a 27-15 lead on a McWilliams drive for the score.

But as has been the case at times this season, the Beavers allowed an opponent to get back in the game.

Down 29-15, Boise State answered with 10 straight as Hermida scored the first five and the Broncos were within 29-15 with 2:36 left in the half.

However, this time the Beavers responded with seven of their own as Pivec got free inside, Goodman had an old-fashioned three-point play and Pivec scored again to make it 36-25.

Jayde Christopher cut the OSU lead to 36-28 with a 3-pointer as the half expired.

Then came the third quarter where Hermida scored the first five of the third to get Boise State within 36-33 before the Beavers were able to go up 42-35 on a Pivec bucket with 5:22 left.

Hermida’s two free throws with 17 seconds left appeared to be the dagger but the Beavers had other ideas, even in the darkest of moments.

“You just have to keep fighting and never give up,” Pivec said. “Super proud of our heart and willingness to keep fighting. … We kept working and believing in ourselves and our teammates.”

Aleah Goodman took the loss to Washington in the Pac-12 women’s basketball tournament quarterfinals as hard, or harder, than any of her teammates.

The last time Oregon State took the court against Gonzaga in a women’s basketball game, it was the Beavers who left the court stunned and deva…

While the NCAA women's basketball tournament is in full swing, it's hard to forget what happened just a few days ago.

OSU women's basketball: Mikayla Pivec leaving lasting legacy on and off the court

Mikayla Pivec made her way around the Boys & Girls Club of Corvallis on a Monday afternoon, checking in with her Oregon State women’s bask…

Oregon State's Mikayla Pivec, right, ties up Boise State's Braydey Hodgins in the final 10 seconds to give the ball back to the Beavers down by two. They hit two free throws and eventually knocked off Boise State in overtime, 80-75, to advance to the second round of the NCAA tournament on Saturday.

Oregon State's Joanna Grymek gets hit by Boise State's Braydey Hodgins while trying to receive a pass late in the fourth quarter. Grymek had seven points and five rebounds in the win

Oregon State players celebrate a victory over Boise State to advance into the second round of the NCAA tournament on Saturday.