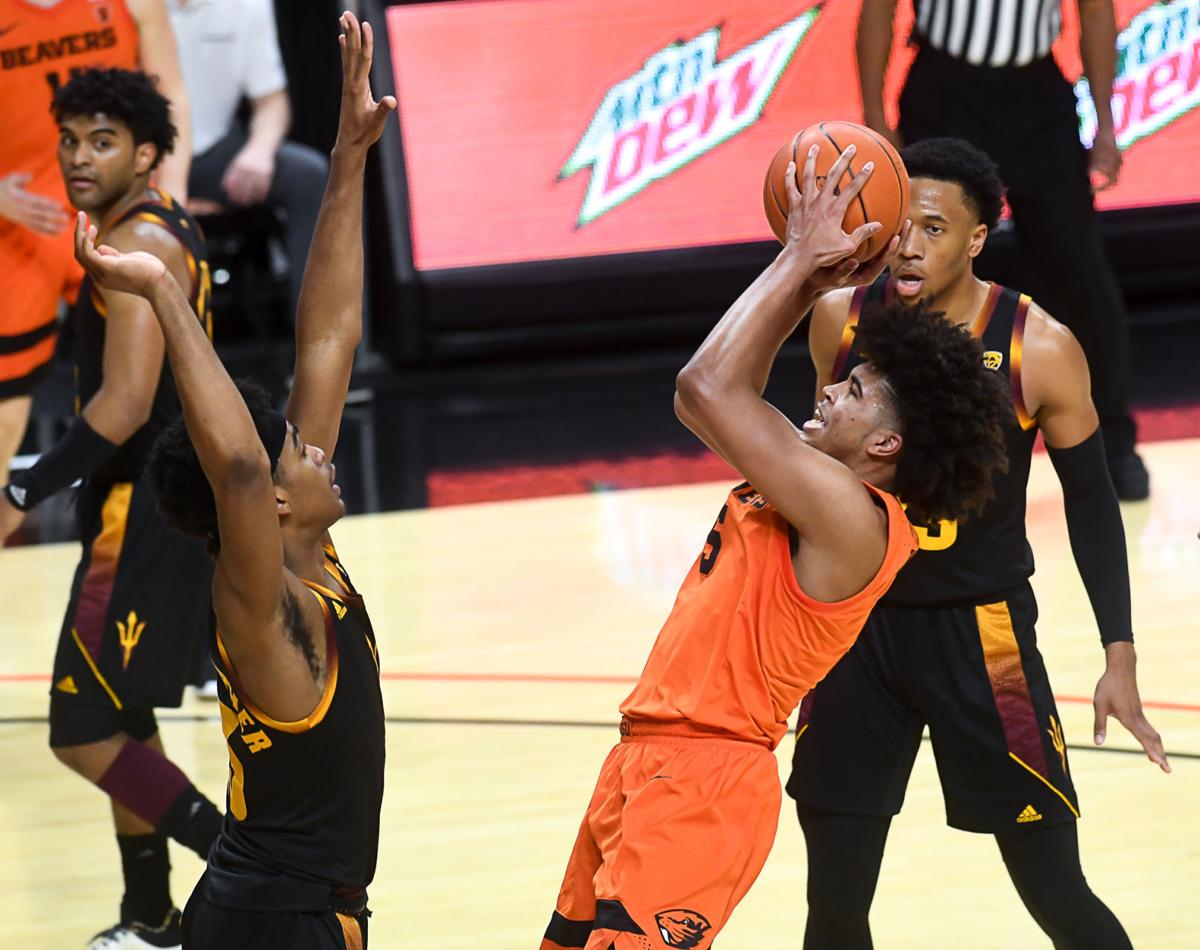 Oregon State's Ethan Thompson scored 17 and had a key assist late in the game to help the Beavers to an 80-79 victory over Arizona State on Saturday. 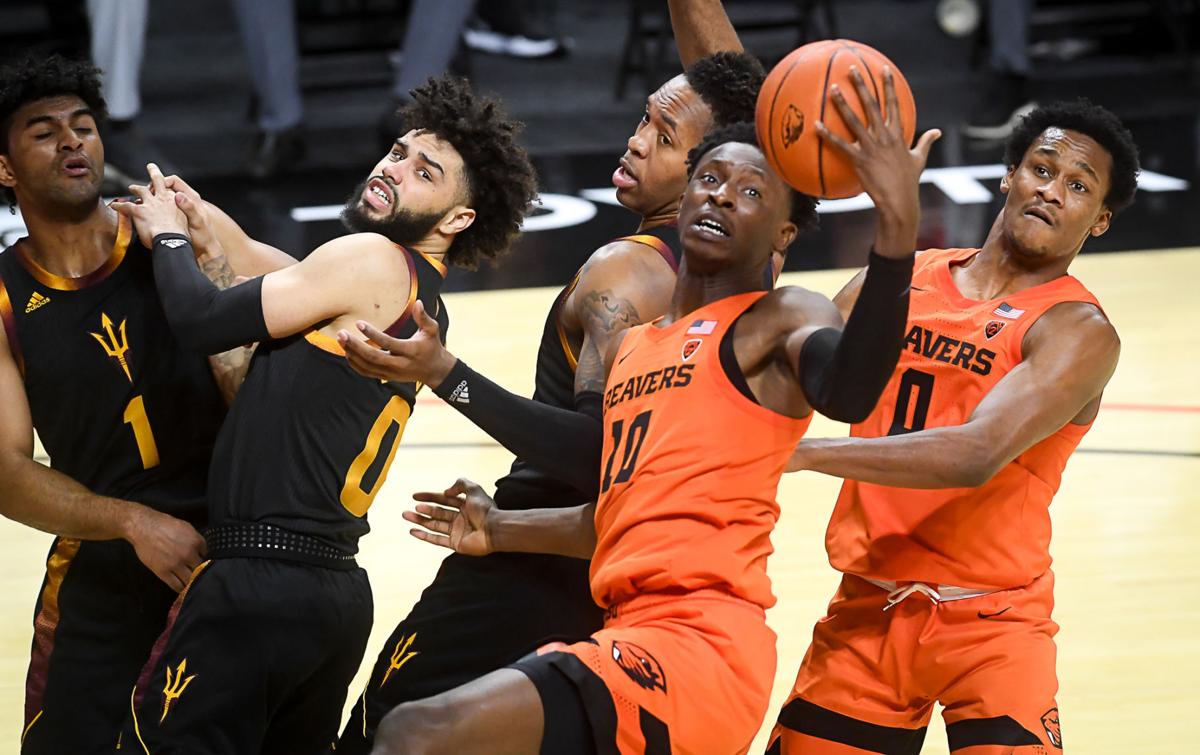 Warith Alatishe scored six including the go-ahead basket with just over four seconds remaining in the Beavers' win. 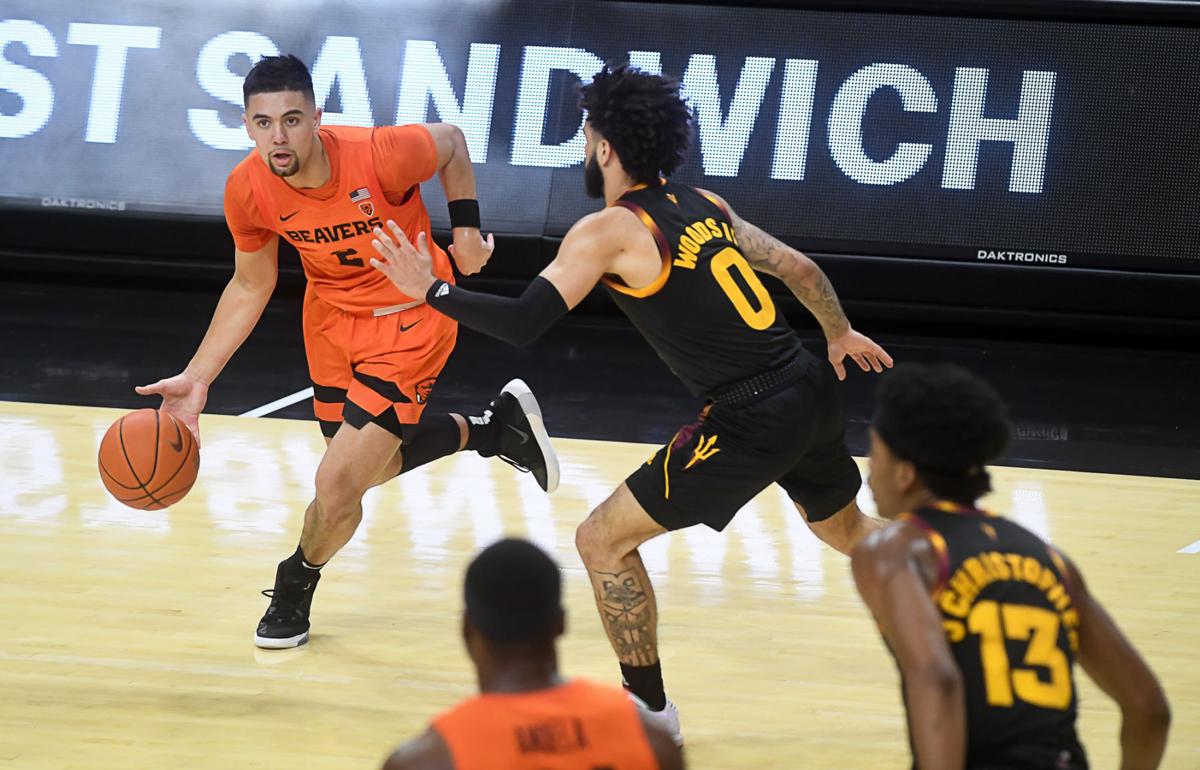 Oregon State's Jarod Lucas led the Beavers in scoring with 18 points in their 80-79 victory over Arizona State on Saturday.

It might have been fitting that Ethan Thompson didn’t hit the winning shot Saturday but that he was right in the middle of deciding the outcome in the closing seconds.

Oregon State coach Wayne Tinkle said opposing teams have been able to “load” their defenses to stop the senior guard this season because teammates haven’t been able to consistently help on the offensive end.

Thompson got that help when Warith Alatishe, seeing No. 5 was double-teamed, broke to the basket and flushed home a Thompson pass for the go-ahead basket with 4.1 seconds remaining.

Remy Martin’s heave from just inside half court was short, grazing the front rim, and Oregon State held on for an 80-79 Pac-12 men’s basketball win at Gill Coliseum.

Tinkle said he had considered calling a timeout after Arizona State’s Marcus Bagley hit a 3-pointer to put the visitors up one with 10.7 seconds remaining.

“But when we saw the ball was in Ethan’s hands, we decided not to because we knew he was going to make a great decision,” the coach said. “Great cut by Warith to get that last bucket was huge.”

It was the perfect finish for Thompson, who scored 15 of his 17 points in the second half as OSU (6-5, 2-3 Pac-12) got the better of Arizona State (4-6, 1-3) in a battle of hungry teams with losing streaks. Both squads dealt with previous COVID-19 problems in their programs and others that limited their schedules in the past month.

As he brought the ball up the floor, Thompson said he heard Sun Devil players preparing to guard him as though he would be the one taking the last shot. That made sense, given the fact Thompson is the Beavers’ leading scorer on the season and shot 5 of 7 overall after halftime.

“When I heard that, all their eyes were on me,” Thompson said. “I knew if I could get to a good spot on the floor where I could hit a guy and create something, and Warith had a great cut. He ran down the middle of the floor and I saw him open so I just flipped it.”

It was Thompson’s fifth assist of the game and created the 20th lead change of the contest, which also included 17 ties.

“You want to have the ball in the best player’s hands and you want to go to work, and that’s what we did,” said OSU sophomore guard Jarod Lucas.

Bagley had 19 points, 16 coming in the second half with three 3-pointers, to lead Arizona State, which was playing its only game of the week after Oregon paused its program due to a positive COVID test in its program. Teammates Josh Christopher and Martin added 14 points apiece.

Martin and Alonzo Verge Jr., their team’s top scorers, combined to shoot 4 of 17 overall and 0 of 9 on 3-pointers. Martin returned after missing both games last week.

The victory helped the Beavers forget about Thursday’s 98-64 home loss to Arizona in which the Wildcats controlled the game from start to finish.

Tinkle said he told his team after that game and again before tipoff Saturday that you’re never as bad or as good as you think you are.

“It’s an unbelievable turnaround for us. The way we responded, the way we came out of the gate, the way we set the tone in all facets,” Tinkle said.

The Beavers didn’t panic when the Sun Devils made their second-half run. Instead, they found a way to make one more play with the game on the line.

Thompson completed two and-ones, one for three points and another for four, helping Oregon State push a one-point halftime lead to seven in a little more than three minutes.

In between, Reichle hit a corner 3-pointer off a Thompson assist.

Arizona State closed the deficit by putting some defensive pressure on the Beavers, who had five turnovers in the first seven minutes of second half after accumulating just five in the entire five in first half.

The Sun Devils scored six straight to get within one for the first of two times before another Reichle 3-pointer kept the Beavers in control. Maurice Calloo drove and found Rodrigue Andela for a layin and a 59-53 OSU lead with 11:07 remaining.

Thompson scored the Beavers’ next five points, including a conventional three-point play to make it 64-57.

Soon after, Andela went to the floor and held his right foot after being fouled in the key. He injured a foot and left the Jan. 4 game against Stanford and then returned and played two minutes Thursday versus Arizona.

Andela got back in Saturday’s game and made two free throws with 1:45 left to give the Beavers a 73-72 lead.

After the Sun Devils retook the lead, OSU’s Gianni Hunt was pressured on a frontcourt inbounds pass. He gathered the ball, escaped his defender and tossed in a short floater to put the Beavers in front.

Martin made two free throws with 41 seconds remaining, and 13 ticks later Lucas sank three foul shots after Verge was whistled for his fifth and disqualifying personal on a Lucas deep ball attempt.

OSU men's basketball: Changes may be coming after Arizona loss

Oregon State men’s basketball didn’t get its regular stretch of summer workouts and the fall lead-up to the season was cut short due to the pandemic.

It’s only taken three weeks, but there’s already separation being created in the Pac-12 men’s basketball standings as the top teams begin to m…

OSU men's basketball: Beavers get back to practice court; Arizona game on as scheduled

OSU men's basketball: A look at the opponent — USC

USC comes to Oregon State on Tuesday for a Pac-12 men’s basketball game carrying a six-game winning streak. Here’s a look at the Trojans.

Pac-12 men’s basketball has become the haves and the have-nots.

OSU men's basketball: Defense gets the job done in win against USC

Playing defense the way Oregon State coach Wayne Tinkle wants out of his team has been a work in progress this season.

OSU men's basketball: Improved defense, inside and out, leads to team's turnaround

Ethan Thompson prides himself on defense.

Oregon State's Ethan Thompson scored 17 and had a key assist late in the game to help the Beavers to an 80-79 victory over Arizona State on Saturday.

Warith Alatishe scored six including the go-ahead basket with just over four seconds remaining in the Beavers' win.

Oregon State's Jarod Lucas led the Beavers in scoring with 18 points in their 80-79 victory over Arizona State on Saturday.