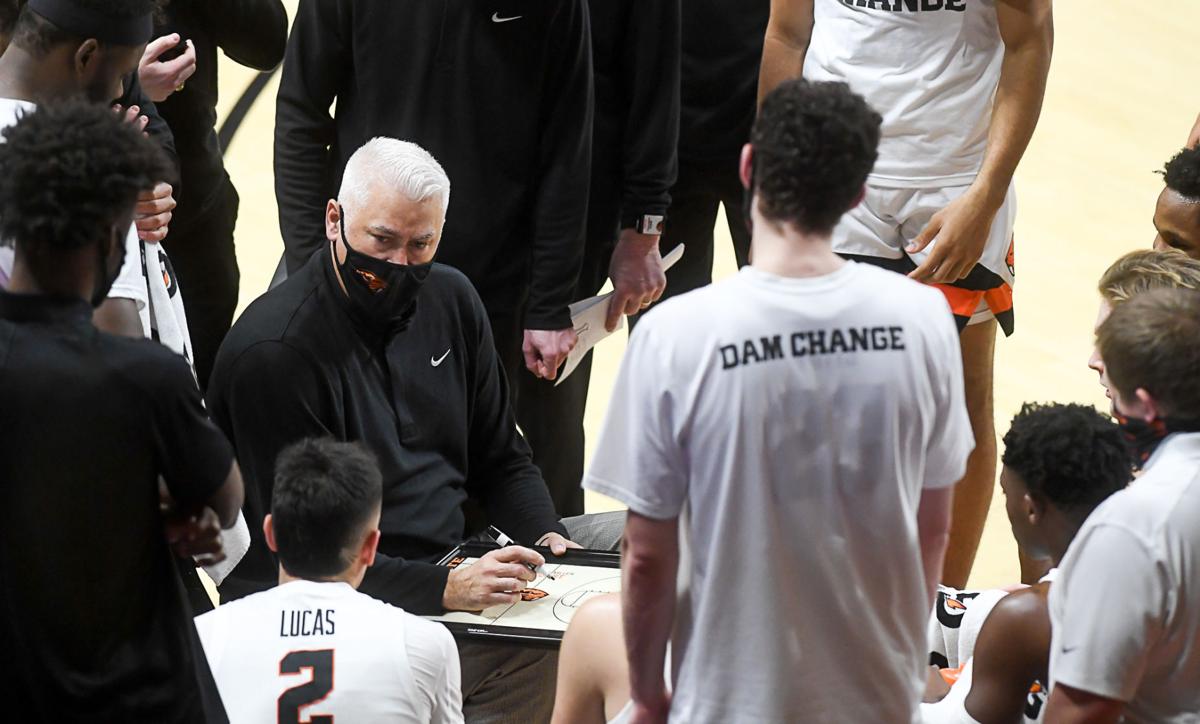 Coach Wayne Tinkle and the Beavers are looking to improve the team's 41% shooting mark in Pac-12 play, which is last in the conference. 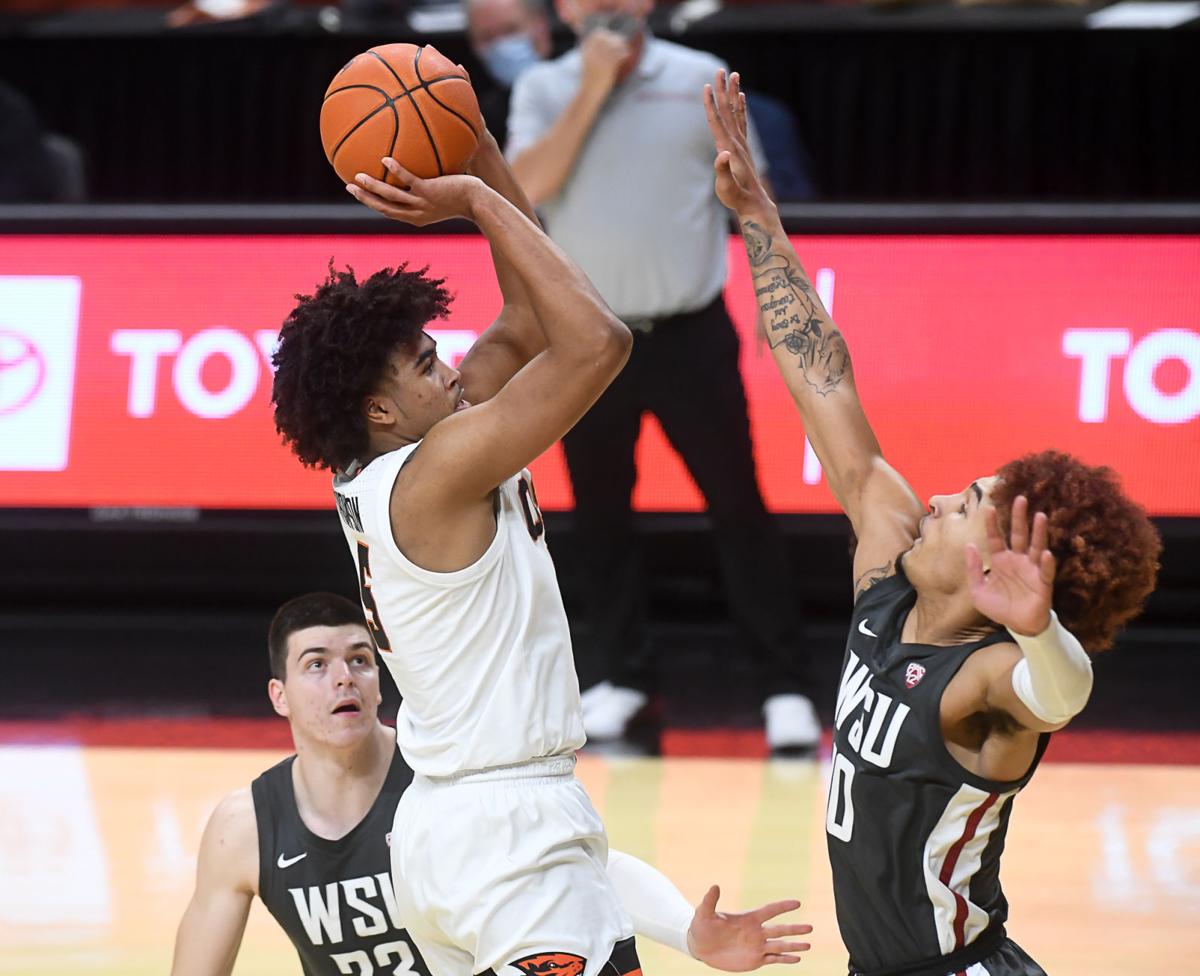 Oregon State was lost on defense earlier in the season, at one point giving up 50% shooting to four straight opponents.

But the defense has been remedied and many of the holes filled, bringing the shooting number on a more regular basis closer to the 40% mark that coach Wayne Tinkle aims for in providing a better chance of success.

Opponents aren’t scoring at will around the basket nearly as often as they were previously.

The offense, though, remains a hurdle.

“Sometimes the ball might get stuck a little bit or we might rush a shot or two, and we’re not in positions to rebound the shot,” said senior guard Ethan Thompson. “If we try and get the most out of every position I think that’s key, and that goes into everything including shot selection, executing plays and taking care of the ball.”

Turnovers have crept higher in recent weeks. A lack of discipline has made life harder on that end of the floor and made for easy opportunities for other teams. The opponents on the recent three-game road trip outscored the Beavers 51-5 in fast-break points.

“Our halfcourt defense is good. Dang it, we’ve got to be stronger with the ball. We can’t let them take it from us. We need to be sharper with execution,” Tinkle said this week. “When we execute it, we work inside out, we trust the offense and trust each other, the offense can be pretty good. When we don’t do that, it gives chances to the other team to get out and score against us in transition and adds a little frustration to us on both ends.”

The coach said his players have to be locked in and that this point of the season is “put up or shut up time.”

The Beavers (10-10, 6-8 Pac-12) are halfway through a stretch of 10 games in 24 days, which includes road games against Colorado and Utah that were postponed earlier in the season.

Oregon State begins its second run of three games in five days Thursday when it hosts Utah (9-8, 6-7). Then it’s a Saturday home game versus Colorado (16-6, 10-5) followed by a Monday contest at Utah.

OSU is ninth in scoring in conference games at 66.6. The Beavers have scored more than 70 just twice in the last seven games.

But it’s not necessarily how many points you’re scoring. OSU has outshot its opponents in four of those games. Turnovers have negated that advantage.

Three of the Beavers’ six highest turnover totals of the season have come in that seven-game stretch. That includes Sunday’s 75-73 loss at Arizona State, where Oregon State had 15 turnovers, with 11 in the first half that the Sun Devils turned into 21 points. Fifteen points were scored in transition immediately after those turnovers.

“Our defense has been pretty solid,” Tinkle said. “If we wouldn’t have given Arizona State the amount of touchdown turnovers, just like layups, we’d have really defended well.”

Even with all the freebies, the Sun Devils shot just 42.6% for the game.

A charge for Oregon State’s perimeter players continues to be getting the ball into the small post. Then it’s the job of the post players to be productive and make good decisions.

Tinkle said he’s certain the guards understand that is a focus because of how much attention is paid in practices and film sessions to making it happen.

“They understand it, but it’s two parts. It’s not like they’re just ignoring our bigs,” the coach said.

The post players have to set solid screens and get in good position near the basket before they decide to try and score or pass the ball back out.

“We’ve got some unselfish bigs, and they know when they don’t have a good look,” Tinkle said.

While the offense tries to make steps forward, Oregon State will continue to lean on its defense.

Thompson says the recent defensive improvement has come from the players buying into the idea of having each other’s backs. The Beavers have been able to extend stretches of solid play on that end of the floor, but short lapses at inopportune times have cost them games.

Thompson said another factor in the improvement is additional time together as the season has progressed.

“I think that plays into it a lot. Obviously we probably aren’t the only team that’s hitting their stride in terms of chemistry,” he said. “I think being this far into the season we’re kind of familiar with each other’s tendencies and where they are on the court.”

OSU men's basketball: A look at the opponent — Utah

Oregon State and Utah meet in men’s basketball for the first time this season Thursday at Gill Coliseum. Here’s a look at the Utes.

OSU men's basketball: Defense never relents as Beavers use 17-0 run to pull away from Utes

Wayne Tinkle said his team didn’t “freak out” when Utah jumped Oregon State on Thursday night to grab the lead early in the second half.

Warith Alatishe’s offensive progress is evident to his coach, Wayne Tinkle, and others who have watched him grow into a player Oregon State is…

OSU men's basketball: A look at the opponent — Colorado

Oregon State and Colorado meet for the second time in less than two weeks Saturday when the Beavers host the Buffaloes at Gill Coliseum. Here’…

The Oregon State men’s basketball schedule has been updated for the final week of the Pac-12 regular season.

Coach Wayne Tinkle and the Beavers are looking to improve the team's 41% shooting mark in Pac-12 play, which is last in the conference.