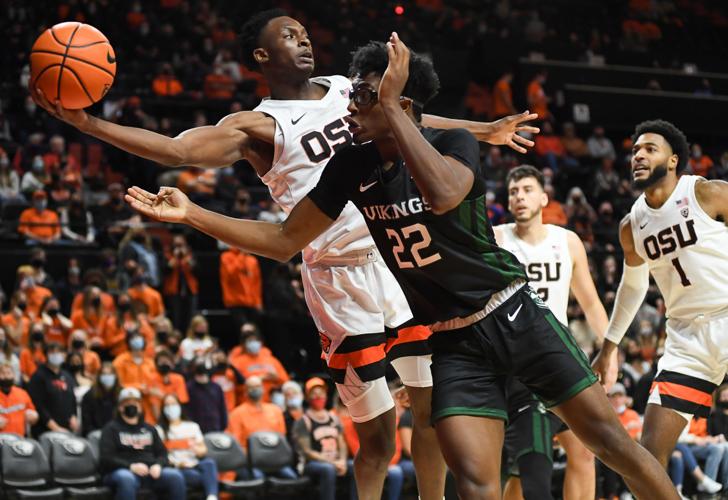 Oregon State's Warith Alatishe (10) reaches for the ball before it goes out of bounds in the first half. Alatishe had a game-high 21 points in the 73-64 win against Portland State. 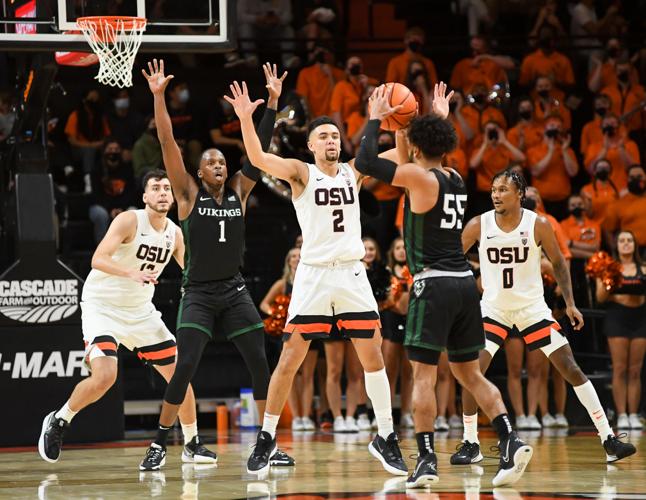 Oregon State's Roman Silva (12), Jarod Lucas (2) and Gianni Hunt (0) defend against Portland State. The Vikings shot just 10 of 30 in the second half as the Beavers erased a double-digit deficit. 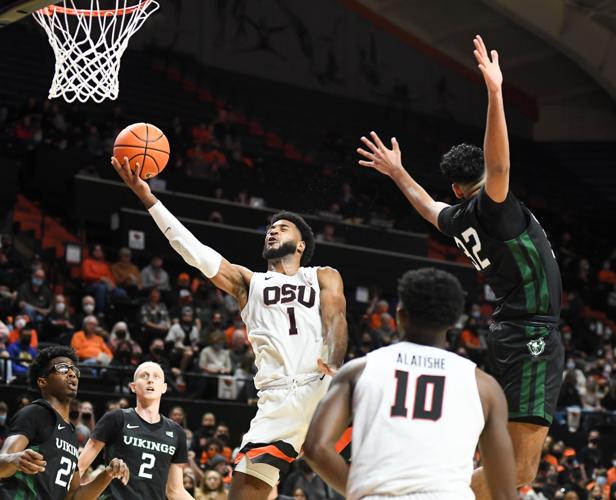 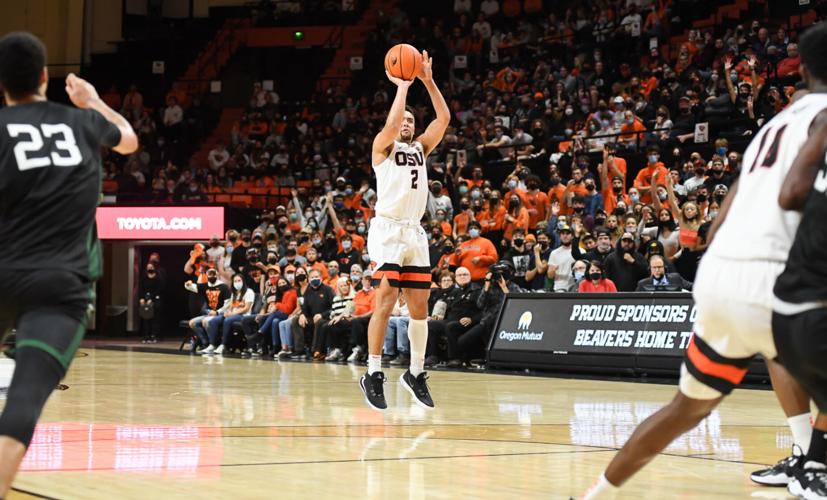 Oregon State's Jarod Lucas (2) made a trio of 3-pointers in his 16 points Tuesday.

With the highs and lows that so many of his players were experiencing Tuesday night, it made it difficult for Wayne Tinkle and his staff to decide who they would roll with in crunch time.

But Tinkle expects it’s going to be that way with the Oregon State men’s basketball team he’s assembled this season and the depth that's being developed.

The Beavers rallied from 11 points down with 13 minutes left and saw the potential of what they could be when the pieces start to fall into place on both ends. OSU pulled away from Portland State down the stretch and held on for a 73-64 win in the season opener at Gill Coliseum.

“We’ve got so many pieces,” said Tinkle, whose roster includes seven newcomers on scholarship, six of whom have previous college experience. “Some guys, it’s just not their night, which happens. Then we’ve got to find somebody else. This guy’s minutes in the first half, he really set the tone with his hustle.”

“This guy” was sophomore forward Isaiah Johnson, who saw limited playing time last season as a first-year player in the program. He was on the floor for less than five minutes Tuesday, but it was an impactful period. Johnson had two points, one rebound, one assist and one steal while being a defensive presence.

“It’s really a great thing, because I like to pride myself on bringing energy and picking up where my teammates left off, and they always build confidence in me.” Johnson said. “It’s fun. I get to help in new ways on and off the court, it doesn’t matter where I’m at.”

Added Tinkle: “He’s been really patient. He knew when we recruited him that it was going to be him learning our system, developing his skill and then it was going to pay huge dividends down the road.”

The Beavers struggled offensively in the first half, shooting 13 of 36 and trailing 32-28 at halftime after PSU’s Ian Burke threw in a halfcourt buzzer-beater.

Tinkle chalked it up to first-game nerves, being careless with the ball (OSU had seven turnovers), missed open looks at 3-pointers and shooting 1 of 5 at the free-throw line.

A Jarod Lucas corner 3-pointer ended a 7-0 Vikings run to help the Beavers get within eight. It was two more Lucas 3s to start a 12-0 run that saw Oregon State take the lead for good.

Down three after the run, PSU would close within one on four occasions. But the Beavers’ defense and some Vikings struggles at the foul line kept OSU in front. Portland State missed the front end of three 1-and-1 opportunities in the final 5:53.

OSU went 7 of 10 at the line over the final 2:06, a stretch in which PSU didn’t score until there were three seconds remaining and the game long decided.

The Vikings, who shot 10 of 30 from the floor in the second half, could muster just 17 points over the final 11-plus minutes of the game.

Beavers forward Ahmad Rand, just cleared to play after recovering from a broken finger, provided a spark in the second half with four points, one rebound, three blocks and a steal in six minutes.

OSU forward Warith Alatishe said the message at halftime was about defensively being in the gaps and helping teammates.

“Coming into the second half we were taught to emphasize that and make sure we had each other’s backs,” he said.

Alatishe had a game-high 21 points, including his team’s first 11 and 15 by halftime. He added eight rebounds, two assists, two steals and two blocks.

“Our guys got on page, especially down the stretch the last 10 minutes and found a way to win it,” Tinkle said. “It wasn’t a thing of beauty but we’ll be able to learn a lot from it as we move forward. I’m glad it didn’t cost us a game.”

Khalid Thomas had 16 points and James Jean-Marie 14 for Portland State, which has never defeated OSU in 16 tries. The Beavers won 67-62 at Gill last season.

Oregon State next plays Friday at Iowa State to start a two-game road trip that finishes with a Monday game at Tulsa. The Beavers then return home for two games in four days against Samford (Nov. 18) and Princeton (Nov. 21).

OSU football: Offense looks to not leave yards, points behind

EUGENE — The Crescent Valley High boys cross-country season ended Saturday afternoon without a state title, but not without a good effort by t…

EUGENE — Emily Wisniewski ran at the front and no one could catch her when it mattered most.

OSU football: Beavers glad to be staying home this weekend

Oregon State football has found success playing at home this season, winning all four in Corvallis.

Ahmad Rand entered Tuesday’s game for the first time in the second half and made an immediate impact.

OSU men's basketball: A look at the opponent — Tulsa

Oregon State finishes its two-game roadtrip Monday night with a game at Tulsa (6 p.m., ESPNU). Here’s a look at the Golden Hurricane.

Who has scored the most World Cup goals of all time?

Who has scored the most World Cup goals of all time?

Oregon State's Warith Alatishe (10) reaches for the ball before it goes out of bounds in the first half. Alatishe had a game-high 21 points in the 73-64 win against Portland State.

Oregon State's Roman Silva (12), Jarod Lucas (2) and Gianni Hunt (0) defend against Portland State. The Vikings shot just 10 of 30 in the second half as the Beavers erased a double-digit deficit.

Oregon State's Jarod Lucas (2) made a trio of 3-pointers in his 16 points Tuesday.