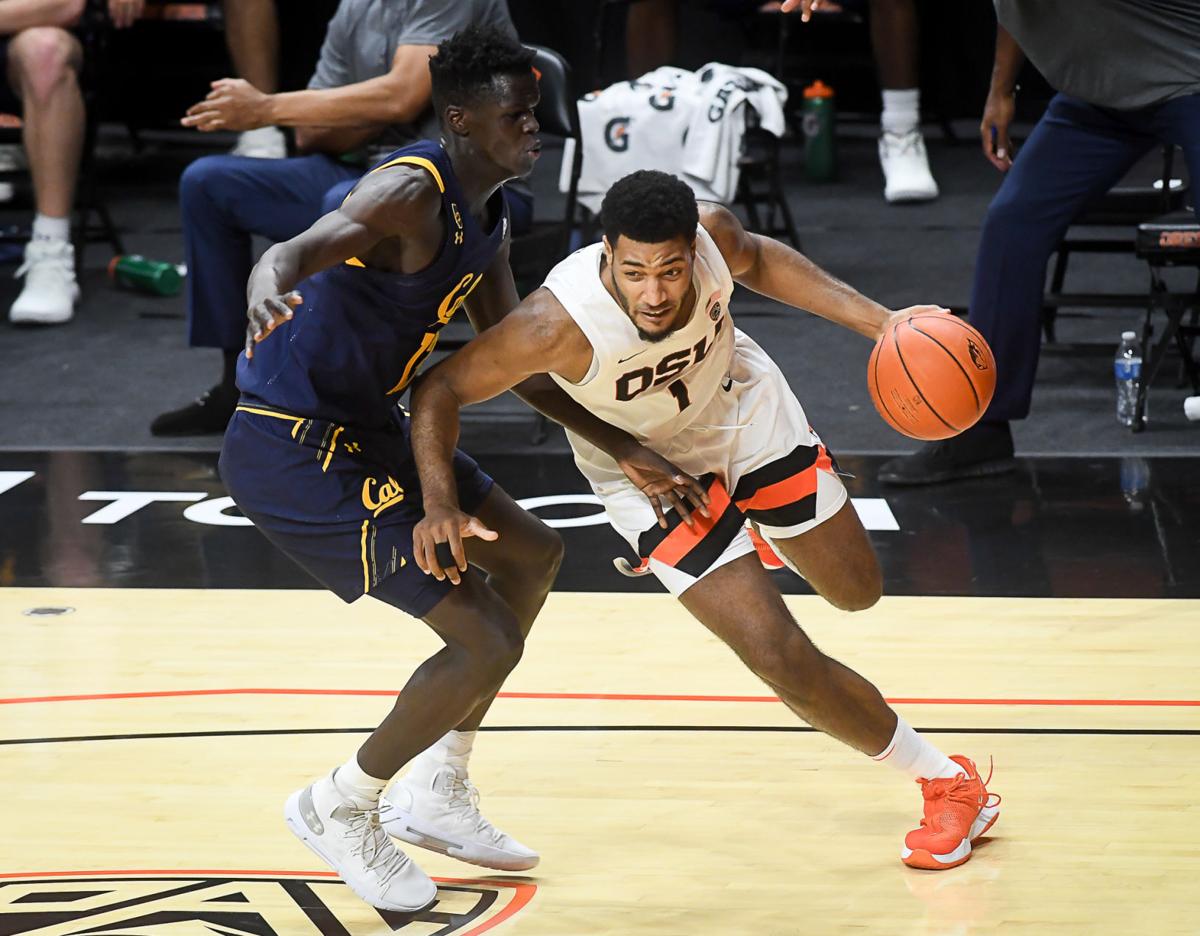 Oregon State's Maurice Calloo came on strong in the second half to spark the Beavers to a 73-64 victory over California on Saturday. Calloo finished with 14 points for the Beavers. 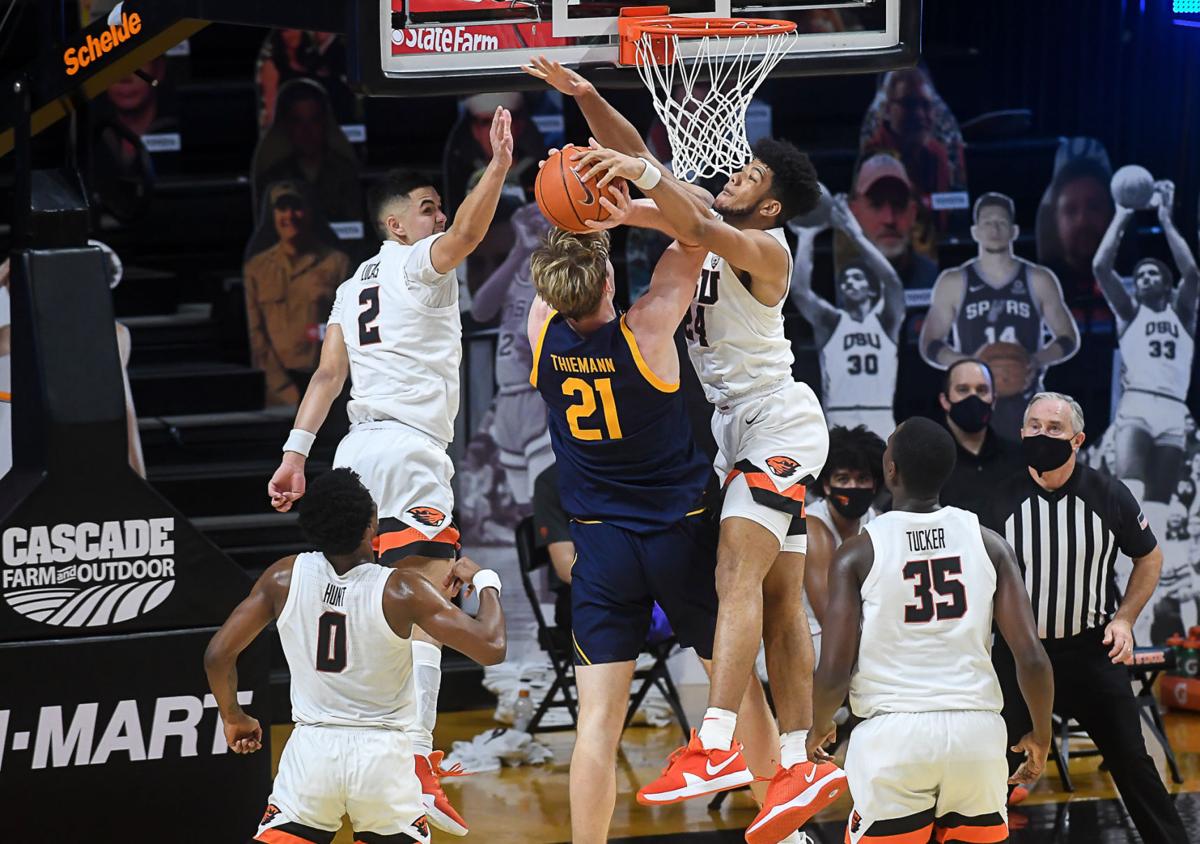 The Beavers were able to make some big stops on defense as well as putting together some good offense in the win against California. 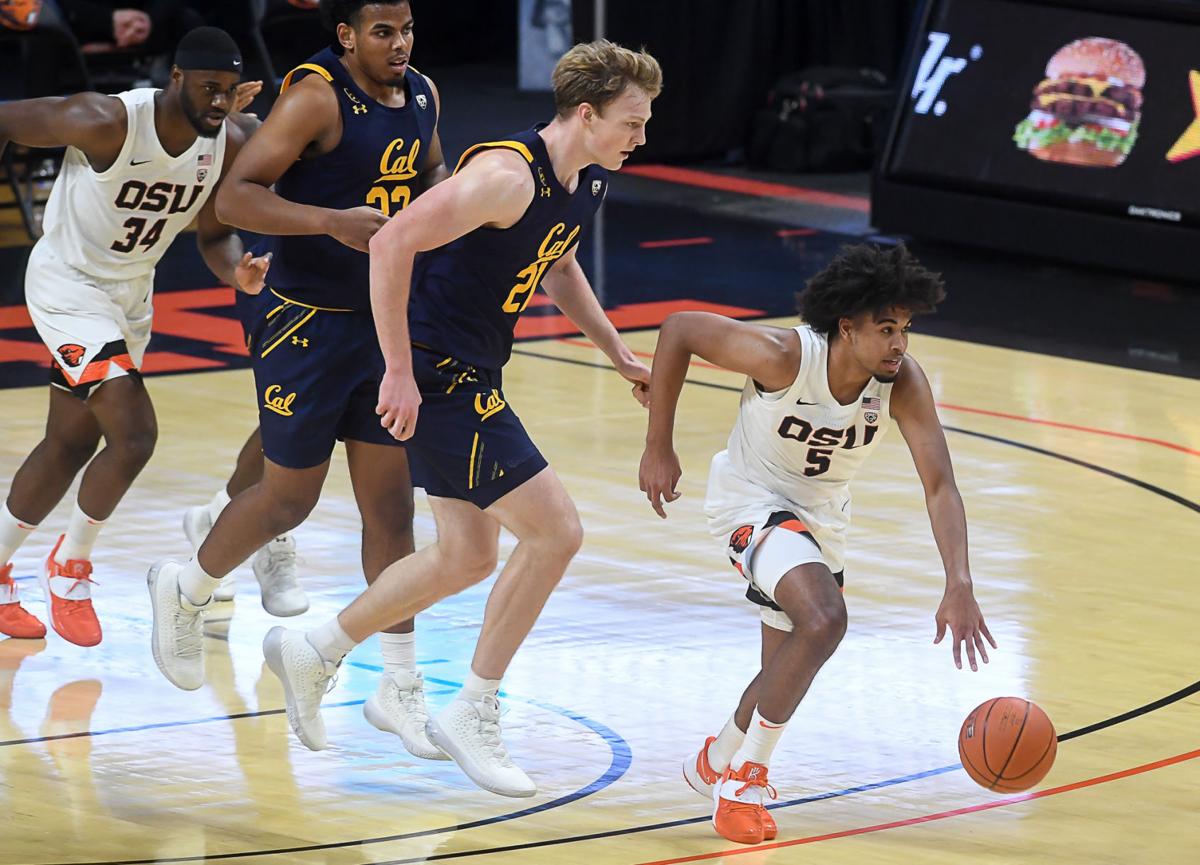 Oregon State's Ethan Thompson leads a fast break in the first half of the Beavers' win against Cal. Thompson finished with 16 points and five assists.

Oregon State eventually found what was missing Saturday afternoon for about a half on offense and for roughly 30 minutes on the defensive end.

Wayne Tinkle said he saw the potential his men’s basketball team could reach and what the program thought was possible before this unique season started.

The Beavers played together on offense and limited mistakes on defense to erase a 12-point second-half deficit and turn it into a 73-64 Pac-12 win against California at Gill Coliseum.

“In the second half our guys started sharing it, started executing our sets, dug in defensively and basically just showed that it was important to us,” Tinkle said. “And I’m not sure that it was in the first half or some other games in the past.”

Maurice Calloo played a big part in that late stretch, scoring eight points in a 15-3 run that gave OSU its first lead since the opening minutes of the game. He later added what turned out to be a game-clinching 3-pointer with 40 seconds left to put his team ahead 68-63.

Calloo, a junior forward in his first year in the program, has struggled to learn a new system but came through in the clutch to help the Beavers get a third straight win.

“It was really good. Hats off to my teammates for helping me and everybody sticking together through the ups and downs,” Calloo said.

Oregon State was without senior center Roman Silva, who started six of the team’s first seven games, due to COVID-19 test results and contact tracing protocols. With Silva out, junior forward Rodrigue Andela, in his first year with the program, made his first start.

Absent from the Beaver bench due to test results and protocols were associate head coach Kerry Rupp and assistant coaches Marlon Stewart and Stephen Thompson.

That left Tinkle with director of basketball operations Joey Petschl, director of player personnel Tyler Copp and graduate assistant and video director Seth Yates to help him on the bench.

For those reasons, Tinkle said it was an emotional week.

“We asked our guys to come out and really have each other’s backs. No excuses, no explanations, to show what we’re made of,” the coach said.

It didn’t hurt that Cal had to play the last 23-plus minutes without junior guard Matt Bradley, the Bears’ best player and the team’s leading scorer the past two seasons.

Bradley fell to the floor with 3:31 left in the first half and remained there for several minutes, holding his head after apparently aggravating an ankle injury. Bradley was helped to his feet and with assistance made it back to the Bears’ bench. He was on crutches and had a protective boot on his lower left leg after the game.

Ethan Thompson had a team-high 16 points and five assists for the Beavers, who will play last Thursday’s postponed game against Stanford at noon Monday at Gill.

Calloo scored all 14 of his points in the second half on 5-of-7 shooting with three 3-pointers.

“We know what Mo can do. We seem him every day in practice,” teammate Gianni Hunt said. “So seeing him be able to break that funk and get back into the rhythm that we know he has, it was good.”

The Bears left a lot of points at the free-throw line, shooting 14 of 28 there, including 7 of 16 after halftime. As a team, they were at 68.6% for the season coming into the game. Big man Lars Thiemann was just 3 of 11.

“We know they’ve got it in them and we vowed after the game to make sure we strive to play as close to 40 minutes that way every game moving forward,” Tinkle said. “It was the guys. They responded.”

The coach called a quick timeout less than two minutes into the second half after not seeing what he expected from his squad.

Soon, the Beavers finally found some traction with the help of a little added defensive pressure and better ball movement.

Hunt had five points in a 9-0 OSU run that saw the Beavers close within two.

Andela found Warith Alatishe for a transition layin with 15:17 left that made it 41-39 Cal.

Oregon State got within two three more times in the next three-plus minutes, the last at 48-46 on two Jarod Lucas free throws with 12:01 remaining.

Andela had the first five points — plus a block to force a shot-clock violation — and Calloo provided most of the rest of the offense in the 15-3 run that put the Beavers ahead for good.

“Offensively, they thought more about the team than themselves. It was amazing to see when we execute plays and make the right reads,” Tinkle said. “Shots go in and we’re aggressive on the glass, and we start thinking about each other, and that carries over to the defensive end as well. It’s not a coincidence that those things go hand in hand, so credit again to the guys.”

Lessons are always more easily learned when the result is a win instead of a loss.

The year 2020 was a new adventure for journalists, sportswriters included. There were no games, meets or tournaments on our regular beats, whi…

OSU men's basketball: Beavers learning from mistakes; Stanford up next

Not much has come easy for Oregon State men’s basketball this season.

OSU men's basketball: A look at the opponent — Stanford

Oregon State hosts Stanford on Monday afternoon in a rescheduled men’s basketball game at Gill Coliseum. Here’s a look at the Cardinal.

OSU men's basketball: da Silva, Stanford too much for Beavers

Oregon State had a chance to finish off a fourth straight game with a second-half comeback win, but it wasn’t to be this time.

OSU men's basketball: Program on pause due to COVID-19 test results and protocols

Oregon State's Maurice Calloo came on strong in the second half to spark the Beavers to a 73-64 victory over California on Saturday. Calloo finished with 14 points for the Beavers.

The Beavers were able to make some big stops on defense as well as putting together some good offense in the win against California.

Oregon State's Ethan Thompson leads a fast break in the first half of the Beavers' win against Cal. Thompson finished with 16 points and five assists.