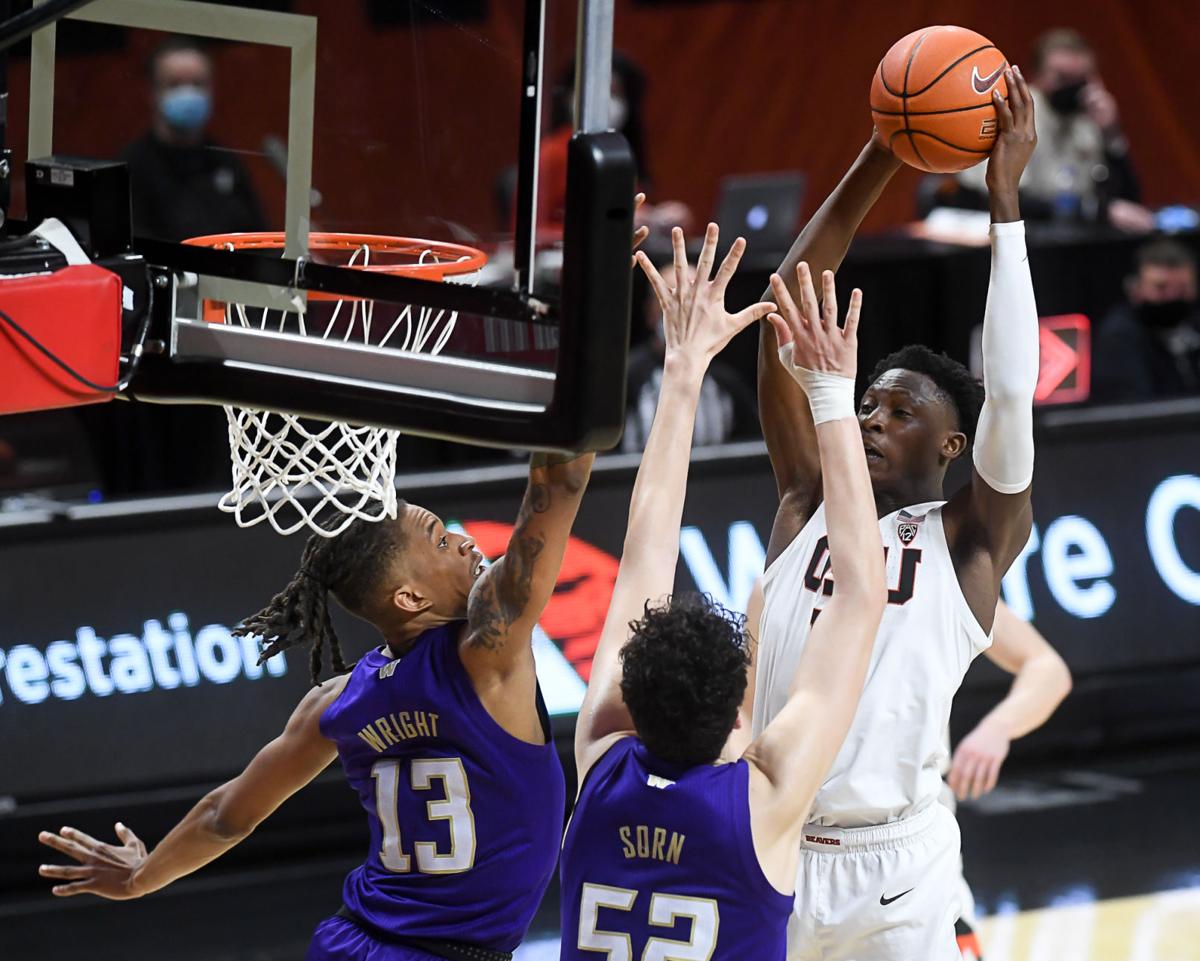 Oregon State's Warith Alatishe scored 15 points and grabbed 11 rebounds and was part of the Beavers' balanced scoring effort in the 91-71 victory over Washington on Thursday evening. 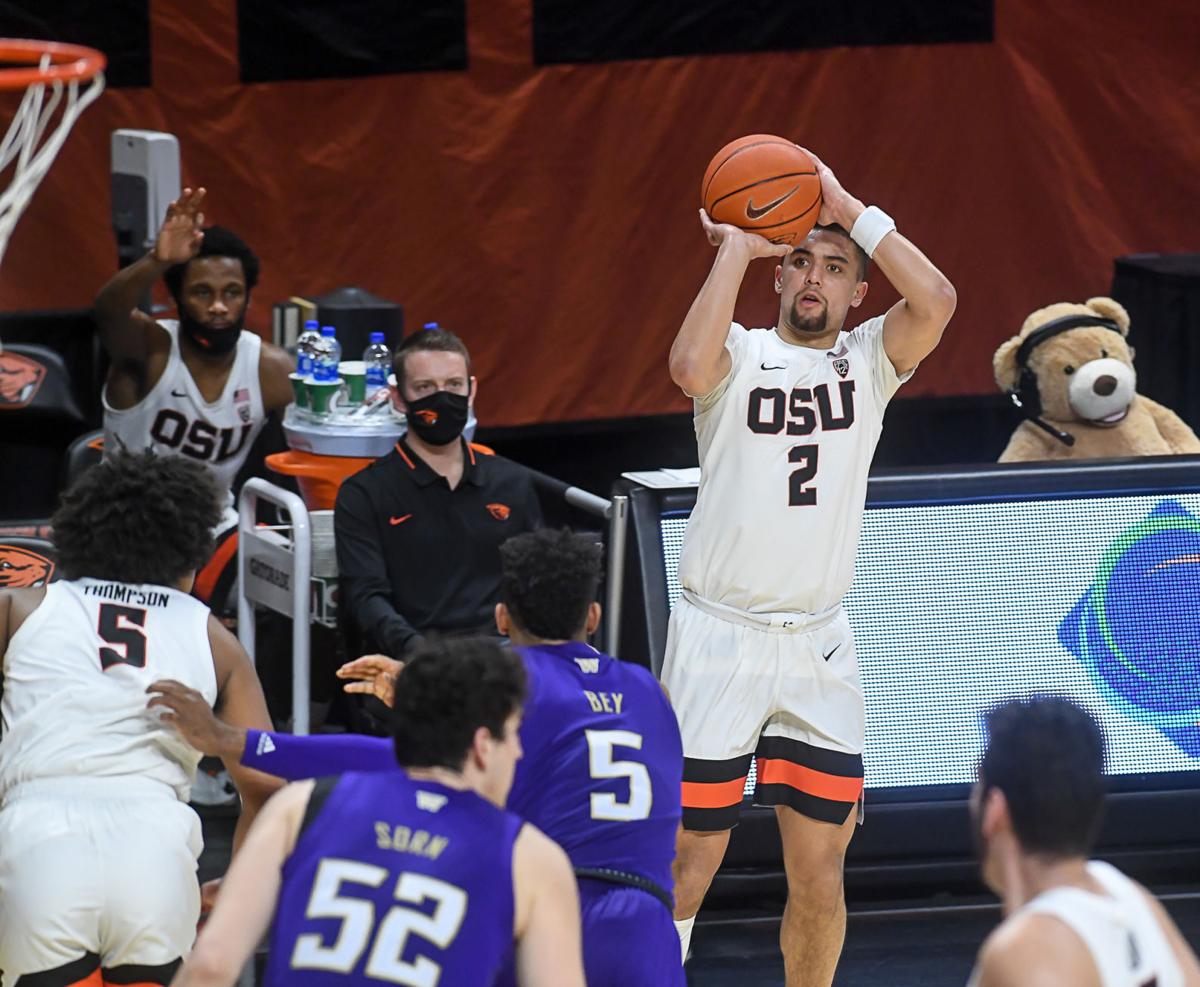 Oregon State has grown tired of its slow offensive starts and having to play from behind too many times in conference play.

The Beavers didn’t allow that to happen Thursday night and instead turned the table against Washington and fended off every run the Huskies had to throw at them.

Fueled by strong shooting and productive offense, OSU jumped out to a 21-6 lead in the first six-plus minutes and never trailed in a 91-71 win in a Pac-12 men’s basketball game at Gill Coliseum.

The balanced scoring effort to open the game was echoed in the final box score, as all five starters scored in double figures and combined to shoot 29 of 53.

But maybe an even bigger number was the 25 assists, led by Zach Reichle’s eight and fellow senior Ethan Thompson’s seven to just five turnovers. The team assists were a season high outside the early blowout victory against Northwest University and the team turnovers were a season low.

Reichle said himself and others have at times tried to help the team out of a slump by taking on much of the offensive load when spreading that load, as it was Thursday, is really the answer.

“I think we have so many weapons that we just play off each other and they can’t defend us all at one time. I think we did a great job of sharing the ball tonight,” Reichle said.

Returning to the starting lineup, senior center Roman Silva had 14 points on 6-of-7 shooting.

Silva said the fast start to the game was a result of a “great scouting report” from the coaches.

“They put it in and everything that was on there is what happened,” he said. “The starting five really dug in there and executed.”

Beavers coach Wayne Tinkle said the assist-to-turnover ratio was “big time” and credited his players for responding with a win he said they have to have after getting swept at USC and UCLA last week.

“We just went into the game with the mindset of moving the ball, moving yourselves and sharing it” as well as getting the ball inside, he said, adding that his team is learning the lessons that cost OSU wins early in the season.

“When we throw it inside, when we have movement, when we have spacing, when we think ‘share it,’ that’s when were at our best offensively. The guys accepted the challenge and did a great job with those things.

Portland product Marcus Tsohonis led Washington, which shot 23 of 51 (45.1%) with 22 points and four rebounds. The Beavers held Huskies guard Quade Green, the team’s leading scorer, to two points on 1-of-7 shooting in 30 minutes.

Oregon State kept its offensive production at a high level to open the second half, extending a 12-point halftime lead to 20 in three-plus minutes.

Alatishe hit a jump hook in the key, Lucas a 3-pointer and Silva a layin.

Washington had an opportunity to get back in the game when Oregon State was whistled for its seventh team foul of the second half with 13:41 remaining. The Huskies had just two personals at that point and were down 20.

It wasn’t OSU’s fouls but rather the Beavers’ stagnant offense that gave Washington a chance.

The Huskies reeled off nine straight, cutting it to 12 on a Cole Bajema steal and dunk followed by a Nate Roberts layin with 8:15 remaining.

The Beavers were shooting 2 of 11 before Lucas found the net on a deep 3-pointer to give the home team some breathing room.

That started a 9-0 run, with Silva converting a conventional three-point play and Thompson hitting another corner 3 to push the lead back to 21.

Washington would get no closer than 16 from there.

Producing a rare quick start, Oregon State opened the game making its first four shots and 8 of 10 to lead 21-6 on Alatishe’s steal and fastbreak basket.

Thompson had two 3-pointers in the opening six-plus minutes, including one he turned into a four-point play. Alatishe was active with six early points.

Washington started 3 of 8 from the floor but made three straight 3-pointers – two by Tsohonis – in 61 seconds to pull within 21-15. Stevenson added a reverse layin in transition to cut it to four.

The teams traded scores before the Huskies got five straight points to close within three.

But the Beavers controlled the rest of the half, outscoring the visitors 18-9 in the final six minutes.

Reichle got all 10 of his first-half points in that stretch, with a 3-pointer, a transition layin and five free throws. Lucas capped a 17-5 OSU run with another 3 for a 46-31 lead.

Oregon State played the last 7:42 of the half without Thompson, its leading scorer, after he picked up his second foul. The Beavers led by six at the time and doubled their lead by the break.

OSU men's basketball: A look at the opponent — Washington

Oregon State and Washington meet Thursday night at Gill Coliseum for their only regular-season game of the season. Here’s a look at the Huskies.

OSU men's basketball: Lucas finds defense is the key to a bigger role

In a word used by Jarod Lucas and his coach Wayne Tinkle, Lucas was a “liability” on defense last season and it limited his floor time when th…

Time is running out if Pac-12 men’s basketball is to get all its regular-season games played.

The opportunities were there for Oregon State to pull off the upset Saturday afternoon.

Roman Silva continues to give Oregon State a low-post, back-to-the-basket presence with a scoring punch that the Beavers haven’t previously ha…

Oregon State's Warith Alatishe scored 15 points and grabbed 11 rebounds and was part of the Beavers' balanced scoring effort in the 91-71 victory over Washington on Thursday evening.