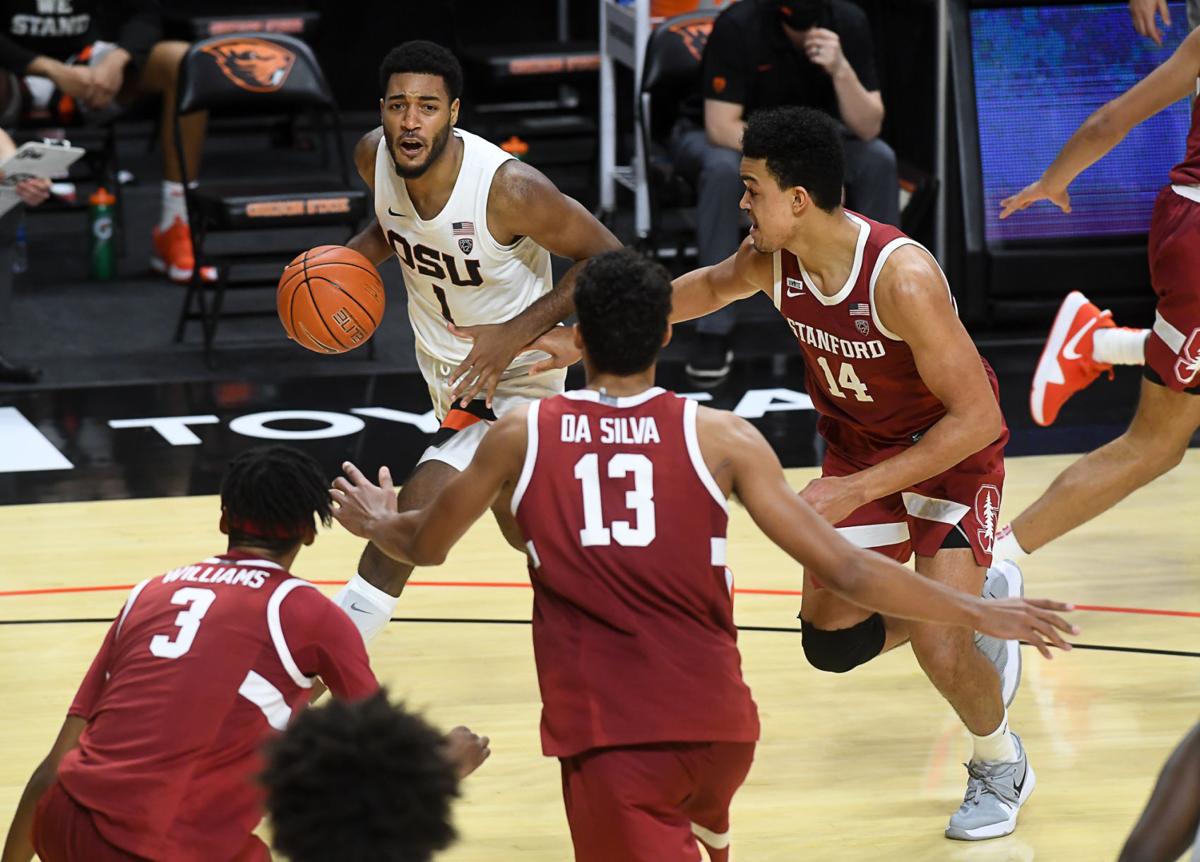 Maurice Calloo and the Beavers are back on the court after a seven-day pause due to COVID-19 test results and protocols. 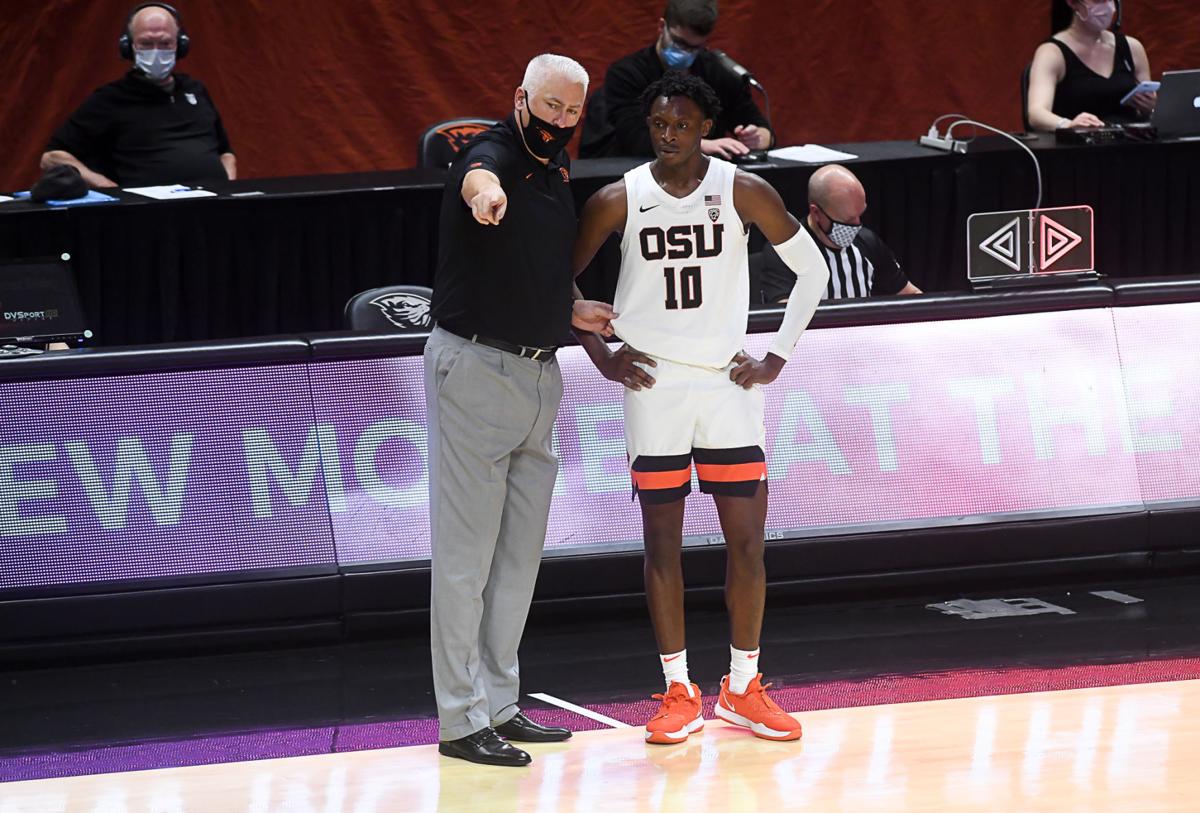 Coach Wayne Tinkle, left, Warith Alatishe and Oregon State will play their first game in 10 days Thursday when the Beavers host Arizona. Road games at Utah and Colorado last week were postponed due to COVID-19 test results and protocols in the OSU program.

Oregon State men’s basketball got back to the court for practice Tuesday after a seven-day pause and will host Arizona on Thursday night barring any more setbacks.

COVID-19 test results and protocols in the OSU program resulted in last week’s conference games at Utah and Colorado being postponed and had all but five Beavers players in isolation for the past week after the Jan. 4 home game against Stanford.

“We’re not alone though. That’s the message we’ve been sending to our guys, is we’ve got to deal with what’s in front of us,” OSU coach Wayne Tinkle said Tuesday via a video conference with media.

Another message, delivered since the onset of the pandemic, has been that the teams that handle the adverse situations the best and stay together will have success. That will be the challenge and a focus for Oregon State moving forward.

Tinkle said he wasn’t excited about having just two practices to prepare for a game after having a week off, a situation no other Pac-12 men’s basketball team has attempted to date. But he says he’s “happy with the opportunity to play.”

More practices would have allowed time to ensure his available players were mentally and physically ready.

“We’ll be close. We’ve got a lot of bodies still,” Tinkle said. “We’ll be missing a guy or two, but we’ll be ready to go when that thing goes in the air.”

The break from team activities gave the coaching staff time to reassess the Beavers’ (5-4, 1-2) progress in the seven weeks since playing their first game.

The coaches saw what Tinkle has said repeatedly after games and has been passed on to the players during practice and film sessions: some of the same mistakes and problems are cropping up in losses. The Beavers have had second-half leads in all of their defeats.

“We’ve got to get better at finishing,” Tinkle said. “It’s discipline, it’s effort, it’s having each other’s backs defensively then continuing to do what’s working offensively.”

It’s breakdowns in those areas that have cost Oregon State games.

The coach said his team needs to fight through it, be tougher and be a more cohesive unit for longer stretches.

The coach points to a lack of maturity and experience. He says improvement is being made but that consistency is still lagging behind.

Junior forward Rodrigue Andela, who left the Stanford game with an apparent foot injury, tested it briefly Monday and didn’t practice Tuesday. Tinkle said Tuesday that it was “too early to tell” if Andela will make it back for Thursday.

Senior center Roman Silva, who missed the team’s last games due to testing results and protocols, is “working himself back in” and wasn’t able to participate in any full-court drills Tuesday, Tinkle said.

“The theme has been no excuses, no explanations. We roll with what we have and we throw our best shot out there. So that’s what we’re going to continue to do,” the coach said. “It is what it is. We’ve got to get games in and we’ll make sure whoever we’ve got rolling into Thursday is prepared, then they’ve got to go out there and get after it for us.”

Oregon State will have its three assistant coaches — associate head coach Kerry Rupp, Marlon Stewart and Stephen Thompson — back on the bench after missing the last two games following a positive test by one of the coaches, Tinkle said.

Tinkle addressed player concerns after that positive test and said that Tuesday was a little like the first day back after the result with some “uneasiness.” But the players were assured that the safety protocols in place at Oregon State “are as good as anywhere,” Tinkle said.

“Still, you’ve got to imagine being 18 to 22 years old, away from home, dealing with some of these things,” he said. “I’ll admit it, there’s probably been times that that’s weighed on some guys more than others and it’s hurt us. It’s hard to try to wash that out of them with all that they’ve gone through.”

But, he added, the team has no choice but to “keep positive, stay together and keep grinding to fight through these tough times that we’re going through right now.”

The Beavers have had four conference games postponed in all and been able to reschedule one of those (Stanford).

Tinkle said he’s confident that his team’s postponed home game with USC — originally scheduled for Dec. 20 — will be made up next week. That likely means Monday or Tuesday given the Trojans play at Stanford next Thursday, Jan. 21.

He also said there are plans being made to reschedule last week’s games during the second half of the Pac-12’s 20-game conference schedule.

It’s only taken three weeks, but there’s already separation being created in the Pac-12 men’s basketball standings as the top teams begin to m…

OSU men's basketball: Program on pause due to COVID-19 test results and protocols

OSU men's basketball: da Silva, Stanford too much for Beavers

Oregon State had a chance to finish off a fourth straight game with a second-half comeback win, but it wasn’t to be this time.

Pac-12 men's basketball: A look at the opponent — Arizona

Arizona comes to Gill Coliseum on Thursday night for a Pac-12 men’s basketball game with Oregon State. Here’s a look at the Wildcats.

Maurice Calloo and the Beavers are back on the court after a seven-day pause due to COVID-19 test results and protocols.

Coach Wayne Tinkle, left, Warith Alatishe and Oregon State will play their first game in 10 days Thursday when the Beavers host Arizona. Road games at Utah and Colorado last week were postponed due to COVID-19 test results and protocols in the OSU program.