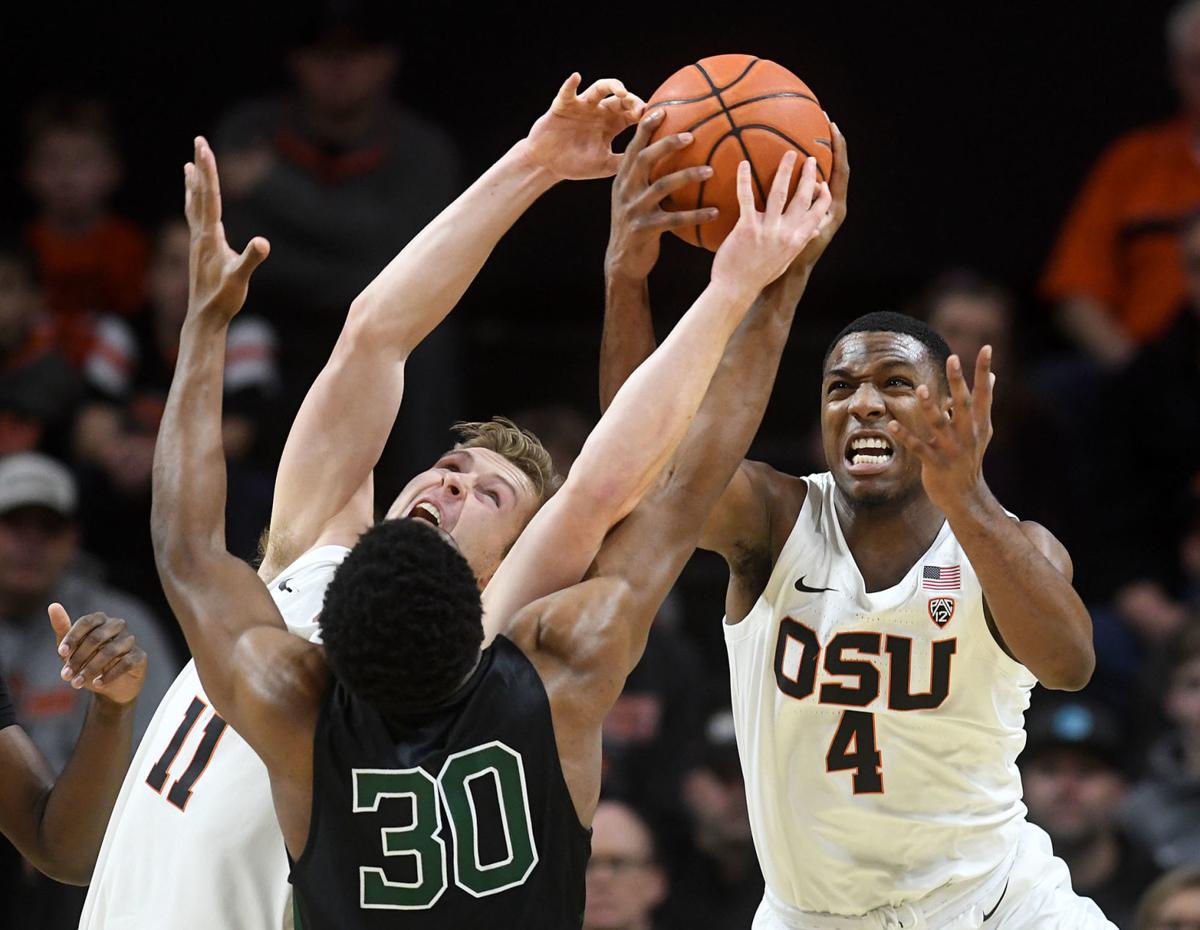 Oregon State's Alfred Hollins (4) and Zach Reichle (11) fight for a loose ball with Portland State's Chris Whitaker. The Beavers won a fight to the end with an 81-76 victory on Sunday afternoon. 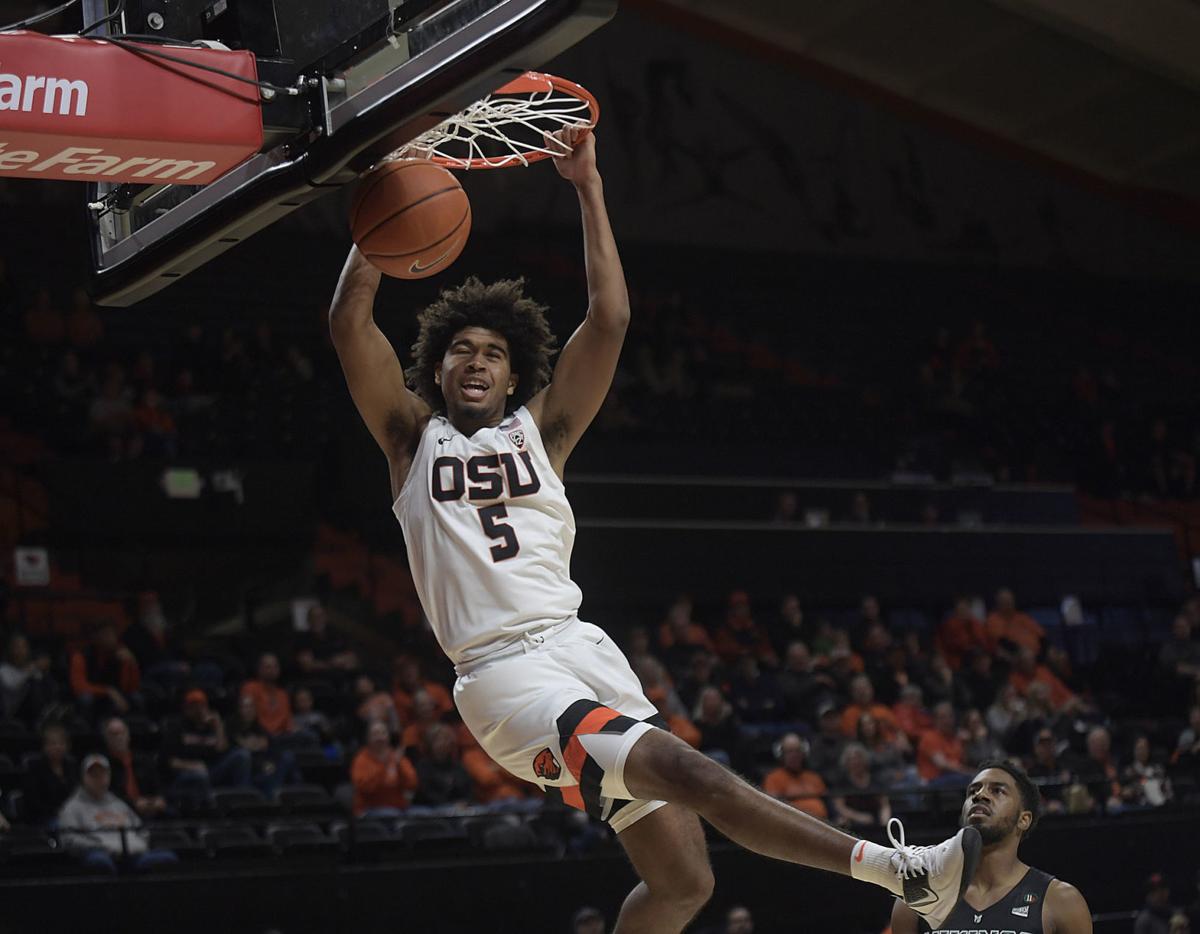 Oregon State's Ethan Thompson dunks for two of his 18 points against Portland State.

Athletes and coaches alike say lessons are easier learned when the end result is a win instead of a loss.

The Beavers won their fifth straight game to improve to 7-1 overall, but it wasn’t easy. A 19-point second-half lead shrunk all the way to four in the final minute. The determined Vikings (3-5) ran out of time.

“Obviously there’s some disappointment,” OSU coach Wayne Tinkle said. “I think it’s much more give credit to Portland State than our guys just struggling. Our guys don’t look past anybody. So I don’t think that’s an excuse at all. We had a chance, I felt, to knock them out in the first half and we didn’t. That gave them confidence that they were in it and credit, they made plays.”

Tinkle said he had some players who weren’t ready to match PSU’s aggressive, physical style, but the coach was happy that it didn’t cost his team with a defeat.

The Beavers weren’t physical enough defending the ball, in defensive rebounding or in finishing offensive plays at the basket, the coach said.

Tinkle made five 3-pointers (on seven attempts), the second time this season he's made as many as five long balls. The senior forward is now shooting 54% overall and 47.5 on 3s this season.

PSU’s Holland Woods had 23 points, including 18 in the second half, and seven rebounds.

“In years past we would have let something like that slip. Frustration when a team has a run like that. But we pulled together enough to pull out the win,” Tres Tinkle said. “I think it’s going to be a good thing for us looking back. Make sure we’re taking care of the ball and finishing plays and doing all those little things in crunch time that win games.”

Oregon State looked to be in full control after Tinkle scored off an inbounds play to give the Beavers a 69-54 lead with 8:07 left.

The Beavers were up 11 after Thompson found himself surrounded by defenders in the key but elevated to put the ball in the hoop with 2:08 remaining.

But Portland State kept coming in a game in which Oregon State had problems with turnovers and missing from point-blank distance. The Vikings scored the next six points, climbing within 80-76 on a short jumper by Woods with 19 seconds left.

That was all the underdogs could muster. OSU’s Gianni Hunt made one of two free throws with 14 seconds to go to finish the scoring.

The Beavers came through some adversity.

“We went through it with a lot of different lineups in that game and a lot of young players got good experience,” Thompson said.

Oregon State had freshman guards Hunt and Jarod Lucas on the floor in the closing minutes. Both have shown early in the season an ability to handle the pressure of being put in the spotlight of major college basketball.

Hunt had five points, five rebounds and two assists in a season-best 22-plus minutes. Lucas added five points and a rebound in nearly 14 minutes.

“It’s big, it’s great experience for them. I was proud of them,” coach Tinkle said. “Obviously we had the confidence to have them out there because we weren’t getting responses from some other guys we were hoping to. Gianni made a free throw when we had some veteran guys miss some. So I think that’s going to pay some big dividends for us down the road.”

OSU went with smaller lineups to match PSU’s lack of size. The Vikings have no player taller than 6-foot-9. Dearon Tucker was the only Beavers big man to come off the bench, playing one minute in the second half.

OSU 7-footer Kylor Kelley had six blocks — giving him 23 in the past four contests — but just two points on 1-of-4 shooting and three rebounds.

Oregon State’s Sean Miller-Moore scored six points while making all three field goal attempts in his first four minutes off the bench early in the game. His first shot was a layin, and soon after he drew an offensive charge on the other end.

Tres Tinkle later hit Miller-Moore for consecutive baskets, the second for a transition dunk after Tinkle knocked the ball away for a steal. That started a 13-2 run that Thompson finished with a transition dunk off a Hunt pass and a layin to put the Beavers ahead 27-18.

OSU would go up 10 before Portland State got the deficit down to three. But a 6-0 Beavers run late in the half, including a Tinkle 3-pointer, helped the Beavers to a 41-34 halftime lead.

Reichle scored four in Oregon State’s 7-0 run to start the second half. Thompson’s short baseline jumper pushed the lead to 19 the first of two times before the Vikings started the comeback.

Because of a school rule eliminating competition during the upcoming dead week and finals except on weekends, the Beavers don’t play against until hosting Arkansas-Pine Bluff on Dec. 14.

Coach Tinkle said the program couldn’t find an opponent to play on the available dates next weekend, giving the Beavers a 13th nonconference game.

“Not ideal, but we’ll find a way to make it a positive for sure,” he said, adding that hopefully it changes next year when the Pac-12 Conference schedule goes from 18 to 20 games, leading to conference games being played earlier. “Because our schedule is really squeezed in as it is and to not be able to play for two weeks is tough, so that’s something we’ve got to figure out here for sure.”

Get the latest Beaver sports news in your inbox

Delivered 3x a week directly to you!

Oregon State's Alfred Hollins (4) and Zach Reichle (11) fight for a loose ball with Portland State's Chris Whitaker. The Beavers won a fight to the end with an 81-76 victory on Sunday afternoon.

Oregon State's Ethan Thompson dunks for two of his 18 points against Portland State.